Picking up the Pieces

If you hadn't seen the previous post yet, the gas engine was started for the first time, but during the process the vehicle was damaged.

Afterwards, I took an assessment of the damage to Goliath and tried to figure out where things went wrong. 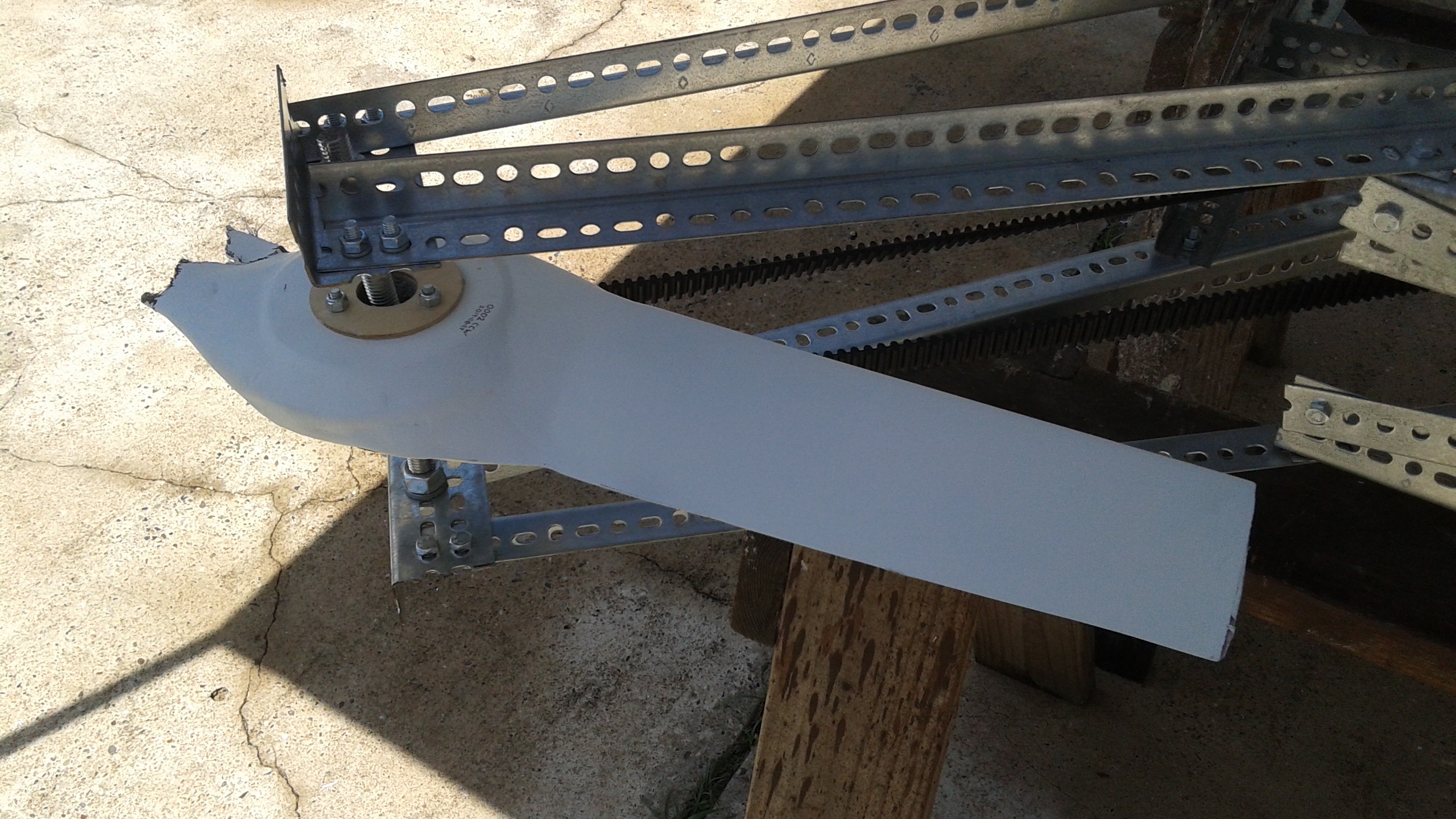 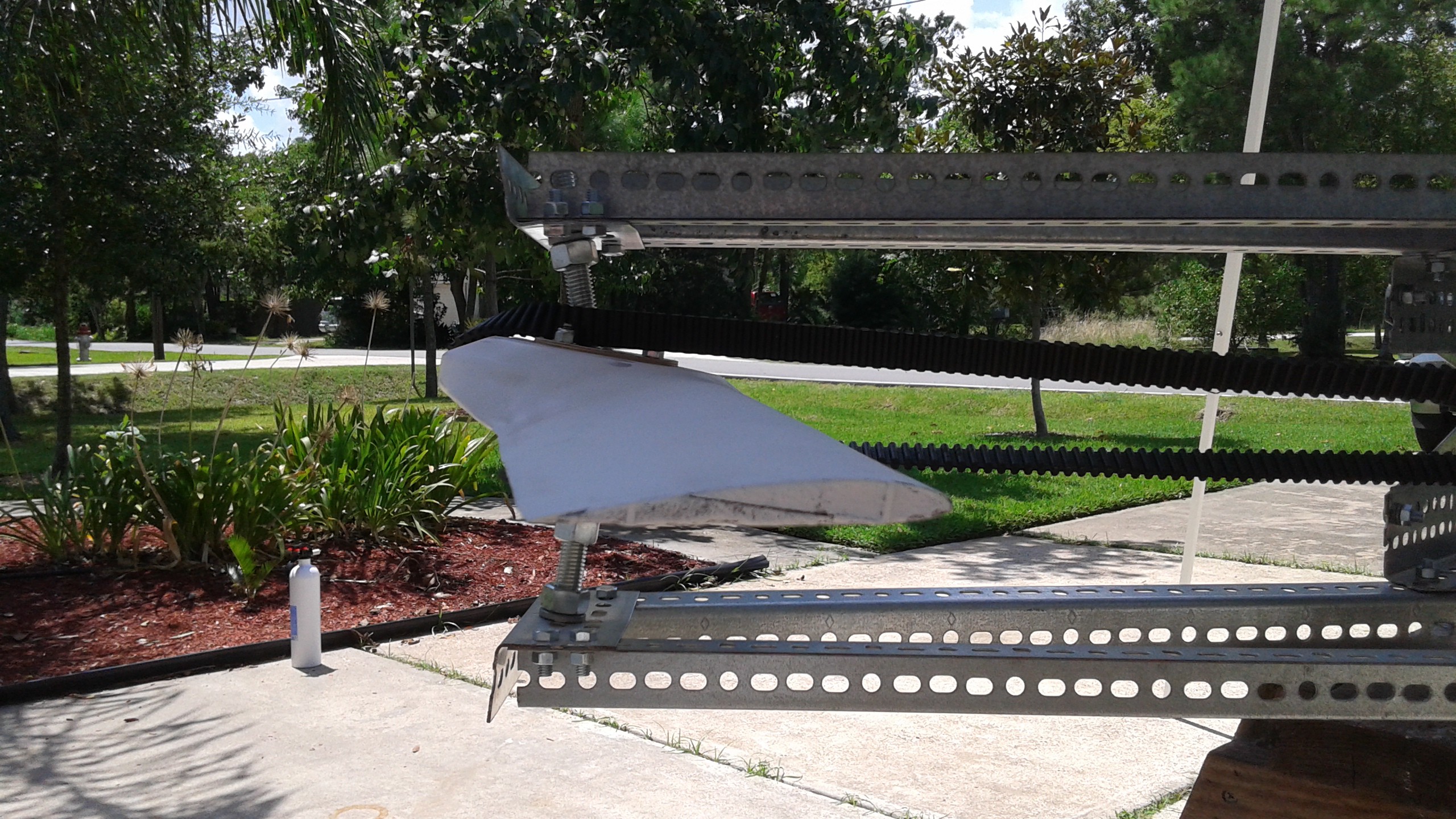 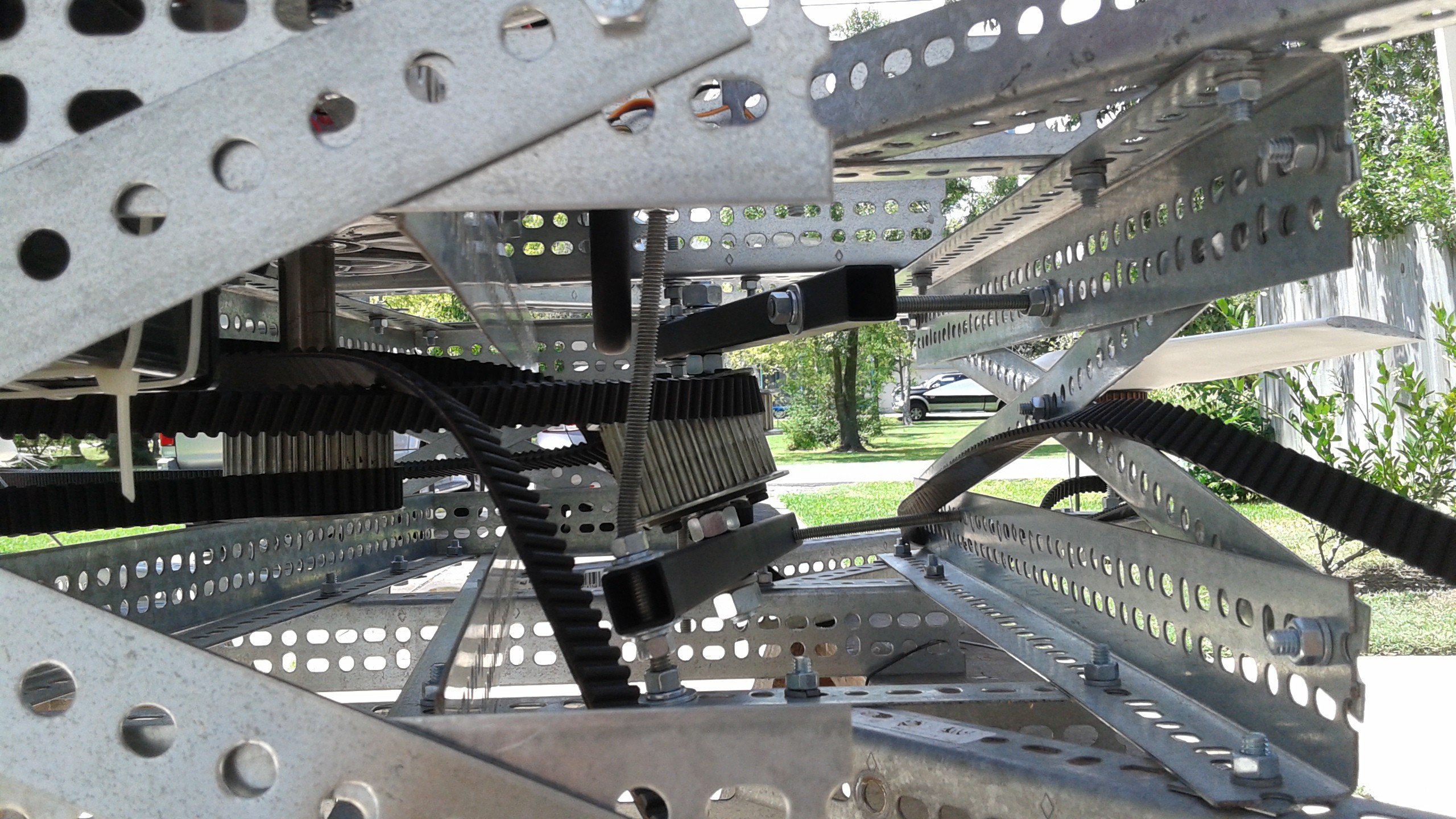 After watching the video a few times and looking at the damage to the vehicle, I think I have a good idea of what went wrong and what I can do to prevent it from happening.  Things were running good until the engine was shutoff.  At this point one of the belt started losing tension.  You can see this in the video at the lower right hand belt starts to flap.  This was likely do the the engine spinning down faster than the belt.  At some point the belt gets so much slack, that the belt bounced up and the propeller went under it and the belt got wrapped around the prop.  Once it was tangled the belt cinched up really tight and bent two of the propeller shafts and the belt tensioner support.  The other propeller attached to the belt was sheared off when it's axle was bent and the propeller hit the angle iron support.

The changes I need to make to the vehicle to keep this from occurring again are:

I may also need to add some auto tensioners, I need to do a bit more research into it.

Otherwise the test went well.  We could really feel the wind coming off the vehicle.  I'm really amazed that the belts are as strong as they are. I would have thought that the belt would have snapped in this situation. I've already started on making two new propellers and hopefully the process will go faster now that I've done it a few times.

I can understand what you mean regarding the pwr/weight as I hadn't worked out the calcs before the suggestion. Further these motors are not known for their high level of torque. However the fundamental drive system, independent of the motors themselves I still find interesting with the flex shaft. I know you have a great deal more experience than I do on this, but my experience with belts is that in addition to having a point/cam where you can vary the torsion/tension on each drive you have to have an 'equal or opposite' [Oh, Evil though devoted, Newton] force to compensate for any slack that may occur.

Given that you have a central drive shaft, I can at least imagine a setup where you might have four such staggered pillars driving a movable flex chain directed to each rotor (rather than the belt system).

At the same time, despite my suggestions (where the homepage said to 'encourage and advise'), I can imagine some degree of frustration in being openly 'high-lighted' -- after all, I don't believe I saw any green-lighted project that involved the 'photolithographic process', or designing and casting one's own custom ASIC or IC.

To be honest, that is partly what I love about the imagination of silicon-- for one, it is so 'cheap' and combinatorial-- where as you may not still agree (nor I am not asking you to) about the general design I suggested [which, after all, is but a simple extension of the conventional] , but obviously neither you nor I can spare the expense of the cost of casting a 'custom motor' for said application, which I think really is probably what is needed (imagine an application where rather than simply the drive shaft flew in one direction--imagine an application where rather than simply the single piston flew 'North/South' for rotational motion, it traversed around a center to produce East, West, North, South-- Mounted horizontally if you will. With the right controller, reasonably you could vary the amount of gas introduced into each respective cylinder (within limits before you lost total balance on the system) could be varied to produce differential effects.

Obviously, even still, you'd only have a sort of 'helicopter' and not a true 'quad-copter'. But if one could re-design the outer engines to custom specs...

When I mentioned the idea first to a friend, he honestly espoused the virtues of Li-Po over gas, though even by virtue of 'sight' alone, looking at the revealed 'Tesla' battery pack... I guess we know who makes there money doing what [it uses a lot of gas], but it takes innovators to, at the same time try to push the self/same envelope.

I can relate though, in many respects, we are all one idea, one hope.

Though I understand, at this point, you are somewhat heavily invested in this particular motor/concept of design, after considering the matter for awhile I wondered whether there might be a better route to take (though requiring some substantial redesign).

In my thinking, if I were to design a gas quad-copter-- for one, yes, you need an engine that is sizeable and can provide a sufficient amount of thrust to overcome the copter's initial inertia itself-- though at the same time your need fast, responsive, and independent control of the rotor speed at each of the four axis (or otherwise you have more a 'helicopter' than 'quad-copter').

I am sure there is a way to do it with your design, but for me, given you are dealing with both high speeds on the belt and variable tensions/torque-- I honestly would not know where to start in this regard.

Instead, this is my thought-- Why not use four identical (for the sake of weight balance) weedwacker motors instead, one placed on each of the four points of the rotor? For one, these motors are geared towards high speed circumferential force. Second, most have a built in clutch-- Crucial, I would think, both in variable wind conditions, and in the case something 'goes wrong'. Third, almost all models have a rather quite sensitive level of variable throttle control-- in contrast to any motor on any mower of someone's lawn I've ever mowed ;).

However, there would still be a number of potential issues I can see even with this suggested design:

For one the increased degrees of freedom on each rotor (plus clutching), means a substantially more complex/faster/more responsive MCU design.
Second, while these motors offer fine throttle control they are distinctly 'analog', in most cases using a short cable pull. Rather than dealing with the cable I wonder if you could affix a small, fast servo directly to the rotation point on the throttle value, which might give you the response you want.

Third, there is no built in system of 'feedback' as to how the motor is actually performing (or actual RPM at the rotor), which is crucial given the built-in clutch. So you have so have some form of rotational encoder (or with your present design I would greatly encourage this also) to be able to compensate between desired and actual forces, and provide balance. Of course both the chips and the dual led encoders that can read at high detail/speed can get quite, quite expensive, you might make some trade off by implementing a very 'low-level' encoder, such as utilizing a 'photointerrupter' with a custom made disk to provide you with at least 'some' feedback as to how the motor is performing.

Fourth and finally, even with the present design, fuel could be a major issue, both because the change in weight shifts the center of gravity, plus any angled maneuvers might starve the gas line. In this regard, either with the center mount motor design, or with the 'weed wacker' style motors at each of the rotors, I'd remove the individual gas tanks and feed lines into the center of the device and mount the gas tank there. Further, rather than using a 'tank', I would use some form of vacuumable bag.

In a pinch, invite a bunch of friends over and go through a case of 'Franzia' in the evening, and in the morning empty out what's left, find a new attachment mechanism for the lines, and when you fill it with gas, ensure there is no air left in the bag. This might solve both weight balance as well as possible 'starvation' issues when performing complicated maneuvers. Imagine going upside-down with a standard (and 1/2 filled !) tank! This kind of air is neither of our friends.

Hope some of this helps or inspires you a bit-- You're in the ranks of the 'big-game' now.

Peter McCloud wrote 09/09/2014 at 23:51 • point
Thanks Anthony for the feedback. I had initially looked at using seperate motors for each hub. However Power to Weight ratio does not scale with size. Four 7.5 Hp motors are way heavier than one 30 Hp motor. At a future point I do plan on getting a tach for the four rotors and providing a feedback mechanism. As for the fuel, Goliath won't have the range of mobility of an electronic quadcopter, so I shouldn't have to worry about fuel starvation for now and I do plan on getting the tank as close to the c.g. as possible for stability. Thanks again for the feedback and I'll be sure to keep it in mind.

Josh wrote 09/05/2014 at 16:53 • point
The clutch will still allow the belt tension to change. The flapping belt is actually due to first order vibration- like a guitar string. Belt tension only controls the amplitude of the vibration - unsupported distance and elasticity of the belt drives the harmonic frequency.

To correct this you should put an idler pulley perpendicular to the drive pulleys (shaft horizontal) 1/3 of the distance between the drive and blade pulleys that barely touches the belt. This prevents both 1st and 2nd order vibrations from manifesting.

Peter McCloud wrote 09/09/2014 at 23:45 • point
Thanks Smerfj for the link. I had read this previously, but had forgotten it mostly since it's been over a year. It was good to read up on it and I think I'm going to make some adjustments and do some testing on this.