A device to monitor the progress of fermentation
(pH, specific gravity, alcohol, temperature)

Zymeter is a device to monitor the progress of fermentation, in order to continuously monitor the alcohol content of your beer (as well as other parameters) and predict when fermentation will likely finish.

The design will be completely open source, with the goal of making it easier for people to monitor their beer.

The project schematic/software/design etc. will all be licensed under the Creative Commons CC0 licence - meaning you can do what you want with it!

You may wonder why you'd want to create a digital hydrometer rather than simply using a glass hydrometer.

A glass hydrometer is a device which has a number of markings on, indicating the specific gravity and also is specially weighted.  It floats in your beer, you take a reading where the top marking is next to the beer line.  The problem with such a device is that you can't take readings continuously with it - unless you fancy sitting monitoring your beer all day long ;).

You can see in the photo (the one with the bucket and wooden frame) my original idea, using a load cell (which measures force).  I had numerous issues with this approach due to 'creep' from the load cell over time.

I'm now working on a vastly different approach using an ultrasonic transducer in order to measure the specific gravity - this is shown in the diagram below.

A single pulse of a sine wave will be generated and converted to analog.  This will then be fed through an amplifier to an ultrasound transducer.   The pulse will penetrate the beer and hit the opposite side of  the chamber.  The pulse will be reflected back towards the transducer, were it will be picked up by the ADC.

The ADC will be constantly running at 100MHz.  The FPGA will decode the output of the ADC, to find the difference in time, between the pulse being emitted and retrieved.  This will allow us to calculate the speed of sound in the beer along with the amplitude of the returned pulse.

By using a formula combining these values, it will be possible to determine the density and thus specific gravity of the beer (these formulae are listed in the science section below).  From this alcohol can then be deduced using a simple formulae.

Monitoring the temperature of the beer is important, as the hotter you ferment at, there will be more esters, the flavours the yeast produces.

I've been asked before why you'd want to monitor the pH during fermentation - there are a number of reasons for this. The pH of the wort changes during fermentation, especially with certain varieties of yeast/bacteria such as brett or lactobacillus. So by monitoring this you can keep a track of how acidic your beer will likely become (this is of particular importance for sour beers).

We will use the following formulae obtained from  [1] in order to calculate the density of the beer.  R dennotes acoustic impedance, which is shown how to be calculated below.

Below is the formulae for acoustic impedance:

The following diagram illustrates how pulses are recieved by the ultrasound transducer.  The transducer emits one pulse (A0) and waits for 3 more to be recieved.  The amplitudes of these three pulses is used by the above formulae to calculate acoustic impedance.  And then density can be calculated.

This technique of using 3 pulses to calculate density is known as the ABC-method.  Developed by Papadakis. 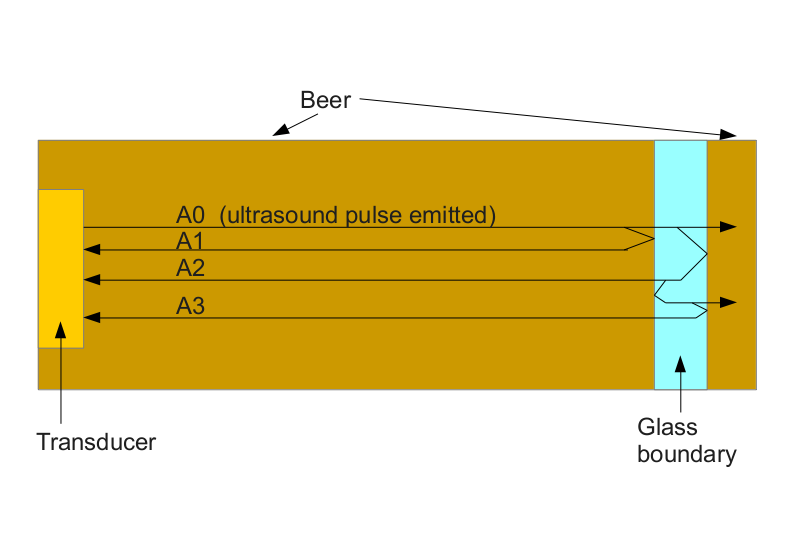 Why are you using such high frequency transmission requiring FPGA?

Have you made any more progress on this project?   how is it going?

Mike Szczys wrote 06/06/2014 at 22:54 • point
Frothy goodness-- this hack is after my own heart! I've got an Australian sparkling ale in the secondary right now.

Thanks for entering this one in The Hackaday Prize. When people thing about all the connected devices in their homes, they forget about the fermenter!

Exactly, I'd love to see a fermenter at the heart of every modern family home ;)

zakqwy wrote 05/26/2014 at 17:40 • point
Looks like a good chip for the job. In my experience, the main challenge in fermentation pH measurement deals with the electrode itself; you need something that can withstand sanitation without getting its reference system poisoned and a junction design that won't get clogged up with process debris. Ideally, you should try to get your hands on a temperature-compensated combination pH electrode that is designed for fermentation conditions (there are several manufacturers out there that specialize in these designs). Follow the storage recommendations (usually keeping the electrode immersed in 3M KCl when it's not in use) and calibrate regularly. pH probes are inherently a consumable, so don't be afraid to toss the probe once you can't get a good calibration.

Using sonic velocity of a liquid to ascertain density is certainly doable; I do a fair amount of work with clamp-on ultrasonic flow instrumentation that is capable of density determination for certain applications. Beyond the normal challenges related to ultrasonic echo processing (it's not easy to do this and get a reliable measurement), keep in mind that sonic velocity also varies dramatically based on temperature. In my experience, most folks looking for online density data accurate enough to convert over to alcohol content tend to use coriolis meters, but they certainly aren't cheap.

anfractuosity wrote 05/27/2014 at 18:47 • point
Thanks for that information. At the moment I've only got a cheap eBay pH probe, that only cost around £10, but i'll look into the temperature compensated probes you mention.

Yes you're right about temp and ultrasonic speed variance. The transducers I've got have a built in temperature probe which will be handy.

zakqwy wrote 05/25/2014 at 22:25 • point
Neat project! I've done a fair amount of online industrial pH measurement in various fermentation applications (mostly pharma stuff), so I'd love to help if you have questions.

Official Hackaday Prize Entry
This is a project to create superhuman hearing for everyone, finally we too can get annoyed by parking sensors and listen to bats!
Project Owner Contributor