Crowdfunding failed? No - it starts now!

I missed my campaign goal on Indiegogo, but finally got 333,-€ from all backers (many thanks). 5% of the money was subtracted from Indiegogo (just to feed their servers, there was no human contact), another 5% were needed to transfer the money virtually to my banking account, thus 316,35€ went to my project.

1.) Indiegogo gave the campaign no extra boost, but I simply had to try it ;-)

2.) With the small budget, the world tour robot must become smaller than the prototype. The best shipping is done in a 60x30x15cm box with no more than 2kg. That's the challenge all space missions have to deal with: Make is small and lightweight.

3.) The mission itself will be made more simple. The main idea is to have one camera on the robot - first and foremost humans want visual contact with remote areas on planet earth. I spent 30,-€ for 10 stepper motors (2 packs 5 pieces each) type 28BYJ-48 with ULN2003 driver boards that will be used as brushless drive motors and for pointing the camera up/down, eventually for more actuators.

I have a Raspberry Pi and an Arduino in stock - looks like this will be another project I have to fund (at least parts of it).

I spent 54,-€ for a smartphone that will be used to connect to Internet (either as WLAN hotspot or via USB tethering). It's my first smartphone ever. The first benefit in having such a pocket computer is an improved responsive web design. You can now use the control center also in portrait mode: 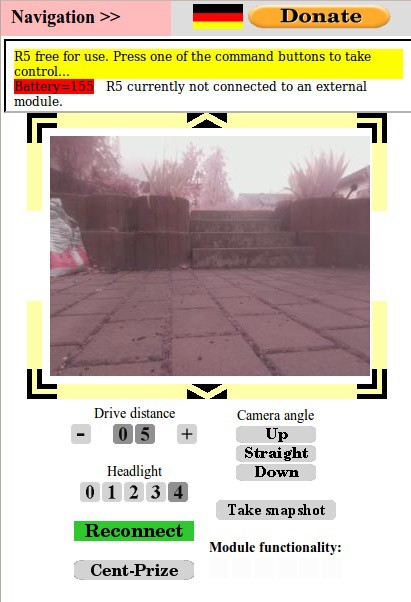 I got a MM7150 Motion Module from MICROCHIP, as a gift from the Digi-Key, because I was a winner of the digi-prize:

I will implement that sensor in R5 to see how it can be used to give the robot a better directional stability and maybe a compass.

If you'd like to back the world tour, simply add a comment when making a donation on my pages:
http://www.homofaciens.de/support-donation-main_en.htm

...and if the HackadayPrize jury likes the idea of automating globe trotting, the tour will start soon.

I will shrink the robot!