A quick update, with background data recorded from the sensor coil! 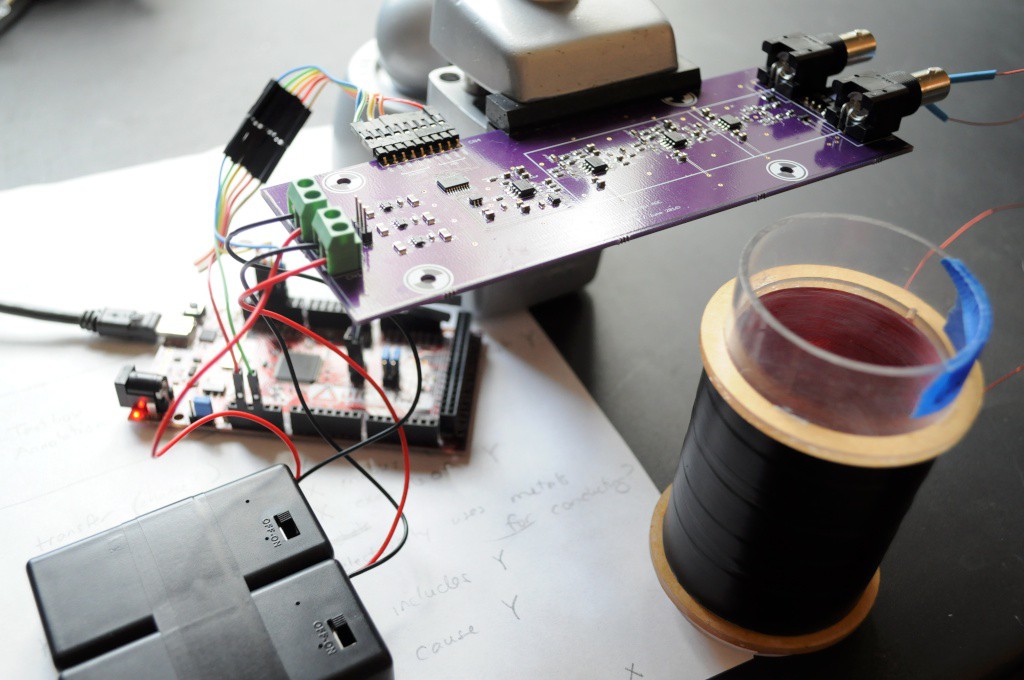 I'm still new to the Raspberry Pi, so I put together a quick AD7680 driver for the Chipkit MAX32, which contains a PIC32 processor and about 128K of RAM, or enough to hold about half a second of data at 100ksps. The chipkit reads in this data, then very slowly streams it down the serial port to an Octave script that plots both the time-domain and frequency-domain signals. Because the polarizing electromagnet isn't complete, this first test is just to observe the ambient background radio noise, and verify the amplifier is functioning correctly.

The time-domain plot (above) shows plenty of activity.

And plotting this to the frequency domain (above) shows peaks very closely matching the characteristics of the background noise that Bradley Worley observed with the PyPPM, which he speculated are largely harmonics of the 60Hz line noise, and other electrical noise emitted by nearby devices. This is a great news, and likely means that the amplifier is working as expected! A sharp rolloff is visible at approximately 1 KHz, and signal amplitude decreases quite a bit approaching 10 KHz, also suggesting that the 1-10 KHz bandpass filter is performing well. One issue did come up -- changing the AD5160 digipot doesn't appear to be changing the gain, which likely means that there may be a small soldering issue, or an issue with the driver. Thankfully the default AD5160 resistance was ideal for this test, and occupies nearly half the full-scale range -- so while it's important to have the variable gain working, this small issue wasn't critical in verifying the functionality of the amplifier.

Onward to constructing the polarizing coil, and attempting to observe the first proton precession signal!