This project needs to be monitor two temperature sensors and one pressure transmitter.

The maximum temperature can go upto 600°C. So I have two options, thermocouple or Platinum RTDs. Since the project estimated life is 20years, and for the external whether conditions, I choose PT100. Also PT100 is proven to be industrial standard.

I started working on interfacing PT100.

Referred from AD's AN709 application note.

There are three methods discussed in the note, I have tried two of them as follows:

1. The first method uses mathematical equation to derive the temperature.

The linearization equation is given as:

Solving the equation gives as: 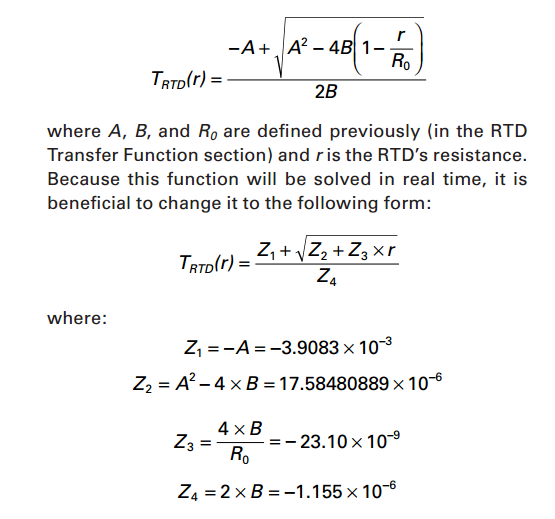 2. The second method uses lookup table for the resistance vs temperature values.

Thanks to K.C. Lee for helping me figure out this method.

All the required files are attached with the project.

Using RTD COEFFICIENT GENERATOR TOOL provided by Analog Device, we can generate the look up table and it can be incorporated in the design very easily .

So, Now I just need to find out the resistance of PT100.

For determining resistance, I used constant current source IC LM334. The circuit is as shown in following diagram. This circuit will eliminate most of the LM134's temperature coefficient.

ISET is the current through load, which is given by the equation:

To avoid self heating of the sensor the power decipation in the sensor shold be less than 0.6mW. So I will be driving 1mA of current through sensor to keep the power at 0.3mW (at 600°C).

Considering tolerance of resistance and CCS, It may not be exactly 1mA. So I will be adjusting the tolerance by calibrating in software. 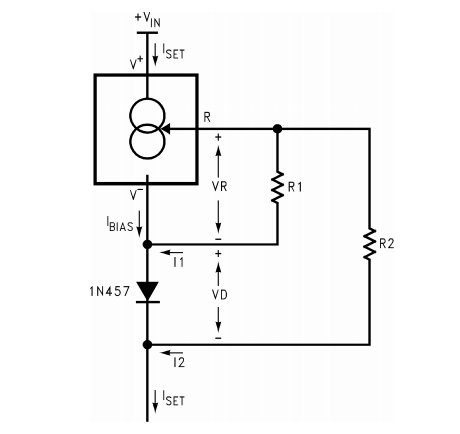 Considering, 1mA current will be flowing through PT100, and thus we can get 1mV change in volage for each 1ohm rise in resistance of sensor.

Hi Lee, Thank you very much for the input.

As i am in still development and trying out the all the things possible to choose the best one.

If I just put one resistor in series with the sensor and applies it to ADC, and I am going to use inbuilt 10 bit ADC of AVR, then resistor value needs to be very much close to the sensor value that is resistor<500 ohm for good accuracy and for more resolution then I think I will have to deal with sensor self heating problem. I plan to use a low cost constant current source IC LM334 for the same purpose. Also this CCS current does not depend on the supply voltage.

I was also referring the same the AN-709 but could not find the tool for generating the table. After your comment I searched it more deeply and found the same. I generated the C file using tool and it seems to be very much easy to incorporate the generated file. Thanks again for the help. Still I will list out here both the methods.

I added a differential gain stage (basically the front two opamps of an instrumentation amplifier) and was using external 13-bit ADC.  There are much higher resolution ADC available that can eliminate the amplifiers.

The whole idea is to eliminate the tolerance of the current source from the math.  This is how they measure resistance on my multimeter.

If you use a different reference source for the ADC and the excitation, then you have to taken into account of  the temperature drift, long term stability etc between the two.

Hi Lee, Thanks for your suggestion. As I  am in development and still trying out different things. Your suggestions are really helping me greatly.

Regarding using external higher resolution ADC add up a great value in my BOM which would drive the circuit out of budget. I would really like to try out what you are saying. But I am not able to understand how did you connected PT100 to differential ADC. If you add resistor in series with it, resistor being pulled up, the other end of the PT100 needs to be ground. The non inverting input of the OpAmp will be PT100, what will be inverting input then.

Also if I just use the resistor in series, the current flowing through PT100 will depend upon Vcc (which might change after some years) and the value of resistor which would change with the aging. I think adding just a resistor in series is nothing other than simple CCS.

I am really waiting for your reply and would like to have the best possible solution.

Your suggestions are most welcome. Thank You. 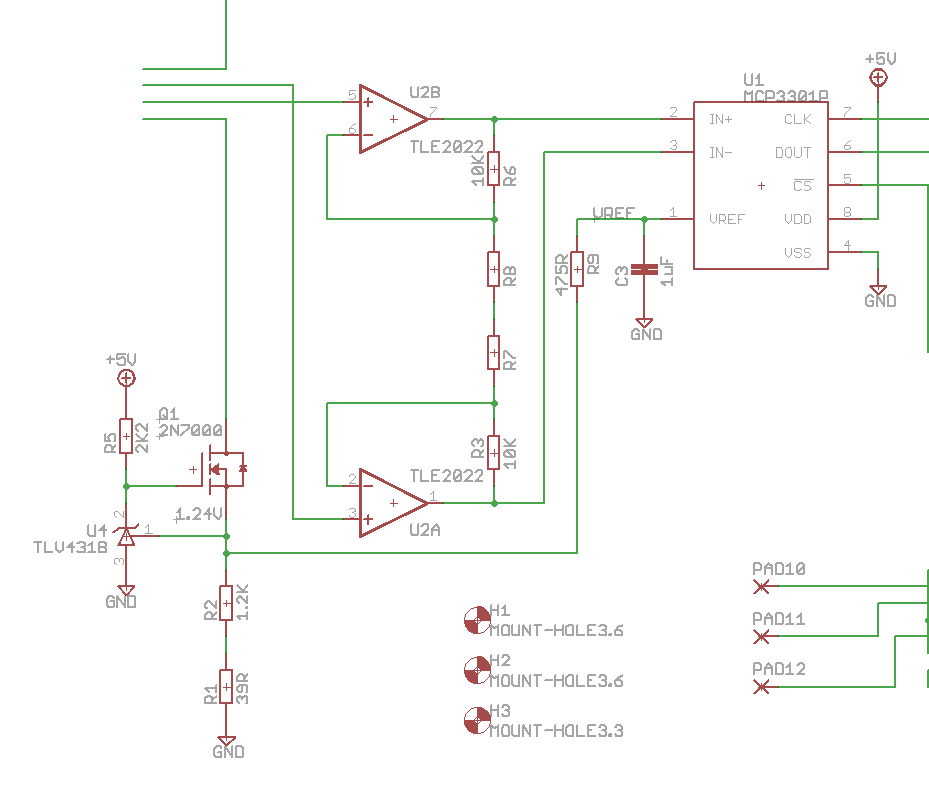 The reference voltage is taken from R1+R2 which is the feed back path of the constant current sink to U4.  The sensor is connected between power and the MOSFET.  The same amount of current would flow through the sensor as the reference resistor (the reference pin U4 takes about 0.15uA).

I did not use additional opamp in the feedback as they add DC offsets to the circuit.

Now the sensor is floating, so I'll need a differential input to connect the sensor in a 4-wire connection to combat the extra resistance on the long cabling to the sensor. 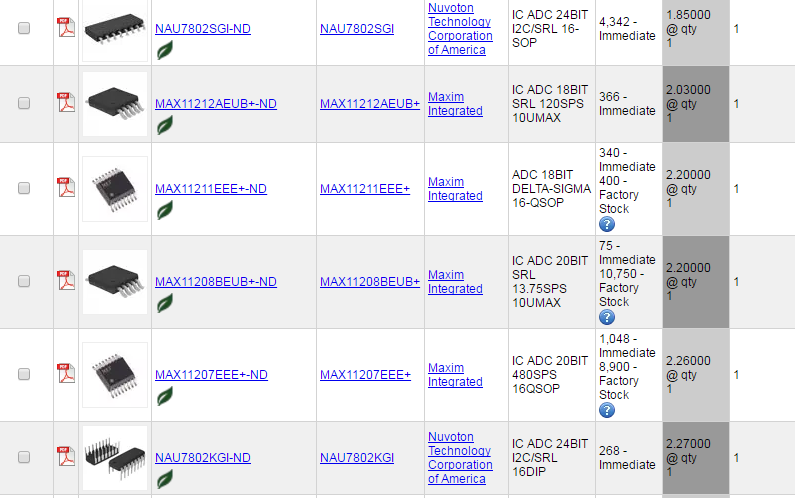 Are 24-bit ADC really that expensive that'll blow your budget when they are around what you would pay for your AVR.

>Also if I just use the resistor in series, the current flowing through PT100 will depend upon Vcc (which might change after some years) and the value of resistor which would change with the aging.

Hi Lee, Thank You very much for your constant inputs.

As from your provided schematic, It seems you are talking about four wire PT100. As I have already mentioned in my project description, this project is for a non profitable trust with very tight budget and so I am forced to use two wire configuration. Also the cable distance is not even more than 1 meter.

Also, Please consider following things I need to add further in the project.

This system's output is going to drive the other system which I will discuss in my next writeup here.

This circuit needs to have two temperature sensors, one pressure transmitter. This circuit is going to be kept in external condition, so I must use IP65 box. There are going to be four/five systems in total placed at different places which will be connected over RS485 and these devices will be acting as slaves on RS485 network. Now one master will be collecting data from all these slaves and will be sending data over ethernet to the other system which depends on this system for functioning. The system will be in outside field so I need to use Isolated RS485 IC, the box size is limited, I need to add ethernet, considering all these parameters does not allow me to add any extra ADC IC.

All other things like RS485 and ethernet are ready and the communication is established with other system, but now I just have to finish off this sensor interfacing only.

But I would really like to try out your suggested scheme may be for my next projects.

A 4-wire connection (i.e. 2 individual wires to each pin at the sensor) is still beneficial to the accuracy of measuring the *resistance* of the sensor. Your 1 meter of wire has resistance that can affect the reading - temperature drift etc.

I played around at some point using a PT100 sensor at one point.

I used a resistor in series with the sensor and used that as a reference for my ADC. The differential input of the ADC s connected across the sensor.  This way the reference constant current source tolerance doesn't affect the reading as it will affect both the ADC and the current the same way.

As for the correction, I used piece-wise linear interpolation computed from AN-709 "RTD Interfacing and Linearization Using an ADuC8xx MicroConverter" and the software provided to generate the data table.  You can input the error bound and the software will adjust the number of linear fits that satisfy the constraint.  A linear fit has much lower overheads than the straight math.

Their link is actually more organized than AD's.