Certain types of camera lenses (such as in the webcam used in this project) introduce distortion characteristics to the images such that objects along the optical axis of the lens occupy disproportionately large areas of the image. Objects near the periphery occupy a smaller area of the image. The following figure illustrates this effect: 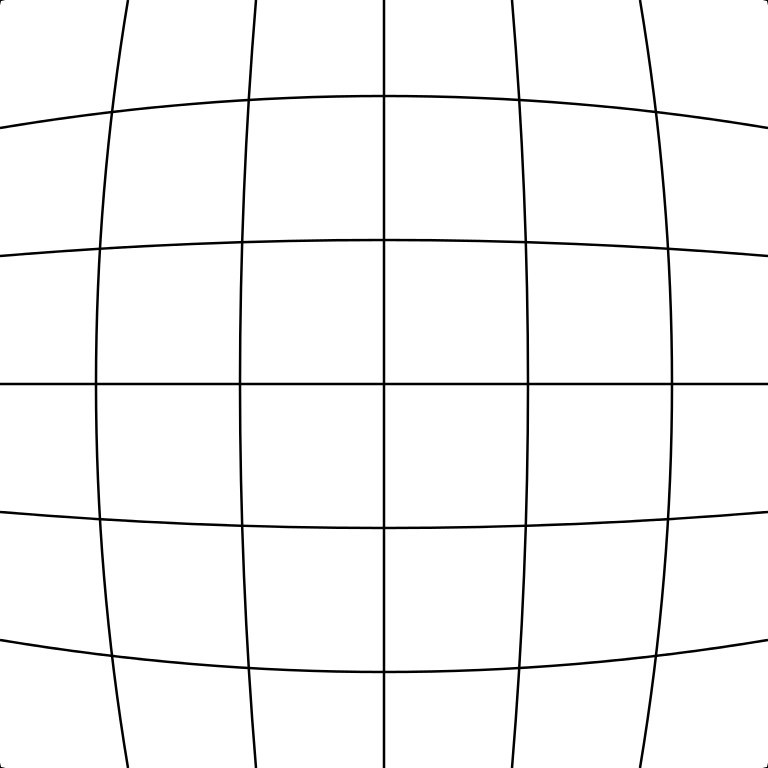 To correct for radial distortion the following formulas can be used:

Tangential distortion can be corrected via the formulas:

Hence we have five distortion parameters which in OpenCV are presented as one row matrix with five columns:

For the unit conversion OpenCV uses the following formula:

The parameters are f_x and f_y (camera focal lengths) and (c_x, c_y) which are the optical centers expressed in pixels coordinates. The matrix containing these four parameters is referred to as the camera matrix.

The camera matrix as well as the vector containing the distortion coefficients can be obtained by using OpenCVs camera calibration toolbox. OpenCV determines the constants in these two matrices by performing basic geometrical equations on several camera snapshots of calibration objects. For calibration I used snapshots of a black-white chessboard pattern with known dimensions taken with my webcam: 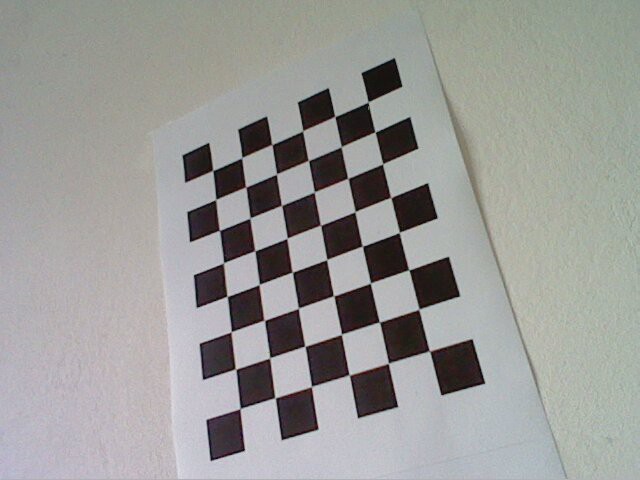 To obtain the camera matrix and the distortion coefficients I used the calibrate.py script which comes with OpenCV (see 'samples' folder). The script is basically a wrapper around OpenCVs camera calibration functionality and takes several snapshots from the calibration object as an input. After having run the script by issuing the following command in a shellthe calibration parameters for our camera, namely the root-mean-square error (RMS) of our parameter estimation, the camera matrix and the distortion coefficients can be obtained:

To unwarp an image and hence correct for lens distortions I made use of the recently acquired parameters and OpenCVs remap function as shown in the example code below:

Here, after generating an optimized camera matrix by passing the distortion coefficients d and the camera matrix k into OpenCV's getOptimalNewCameraMatrix method, I generate the look-up-tables (LUTs) mapx and mapy for remapping pixel values in the original camera image into an undistorted camera image using the initUndistortRectify method.

In order to unwarp the images obtained from the webcam, I have written a Python class, which performs the computations as described above (see Github repository). Same as in the class for controlling the servos, I use Python's multiprocessing library which provides an interface for forking the image unwarping object as a separate process on one of the Raspberry Pi 2's CPU cores.

Hey, I tried this out but was stonewalled by incompatibilities with opencv3! Dang. Looked useful.

Hello,
Thank you for posting this. I am very new to both python and raspberry Pis. I really like the clear explanations and you walking us through the process. I do have one question though, would it be possible to use your method to correct a video feed while it is being outputted through the HDMI interface?

Great bits of info here, thanks :)

And keep it up, liking the idea of your project alot!