After correction for lens distortions in the camera images, I apply a face detection algorithm on each camera image to obtain the apparent pixel position as well as the apparent pixel width and height of a face in front of the camera. For this purpose I make use of a set of haar-like features trained to match certain features of image recordings of frontal faces. I then use a classifier which tries to match the features contained in the haar feature database with the camera images in order to detect a face (see Viola-Jones object detection). It is notable, that although training a set of haar-filters of facial features is in principle possible (given a large enough database with images of faces), in the scope of this project I use a bank of pre-trained haar-like features that already comes with OpenCV.

Haar-like features can be defined as the difference of the sum of pixels of areas inside a rectangle, which can be at any position and scale within the original image. Hence, by trying to match each feature (at different scales) in the database with different positions in the original image the existence or absence of certain characteristics at the image position can be obtained. These characteristics can be for example edges or changes in textures. Hence, when applying a set of haar-like features pre-trained to match certain characteristics of facial features, the correlation by which a certain feature matches an image feature can tell something about the existence or non-existence of certain facial characteristics at a certain position. As an example, in the following figure a haar-like feature that looks similar to the bridge of the nose is applied onto a face (image taken from Wikipedia):

In order to detect a face using haar-like facial features one can use a cascade classifier. Explaining the inner workings of the cascade classifier used here is out of the scope of this project update. However, this video by Adam Harvey gives quite an intuitive impression of how it works:

Face detection using haar-like features using a cascade classifier can be implemented in OpenCV in the following way: 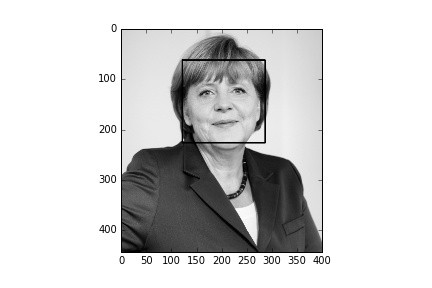 Here I first initialize a cascade classifier object with a pre-trained database of haar-like facial features (haarcascade_frontalface_alt2.xml) using OpenCVs CascadeClassifier class. The cascade classfier can then be used to detect facial features in an example image using its detectMultiscale method. The method takes the arguments scaleFactor, minNeighbours and minSize as an input.

The argument scaleFactor determines the factor by which the detection window of the classifier is scaled down per detection pass (see video above). A factor of 1.1 corresponds to an increase of 10%. Hence, increasing the scale factor increases performance, as the number of detection passes is reduced. However, as a consequence the reliability by which a face is detected is reduced.

The argument minNeighbor determines the minimum number of neighboring facial features that need to be present to indicate the detection of a face by the classifier. Decreasing the factor increases the amount of false positive detections. Increasing the factor might lead to missing faces in the image. The argument seems to have no influence on the performance of the algorithm.

The flag CV_HAAR_SCALE_IMAGE tells the classifier that haar-like features are applied on image data, which is what we are doing for detecting faces.

The flag CV_HAAR_DO_CANNY_PRUNING is useful when detecting faces in image data, as it tells the classifier to skip sharp edges. Hence, the reliabilty by which a face can be detected is increased. Depending on the backdrop, performance of the algorithm is increased when passing this flag.

When a face has been detected by the classifier it returns a list containing the lower left pixel position (x,y) and the width and height (w,h) of a bounding box surrounding the face. These parameters can then (hopefully!!) be used to determine the position of the face in the camera in order to control the servo motor angles.

In order to detect faces from the unwarped camera images i wrote a Python class which implements face detection using haar-like features as described above. The class is implemented as a Python multiprocessing task and takes the unwarped camera images as an input. As an output it returns the x,y coordinates and the size of the bounding box of the face. Unfortunately, the x,y coordinates obtained from OpenCV's cascade classifier jitter over time. This will result in jittery movements of the fan's lammelae when directly computing servo angles from the ccordinates of the face in the image. Hence, I implemented a temporal first-order lowpass filter which removes high frequency oscillations from the face coordinates over time. The following video shows a short test of the face detection module:

I trained my own haar cascade classifier, i want  show the inner working of classifier as you have shown  it in video done by Adam Harvey. Please help me out to check (visualize)  how it is  working on my image.If you have any commands or code or links to go through please share me. Thanks in advance.