After much delay, I have finally started real work on this project once again. Here's a list of project accomplishments for the week:

1. Purchased a new tablet to install in the dash; a Samsung Galaxy Tab S2.

2. Completed some experiments with the new tablet and determined that I can go back to my original plan of doing away with the stereo head-unit of the car.

3. Started work on the new dash panel that will house the tablet.

Here's a pic of the progress on the dash panel: 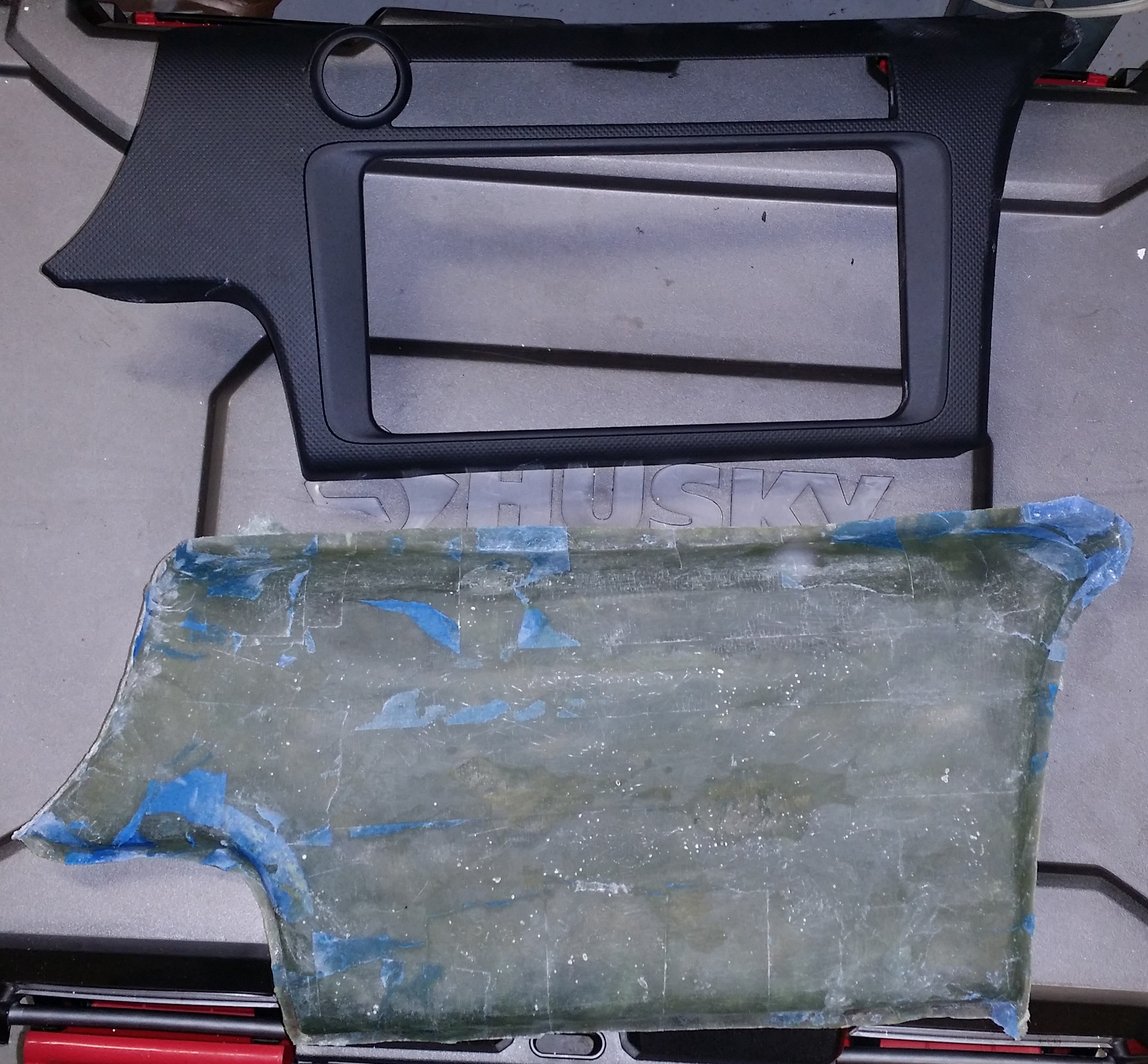 As you can see in the pic, I've done away with the opening for the stereo and the opening where the clock, passenger airbag indicator light, and hazard light switch used to be. The new piece still needs to be cleaned up and the edges trimmed down but it is a start.

As for the tablet and related experiments, I have solved the one big issue I had when I started this project: audio. I want to use the tablet as the audio source for music but retain the ability to connect my cell phone through Bluetooth for phone calls. Through several iterations of methods of connecting the tablet's audio and the BT call audio to the car, and many revisions of the overall vision of this project, I came to the conclusion that I couldn't have all the features I wanted. Enter the new tablet.

As it turns out, the Tab S2 has the ability to output audio through USB audio devices. It also supports USB hubs, cameras, keyboards (with media keys), and pretty much anything that you can find an app to use it with. It also does this nifty thing where when you turn on the WiFi Hotspot, it creates a proper IP routing table. This may not seem important on the surface, but it allows the tablet to communicate with the RasPi without interrupting its own ability to access the internet. It also has the obvious advantage that it gives the RasPi and internet connection.

Back to USB. Audio output will be handled by a USB DAC, probably a Schiit Audio Modi 2 Uber. Track controls will be implemented through a virtual keyboard through an Arduino Leonardo. The backup camera will be a Logitech HD Pro C270 (or C920, perhaps) webcam being displayed through an app called CameraFi. The last port on my USB hub will be connected to the stock USB plug in the dash.

There is still one issue with the tablet: charging. I don't want to have to bring the tablet inside every day to charge it but it won't charge will USB devices are attached. Hopefully I can hack a cable to get it to charge while the USB devices are connected, but if not, I'll have to use relays to simulate the disconnection of the USB stuff. That would mean setting up an auxiliary battery that is charged when the engine is running and charges the tablet when the engine is off. Perhaps those details will come in my next project log.

When it comes to audio, here's how I'm gonna set it up: tablet --USB-- > DAC --> line level preamp --> level control --> power amps. The DAC also has a S/PDIF input which will be the insertion point for the call audio from the BT module. It will be controlled directly by the RasPi which will receive an interrupt when a call arrives and display the call on the tablet screen. The RasPi will control the level of the signal going to the power amps through some means that I haven't fully worked out. I want to be able to do this so that a set volume can recalled whenever a telephone call comes in.

More work will done in the coming weeks and if I remember, I'll post more updates.