A project that I started in 2014, aimed to develop a low cost and modular refreshable Braille system

The goal of this project is to create an electronic Braille system that is affordable and can make this technology available to everyone. After initial evaluation, it was clear that thus the design of the individual character had to meet some minimum requirements:
• must use as many parts that are already commercially available
• should be made up with the lowest parts count possible
• custom parts must be easy to prototype, easy to scale up (injection molding)
• power must be not needed to keep the state of the pins
After working on several iterations, I have designed an electronic Braille character with a magnetic retaining system that has a really low parts count, is easy to reproduce or to scale up for production!
The project was self-funded, and I decided to not patent this system because I'd like to see as many people as possible benefit from it. The support of Italian association for people with impaired vision will be very important!

This image shows the development of the project, from the beginning to the current status of development.

The main idea behind the project is quite simple: For each pin, one coil can move move some very small magnets from one end of a cylindrical body; at each end, two small pieces of ferromagnetic material will hold the pin in position. With this design, power is not needed to keep the state of the pins.

I have successfully tested the pin mechanism, and built some character modules; of course the project is still work in progress and the final size and performances can be greatly optimized.

Now the development has been organized in phases.

With the current design, each "dot" on a character module is made up of 2 3D printed parts (Body and Magnet holder), 2 M2 nuts, 2 magnets, and 0.1mm enameled wire. A controlling PCB also hold the bodies. This design uses a really low parts count, and efforts have been put to use parts already available, such as the M2 steel nut; this design allows for a very low cost per character. 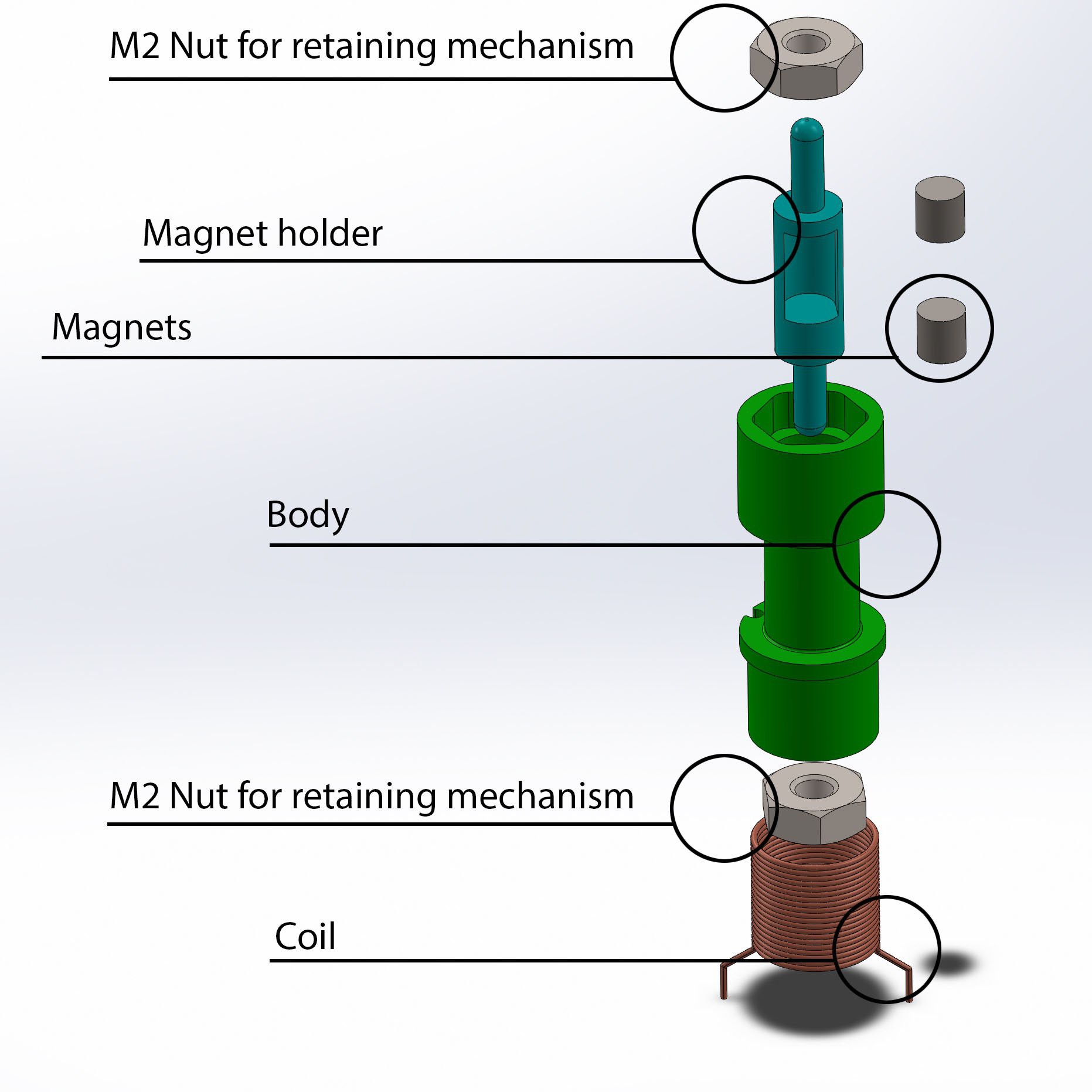 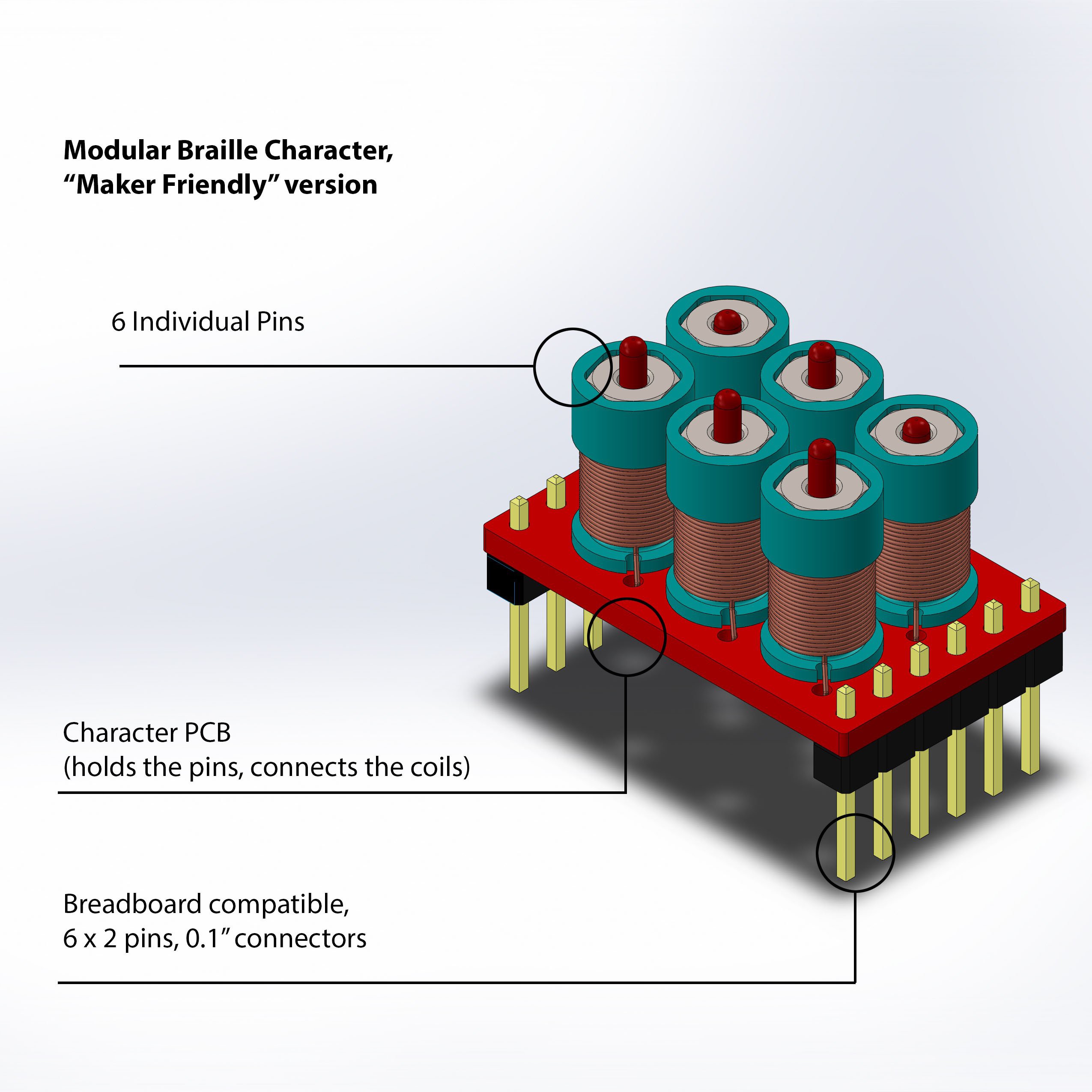 A (not definitive) cost analysis

The cost for a single pin , for a production in the order of hundreds, is estimated around or less then 0.85€. It includes nuts, 2 injection molded parts (magnet holder and body), magnets, and coil.

The cost for a single character is thus in the order of 5/6€ per character, with a small/medium sized production.

The cost for an entire line of 10 characters is around 120€, including 60€ of characters and 60€ of pcb, most of it due to the TB6612 currently used which are quite expensive.

An hypothetical device with 8 lines, a controlling board, sensors, battery and enclosure should have a total cost of less than 1000€ for a medium/small production, allowing a final retail price of probably 2000€... which is quite not bad compared to the commercial products available today!

Do you produce this devices in commercial scale?

I know this case. People needs are big... And how we could answer?... We should looking for as cheap/simple method as possible...

I did very similar experiments. Problem is that it does not create enough effect. Even if we take powerful rare Earth magnets.

In Braille system dots are small and spaces between them are small too... So flat/pancake solenoid is not good for this. When you add more turns you will get smaller conducters - so smaller amperage possibilities...

Much better characteristic has vertical/barrel version for this goal... But we can't print this...😒 Only way is to use multilayers pcb technology or make something much different...😸 I chose that path. It is possible to create free structures - regardless of their topology and materials used. I do not think about 3d printing beacuse it does not give us freedom of creativity. I will show my proposition soon...

My name is Hiba Yahya and I’m a high school student.

I’m really interested in your project and wondering if you are ready to sell it.

The reason why I want to buy it is because I have a school project that I have to do with my group to help the blind people. And we don’t really know much about electronics so we can not make this peice ourselves.

You could save half bridges in the driver, if you do some mulitplexing. Like connect all "A" ends of the coils of one character to one half bridge and the "B" ends to individual half bridges. 7 half bridges per character (6 pins) instead of 12.

Full multiplexing is difficult as you can not use decoupling diodes because you have to drive the coils in both polarities.

Fantastic progress! I think you may have the simplest version I have ever seen. Also great idea on the machine nut retaining mechanism to avoid the "Clicky Pen Patent". I await a demo video of a completed digit.

Thanks! By the way, the demo of the complete character is available as a video!

A 3D printable bracket to both support and hold a shelf in place.
Project Owner Contributor

Hold your broken Hololens headband together if you were unfortunate enough to break it.
Project Owner Contributor

The 2017 Hackaday Prize
An improved version of the 2016 project, aimed to develop a low cost and modular refreshable Braille system
Project Owner Contributor