A quest for the most versatile small BBQ smoker combo

I like to grill and barbercue a lot. For me there is only 1 condition in which it is impractical to BBQ and that is harsh wind. Otherwise, come rain or snow, there always is an oppertunity to grill, smoke or barbecue something. For years I have been perfecting my methods and gear to achieve reproducibility, efficiency and ease of use. My lastest BBQ hack seems like a nobrainer, but that is only in retrospect.

For years now I had Barbecook shaft and bowl BBQ, which I bought from a thrift store for a steal years ago and despite the abuse and 24/7 exposure to the elements, it had lasted quite well with some minor repairs here and there. My previous units were cheap basic BBQ's that helped me learn the basics, but with this bad boy I could finally start doing some fancy gourmet shit!

One of my favorite methods is indirect heating while lightly smoking fish and burgers. This is your basic indirect setup with the coals at the back of the bowl and the protein situated on the grill on the other side. When the coals are burning nicely, damp wood chips are introduced and the bowl is covered with a lid to temper the fire. Typically the protein cooks and smokes for about 15 minutes and then it is ready. It is sort of a crossover between slow-cooking, smoking and barbecuing. 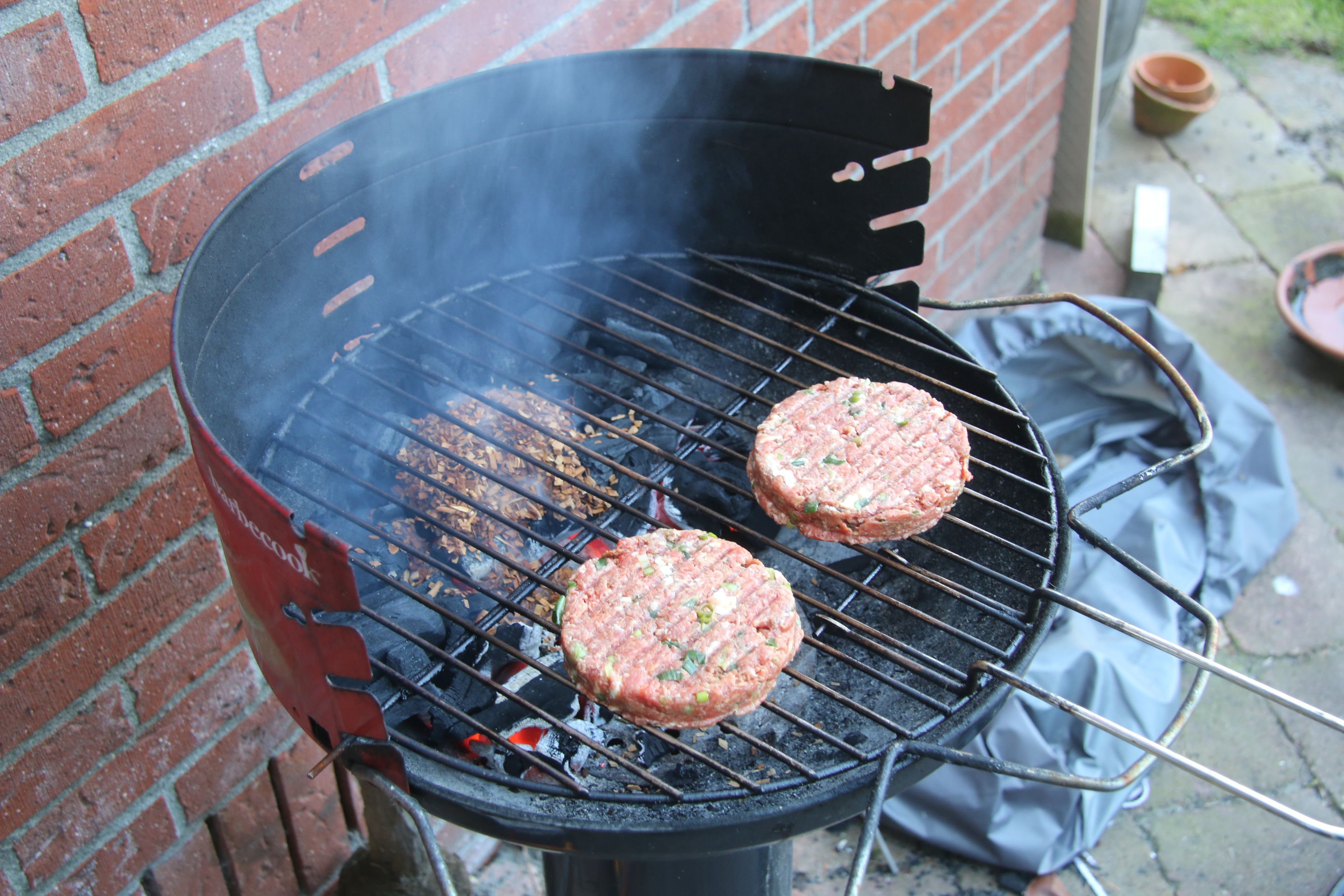 Anyway, these juicy, smokey burgers have been quite the hit with family and friends, but the problem is that I can, at best, manage 4 portions at a time, that is what half the surface gives me. Anymore and part of the protein will burn or drip on the fire, which is precisely what you don't want. Wood smoke == jummy, Charred meat flavor with extra polycyclic aromatic hydrocarbons != jummy.

Because of the excellent build quality of my BBQ (I am not sponsored or employed by Barbecook in any way), when I saw a smoker unit by the same brand on discount I hasitated not and brought it home. A fairly simple unit with a modular design of three parts 2 grills and 2 bowls, it could do a variety of smoking, including hour long low temperature smoking for nice treats like smoked fowl, fish or jerky. This all worked fine, but then there were the problems with the unit. 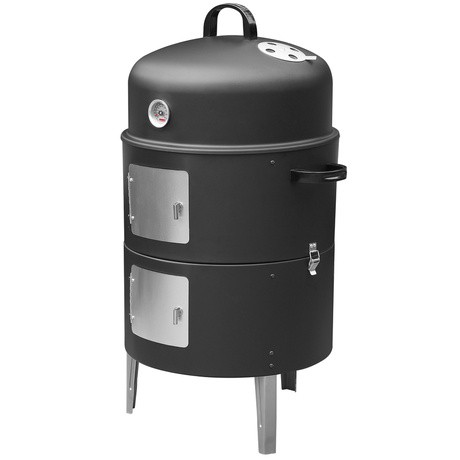 The smoker unit had no fire control what so ever. You can't cut off air from the bottom and the bowl is just that, a bowl! That means that at one point the ashes (as is a incredible insulator), will start to affect the fire. The next issue is that the unit is low to the ground making operating the lower compartments a pain in the back, literally. Having to get down on all fours isn't ideal when operating a thing that is a couple of hundreds degrees c. Also as an archaeologist, I have far superior methods to ruin my back. And finally, to my shock, the build quality was nothing like the similarly branded grill unit. Under the same conditions, the smoker started to rust after 2 years and all the exposed bare metal parts were completely shot. It was time for a proper reconditioning of the smoker and as with any restoration, why not throw in a bit of improvement! Let's hack the smoker!

I have used the lid of the smoker on the grill unit ever since I got it. The lid is higher than the one I used previously and it has a temperature gauge build it so I can carefully keep the unit around the temperature the protein requires. 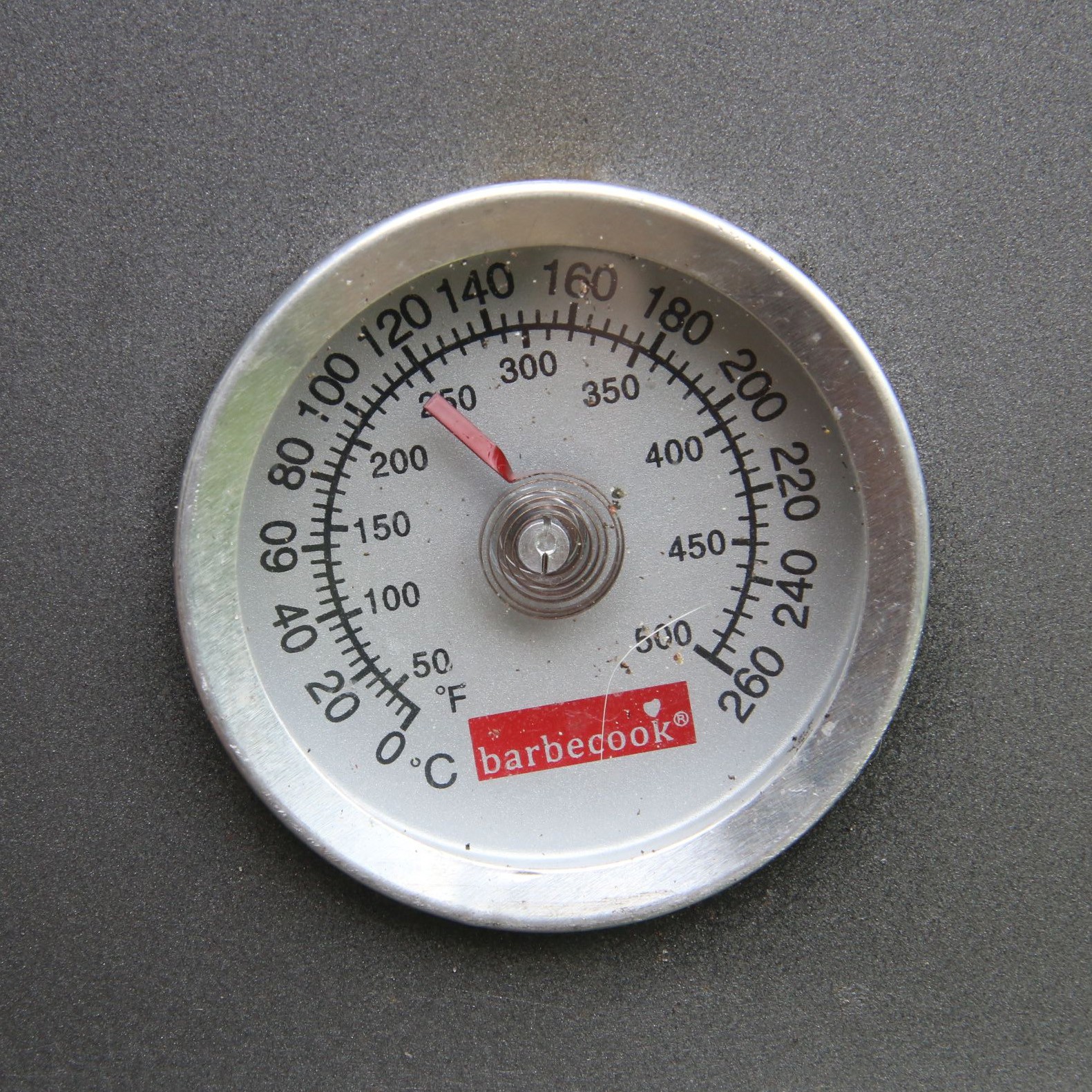 So the lid of the smoker fits the grill unit. What If i could use other parts of the smoker on the grill or truly combine the two. The grill is excellent in controlling temperature and the smokers modularity gives it a wide range of options.

The modifications had to be non-destructive because I like to have the option to use the smoker and the grill at the same time if needs be. The goal was to maximize potential output of the unit so that I could perhaps double the amount of portions per session, but first the unit had to be restored.

Restoring was easy. Sanding the rusting parts down and coating them with a generous amount of high temperature (800 degree should be enough!) spray paint did the trick. Rusted nuts and bolts had to be replaced and that was about it really.

Now it was time to figure out how to combine the two units. Seeing as the circumference for both units were the same, this should not be a problem. The best fit between the grill unit and the smoker was the top barrel unit because it has a flange which sits nicely in the bowl. Normally this part sits on the bottom unit of the smoker and it houses the...