Last year I got a hexapod robot, and played around with it a bit, but I wanted to do some of the processing on my own without a tether to my computer. I read around a little bit, and it looks like this magic thing called inverse kinematics is required to develop gaits (how a robot or person walks). More on that later. I wrote some code, cursed Windows 10 (it froze a couple times while Arduino gave me an error :( oh well), and eventually, produced some drawings that appear less coherent than those a one-year-old might draw.

What are Inverse Kinematics?

Forward kinematics are used to determine the position of the end effector of a segmented armature or leg (or anything else with joints) with known values for the angles of each joint. This can sometimes be useful, but rarely do we want to know where the end of our robot arm or hexapod leg is going to end up if given some specific angles. Inverse kinematics are the opposite of forward kinematics, in that the position of the end effector is known, and the values of the angles are unknown. This is very useful if we want to move to a particular position, the problem is that the calculations required to determine the angles are significantly more complex than those of forward kinematics. I found two websites that were of some use to me: https://oscarliang.com/inverse-kinematics-and-trigonometry-basics/ and http://www.societyofrobots.com/robot_arm_tutorial.shtml.

Alright, Let's do Some Math!

I found it very useful to do some drawing in a notebook, because I can add and solve for angles more easily if they are right in front of me. 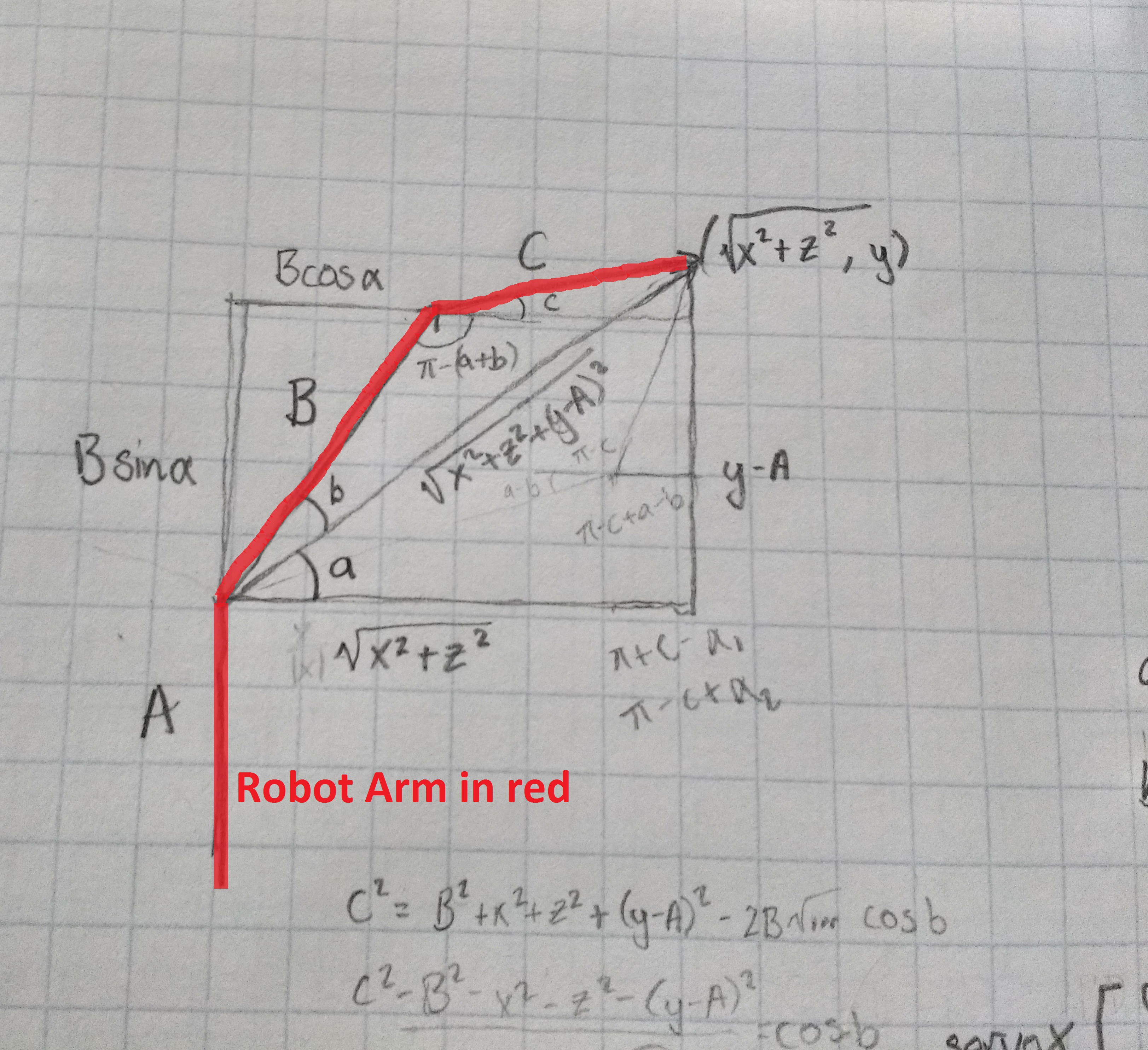 Originally, I tried to do too many things at once and attempt to accommodate for lots of positions, but as the code I created for that failed over and over, I decided to follow a more naïve approach and force the arm to take only one of the (sometimes two) possible paths to the point (x, y, z). Once that worked, I reintroduced the second route as an option, but favored the first route (meaning it only took the second route if the first failed).

Hi, it's great to see people working on this! I struggled with it myself for #Tote, but after a lot of tries finally succeeded in something workable. I tried to explain it in the documentation at http://tote.readthedocs.io/en/latest/ik.html -- there is also the code for it, both in Arduino and in Python. I hope that helps!

Thanks, I'll be sure to check it out!

Official Hackaday Prize Entry
For years i wanted to make a humanoid robot. I am presenting my first milestone here - robot can walk in straight line.
Project Owner Contributor

A family of tiny robots, each with their own way of life.
Project Owner Contributor

A large hexapod using a frame from ebay, HXT12K servos from HobbyKing and a Parallax Propeller as the controller.
Project Owner Contributor