HydroBot is a modular control system for automating hydroponic gardens.

HydroBot is a modular control system for automating hydroponic gardens. This system is designed with three objectives in mind. First, it will facilitate optimal growing techniques by using scheduling and feedback control loops to maintain state and adapt to changing conditions. Second, it will simplify controls interfaces, making setup and use easier for less tech-savvy gardeners. Finally, the components will be designed in a modular way to increase flexibility and support every imaginable garden configuration. HydroBot aims to bring sensors and actuators together through automation, which will allow hobby growers to focus on growing and not on constantly monitoring and adjusting the environment to keep their garden stable. 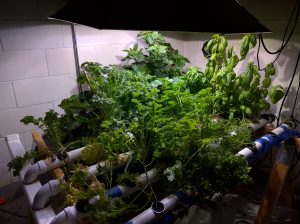 As the world population continues to grow and become increasingly connected, more attention is being focused on the disparity in living conditions across the globe. The further technology advances, the harder it is to believe that people in many parts of the world still struggle with attaining basic human necessities such as access to clean water and sustainable nutrition, and yet these issues remain unresolved. Addressing these problems will require collaboration from the global community, and I believe that hydroponics has the potential to be at least one part of the solution. Let’s look at the reasons why hydroponic gardening is superior to traditional agricultural methods.

The biggest downside to hydroponic gardening is the cost and complexity of the system required to support it – and that’s where HydroBot comes in.

HydroBot looks to solve the problem of controlling a complex hydroponic system through automation, simple interfaces, and flexible design. Automation will be accomplished through the use of an embedded computer that will handle all the feedback control loops and scheduled tasks. The embedded computer will communicate with a server to provide data logging and an easily accessible remote interface. The server will also host a webpage with data graphs and user controls, and have to ability to send out critical system alerts. To make the system flexible, a modular architecture will be used for all functions that interact with the physical world, such as sensors and actuators. Each function will have a corresponding module to carry out that specific task and report back to the embedded computer, which will act as a central hub for these modules. A multi-drop communication network will be used to connect the modules to each other and to the central hub. A block diagram of this system architecture can be found below. 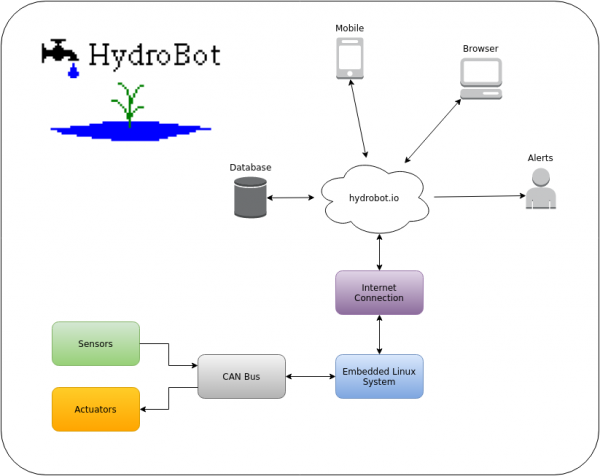 Although each module will be developed separately as the need arises, there are some high level system design decisions that will dictate the requirements for the modules. CAN has been chosen as the primary communication network for HydroBot, because it meets the multi-drop requirement, works well over relatively long distances, is very robust to environmental noise, handles errors gracefully, and has built-in arbitration and message priority. Support for additional communication protocols may be added in the future as needed – for instance, if an application requires wireless communication. To make the system as flexible as possible in a variety of applications, both 12V and 24V power will be supported. Modules will also be daisy-chain-able and allow up to 1A of pass-through current. To keep connectors consistent, JST ZH series has been chosen for module connections when possible. To keep a consistent code base and shared libraries across modules, STM32 microcontrollers will be used as the standard for module processing.

Several key modules have been identified to fulfill the basic functions required in most hydroponic systems: