Build your own laser Lumia light show for about $20.

Recently, I found an article on a group that resurrected their past as laser light show operators, building a portable laser light show for audiences.
“Lunch Box Laser Show” http://makezine.com/projects/make-20/lunchbox-laser-shows/

I too, had built and operated laser shows as a planetarium technician back in the 1970’s. With today’s low cost laser diodes, you can build laser projectors for a tiny fraction of the cost back then. Here is my take on a “Laser Lumia” projector, suitable for home use or small (dark) auditorium for less than $30. If you have a ceiling, wall or screen that is light colored, in a darkened room, then you are all set.

Using one or more various color laser diodes, a motor and a plastic wheel with glue spread on it, you can build a laser lumia light show. 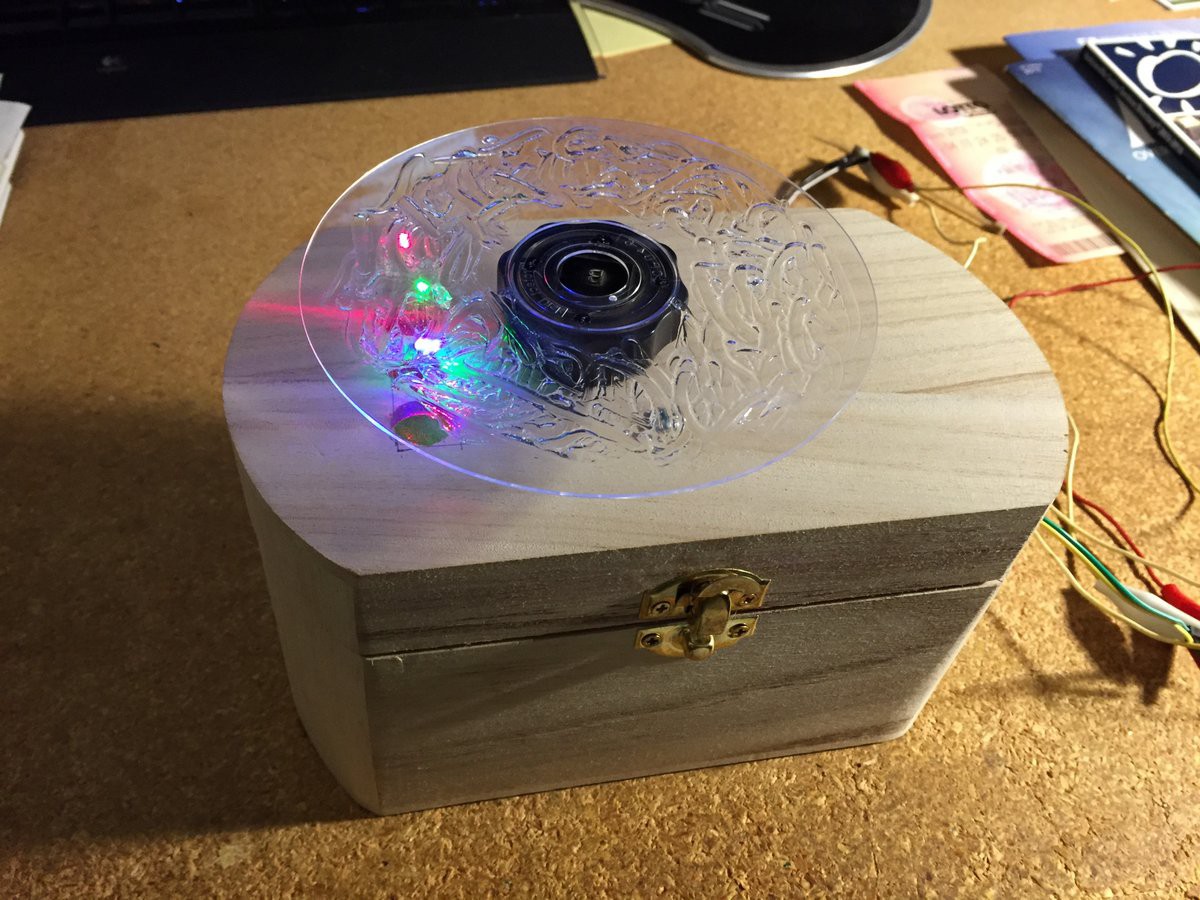 The Lumia Wheel is constructed from a plastic CD/DVD “spacer” disk. If you have a stack of DVD RWs or CD RWs, they probably include a clear spacer on the top and/or bottom of the stack as shown in the photo. 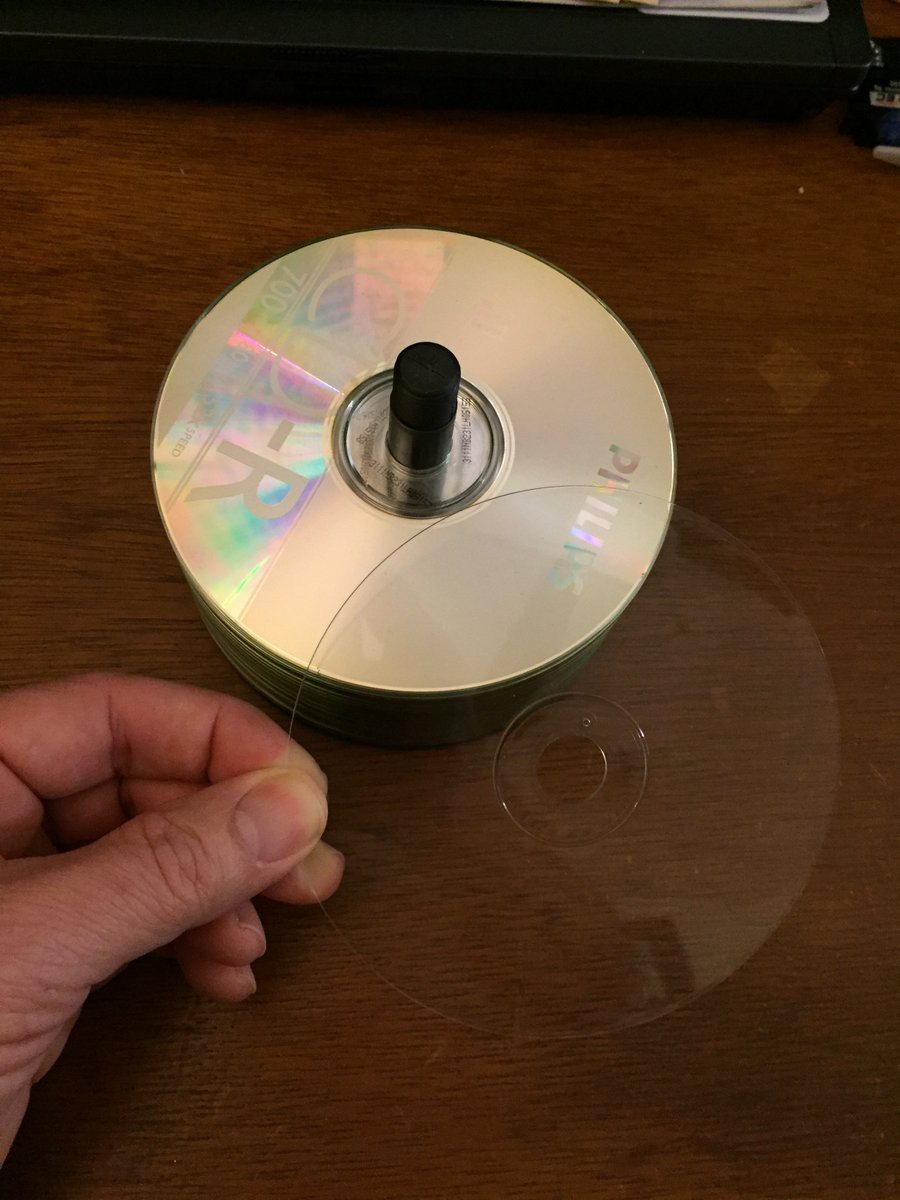 If you don’t have this, you can use 1/16” clear acrylic or similar (easiest to cut) and cut a 4 ½” square. Lay an old CD or DVD on top and use a magic marker to outline it, including the center hole. Use a scratching compass or tool to etch the circle and snap off the 4 corners.

For the “Lumia” part, you will spread the glue over one surface.

I used the Loctite Go2Gel glue as it is thick, doesn’t run or change color. You want to be sure it dries clear, not cloudy. You can test on a scrap plastic first. NOTE that some glues dry clear, but then turn cloudy after a few days. Testor’s airplane glue did this to my first disk. L

Best is NOT USE YOUR FINGER OR TOUCH THE GLUE TO ANYTHING. I suggest trying it on a scrap piece of plastic first. You want it rough, not smoothed out. Be sure to cover the disk where the lasers will be shining. If you leave gaps, the beams will go straight thru as a dot, kinda ruining the effect. You can test a piece by just shining a laser pointer thru the glue covered plastic towards a darkened room wall or ceiling. You should see a pattern similar to the intro photo. 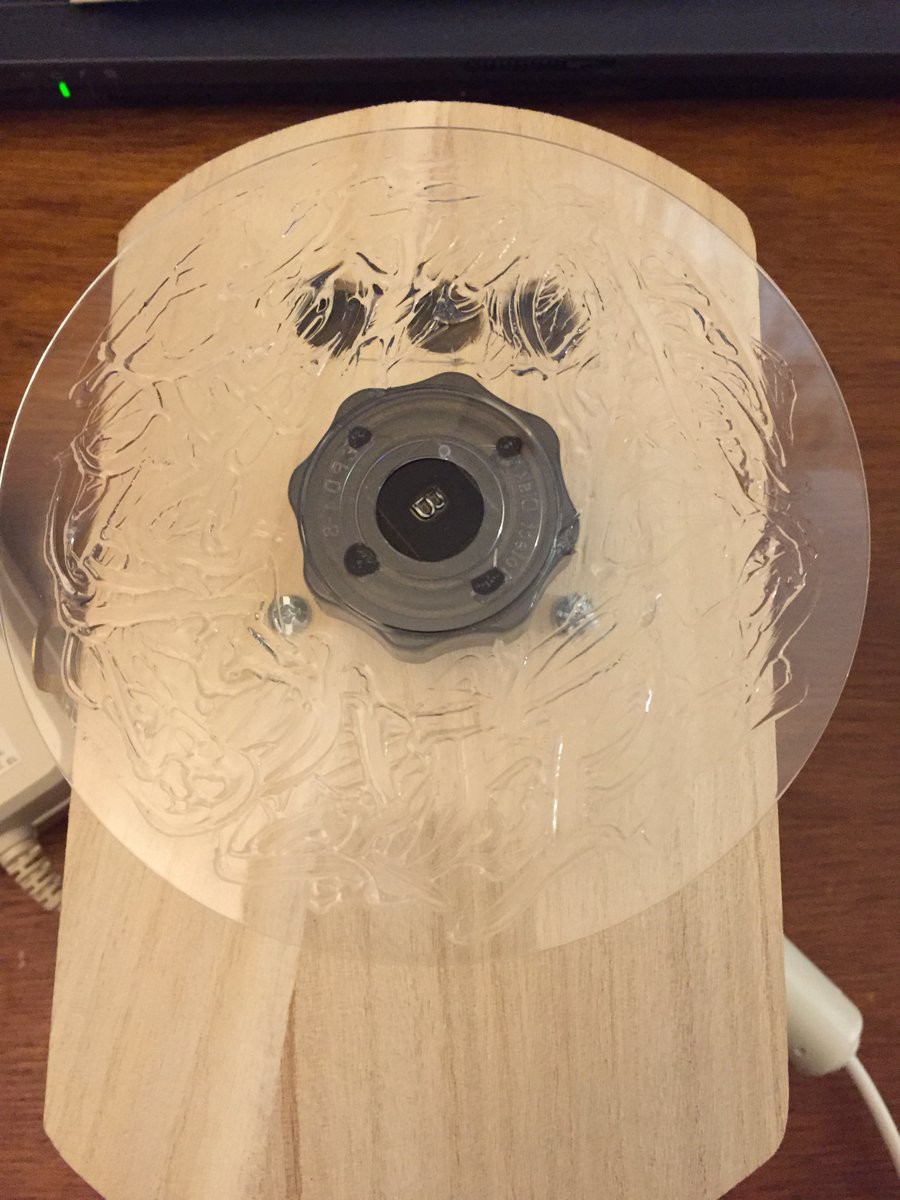 Set aside the disk for 24 hrs to completely dry.

The motor should be 1 RPM or less. But, I found that the 12v 3rpm motor listed worked perfectly at 3V running at an even slower speed. Nice and quiet, too. Since the wheel is very light, a lightweight geared motor should be fine. But speed of 1 RPM or slower is important, unless you want a wild trance dance music version!

To mount the wheel to the motor, I found an old radio knob with set screw that I glued the plastic wheel to. It doesn’t have to be exactly centered at all. A little wobble won’t hurt anything.

I found a small craft box with hinges and latch at a craft store for $5. The basswood is great for such a simple project. It just needs to be big enough to install the lasers, motor, and optionally, D batteries.

I drilled 3 holes for the laser beams and another for the motor. Exact measurements are not needed, as long as the lasers are not obstructed and stay shining thru the wheel all the time. 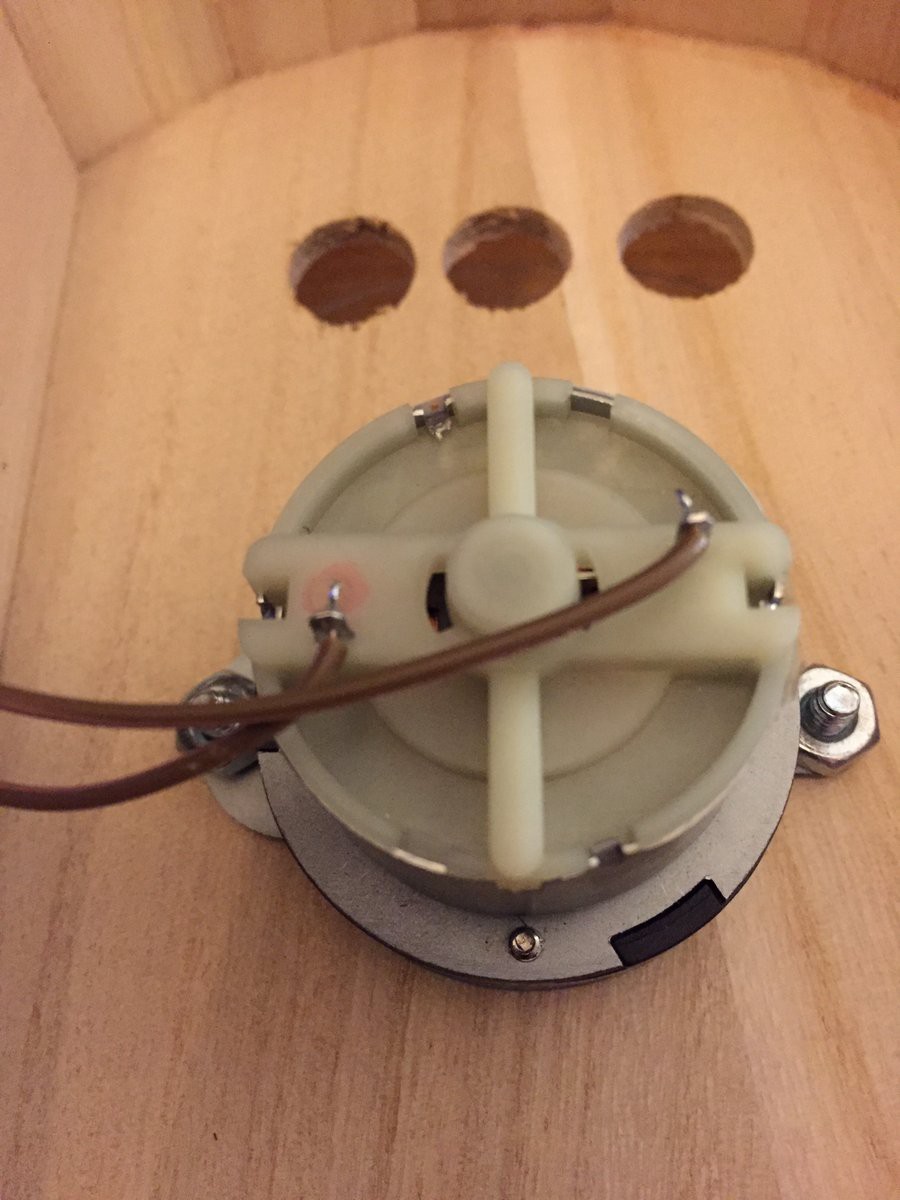 Heed the warning not to shine the lasers directly into your eye or anyone else’s!

I mounted the three lasers in a row on a piece of wood with nothing more than a wire tie. But you can hot glue as well. 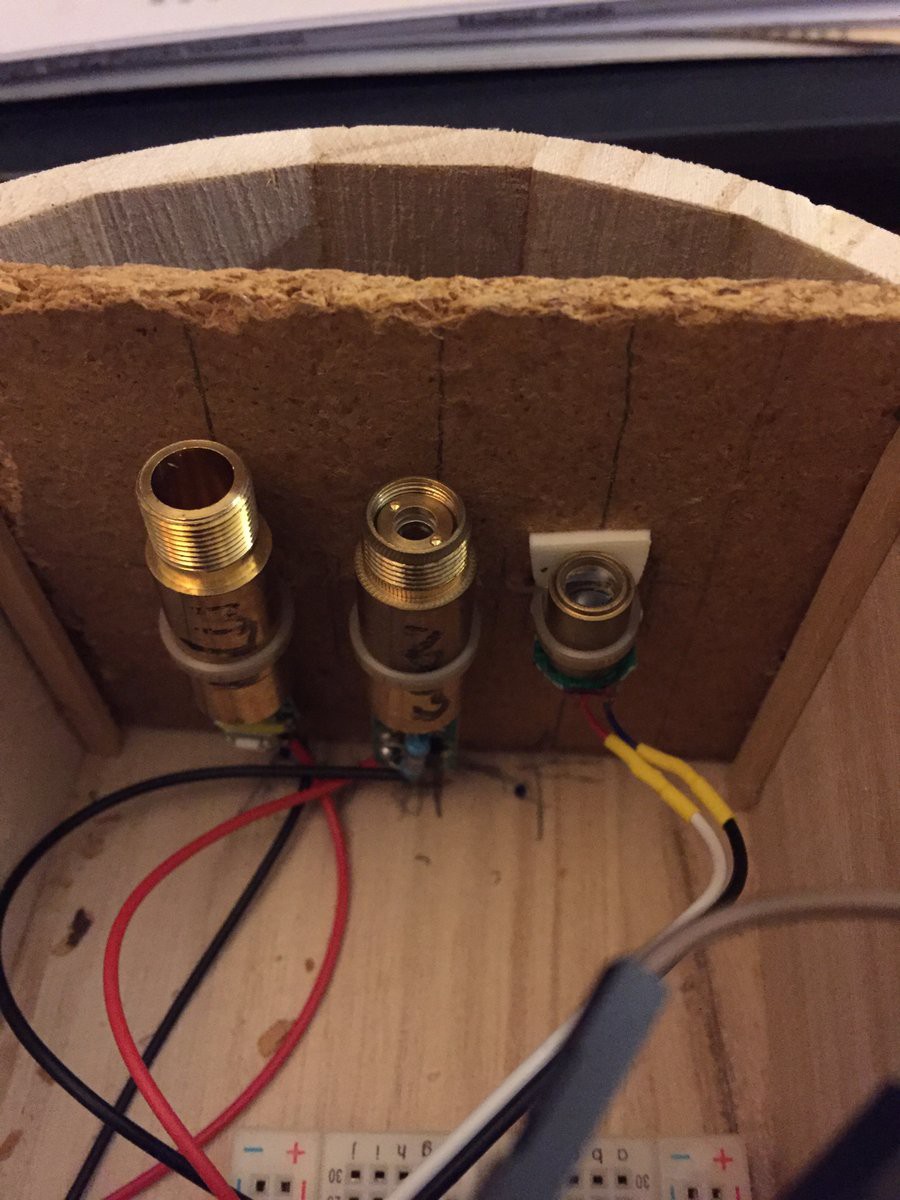 NOTE: these lasers do get warm. I only run the unit for 15-20 minutes at a time. But if you want longer, you might substitute a piece of brass or other metal to mount them on. This would help as a heat sink.

Wiring is simple. Just connect all the negatives together and all the positives together, including the motor (No polarity worries with the motor. It can run either direction). Connect each bundle to the negative and positive of the 3V power supply. NOTE: you must use no more than 3.0-4.0v DC with the lasers or they will burn out or flicker! The motor should run fine at 3v.

You can use two D cell batteries instead of 3V 1A AC wall wart. D batteries are needed because of the amount of current that three lasers plus motor require. Geez, we needed several thousand watts to run our lasers back in the good ole days!

You will probably need to solder leads together, as some of the laser modules have very short or thin wires. Fragile! 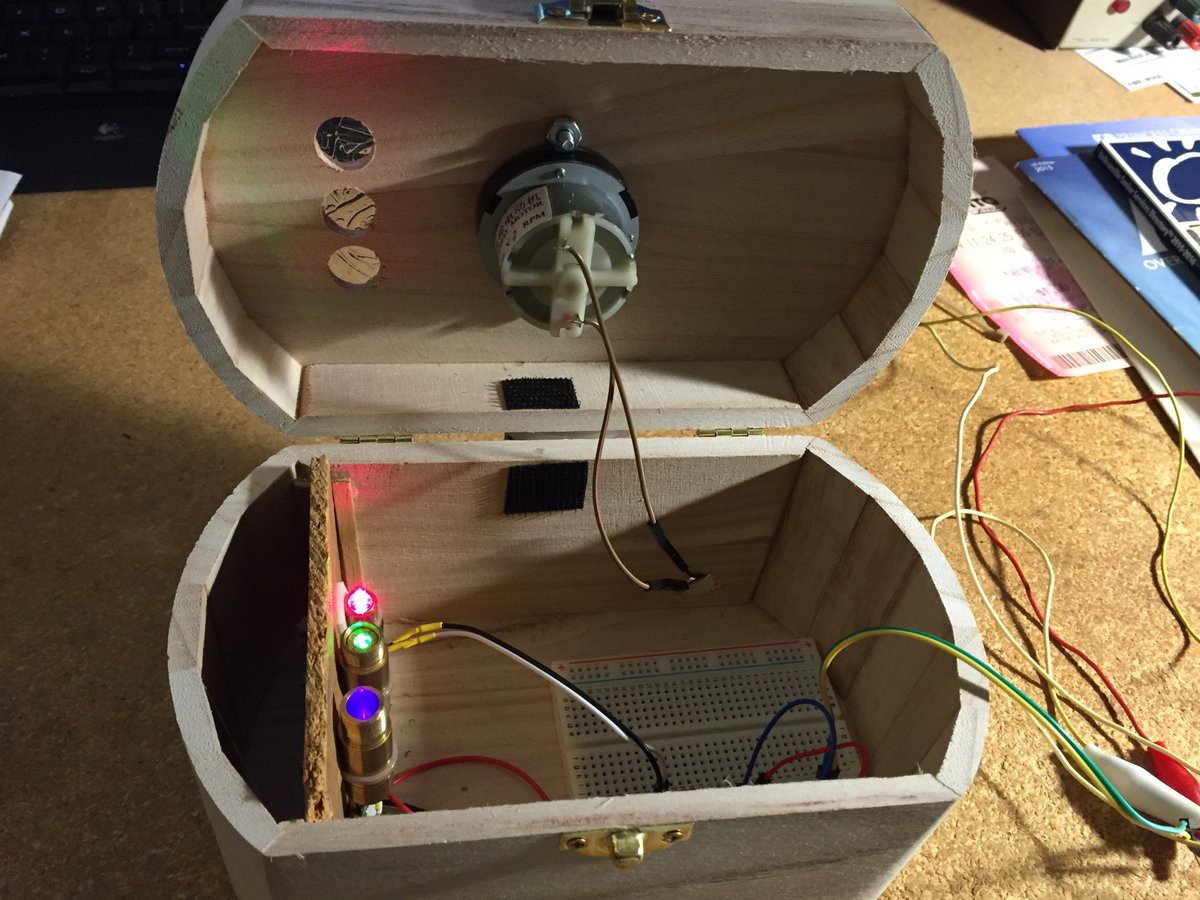 Close the lid and turn on the power. Verify that the beams shine thru the three holes. Adjust the holes or the lasers as needed.

WATCH OUT! Don’t look down onto the lasers! Instead,...

Helmet with rotating laser, indicating how much distance people should keep from me
Project Owner Contributor

A lasersculpture which uses a certain mathematic geometry so that the light appears bent in the middle of the room.
Project Owner Contributor