Zizzy is a personal robot prototype for people with limited mobility. It is designed to move freely on a smooth desktop or table. It can talk, show emotions, and manipulate food, water and communication devices. It can also do pill sorting and provide medication. It can move autonomously in pre-programmed sequences or be remote controlled by the user. At 12.5 inches high, it does not take up much space.

The head, body, arms, mounting brackets, air control valves, and the artificial muscles that actuate the two arms and grippers, are all 3D printed.

This robot is all open source hardware and open source software. Anyone can take what I have done and use it freely, and hopefully, improve on it.

While quite functional, this is just the start of the most advanced robot I have so far built . It is not yet the finished and ultimately useful robot it can be. 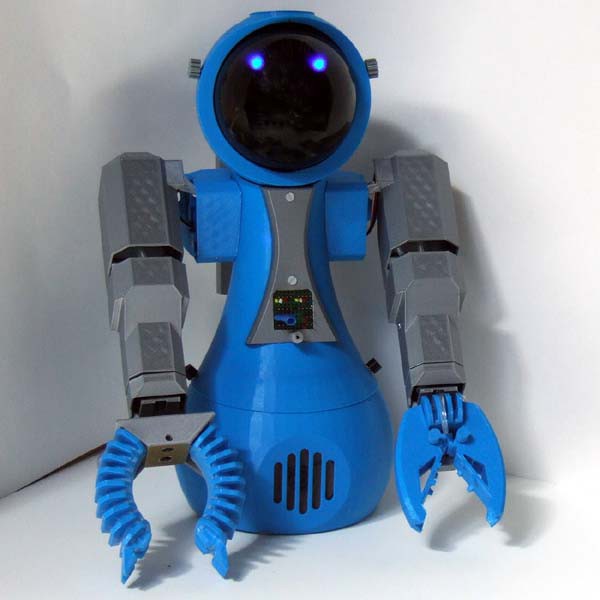 The two arms can be used to pick up objects and move them to the person controlling it. It can be used to provide medicine, food and water or manipulate a phone, tablet, or other device. The voice circuit can be used to facilitate communication for those with limited or no speech. The face is basically an emoticon that can be used to display emotions.

Zizzy the robot, can be remote controlled using infrared signals from a standard universal remote control. An infrared remote control could easily be modified to interface with a wheel chair, puff and blow, or other type of controller. This would allow the operator to remote control all motions or to activate pre-programmed sequences.

The Future Of Robotics

While much is made about the purely soft robots that have little or no bone structure, my previous soft robot experiments have shown that a fairly stiff skeleton with hinge joints is neccessary with soft robot artificial muscles to get precise movements that are easily repeatable.

I believe the air pump you need is a vane pump style. I was going to whip one up and test it out, but then found that they exist...

I may make one anyway because I need a small air ram for one part of my project. If there is any interest, let me know, i`ll document it. I am basing my knowledge on the internals of a vacuum pump and a diesel injection pump.

Hydro Dog is a full-size robotic quadruped powered by fluidic muscles built as my senior project. It can jump and bound under its own power.
Project Owner Contributor