As a second iteration of the design, I built a prototype of an automated measurement system. The design may not be optimal, mainly because I just used parts I happened to have around. On the other hand, I've been quite pleased with the performance and ease-of-use so far. I assembled the prototype ugly-style on a piece of copper clad: 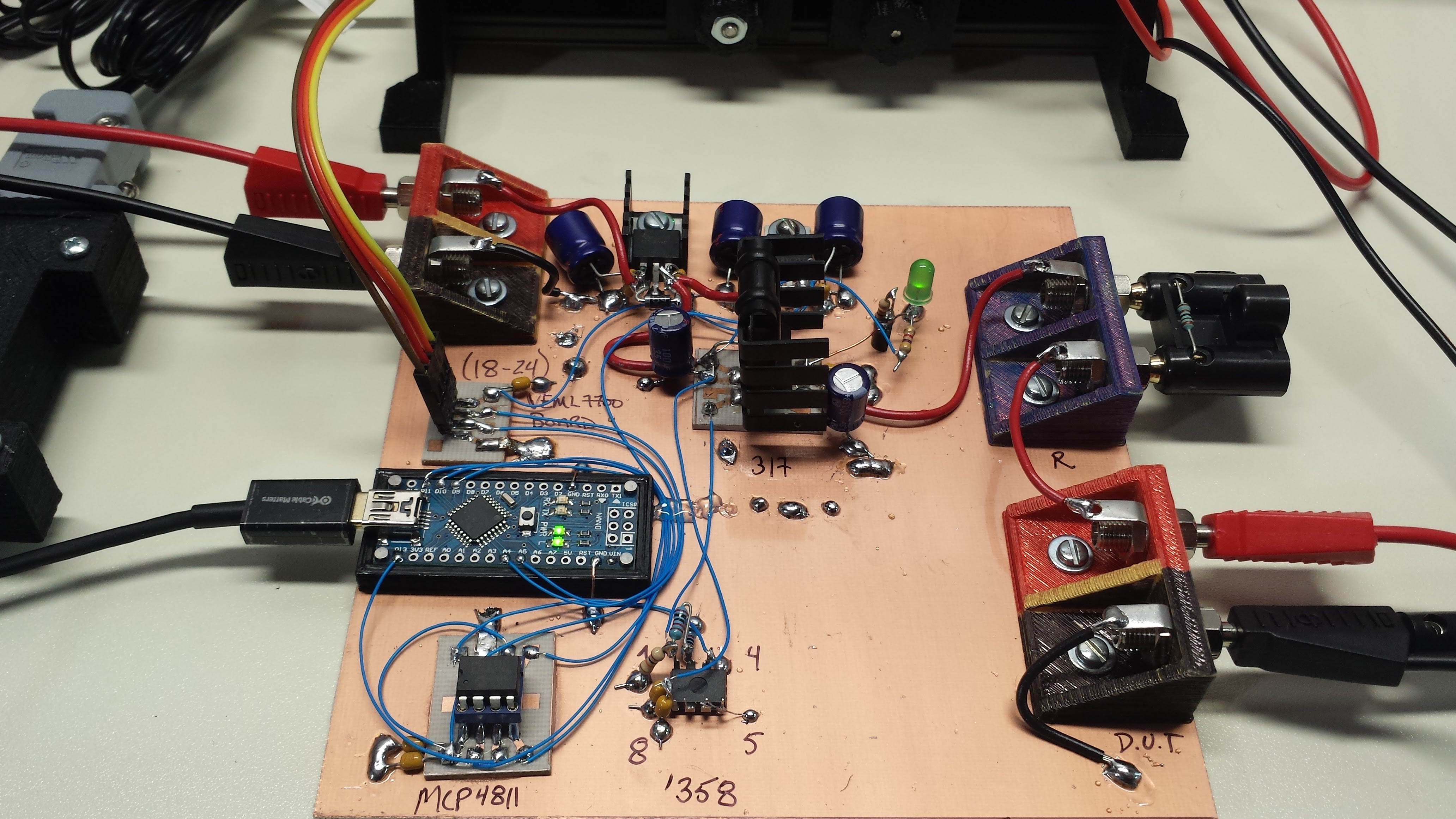 The basic circuit is the same as the manual design, except a 10-bit DAC drives the reference voltage for the LM317 regulator: 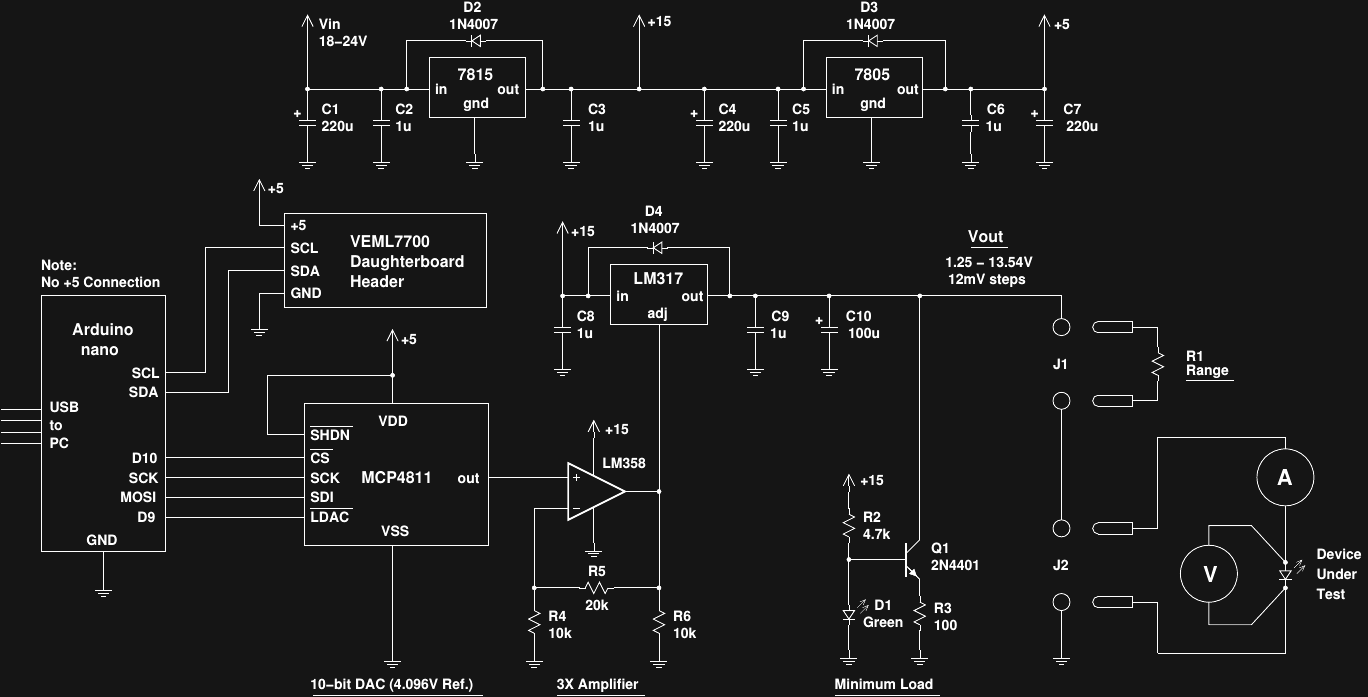 The 3X amplification is provided by a jellybean LM358, because I have (100 - epsilon) of them. The '358 has an input range that extends to ground, but the output has difficulty sinking current at low voltages, so I added the odd-looking R6 as a pulldown.

The LM317 requires a minimum current of around 10mA to maintain regulation, so D1 and Q1 are used as a current sink across the output. Depending on the exact green LED used at D1, you may need to vary R3 a little to get around 10mA into the sink. 15mA might be a good target to shoot for, but I wouldn't go higher than 20, because the maximum dissipation on Q1 would then be (0.02 * 13.54) = 270mW, which is about all I'm comfortable running a plastic-cased transistor at (I usually divide the datasheet maximum dissipation by 2, in this case 625/2 = 312 mW would be a conservative max). D1 also serves as a power-on indicator.

The circuit is controlled by an arduino nano clone: the MCP4811 is controlled over SPI, while the VEML7700 light sensor board is connected via I2C. A simple program on the nano responds to two commands:

The range-setting resistor, R1, is mounted in a dual-banana plug for quick range changes.


I left room on the copper clad for ADCs to do the measurement, but for now the DMMs work OK. Here's the system in operation (with the light-shielding cardboard box removed): 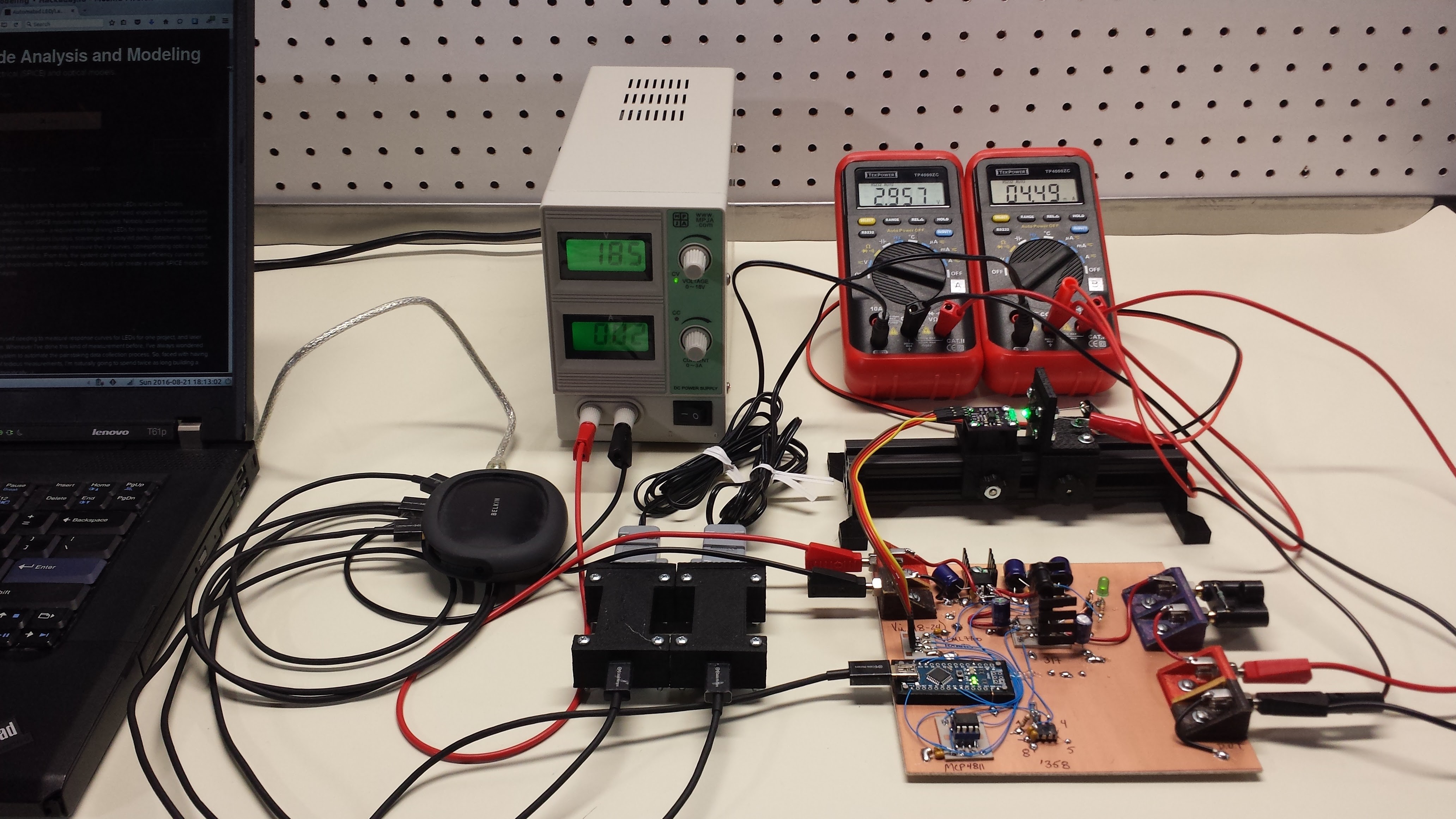 The particular DMMs I'm using have RS232 ports, so I was able to prototype the whole automatic measurement system. The problem with cheap serial DMMs, though, is the difficulty synchronizing them with other processes. I got so fed up with them that I did a whole project (quick as it was) just to solve this issue. Over on #TP4000ZC Serial DMM Adapter, I have a design for an adapter for easily syncing the meters to facilitate this kind of programmatic measurement. Two of the adapters are visible in the photo - they're the black I-shaped boxes in the center

I hadn't thought about this before, but the LED forward-voltage measurement may provide some unique challenges. Since the voltage is a logarithmic function of current, it is confined to a narrow range relative to the current - there's a reason we often quote the forward voltage as a single number (0.7V for a Si diode, for instance). To measure this voltage accurately, you either need a lot of bits in your ADC, or you have to narrow the conversion range to a band around the nominal Vf of the LED. These are 4,000-count meters, equivalent to 12-bit ADC's on any particular range, and I would have liked some more resolution in some of the data (Vf changing by just a few mV at times). I'll have to think about this.

Automated measurements are awesome. Instead of collecting data for a half hour, I set the thing to collect 100 points and went to get a cup of coffee. It took just under 7 minutes to collect these points. Most of the time was spent in the VEML7700 auto-ranging code, which must try a number of long integration-time settings for very low light levels. At "normal" LED output levels, the auto-range code takes less than a second. It might be possible to re-write the sensor code to accept a "hint" that low light levels are likely, and start the auto-range search in a better place.

Finally, I need to think of a good way to produce logarithmic current sweeps. Without knowing the characteristics of the LED beforehand, it's tough to predict what voltage to set to produce the next step in a logarithmic current sequence. It might be possible to create a quick model after each point is taken to predict the proper voltage - the LED model could be built iteratively as each new point is taken. Plotting at the same time (using matplotlib in python) would be a nice way to show how the model evolves. For this purpose, a very simple model for the I/V curve could be used.

I forgot to post something about the data I was able to collect with the prototype. Here's a plot of the relative intensity of a 5mm LED I've been playing with. The solid cyan line is data I digitized from a plot in the datasheet; the magenta points are data I collected with the system. Where the data is available on the datasheet, there is excellent agreement, but this system can collect data outside the range of the datasheet plots. I only ran the system to about 10 mA max; otherwise, points could be collected up to and beyond the datasheet limits. Of course, if you don't have a datasheet, measuring this data is the only way to get it. 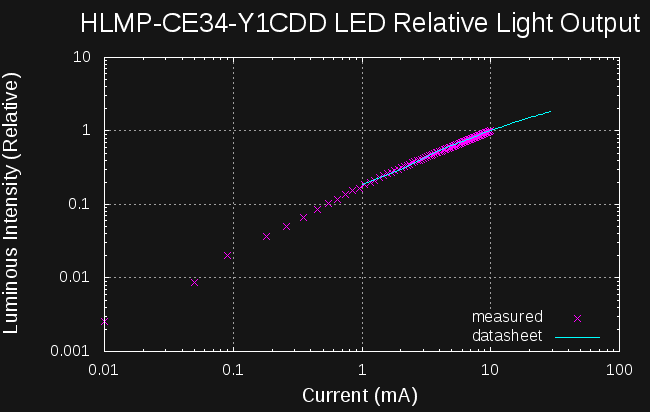