The goal of this project is to create a mid-air 2D display. Previous 2D displays have been made using steam or fog as a projection screen for a traditional image projector, but this requires a difficult-to-generate fog projection plane. Using a ring of scanned modulated lasers, however, it's possible to approximate arbitrary light intensity distributions confined to a single plane in space. Any scattering material can then be used to make the display visible; there's no need to confine the scatterers to the image plane. With enough laser power, the scattering from air and suspended dust alone should make the display visible. With lower powered lasers, a uniform 3D scattering media (fog or smoke) should work.

This is a project I started back in 2013, but haven't found the time to devote to making it happen. To date, I've simulated the display and come up with a preliminary physical design, but have yet to build one. I was going to wait until I had some more progress to report before writing this up on hackaday.io, but I saw the string portraits on HaD, and figured this would be a good time to start documenting the project - it might just give me the kick I've been needing to start this effort back up.

The idea is simple: a number of laser diode modules are fitted with simple motor-driven scanning mirrors. This would create a "sheet" of light from an unmodulated laser. When modulated, however, the laser can now produce a variable "fan" of rays. The rays from an entire ring of lasers overlap in a central circle, where the beams are scattered by the air, naturally occurring dust, or a volume of fog or smoke. When many beams overlap in an area, more light is scattered toward the viewer's eye creating brighter regions, thus forming an image. The contrast ratio of this device is limited by the number of lasers in the display; my simulations show that you could produce a usable display with a few dozen lasers.

Here's a simple diagram of the proposed scanning assembly - one of these will be required for each laser. To scan the beam, a small motor (pager or micro quadcopter) is coupled to a 45-degree mirror. A photodiode senses when the beam crosses a reference position, so that software driving the laser diode modulator can synchronize the laser modulation with the motor. I envision letting the motors run freely, then using a software PLL to synchronize the data fed to the laser diode modulator (there's no need for the lasers to all be synchronized at the scan level). 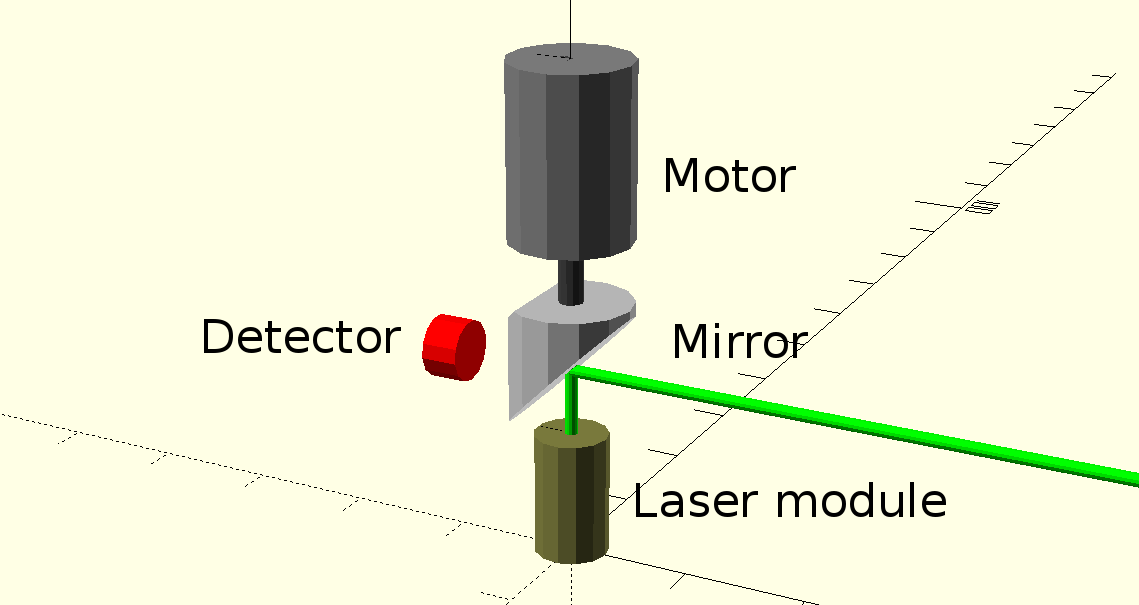 I picked up a hundred red laser diode modules cheap on ebay for a prototype. Although they're not very powerful, and the red color isn't great for viewing, I think I can make a workable prototype with them. Once I prove to myself that it's worth doing, I can invest in some doubled green modules, which are much brighter but more expensive.


The simulator is interactive, and lets you load different test images and change the number of lasers and the number of angular positions scanned by each laser. Here's an example of an input image and the result with a 36-laser display (obviously, I was thinking of a clock mode): 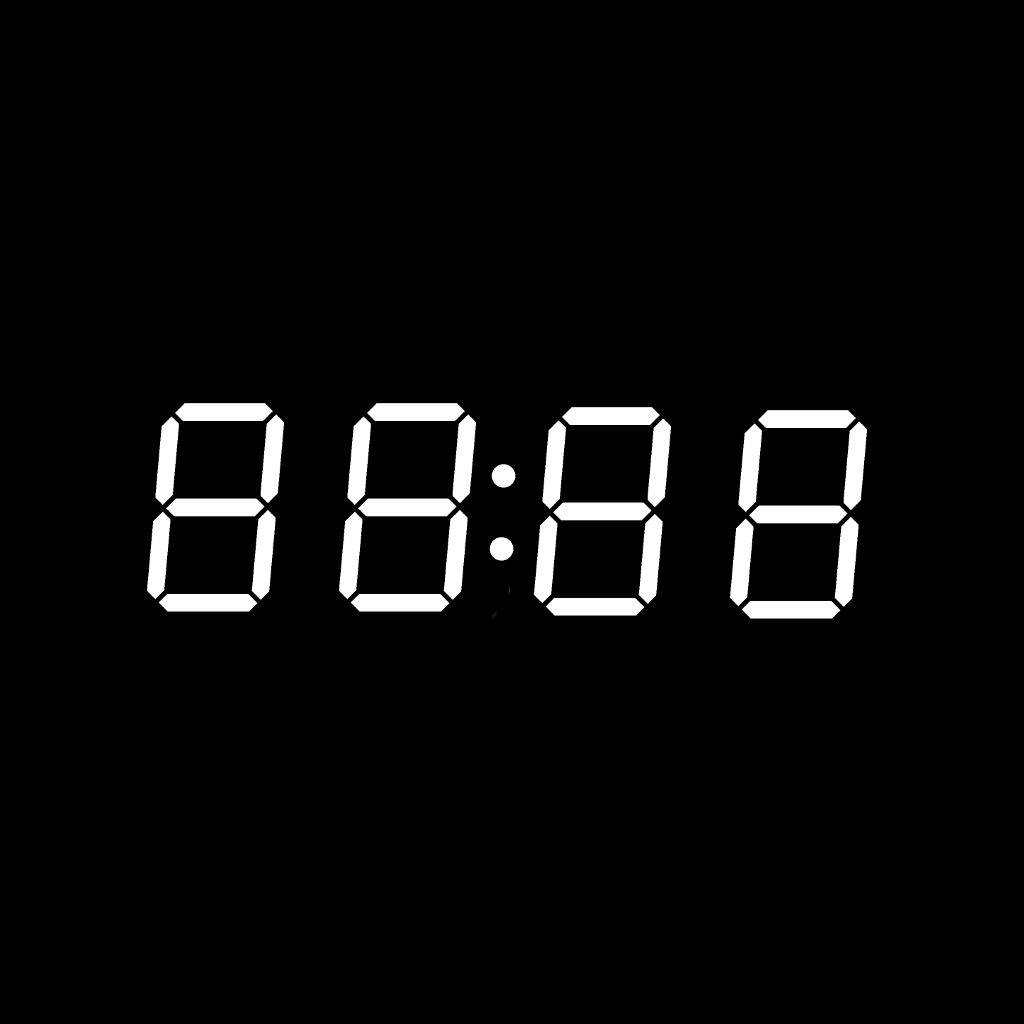 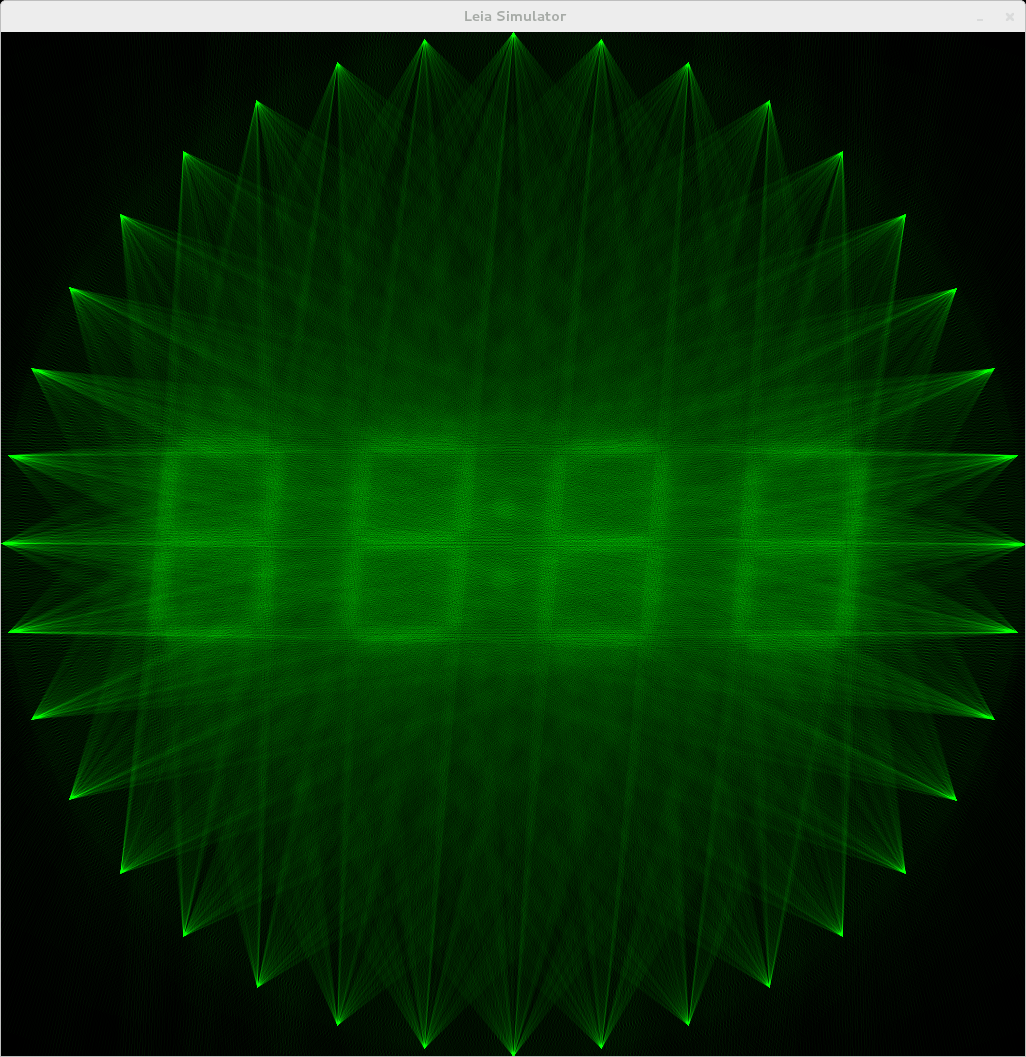 Unfortunately, when I wrote the simulator in 2013, I used some code that I'm not free to open-source. Looking at it this morning, it uses an old (v1.2) SDL library, which isn't compatible with the new 2.0 version, so it needs a re-write anyway for further development. While I'm at it, I can re-implement the non-free portion so that the whole thing can be open-sourced.

The simulator uses a very simple algorithm to determine the intensity of each projected ray. Each ray path is traced through the target image, and the total sum image intensity along that path is recorded. This intensity is then used to set the projected ray intensity. You might recognize the back-projection algorithm from Computed Tomography (CT) scanning. The idea here is similar, although I haven't worked out a full treatment of the math yet. It's quite possible that the quality of the images could be improved by applying a proper filter to the target image, similar to the filtered back-projection algorithm used in CT.

Quite the interesting project! Did you make any progress since 2018?

That's the kind of project I'm here for :)

Yeah, if I can just motivate myself to build the first prototype, the rest should be easy:-)

if only they made MEMS spatial light modulators... :)

@helge I drool over DLPs from time to time, but the price never seems to drop.

on the cheaper side, there are piezo bimorph and trimorph actuators.

They also make them with resonant flaps for fan applications :) I imagine one could as well find a way to attach a very small mirror and spring to the basic actuators to get 100-200 Hz resonant motion.

If you're really cheap you might want to consider sticking a small triangular acrylic prism onto a small motor shaft :D

Have you considered just having, rather than multiple motor drives, all the mirrors on a shafts through bearings with the same size timing pulley at the bottom?  That way, you could drive them all with a timing belt from a single motor, and they'll stay in sync.  Position sensing could be centralised to a single pully on the loop.

It would be convenient to have everything mechanically synchronized - but the practicalities of what I can cobble together are the problem.  I think I can design 3D-printable mounts for the motors and lasers and mirrors that might take a little tweaking (adjustment screws) to get aligned.  If I can get that to work, I just need to print a bunch of them to get the prototype going.

Having made a first proof-of-principle would be some good motivation to think about improved mechanical arrangements :-)

I've not put a huge amount of thought in to it, but I would have thought the overall 3d printed mounting arrangement would have been the same, just replacing the motor with a pulley gear.  You could still do the alignment teaking then tighten the grub screw in the pully when it's pointing at the right angle.

for the laser sweep .. rather than individual rotating mirrors, you could have a "carousel" of cylindrical lenses that sweep in front of the lasers .. then you have one motor.  If the lenses are at the same angular pitch as the lasers, then the lasers will be automatically synchronized .. and if you have, say, 100 lasers (and 100 lenses) the carousel can turn pretty slowly.

An alternative might be faceted mirrors on a gear assembly.

I originally envisioned a line-array of lasers rotating around the display like an MRI machine - then I remembered that my mechanical fabrication skills and resources are primitive compared to experience with software and circuits.  So, a software PLL seems more within reach than complicated mechanical designs.

I like the notion of multiple cylindrical lenses, though - and the fact that the rotation can be slow.  For a scaled-up design, it might make a lot of sense.

Actually, maybe a line of lasers rotated around on a lazy-susan bearing would be OK for a long-camera-exposure pre-prototype experiment.

Wow.  I need to think about that for a little bit.  Maybe a single stepper could do it - it seems like the quickest solution to a first actual test.

The 2015 Hackaday Prize
POISED is a laser scanner - a camera and a projector: captures images using one laser, and in real time another laser renders those images
Project Owner Contributor