Today I'll share the solution of the Thor's Inverse Kinematics.

We have to bear in mind that the point that the IK will position won't be the Tool Center Point (TCP) but the 5th joint axis' center (Pm). Therefore, given an orientation and position of the TCP (noap_tcp) and because the 4th, 5th and 6th joints cross in a single point and the TCP's Z axis crosses Pm, then: 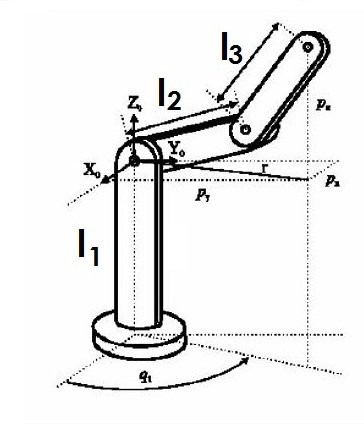 Geometrically we obtain the following equations:

Thanks to the forward kinematics the Pm's position and orientation due to q1, q2 and 13 can be obtained. As the position is no longer needed, it can be possible to operate only with the R:

Which is the same as:

I have used the SymPy tool (mentioned on the Forward Kinematics log) to do the symbolic calculus. The results are the following:

Beeing part of this project

unfortunately the results are not shown anymore. It says "Invalid Equalation".

Hello AngelLM, what is the SymPy code used?.