One feature of the algorithm that's been missing so far is a proper rotational symmetry. I've already implemented a point symmetry to get the same result as a 2-fold rotation; it's fast and the code is simple but not generalizable to n-fold rotations. What I find especially cool is 3-fold symmetry. Here I'll explain how I coded the general symmetry and present some results.

According to the original algorithm, the rotational symmetry is applied to the activator and inhibitor arrays of each scale, before looking for the best variations. Each pixel/array element is averaged with its symmetrical points around the origin of the image. The number of averaged pixels depends on the symmetry order. First we'll see how the symmetry works in practice, then to which part of the image it should be applied, and finally an idea to organize all this data.


For the moment, let's forget the Turing patterns, forget that we will work with data arrays and just focus on the point symmetry in a 2D coordinate system. We have a picture, assumed square, with a width 2r, and the origin at coordinates (0, 0).


Let's also assume that we want the picture to be point-symmetrical around the origin, with an order of 4. That means that the image will be four times the same sub-image, rotated around the origin. 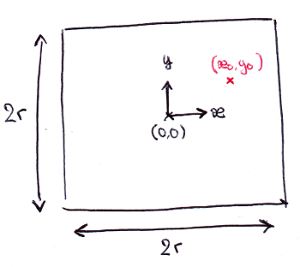 In general, for a symmetry order s, the rotations of the (x0, y0) point around the origin will be the angles

Obviously, s = 1 is a special case with no symmetry at all.


Concretely, how to compute the coordinates of the points symmetrical to (x0, y0)? Knowing the angles θ, the rotation is done with

Looping through the values of i, it's easy to make a list of all symmetrical points to (x0, y0). And if these two formulas are applied to all points in the appropriate portion of the image (for a symmetry order s = 4, that's the top-right quarter), we can list all the symmetries in the image.

For the project, we have to apply these rotations to a 2D array (activator or inhibitor) and average the values of the symmetrical points. For example, let's work on the activator array act[x][y], again with s = 4:


Here, step 1 is done on-the-fly. This requires computing rotations each time we want to symmetrize an array. But if the symmetry order is fixed, it's more elegant to make a list of symmetrical coordinates at the beginning and just go through the list when repeating steps 2 and 3. Besides, it avoids computing cos and sin all the time, which could be computationally expensive (thanks to Jason Rampe for the idea).

First caveats about the rotation applied to a data array: the (x, y) values are integers, but we compute them with cos and sin functions which give floating-point values. So there are lossy conversions happening, and the rotation/symmetries are flawed. This isn't too worrisome if the resolution is large enough, because the couple of pixels badly symmetrized will be lost in the sea of correct ones. But it's still important to remember that the integer operations are not perfect. In addition, we're applying a rotation to pixels of a square image, so some of the rotated coordinates will be out of the image. For instance, a pixel in the top-right corner rotated by 2π/8 might end up out of bounds (see below). 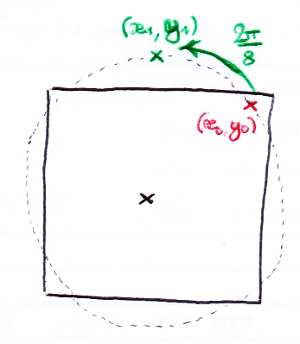 Second remark: since the image is represented by a data array, the origin isn't at coordinates (0, 0) but (r, r). The coordinates have to be translated for the computations to be correct, but it's very simple so I won't explain it in detail.

Third remark: like I said before, we only need to compute the symmetrical points of one part of the image, let's call it the "main zone". For s = 4, it's enough to make lists of four points: the first one being in the top-right quarter, and the three other ones being symmetrical to the first. For s = 2, just make lists of two points: one in the top half, the other in the bottom half. In the picture below, the main zone is red and the symmetrical zones are green.

The question is: How do we find which coordinates need to be part of the calculations? For s = 2 and s = 4, it's pretty simple because the main zone of the picture is square. But what about s = 3, s = 8? It's not so straightforward. Let's talk about that.


The main zone is one s'th of the total image area, and it is always part of the top half of the image (arbitrarily). For example, with s = 3 and s = 8:

Let's get back to a square image of width 2r and origin (0, 0). We have to find a general description of the coordinates included in the main zone. The first two conditions are simple: a point at coordinates (x, y) is in the main zone if x ∈ [-r, r] and y ∈ [0, r]. That just describes the top half of the image.

Since the limit line is straight, its equation is simple to find. It's

So the third condition on (x, y) for the point to be in the main zone is:

In practice, the case s = 4 doesn't have to be coded as a special case, it can be integrated in one of the two others.

So far we know how to check if a point's coordinates are in the main zone, and how to find the coordinates of its symmetrical points in the rest of the image. The number of points in the main zone and the number of symmetries for each point both depend on the symmetry order s and the picture size. In addition, because the image is square, not all rotated coordinates are within the picture. (For the moment I decided to not include them in the symmetry calculations at all, but another possibility is to wrap them around.) This means that in general, the program doesn't know the amount of data to store before runtime. So the data must be stored dynamically, and since we're dealing with lists, I chose linked lists as a data structure. 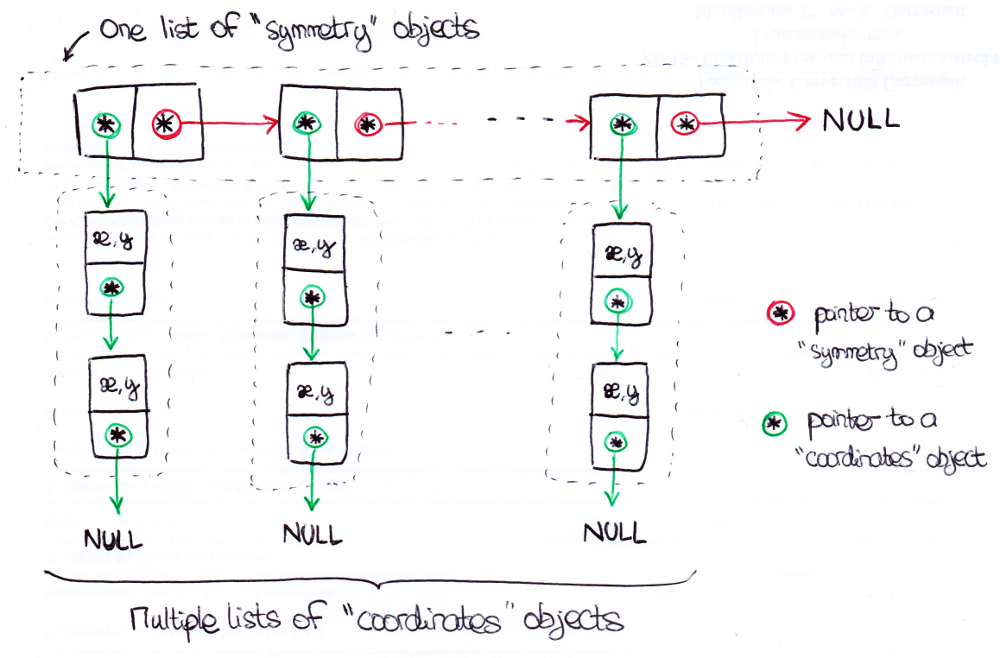 
At the beginning of the program, before generating anything:


And during the image generation, when applying the symmetry to the activator or inhibitor arrays:


The results are PRETTY AWESOME if you ask me: There are some artifacts here and there, though. You can see that especially well on the bottom-right picture. I'll have to find out where that comes from.