I decided to put this project on hold, even if it's a bit buggy and not as good as I want. It works decently, I already learned a lot along the way, and I want to move on to something else, so this is a good time to consider it somewhat done. And I'm not selling it or anything so you don't have a right to complain :p

So far all the image parameters (e.g. its size or the number of patterns) are defined as constants. So all the arrays (e.g. the 2D array that stores the image) are statically allocated. But I wanted to be able to call the program from a script and pass the parameters via the command line or via a configuration file. In this case, the parameters wouldn't be know at compilation time, and all the arrays that depend on them would have to be allocated dynamically.
I tried to implement this and there are two problems:

Concretely, the problems that remain are the following:

I made quite a lot of design mistakes at the beginning, and I realized the consequences when it was too late. I see that as a success because next time, I'll be more careful in the design phase. Incidentally, I just started reading "Code Complete" by Steve McConnell and he describes software design as a wicked problem, i.e. a problem that you have to solve once, mess up, and learn from your errors to solve it right the second time. That resonates with my experience here. Specifically, the mistakes I made:

I also learned about Turing patterns, obviously, as well as doxygen and makefile. And I had to think a lot about pointers, which is always good.

Like I said earlier, I want to move on even if the source is still buggy. On the other hand, I'm not going to let something half-baked run around on the interwebz without ever correcting it -- I have a reputation to maintain. (No? I don't? Damn.) I'm definitely going to use what I learned here in another project featuring Turing patterns. Something über-fancy. In the meantime, I generated a cool single-scale pattern to decorate my guitar, so I'll leave you with that. 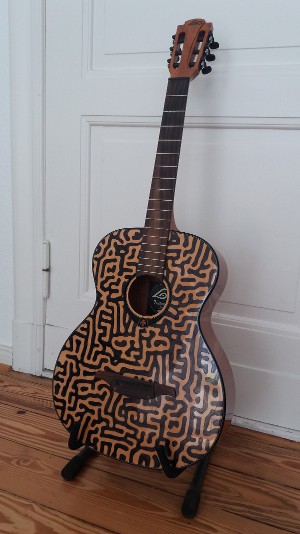