Next up was to replace the existing halogen lighting in the kitchen with some custom LED lights. I live in a log cabin so lighting the wood itself is a nice effect. In addition to the LED spots I wanted to use some LED strip lighting to light the ceiling lumber. I hoped that would make a slightly more diffuse lighting in the room. I designed another driver board. This board now used the Nordic NRF24LE1 radio + 8051-core with new, more modular, code and contained 4 350-mA linear constant current regulators and single low-side MOSFET switch to dim the LED strips. I choose to use a linear constant current regulator for several reasons. I am using fairly high-frequency and variable modulation (a variation of bit-angle or bit-value modulation) to control LED intensity and I have seen it make switch-mode converters "sing". Some of them also have a hard time turning on and off fast enough for the changes at the low end of the intensity scale (the modulator implements some non-linear transformations to account for human perception of brightness which results in very small on periods for low intensity settings). Finally they were a great match for a 12 VDC system powering strings of 3 LEDs in series. 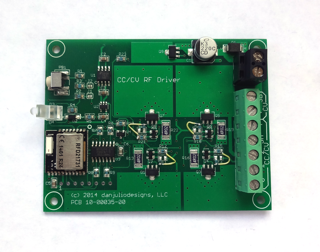 The yellow wires are a modification of the constant current drivers to be slightly more efficient I figured out after I got the boards back. The boards work well although I didn't follow the RF layout instructions for the RF module and performance falls off terribly at certain frequencies. I would need to spin this board if it ever saw production. 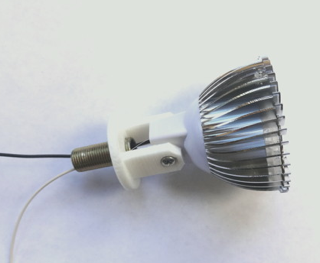 At the time I could find all kinds of components for MR16 LED lights at dx.com and ordered a bunch of heatsinks, lenses, LEDs and LED boards. I bought both single- and 3-LED heads. I designed and 3D printed a slightly jenky custom mount to allow each head to be movable. It screwed through the base of the Chinese fixture and used a threaded pipe to screw into the overall fixture.

The fixtures themselves were pretty simple. A basic wood box that contain the controller/driver and power supply. LED strips are mounted around the edge, hidden under the front surface and the LED heads are mounted on that surface. Each fixture has a 12 VDC, 5A meanwell PSU. 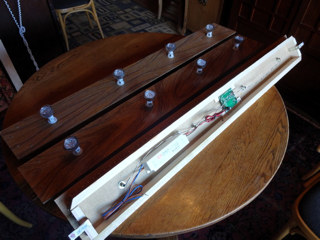 I thought they came out fairly well. The only issue is that the "warm white" LEDs had a slightly greenish tint to them. We are used to it now but it was noticeable at first. Next time I'd pay the extra money to buy a more known device. Each fixture has its own Unit address but they all share a zone address so that they can be controlled as a single unit. A touch dimmer mounted on the wall or a remote that lives in the kitchen provide local control. 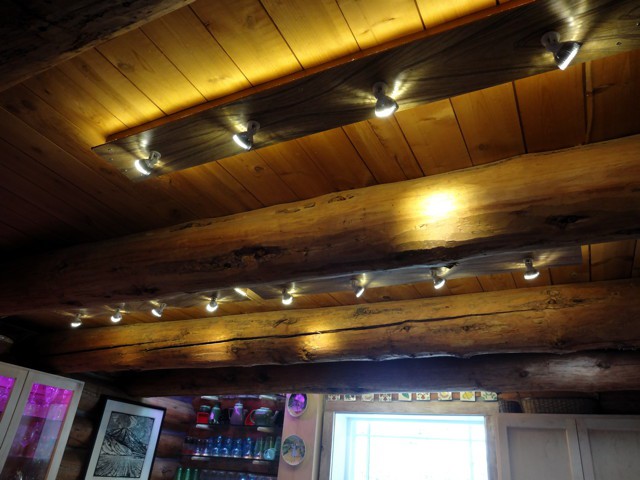 An earlier attempt using the single-LED heads ended up more hidden over the kitchen sink.

A QualColor OEM controller drives RGBW strips in the glass-fronted cabinets and above the glassware in the corner of the kitchen as shown by this terrible photograph. Wireless controls are mounted on the wall and powered by a small AC adapter tucked behind the wood. The button-remote was a quick-and-dirty hack that turns out to be probably the most used control in the house. Nothing easier than pressing a button. I took some existing code and added the ability to send hard-coded packets upon a button press (and then put the micro to sleep). To change the functionality I have to recompile the code. The buttons do things like "All kitchen lights off", "All kitchen lights on at full brightness", "low brightness" and start color wash programs in the cabinets. The touch remote also controls the cabinet lighting and can be used to select a specific color if desired. 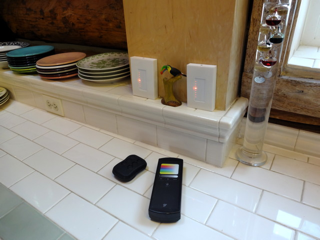