The ergonomics of Keychange have been getting a lot of my attention. It is very important to me that this device is comfortable to use, because if it does its job successfully then it will be in my hands all day. If I get the shape and mechanics of it wrong then I will have a device that is unpleasant to use and possibly even one that could lead to injury (repetitive strain injuries are no joke for people who need to interact with computers all day). So I have been spending about as much time working on giving it a pleasant shape as working on the electronics and programming components that will make it actually work. Key to the effort are physical prototypes that I can hold in my hands.

For a while I was sketching out designs on paper and making mock-ups in 3D modelling software. This is usually how I approach the initial design of physical objects. But the sketches were difficult to produce because the shapes I wanted were organic and 3D. It was hard to convey the full shape with just lines in pencil or pen. 3D modelling helped with that problem, but it took much more time and could not let me keep up with the ideas I wanted to play around with.

So I quickly decided to try doing the modelling by hand. Clay would probably be the best material for the task, but I did not want to make the trip to the art store or spend a lot to order it online. I remembered from 1st grade that it is really easy and cheap to make playdough. Basically all you need is flour, salt, and oil. I already had all those things, so I made a big batch and spent a while making different comfortable shapes in my hand. My playdough was not nearly as good at holding specific shapes as clay would have been, but it did a great job of giving me intuition for what good shapes might be. I tried baking the prototypes shapes I made in the oven to harden them, but bizarrely the insides of them turned liquid and oozed out, leaving only a thin shell behind. They were still useful, but not very resilient. 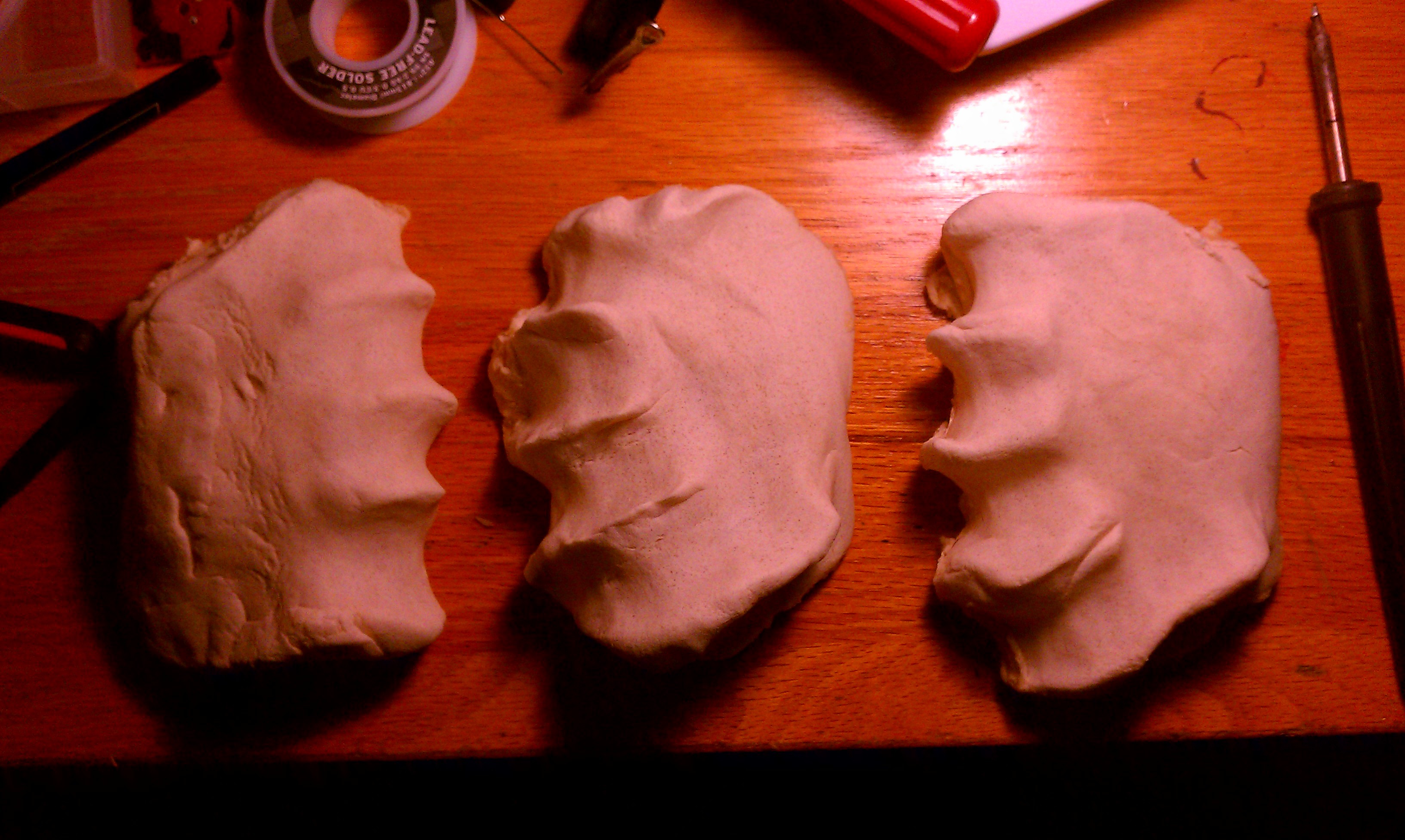 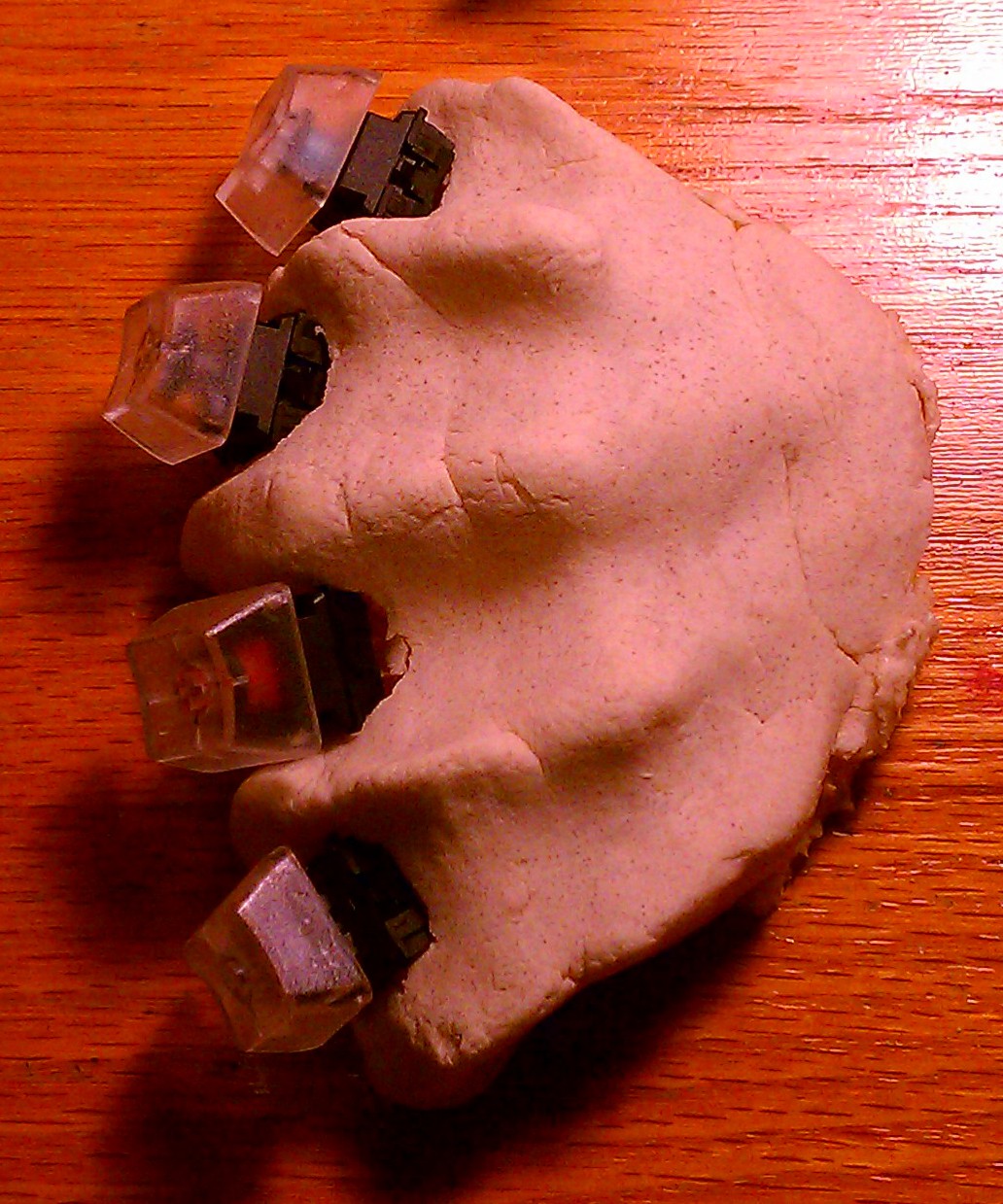 I liked one of them in particular because it was small and especially comfy to hold. I took some Cherry MX switches and pushed them into little square holes that I cut into the playdough shell. It looked pretty weird, but it gave me some more ideas about how it might feel to press buttons while holding a shape like that. Unfortunately I learned that it is really fatiguing to press buttons on a shape where all of the support is coming from the base of the palm. The fatigue comes from the effort required to hold the thing still while pulling a finger down. My take-away was that the final design should have really good bracing against the wrist or even part of the arm. Just bracing against the hand will lead to wiggle room that makes typing feel bad and leads to more energy being expended per key press.

After messing around with playdough I decided that it would be useful to do prototyping in a material strong enough to allow me to mount buttons and electronics and have a working mock-up. So I turned to laser-cut 5 mm plywood. Working in 2D was much faster than working in 3D, but was not as flexible and the designs that resulted were not really comfortable. I explored two designs in plywood: a palm-braced minimal grip and a gun-style grip. I look at both of them as failures because they are not that comfortable to hold. And the gun-grip looks too much like a gun. It probably would be bad to have that kind of association tied to the final design. My take-away lesson is that hand-made fully 3D prototypes are the best when exploring ergonomics.

The process of finding an optimal shape for Keychange has just begun, and many more physical prototypes are ahead.