Connect servos to your ESP8266 dev board.

The projects I'm working with : kits I bought on tindie, or oss project I'm inspiring with

Starting from
$8.00
Buy on Tindie
CRImier has 233 orders / 19reviews
Ships from Netherlands, Latvia

I thought I will try to make some shields for the WeMos D1 Mini, because it's one of my favorite ESP8266 boards. There is already an official motor controller shield (though I can't get it to work reliably), so I decided I will make some servo shields.

Maybe I've worked too long in the field of electrical reliability to put too much trust in the mechanical fitness of a two rows of 8 pin headers to support the mass of an assembly of a rather dense assembly [shield-PCB+48 pin headers+16 3pin connectors+attached cables]. It might be advisable to provide mounting options that take away mechanical strain and stress from the pin headers. Also such an assembly easily draws a lot of current, even if no servo is ever stalled (0.2A x 16). The requirements of an adequate power supply (with sufficiently designed ground) might also be a good thing to be getting aware of.

There is a connector for a separate power supply for the servos, and 99% of the bottom layer is a ground fill. As for mechanical ruggedness, you can always put the shields on the bottom, and the D1 Mini (which is relatively light) on top. But the shield is quite small and feels pretty solid. I agree it would be nice to have mounting holes, unfortunately there isn't much room left for that.

You've got a point. I'm just not a big fan of "shields"  for different reasons.

By the way, an ESP-14 can control up to 15 servos without external controller. This should work even if the integrated STM8S003F3 has a 3.3V power supply.

Edit2 in response to @Radomir Dopieralsk: if you need the ESP8266 serial interface for controlling the MicroPython console you'd be down to controlling just 13 servos (maybe 14 with some tricks).

ESP-14? Is that another module with the ESP8266 on it? How does it do without an external controller, if you can only use 11 gpio pins on the ESP8266, and that's if you re-use the serial pins... Do you have a link?

Ah, I see, so you program the stm8 chip inside. That's nice, but I want to use the esp8266 to run micropython on it, stm8 doesn't work for me.

Just reply to the message one level above...

The ESP8266 can be programmed the usual way through pins 10 and 11 when pin 14 is low. The intent of the hardware design is to use the ESP8266 UART for communication with the STM8S, but it's also possible to use a simple serial protocol to transfer the data for servo control from E_GPIO0 to any STM8S GPIO.

Another option would be to make the STM8S listen to ESP8266 TX and filter out servo set commands from the data stream. There are a few more options. and depending on on-line console communication requirements, trade-offs and time spent on optimizations, anywhere from 13 to 17 servos can be controlled without using port expanders (like shift registers).

Please refer to the discussion here for another take on using the ESP-14: https://hackaday.io/project/16097-eforth-for-cheap-stm8s-value-line-gadgets#j-discussions-title

Thanks for the message level hint :-)

Are you thinking about a PCA9685-based shield as well?

No, I used those with Feather HUZZAH, and I'm not impressed. They only have 16 channels, the I2C registers are a bit complex (enough to need a library for it) and they are actually for driving LEDs, not servos. With a simple atmega I have everything they would give me, plus 4 more channels, and it's cheaper.

I've used it pretty happily in other servo projects but those are fair points. Are you able to achieve better resolution and/or faster frequency with the atmega?

The frequency I'm using is fixed at 50Hz, because that's what the servos want. I can do 1µs resolution at that frequency, which with my servos translates to 0.01° angle (except for a corner case that I just found where two servos are in really similar positions -- then it's more like 5µs).

Don't get me wrong, the PCA9685 is a great piece of silicon and I would use it -- if I didn't write the code to do it without it first. For Tote there is an extra advantage -- I only need one chip for both the robot behavior and the PWM -- though I will be moving away from that anyways.

so, bitbanged PWM on 20 channels with 1us resolution? and presumably serial of some sort? Impressive!

The i2c communication happens without interrupts, so fortunately it doesn't affect the timers.

By the way, making a PCA9685-based shield should be extremely straightforward -- it would basically be just all the connections.

Hmm, it's even more straightforward than I thought: 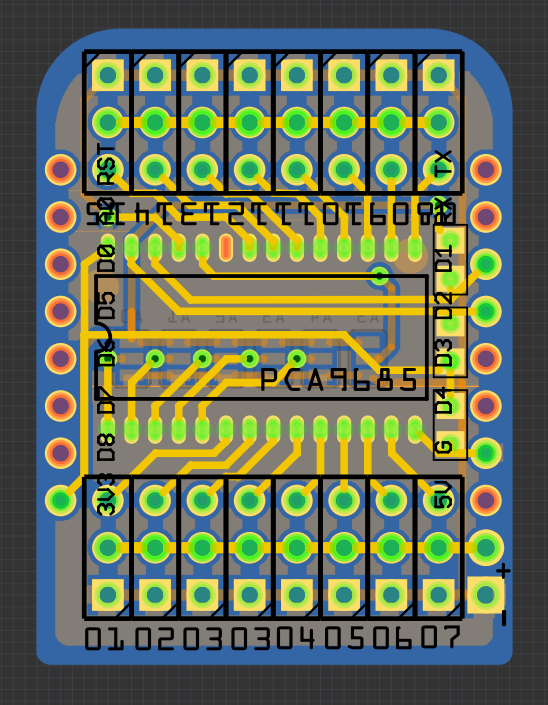 Time to put my stash of SG90s to good use.

I need at least two of these in my life!