My To Build Lost

The list of stuff I want to build, somestuff for the book

Lucid dreams: They can be used for scientific research, mental therapy, personal welfare, and much more. The Lucid Dreaming Research Platform (OpenLD) is an open-source project (GPLv3) that aims to bring the world of lucid dreaming to the Hacker community. This tool aims to assist in inducing lucid dreams and act as a means of communication between the dream and the outside world. This project utilizes an 8-channel EEG acquisition device, with an on-board ARM microcontroller, along with an accompanying software that performs real-time brainwave analysis.

Hopefully, the OpenLD project will spur interest in the area of sleep research and BCI (Brain-Computer-Interface) in the Hacker community. I hope I can help increase more "Hacker" involvement on this topic and help create more "Brain Hack" projects! Right now, for instance, I am also researching on adapting this project into diagnosing sleep quality for Sleep Apnea treatments. 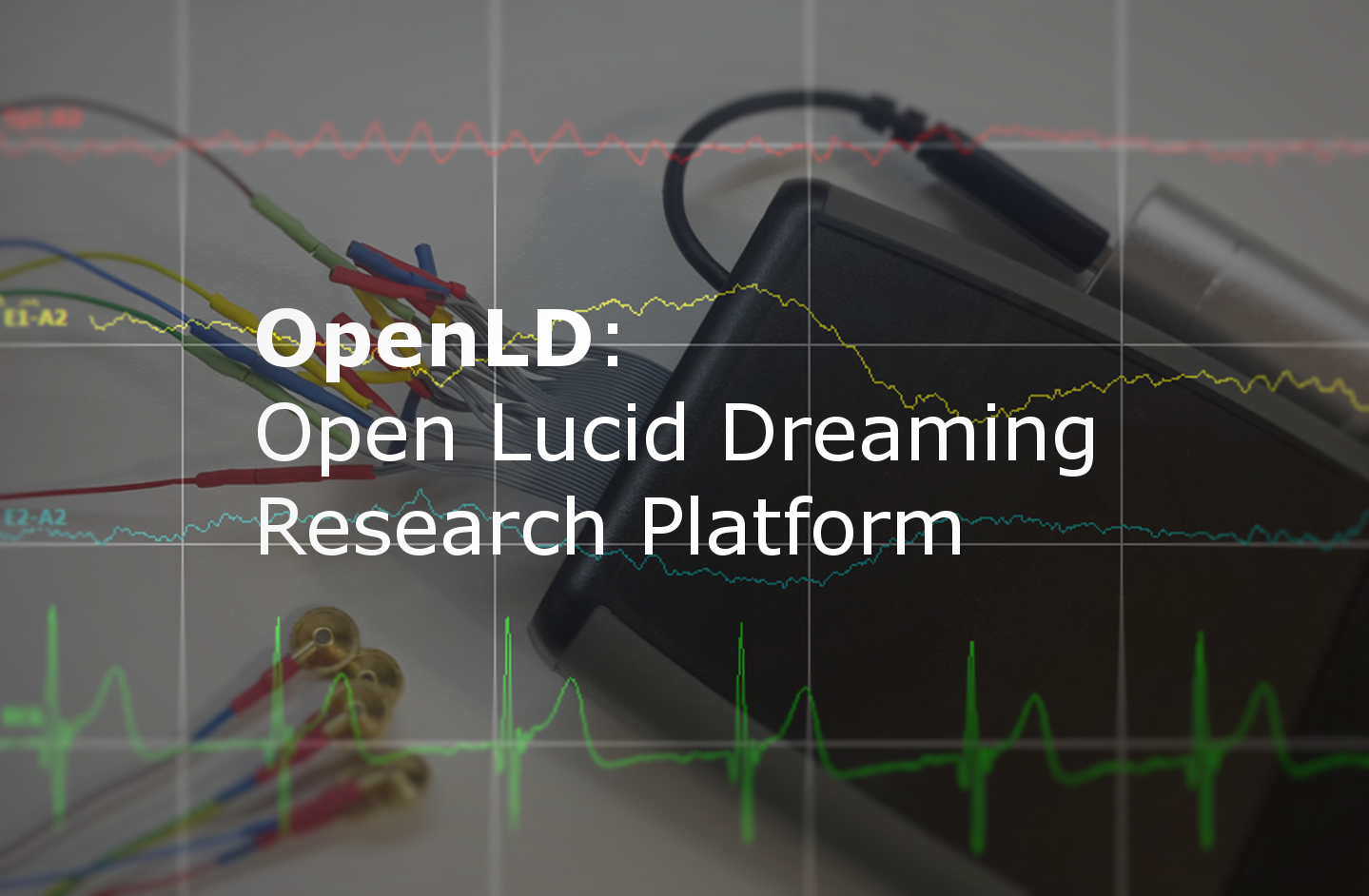 The motivation for this project: Lucid Dreaming

Have you ever had a dream where you realized, "Hey, I am dreaming"? These unusual dreams are called Lucid Dreams: you are aware that you are dreaming. You might recognize this concept from the blockbuster film Inception, which revolves around the idea of lucid dreaming.

With that in mind, what kind of problems and challenges can Lucid Dreams solve?

Therefore, it is clear that lucid dreams not only allow mental well-being, but also brings about promising clinical treatments as well as potential scientific research. Thus, the ultimate goal of the OpenLD project is to make thee opportunities available to everyone, especially to the immense Hacker community.

For more information, you can read through an excellent article about lucid dreaming by HowStuffWorks here.

What is the goal of this project?

While some may be able to experience these unique dreams at will, most of us need extensive effort to become proficient lucid dreamers. Therefore, OpenLD aims to facilitate the process of lucid dreaming for everyone. Also, the project will also attempt to create a eye-signal "communication link" between the lucid dream and the real world, which would be a valuable research tool. For a proof-of-concept, this project will establish a two-way dream-world communication and solve a simple arithmetic problem from within a lucid dream.

There is also a second goal for this project: to increase interest in the subject of sleep research and Brain Computer Interfaces (BCI). I hope this is an intriguing example of how anyone can develop an automated BCI system that allows neuroscience research and that the OpenLD project will inspire you guys to try develop your own custom Brain-Hacking projects!

How does this work?

When we sleep, we go through a series of different sleep stages, with one of them being REM (Rapid Eye Movement) sleep. This is when dreaming takes place. (Voss U. et al.)

OpenLD will analyze the EEG brainwaves and EOG eye signals to detect when the subject is dreaming. It will then trigger a stimulus (alarm, lights, etc.) in order to wake up the dreamer or create a cue to help the dreamer become aware that he/she is dreaming. In Lucid dreaming jargon, this tool will help the dreamer to induce lucid dreams through WILD (Wake-Initiated Lucid Dream) or DILD (Dream-Initiated Lucid Dream). These terms are described by Stephen Laberge and Donald J. DeGracia in the article here. (DeGracia et al.)

One important peculiarity to note is that our physical eye movements correspond to our dream during REM sleep. For instance, if one looks to the right in the dream, his/her physical eyes would do the same. (Laberge, Stephen) Therefore, we can use this to create a communication link between the two worlds through a Morse code-like system. In our case, the OpenLD platform will detect electrical eye movement signals (EOG, Electro-oculography) for in-dream communication.

What is the plan?

The primary hardware for this project is going to be an Electroencephalogram (EEG) device. This will be used to record and analyze brainwaves during sleep in order to induce and study lucid dreams.

The software is the most important and challenging part of this project. A program that analyzes the brainwaves...

Hi, I was reading your blog lately, and I have a really specific question. You mention this about your interrupt for sending the data to the bluetooth: "Meanwhile, interrupt EXTI0_IRQHandler is triggered when 250 samples are received in the buffer, hence every second", if you are having 250 SPS that means a 4ms period, how is that you send the data every second?

I'm curious, roughly how much do all the parts cost in total? I doubt I could ever make something this technical given my very limited experience with hardware, but it's intriguing nonetheless.

i see your link .. but i want to change the codes and couldn't open it with any compiler  .. atollic compiler show me this error "Failed to parse IAR project format file"

how change the code ??

Hi jae! which compiler you use for STM ?

Can you give some hints wich electrode ports to connect to?

the ADS1299 Led seems not to be blinking - I had to buy replacement for OSC1 since they not had the recommended one in stock replaced with http://www.mouser.com/ds/2/268/DSC1001_Datasheet-775857.pdf

In the schematic pdf,  PIN1 from osc1 supposed to be "pin4"  on the picture in this project your PIN 1 from osc4 seems on pin 4 from schematic, is this correct?

The ADS1299 LED is not blinking because it is not supposed to blink :). I haven't coded anything to turn LED1 on. The LED that blinks every 1 second (LED2) tells me that the ADS1299 is working and acquiring data at 250 samples per second.

However, you shouldn't be able to see anything if you connect to the board via Bluetooth. You need to change the RN42 default baudrate (115200) to the OpenLD's baudrate (230400). Check the instructions on how to do this

Note: Can you check if the supply rail for the STM32F407 is 3.3V? There was an error in the documentation that showed the wrong part for the voltage regulator (It should be TPS73233 NOT TPS73225. I fixed this error now). Also, make sure the S4 jumper is shorted, as stated in the instructions above!

Thanks! Please reply if you have any other issues!

changed baudrate en BT name, all seems ok. Need executables now
supply is 2.5 volt.  So only need to change U5? or U3 also?

Orderd some pcb's and components and build one. Now stuck at programming the MCU. Any hints on that?

Hi! In the past couple of days I've been writing documentation for this project. I'll be uploading full instructions on how to build the hardware, compile & burn the firmware to the MCU, and use the OpenLD software today. I'm sorry for the delay :(. Thanks!

Sorry for the late reply! That is strange, as my manufacturer (Hackvana) did not complain about any issues with the outlines. I'll try to look into this issue and will get back to you as soon as possible.

Hi Jae! Great project, congrats! I would be interested to join you in the development. I started the Hungarian Lucid Dreamer's Club (https://www.meetup.com/Tudatos-Alom-Klub-Budapest/) 3 years ago so I am in costant contact with lucid dreamers, and I also into C++ and improved the EDFBrowser myself (https://github.com/andrasfuchs/EDFbrowser/wiki) when I did my own experiments. Drop me a line if you are interested in any kind of cooperation, I would be glad! Cheers, Andras

Thanks! Sorry for the late reply. Right now, I am mostly spending my time documenting my project and improving various parts of my projects here and there. Just to let you know, right now, I am currently planning to support OpenBCI series of hardware for my program. I will keep this project updated as I go. Again, thanks for your help!

Yes I actually follow her studies very closely. They are very interesting; I've cited her study in the "Details" section above as an example of how lucid dreams can be used for scientific research.

Concerning the famous tACS 40hz study, I have actually designed a tACS device, but the project is currently in limbo. I am very interested in revisiting this idea, so I'll give a heads up if I manage to do so.

Soon I will start with my team Tacs. Is still very poor. When I start I will publish here. It will be a pleasure to know your opinion.

I think the most important thing of all is the ease of use of the equipment, because it is for use in sleep. So the electrodes should be comfortable to wear. Greetings.

Voss's study is rather deeply flawed when it comes to really inducing lucid dreams.  She came up with her own scale of different attributes of dreaming, and what she decided to define as a "lucid dream" was missing the key attribute of the dreamer fully realizing that he's dreaming (this attribute did *increase* with TACS, but still well below the range of the attribute for non-lucid dreams)!   There are in-depth discussions of this study on lucid dreaming sites like DreamViews.      TACS has not yet proven itself to be even a somewhat useful EILD (electronic inductin of lucid dreams) approach.

Thank you for your interest. Electrodes not-contact build on LMP7702MM, I encountered trouble when multiplexing can not, namely, the output of the electrode is 4 lines, including (VDD, Vref, Vout, Vss) my project need 4 channels to record brain waves, the region applied to the prefrontal region, namely the coordinates of the electrodes (Af7 / FP1 / FPZ / FP2 / AF8). I use location FPZ reference electrode, but I can not communicate is the output of the electrode with the input of the ADS1299. you can help make that happen I do not! thank you. My email (orscosp@gmail.com)

Is it possible if you can provide a picture of your schematics through a Hackaday private message? I'm afraid I won't be much of help if I do not know the hardware configuration of your ADS1299. Sorry for the late reply by the way :(.

Hello, I am working with the ADS1299, and I'm interested in the non-contact electrodes, but I did not get the channel coupling, you can help me do it not?

I have actually experimented with non-contact active electrodes and built some working prototypes. The electrodes I have built are based on the LMP7702 op amps, which was inspired by a study I read somewhere....

Although the electrodes that I have built works very well, I had problems securing them onto the scalp (Tried using headbands but didn't work out). This is why I am currently using passive electrodes, but maybe in the future I will go back to them.

I will definitely upload build logs, with schematics and board files, regarding active electrodes soon. Meanwhile, I can try to help you out. Can you specify what you mean by "channel coupling"?

How does this work?

I have updated the information in the project details above. Go check them out!

14.8k 516 64
A real life player tracking system, that will give users access to a map of everyone else in the area.
Project Owner Contributor