Assistive input device for interacting with adapted toys and tools.

I heard the Thomas Edison made 1,000 failed attempts before inventing the lightbulb sound byte over and over during grade school. There are a lot of anecdotes describing the hardships and long odds entrepreneurs overcome in the course of becoming successful, and I feel as though hearing them without some experience makes it difficult to really appreciate how much effort it takes to shrug off negativity.

That's my guess anyway. I wouldn't know because I haven't had the displeasure of being drug through the mud by anything in life yet. Even so, I do know that just the smallest words against you can stand out at the end of the day and make it a bit harder to wake up the next morning and keep doing what you do.

The Hackaday Prize rounded up some feedback for Clunke recently. This has been a point of anxiety for me since submitting the project. I want design reviews. I want useful criticism. But I worried a lot about what might be said. I guess it's just the syndrome that happens when someone goes from isolated tinkering to the internet community.

Anyway, here's pretty much the only negative thing that was said:

So what if someone shitposts? Why does it bug me so much? It probably took, like, 7 seconds to leave that comment. And I've spent many minutes now stuck on it, trying to ignore this thing I read online that makes me feel bad about my project. It sucks. I have mad respect for people who deal with real rejection and come back from it time and time again.

Luckily, the majority of the feedback was legitimate, and concerned things that I ought to keep and eye on while working on Clunke:

My knee jerk reaction is that, no, Easy Buttons won't work. The above comment is just being dismissive and I should ignore it. Besides, I've taken one of those Easy Buttons apart before, and the mechanism is really space constrained and oddly design. And there's not a good place to wire a switch in, unless there are test pads on that PCB... Hrm... Maybe? Just maybe it could work.

That comment points out an important aspect of making AT switches: perhaps 3D printing them is both more difficult and more expensive than buying some generic button and modifying it. Maybe is good enough odds for me, and I'm honestly just curious, so I picked up an Easy Button from the local Staples: 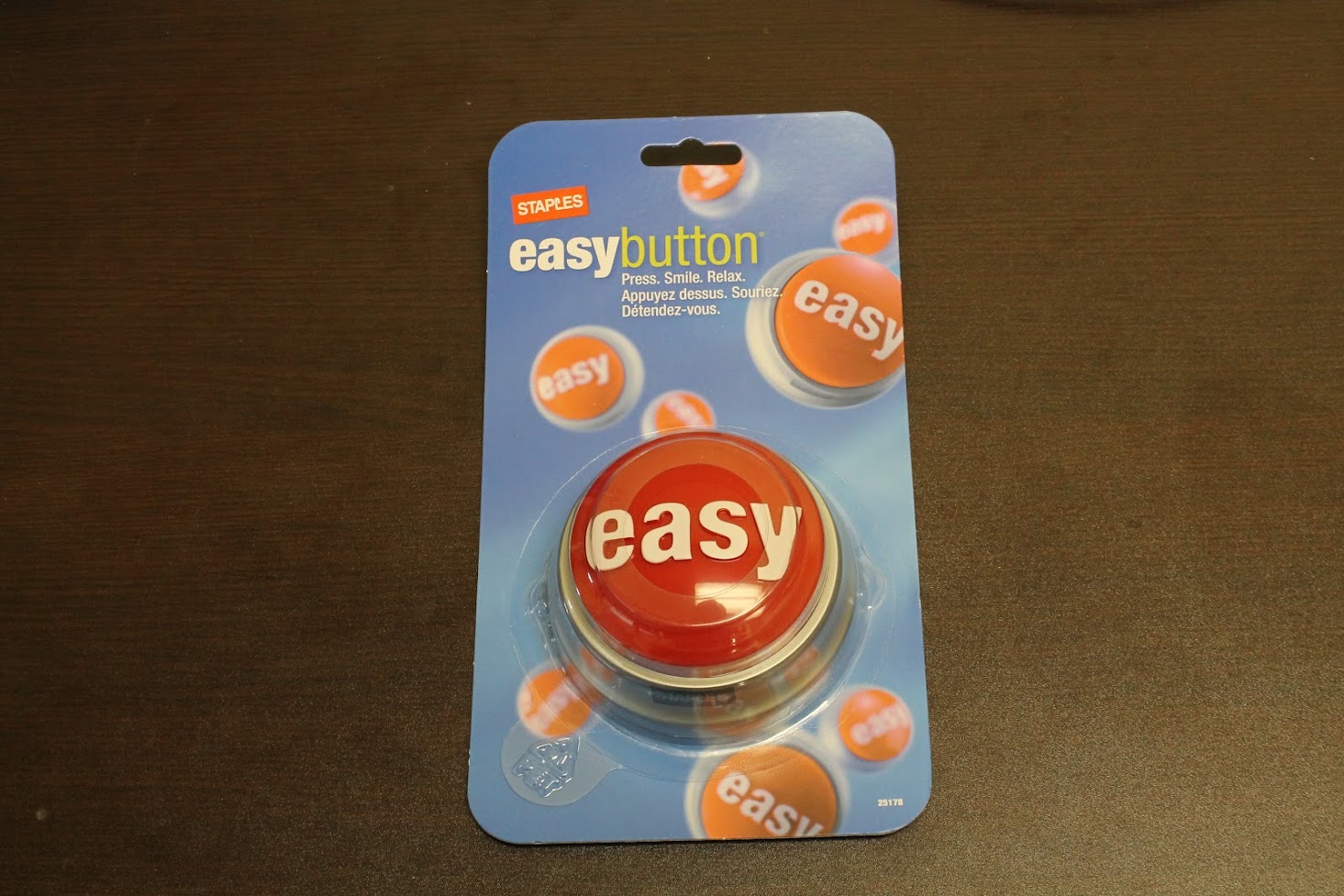 Disabling the speaker is pretty straightforward: 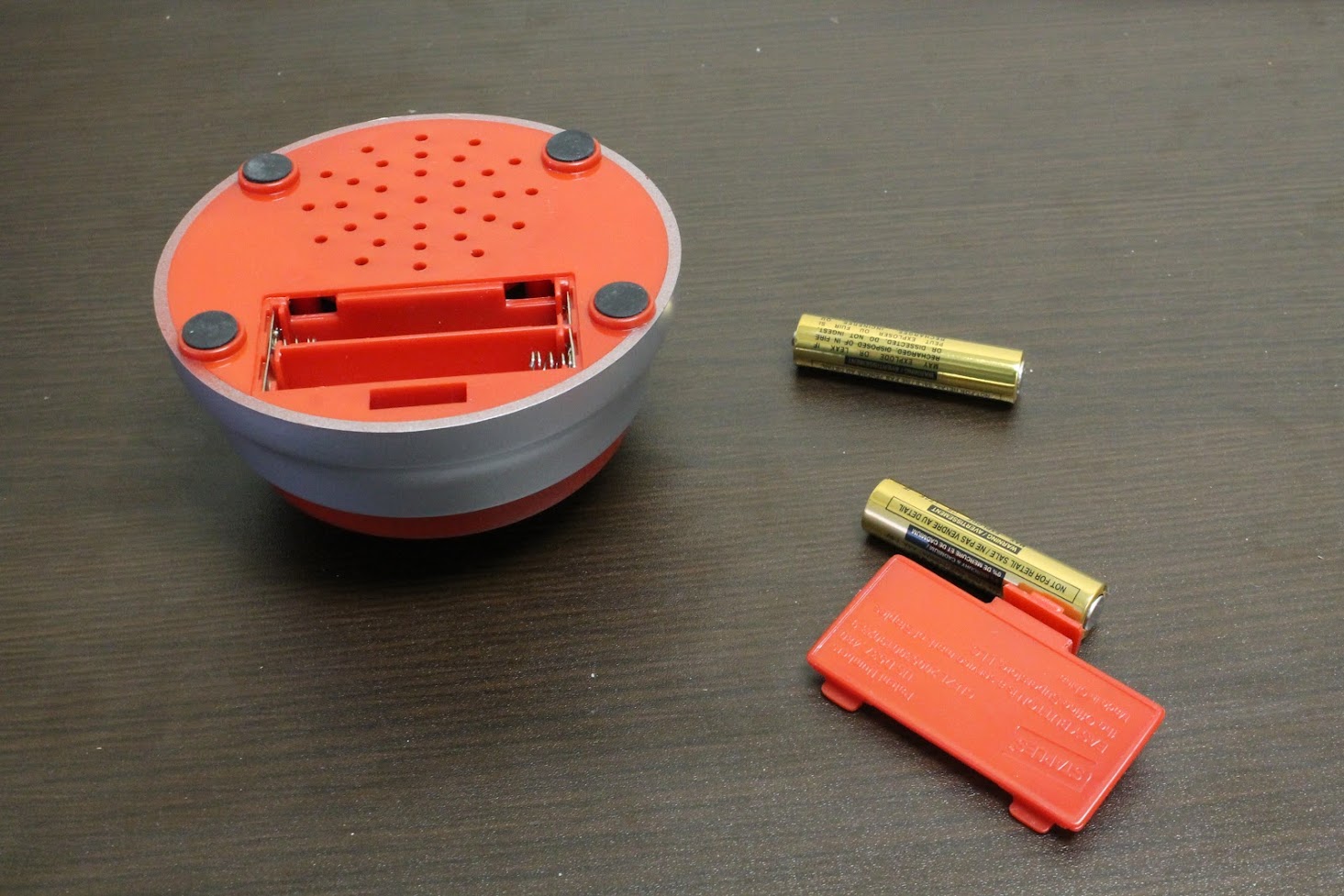 Remove the screws under each rubber foot: 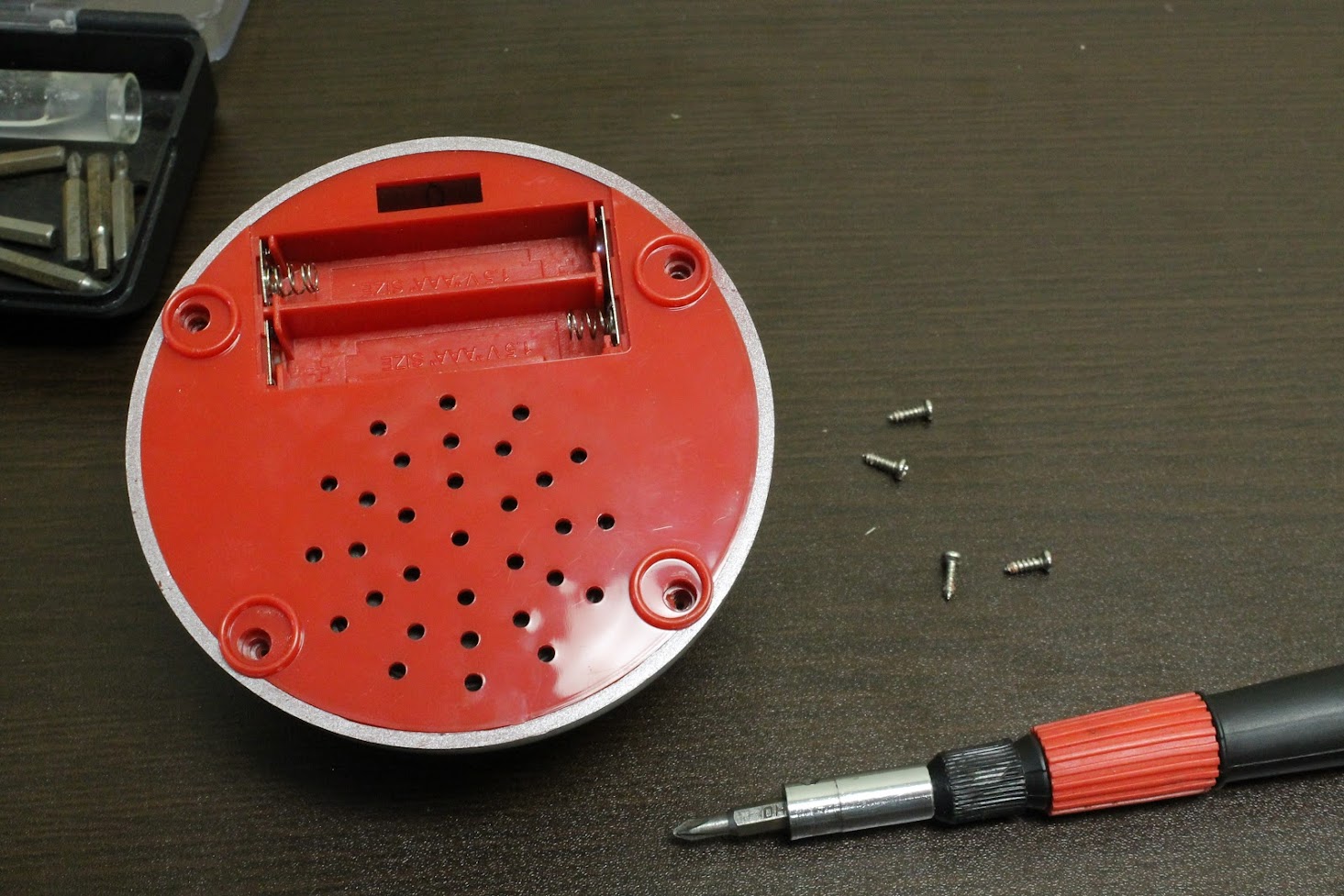 There's the mechanism. We're in luck, the PCB has nice points to solder to! 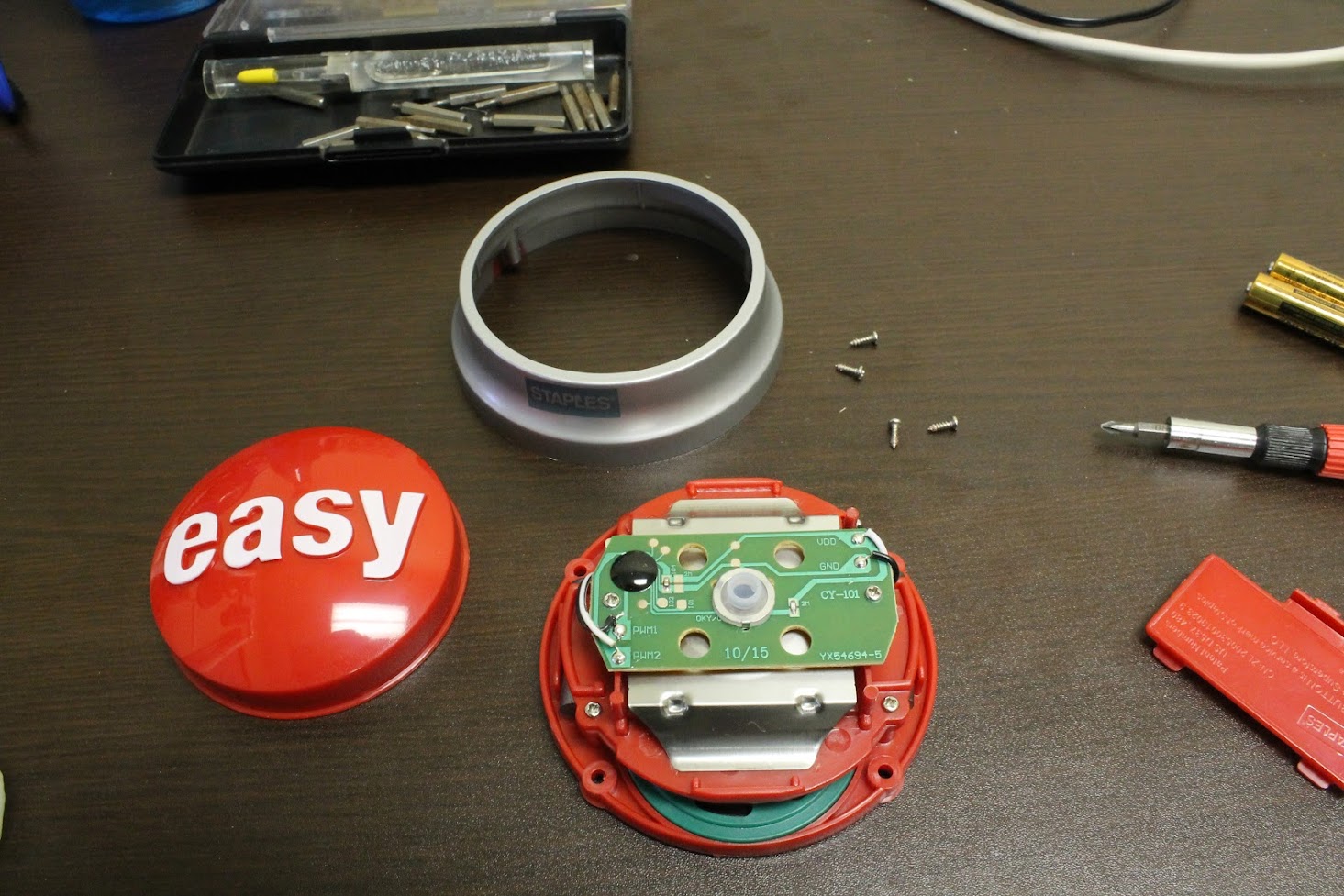 But when the silicon button is pressed, it doesn't short the circuit, instead it acts like a 500 ohm resistor: 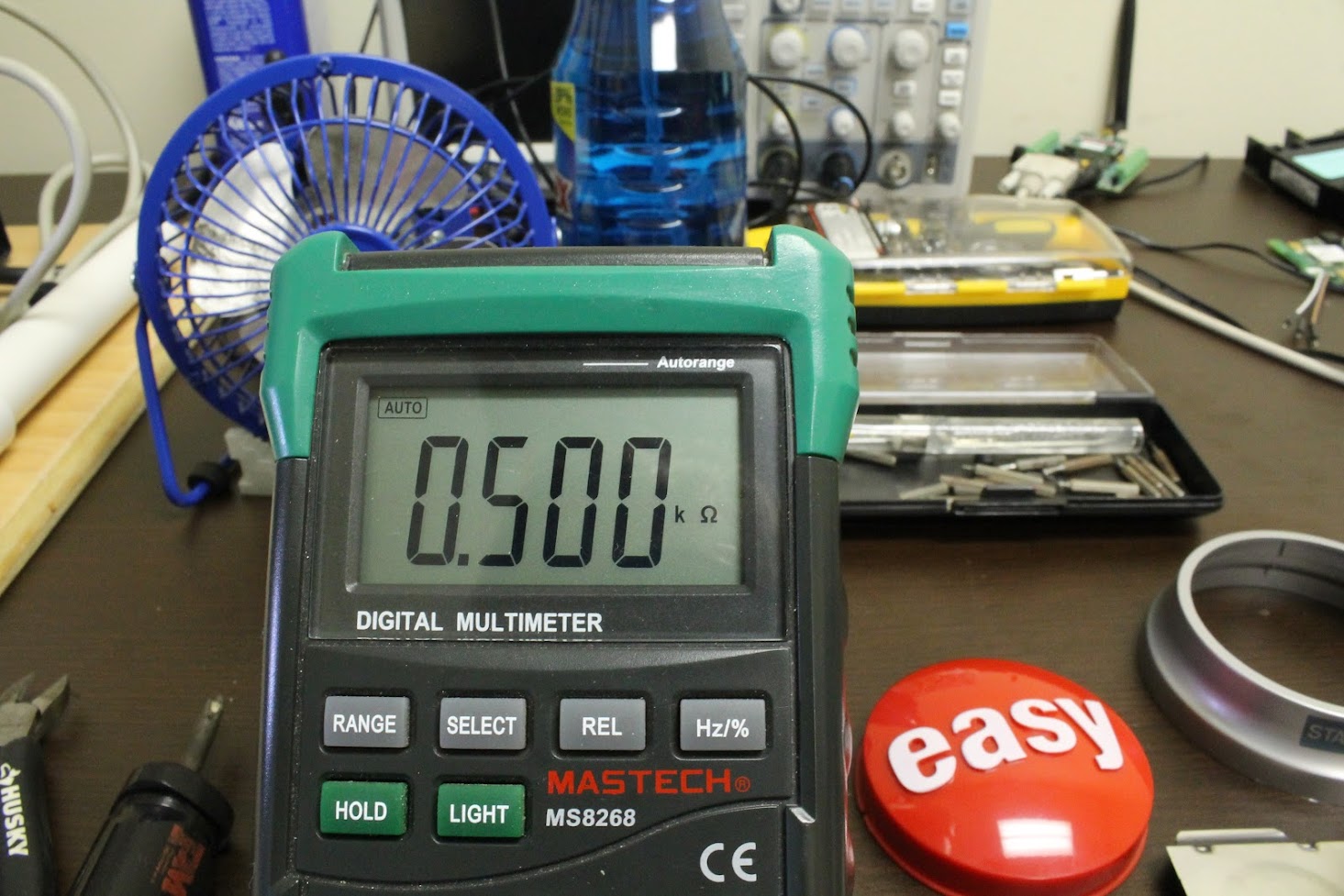 Hmmmm. Well, it's that little dot of material inside the cone that causes resistance.. Maybe we can modify it to be a conductor. 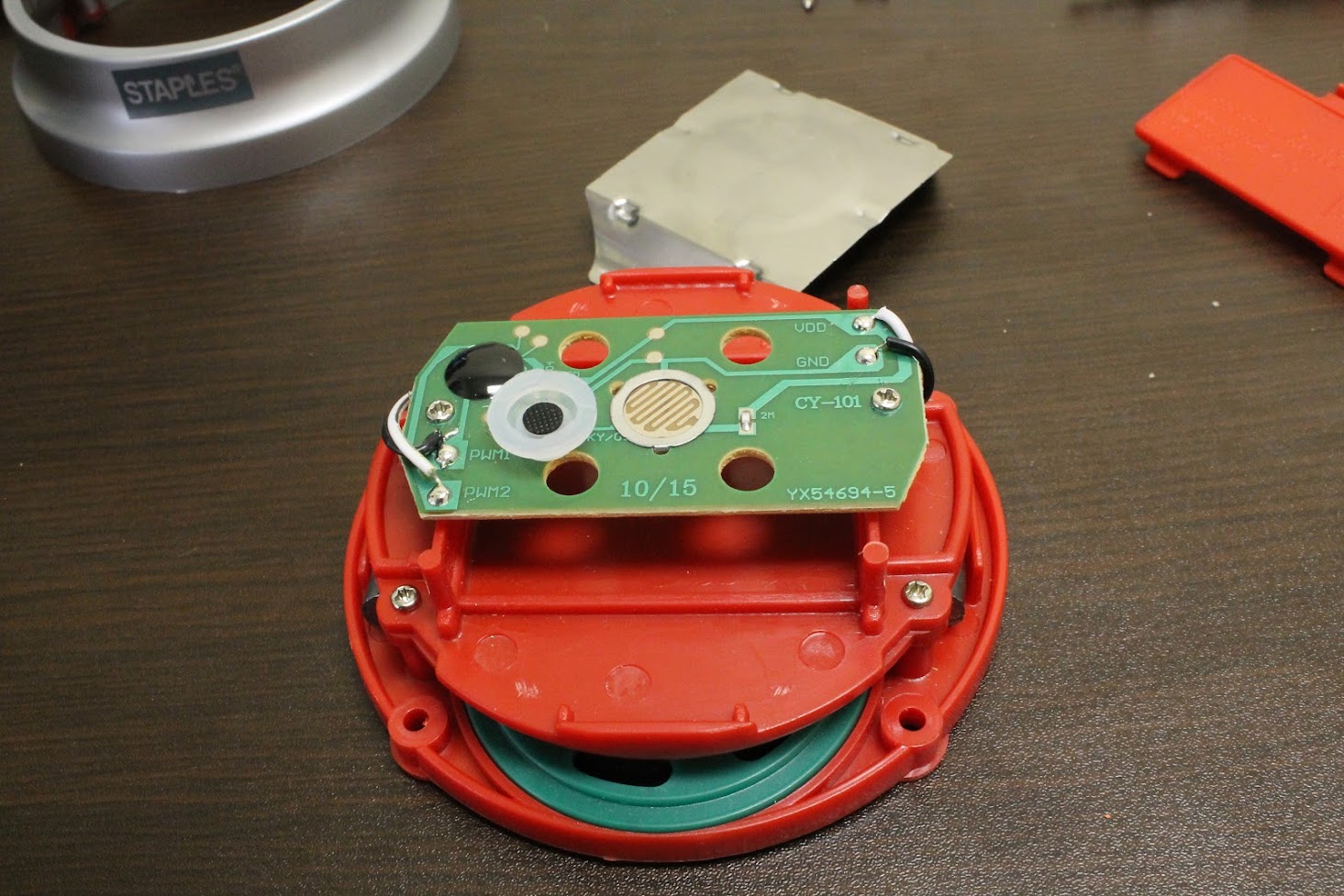 Cut out a tiny piece of tin foil: 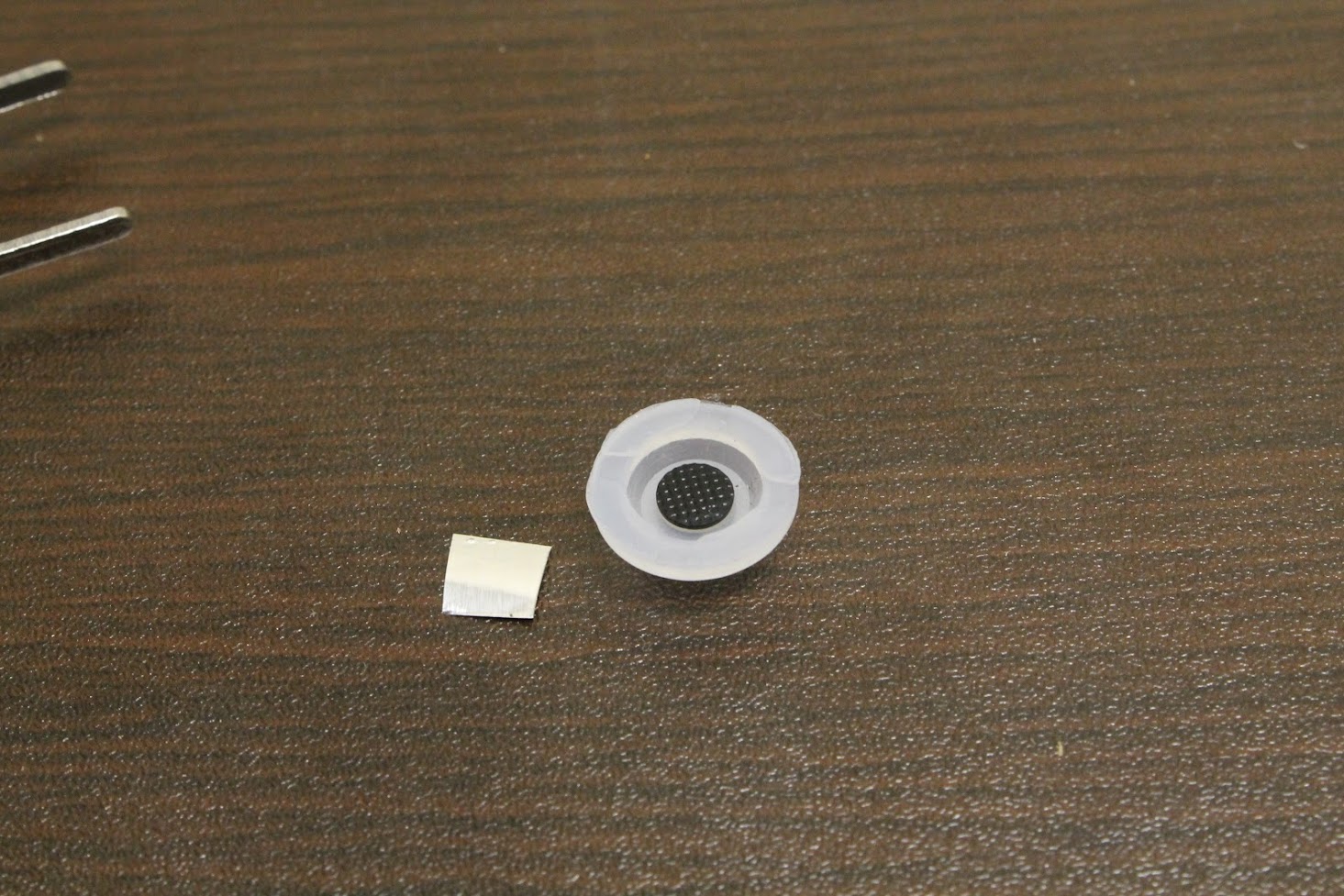 And glue it over that center bit of the cone: 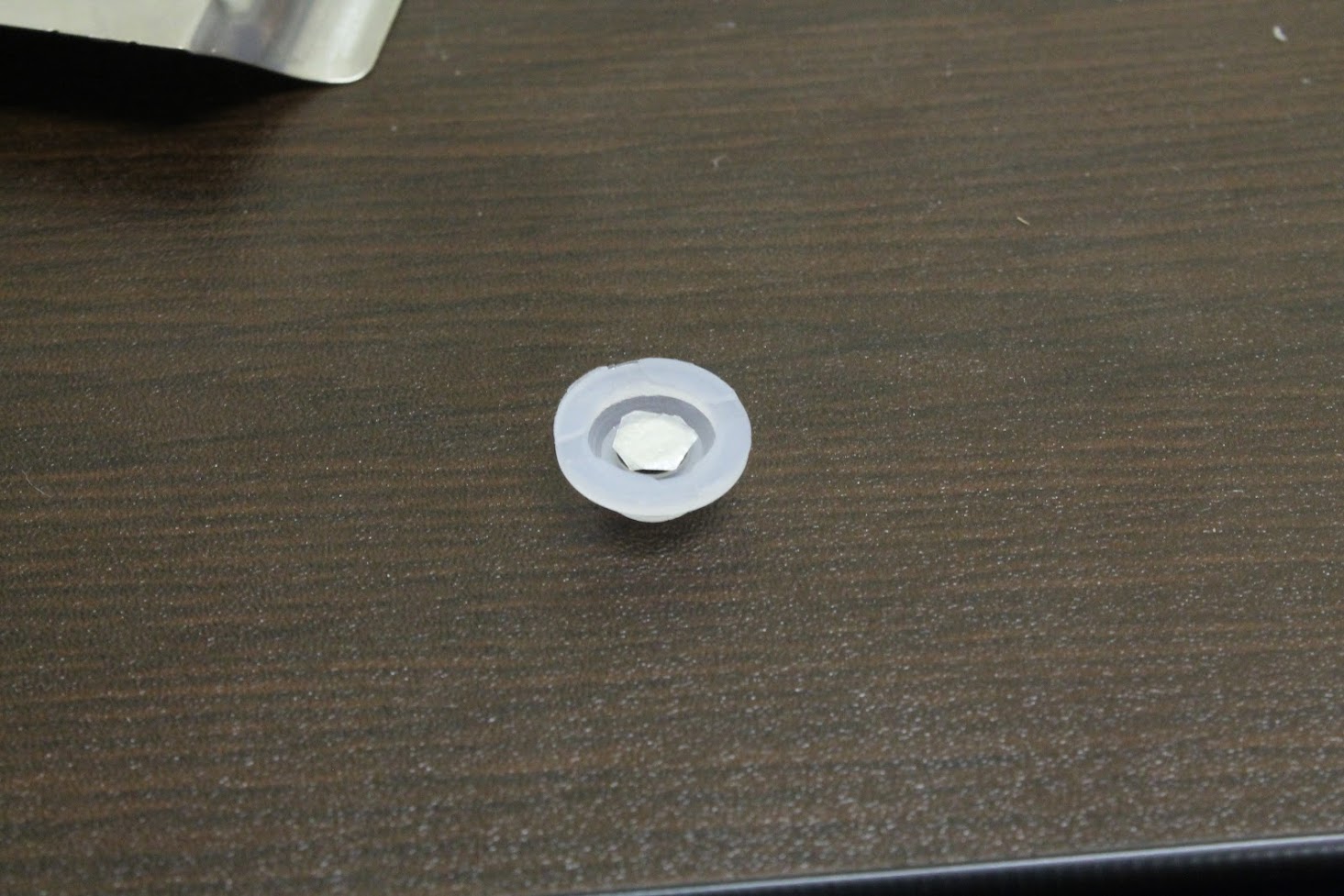 While the glue is drying, get a mono cable: 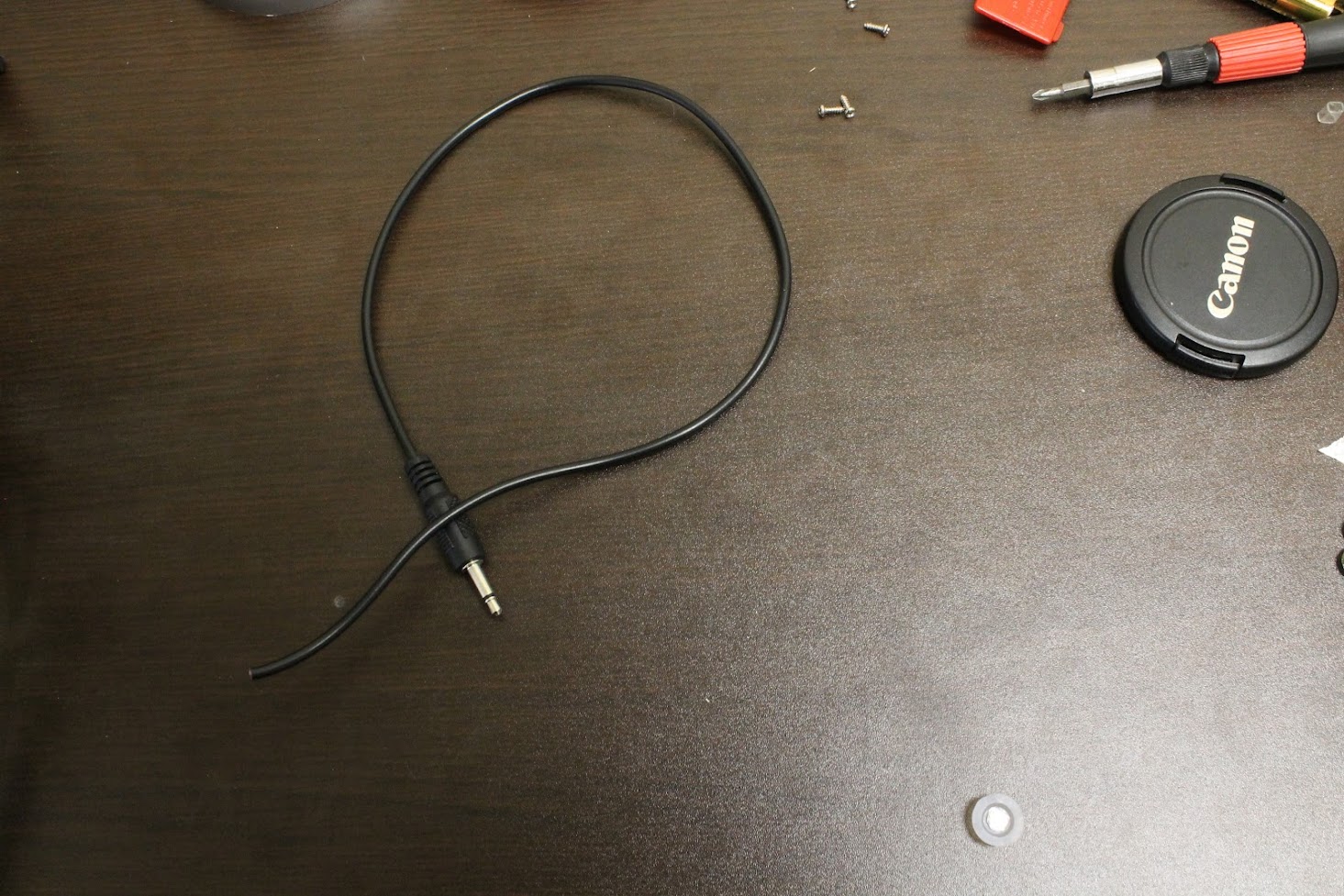 Drill a hole in the button shell, and feed the cable through: 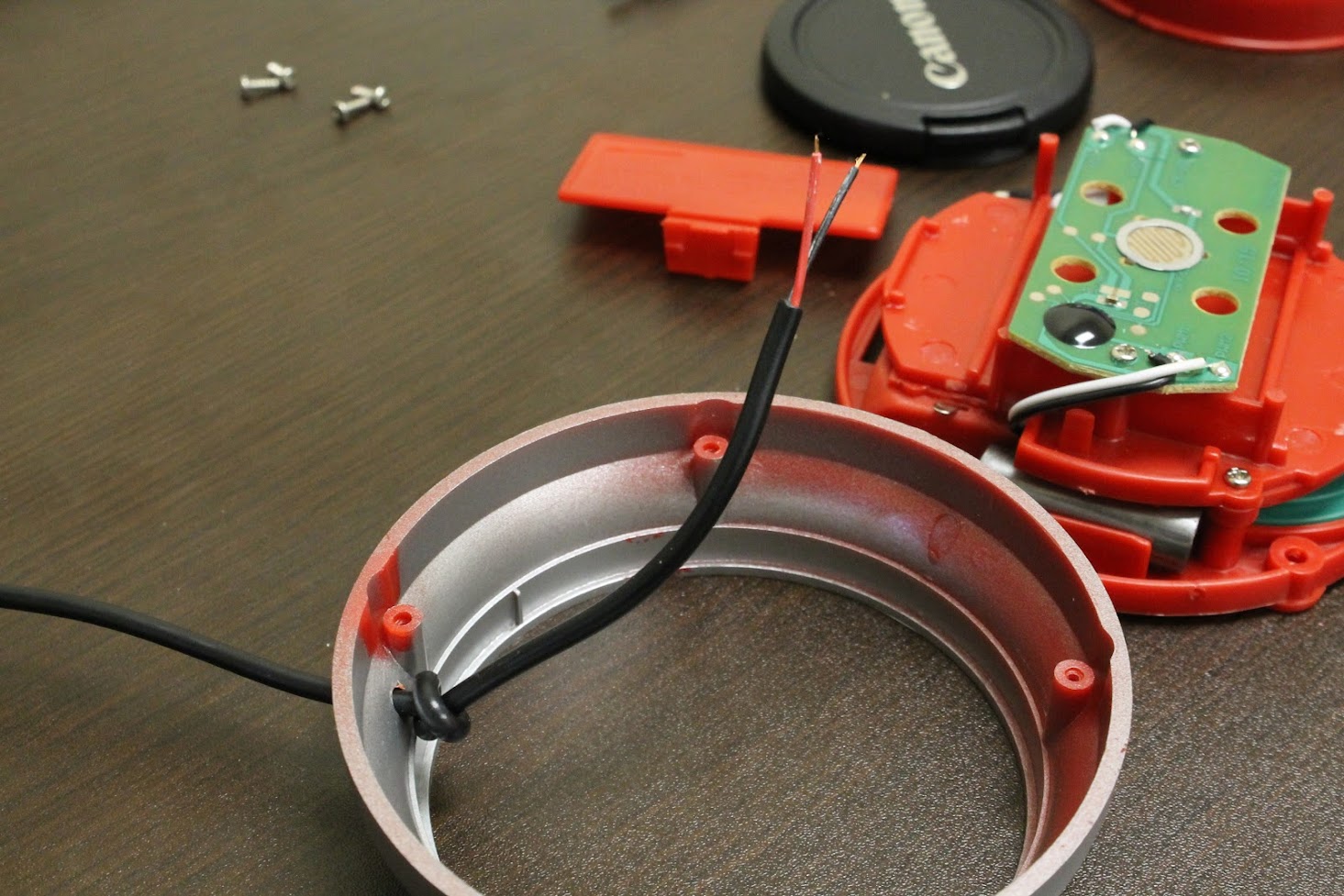 Solder the cable into the leads coming out of the switch component: 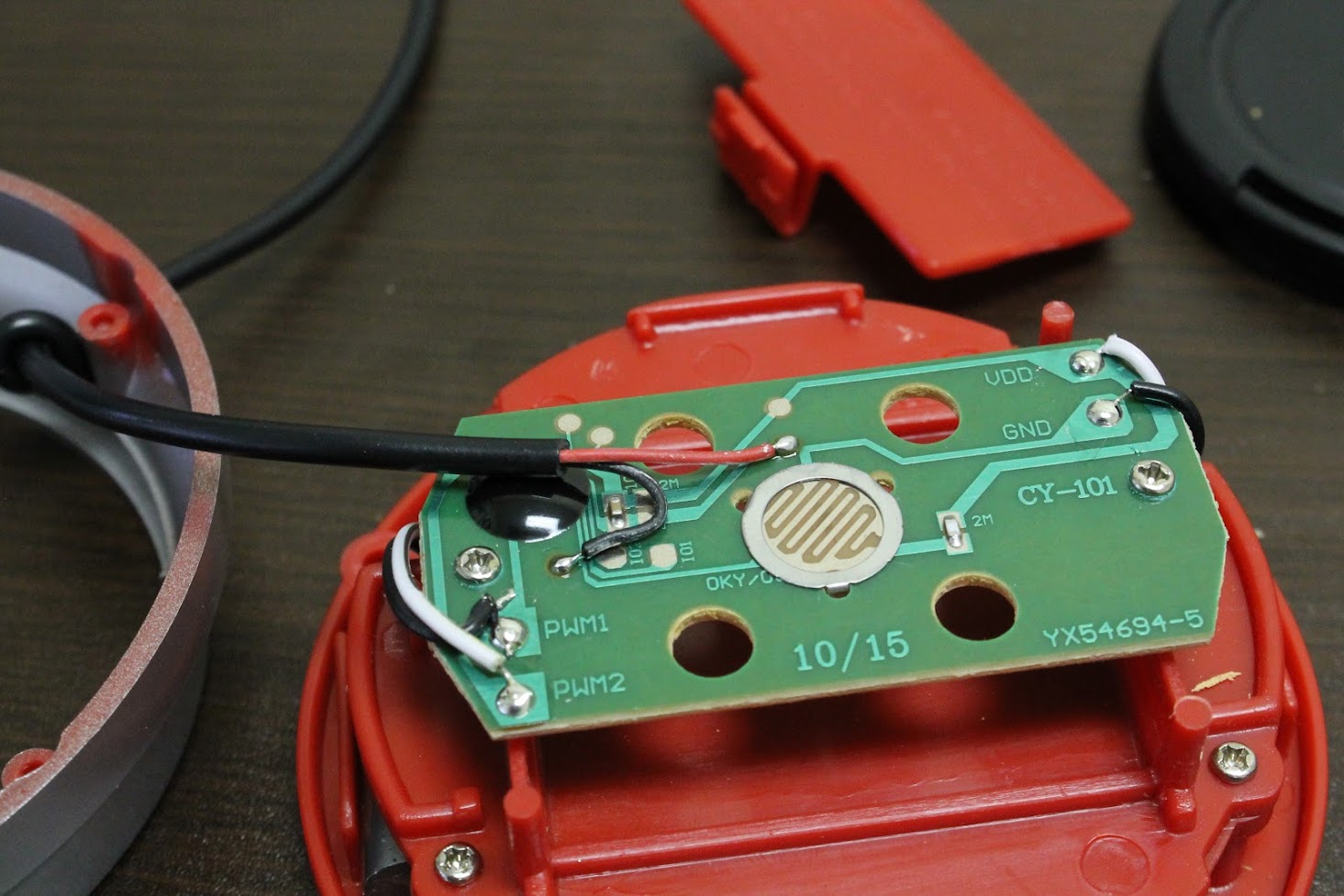 Slide the silicon cap back into its retainer: 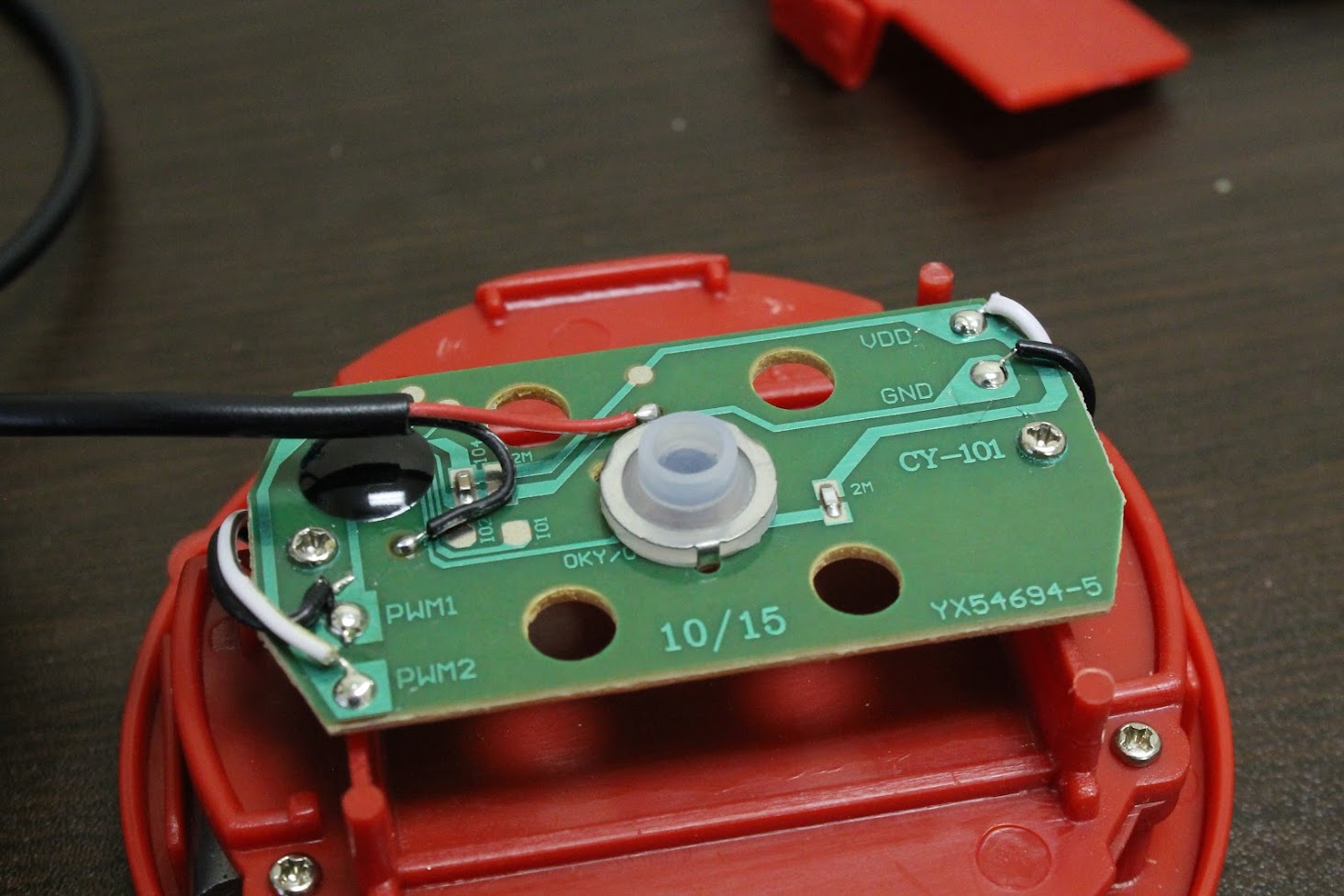 Glue and tape the cable to keep it as much out of the way of the cap as possible:

And there you have it, an Easy AT Button!

Now, I'm not about to go buy Staples out of their dwindling stock of Easy Buttons to convert them. I'm not sure how durable or suitable this switch is as an assistive button. It does work though, and nicely meets situations where an AT switch is needed immediately from local sources (the mono cable can be replaced with a regular audio cable, also from Staples).

Edison didn't make 1000 attempts, he hired numerous people to make numerous attempts, each... he didn't have persistance... he had money. Whether that's relevant is for you to decide ;)

Easy Buttons may eventually run out, but buttons in general will still exist in one form or another... e.g. those LED lights for closets, etc.

So it's a question of goals... if various cheap sources for big-ol premade buttons is suitable, then maybe work on ways to generalize the interface... 500ohms is... not uncommon for those rubbery buttons used in things like TV remotes and apparently the Easy Button... and roughly zero ohms is pretty common for a regular ol pushbutton. But, for instance, the input to an NPN BJT transistor's base can be activated with, say, 500-1k ohms tied to positive... so, a general-purpose solution for many buttons might be to put 500ohms in series with the switch, and use the switch to drive the base of an npn transistor...

Going with stereo cables and plugs makes sense, since they're so much cheaper these days than mono stuff. The 3D printed case and cherry caps do have their value in my opinion, since you're never dependent on the stock of staples's Easy Buttons. It probably all comes down to what you want to use it for and where you see the value of your product.

3D printing cases can make sense, we currently have two 3D printers printing our designs "at work", one printer has survived 1800 hours of printing so far. Let's say we've spend 2500 Euros in printer plus spare parts, that's 1,38 Euros per hour. With a cheaper printer and more printing time it can be very reasonable.

Right on about the audio cables, thanks!

I do hope 3D printing has a place making AT buttons, but sometimes when you have a printer every problem looks like a part to print. That's something I want to be wary of to some degree.

It's encouraging to hear that your company has done so well amortizing the cost of having a printer though. But even if printed buttons are more expensive than alternatives, I hope that just having a good design available will help connect hobbyists with their local disability support groups.