Portable Wireless Spectrometer that lets you explore the world around you.

The aim of this project is to make spectroscopy a tool accessible to everyone, and not be limited to research and industrial applications. Spectroscopy is a powerful tool extensively used for diagnosing physical properties, assessing food quality, environmental sensing and various other applications.

We have built a portable, wireless spectrometer that talks to its companion Android application via Bluetooth to store and visualise the spectrum. We have used it for non-destructive testing of fruit ripeness (more on this below). Now we want everyone to build this device and start exploring the world around them. We are open sourcing all the build instructions, codes and design files required to build the device so that anyone and everyone can build one!

A spectrometer is an instrument used for studying the interaction between matter and electromagnetic radiation. Spectrometers operate over both optical and non-optical wavelengths like gamma rays and X-rays. In general, any particular spectrometer will operate over a small portion of electromagnetic spectrum because of the different techniques used to measure different portions of the spectrum. Mostly these instruments measure wavelengths and their respective intensities, which upon detailed study reveal various information of the material under study. The intensity measured from these instruments can either be in absolute units or in relative units. Instruments measuring intensities in absolute units are usually called Spectrophotometers.

A spectrometer is a very powerful tool. By analysing intensity/wavelength pairs of the interacted EM radiation with the material under study, detailed information like its chemical composition, crystal structure and other elemental information can be extracted. It can also be used for food analysis. For example, it can reveal adulteration in milk or oil and analyse toxins to understand causes of food poisoning to name a few uses. We have used it to non-destructively measure fruit ripeness. Also, did we mention, the Curiosity Mars Rover also houses a suite of Spectrometers for analysing various rock and soil samples(more information can be found here). Spectrometers are awesome!!

In our build we have used the C12666MA mini-spectrometer from Hamamatsu. As discussed earlier, every spectrometer is sensitive over a small portion of the electromagnetic spectrum, so is this. Its spectral response is from 340 to 780 nm, detailed specifications can be found here. Check out our paper in Scientific Reports here. 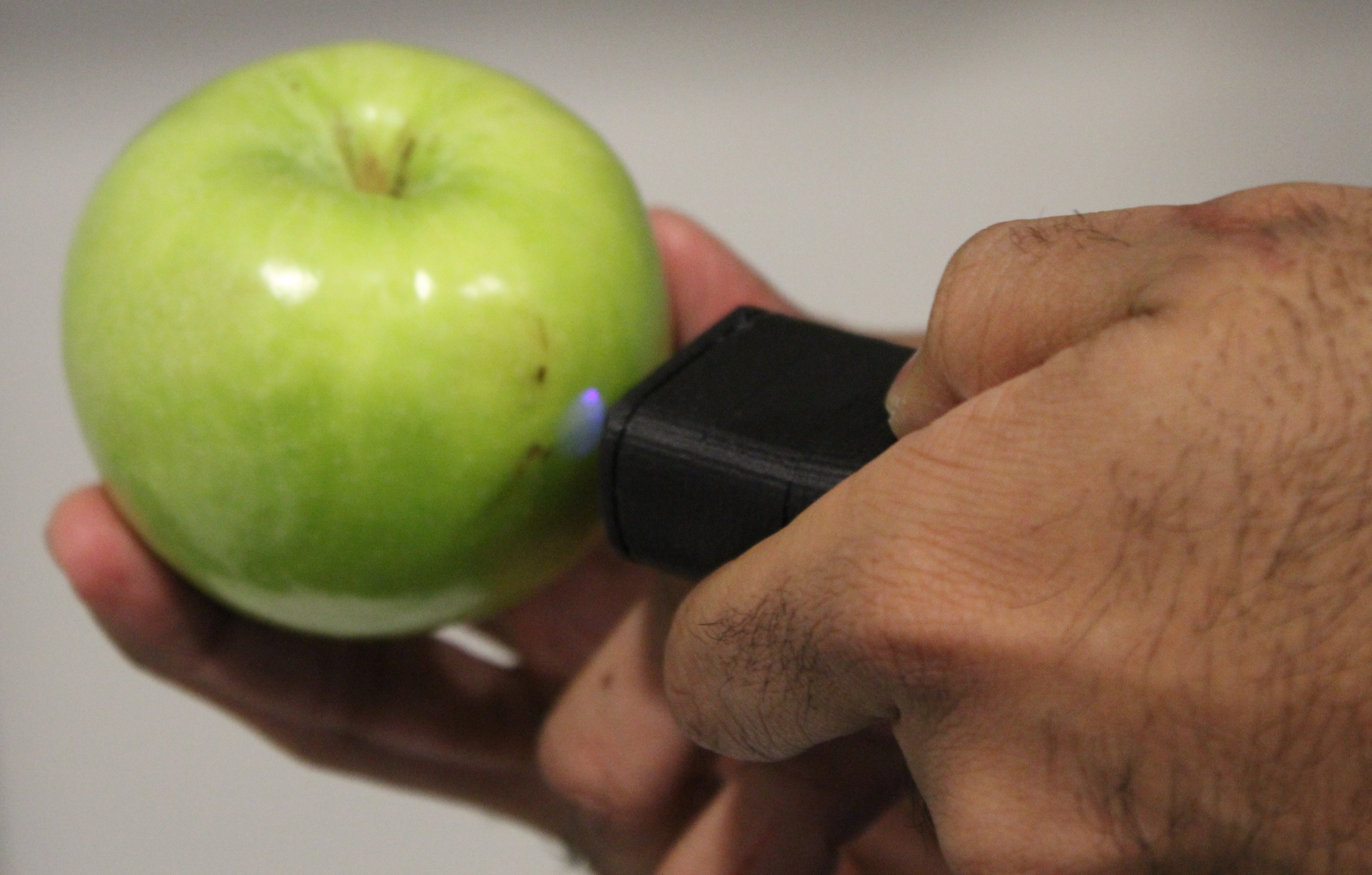 Hi great project.  However the source code links don't work.  Could someone please upload a copy of the source or a link to a working repository please?  Thanks Michael

Great work Team WiSci!   However the Github repository link is not working, and the 3D printer files are missing.  Can you please post or send me a link to those?  Thanks Michael

Hi, I want to make spectrometer to measure percentage of micronutrients in the soil using this method . Can u please guide me

Hello, it is a very interesting project to build a spectrometer at low cost. But step 3, the link to download code to burn in arduino does not work: "https://github.com/AkshatWahi/WiSci_Arduino_code".

Can you pass an updated link to download the code for arduino ?.
I would like to make a spectrometer to analyze water quality.

I’m totally new to the spectrometer world.   My goal is to measure skin color, separating melanin and blood components.    This can check for tissue swelling etc.      But I’m wondering if the  WiSci spectrometer would do this for me.      I’ve linked the article:   https://onlinelibrary.wiley.com/doi/full/10.1002/jbio.201400103

And this is a summary:

Quick analysis method. The melanin slope between λ1 = 700 nm and λ2 = 800 nm is determined, yielding a melanin score (MS [OD/nm]). Extrapolation to 585 nm yields a baseline value and the difference between the measured OD585 nm and this baseline value yields a blood score (BS [OD]).

We have a market for the use of spectrometers to measure and record BRIX readings (such as the SCiO), but our market(s) are not IT teco's. Nor am I, so if anyone can supply a finished working product, I am keen to buy!

I can not find the code for Arduino, how could it be obtained? I'm developing an equal one.
thank you very much

Hi there - where can I find case 3d print blueprints?

Hi, can we build this same project with any Hamamatsu mini spectrometer, say C10083CA or C10082CA?

We are afraid that is not possible. Those units come fully assembled.

Hi, can we build this same project with any Hamamatsu mini spectrometer, say C10083CA or C10082CA?

Congratulations to your entire team. Do you have estimations on how many people contacted you, apart from this discussion board, about possible meaningful applications? According to your citations, grapes and apples are the only fruits with measurable quantities in UV/VIS range via antho/fyto cyanins. Have you read some articles with other important fluorescence markers in plants? Thx.

If i wan try some other fruits, what will i do ?

will you be updating your code for the new C12880MA?

Is there any way how to estimate light source (LED) power? What LED did you use? I'm thinking about using the C11351 with wider spectrum range (up to IR) and I don't know what LED I should use.

Also what is the purpose of the filter in front of spectrometer?

When is it possible to buy it?

We have made everything open source and you can build it from scratch. Currently, we dont have any plans to sell it. If we do, we will get in touch.

I am interested in this application. but I want to do it with python. is it possible?

How did you extract values from hardware? and how did you filter that data?

If only I remebered more about Electronics I would do one for my self! I am will ing to try this product in an intensive and industrial enviroment. Please contact me if you what to try it with  Grape tomatoes And Cherry tomatoes in a real chalenging enviroment.

The goal would be to determine BRIX content in the fruit in a non destructive way.

Hi CCasillas, That sounds like an interesting application. We are in the process of improving the prototype and the app. We will get in touch once it is ready for more testing.

Wow, it's quite handy and cute!

Easy to build PSoC based Potentiostat

The 2017 Hackaday Prize
A combination of modern sensor and cheap computing power helps preventing diseases by detecting them at their early stages.
Project Owner Contributor

The 2016 Hackaday Prize
Our project is a spectacle mountable device which helps under neck disabled people to control mobile and computers.
Project Owner Contributor