Blind or partially sighted people can face challenges in performing standard daily activities that sighted people take for granted. One fundamental challenge is to build up an awareness of the surrounding environment, in terms of a mental image.

In the absence of normal eyesight, the human brain can learn to use the visual cortex to interpret unusual sensory stimulation as "sight". I intend to address the challenge by creating a low cost device that provides visual information by stimulating the tongue, which is particularly sensitive, using an array of electrodes to create a low-resolution image.

This "vision" device will help the user build up a mental picture of the surroundings, as well as provide cues to aid orientation and spacial awareness.

This is a concept that I first read about a few years ago. At the time I made some plans to build one using a couple of AVR microcontrollers, a VGA CMOS camera and a dual-port RAM, but I never followed it up. It's easier now to use a Raspberry Pi to capture and convert video data, simplifying the custom circuitry needed.

There is a commercial "tongue vision" device available, but it costs $10,000. I aim to create something similar using low-cost hardware, with all design information freely available, so that anybody can make one. The total hardware cost will be less than $100.

The following paper describes how the brain can adapt to use the tongue for vision in this way:

Brain plasticity: ‘visual’ acuity of blind persons via the tongue

This is the commercial device I am aware of (though I haven't actually seen one):


I don't know know any details about how the commercial unit works, as the only information I have is from the website above. So it could be that my design ends up to be quite different in terms of the actual signals that are generated.

The project will consist of the following elements:

I intend to base the interface lollipop around the Atmel ATMega328P microcontroller, and the camera/control unit around the Raspberry Pi Zero.

The first block diagram shows the concept as described:

Inside the camera/control unit, the Raspberry Pi will run software to process video data from the camera, convert it into a suitable low resolution format and send it to the interface lollipop. A power supply circuit will be needed to power the Pi from a rechargeable battery and also power the lollipop. The lollipop itself will contain the microcontroller-based interface circuit to drive the array of contact points.

The second block diagram shows a possible alternative design where the image data is captured via a smartphone and sent to the interface lollipop via bluetooth. This would allow the cost of the control unit to be minimised, as it would only need to provide power and adjustment controls for the interface lollipop. 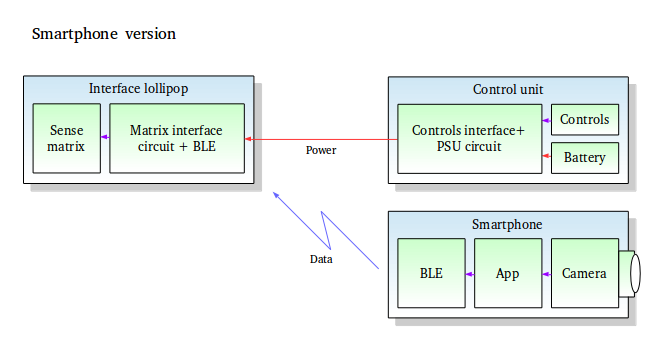 For this project I will focus on the standalone concept, but will include the option for bluetooth in the interface lollipop in order to add compatibility with the smartphone concept. Eventually, it should be possible for the interface lollipop to be completely wireless, but this will involve putting a battery inside it and I don't intend to do this yet.

Hii this is Janavi here I was keen of making a similar project like you ..but i have no idea about how to make the lollipop PCB if possible can you help us with the design and it's making if possible .

Really interested in this project.  How is it going?

I'm hoping to make a similar device except with an accelerometer for balance.  I think my lollipop will only need 6 or so contacts.  I was really hoping to find one commercially available. No luck so far.

hello, I am an MA student at the University of the Arts London.  Really interested in your project, could you give me your email address. I have something wanna talk through email. Thank you. Ceci

Hi, i really liked the project. Its been a while since your last log. Did you do any progress?

This will probably start tasting really bad after a while due to electrolisys.

What this needs to do is apply AC (square wave) to each ring pair using 2×16 tri-state buffers.

Hi Mark, interesting, I'm curious to find out how it feels, and tastes. Once the prototype is working I'll experiment a bit with different drive methods to see what can be improved, and I'll definitely bear this in mind. Thanks!

Hi, thanks a lot for the comment! I'm hoping that the concept will allow for more than simply brightness perception. For now the main objective is to get a working system that presents image data from the camera, but then it could easily be extended to "display" different kinds of information. For example, perhaps the depth of a point on an image could be represented by its intensity, and this should definitely be possible. Let's see!

Hi, I think the concept is really great and powerful. However, if you want it to be a real useful tool for blind people to use everyday for tasks like navigation and spatial awareness, I think brightness perception is waaaaay too "abstract" and a really poor use of the concept. Maybe it would be cool to sense something flat like a picture or a drawing through it, but most of it would be for aesthetic purposes. Depth perception, on the other hand, would be incredibly much more useful.
There's this project that you could maybe look into, but it seems that that the source code will never be published. http://hackaday.com/2014/11/03/stereo-vision-and-depth-mapping-with-two-raspi-camera-modules/
Personally, I would try something with a kinect. I read somewhere that it could achieve around 10 fps with a raspberry pi 3, which would be great if you could extract depth information and route it to the depth matrix in realtime.

Anyway, good luck with this project, I'm really looking forward to see how you will build that tongue sense matrix :p

More sensitive to gamma radiation than a Geiger counter with the added bonus of telling exactly what's inside your samples!
Project Owner Contributor

The 2015 Hackaday Prize
Rasky is an expansion board for raspberry pi model 2, a collection of software and some 3d models to build an open source KVM over IP
Project Owner Contributor