So far the biggest part of the project has been the layout of the interface PCB, and I began working on this a couple of weeks before starting to enter the project details and logs. The layout is now complete! Even as a beginner I found Eagle to be quite straightforward to use and produce a nice layout. The resulting board is about 80x30mm in size, which I think is fine for the prototype. I managed to pack the components reasonably tightly, but I only populated one side of the board, so there might be room for a bit of future size optimisation (although there's plenty of routing on the reverse side).

I've reserved space to stack the Adafruit BLE module on top of the board without increasing the footprint. I've tried to keep the layout neat and tidy, and added some labelling on the silkscreen layer to identify the pinouts. I also added a small drawing of a platypus - a mammal that can sense electric fields!

Here's the final (prototype!) board layout:

To make the gerber files I referred to the sparkfun tutorial I referenced before, using their suggested CAM file:

I wanted to check the gerber files in a tool other than Eagle, as a sanity check. I found gerbv, an open-source gerber viewer that works really well:

I used this to check particularly that the solder mask around the vias was dimensioned correctly to produce the annular rings. 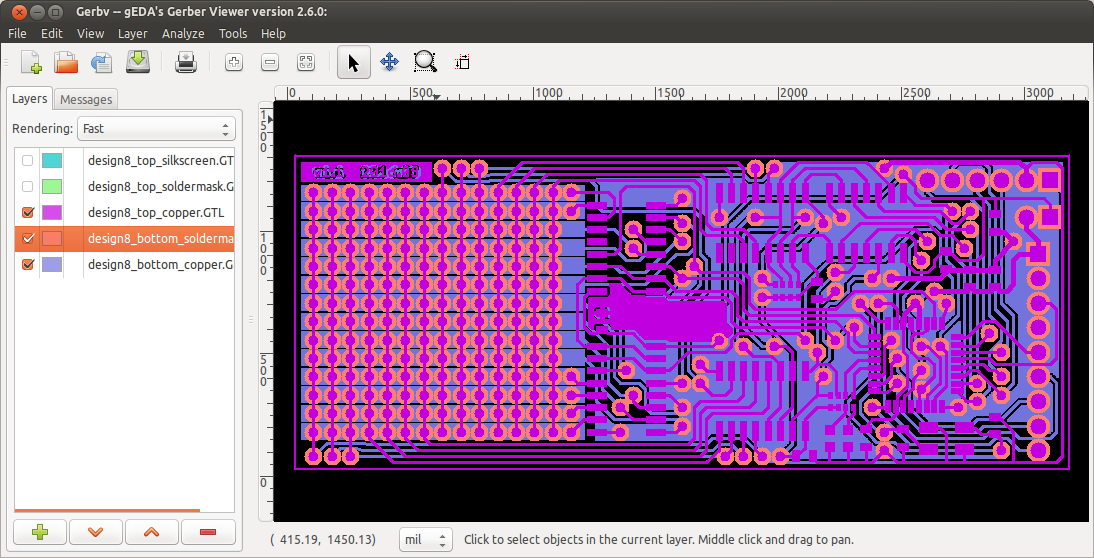 I plan to make all the design and manufacturing files freely available, but first I want to make sure that it actually works. I've placed an order for 5 boards from pcbway in China. I don't have any experience of this supplier (or any supplier, in fact), but the European manufacturers seem to be quite expensive if you want a short lead time, and to get boards reasonably quickly it's cheaper to get them from China, with airmail shipping.

I chose lead-free HASL surface finish, which is cheap. ENIG (gold) would be more appropriate for the sense matrix, but I wanted to keep the cost down for these first boards, as I don't know yet whether there are any mistakes in the design that would make the board unusable. So there's no gold finish for now.

I ordered all the SMD parts from RS components in the UK, and found you can even buy 0805 capacitors in quantities of 5! I did check that I could easily get all the required parts in the intended packages before I started the PCB layout, to avoid designing for something that was unobtainable.

With the sense lollipop components and boards on the way, it's time to think about the supporting software on the Raspberry Pi.