This LTE shield uses SIMCom's SIM7500 LTE CAT-1 module to add traditional LTE connectivity to Arduino projects! It's super easy to use and powerful, effectively turning your Arduino into a phone with voice, SMS, LTE data, and more!

Ever wanted to turn your Arduino into a phone with LTE technology? Sure, there are lots of 2G and 3G modules out there, but of the few that exist, not many LTE modules for Arduino are well-documented or are insanely expensive! With the SIM7500 shield that's about to change! This shield not only has standard LTE technology with world-wide coverage but it also supports 3G, GPS positioning for asset tracking, and I've also thrown in an I2C temperature sensor in there as well, convenient for at least sending some data to the cloud. You're also not stuck with using 5V Arduino; the shield allows you to configure your own logic voltage so you can interface this with Raspberry Pi and other 3.3V microcontrollers.

As a firm believer in great documentation I've set out on a journey to use just about every cellular module I can get my hands on, including the SIM7000 module, this SIM7500 project, and hopefully others as well! Join me in this adventure, share your comments, and let's get Arduino users all around the world connected to the cell towers!

So what exactly is this project about? Basically it's a "shield" that plugs into an Arduino Uno, Mega, Leonardo, etc. and gives it LTE cellular connectivity, kind of like a phone. You can send and receive text messages, utilize LTE data to send or receive sensor data, use the GPS to track location, call another device just as you would on your phone, and all sorts of other functions that I'm still documenting and unlocking. Below is a quick overview diagram showing the various features of the shield: 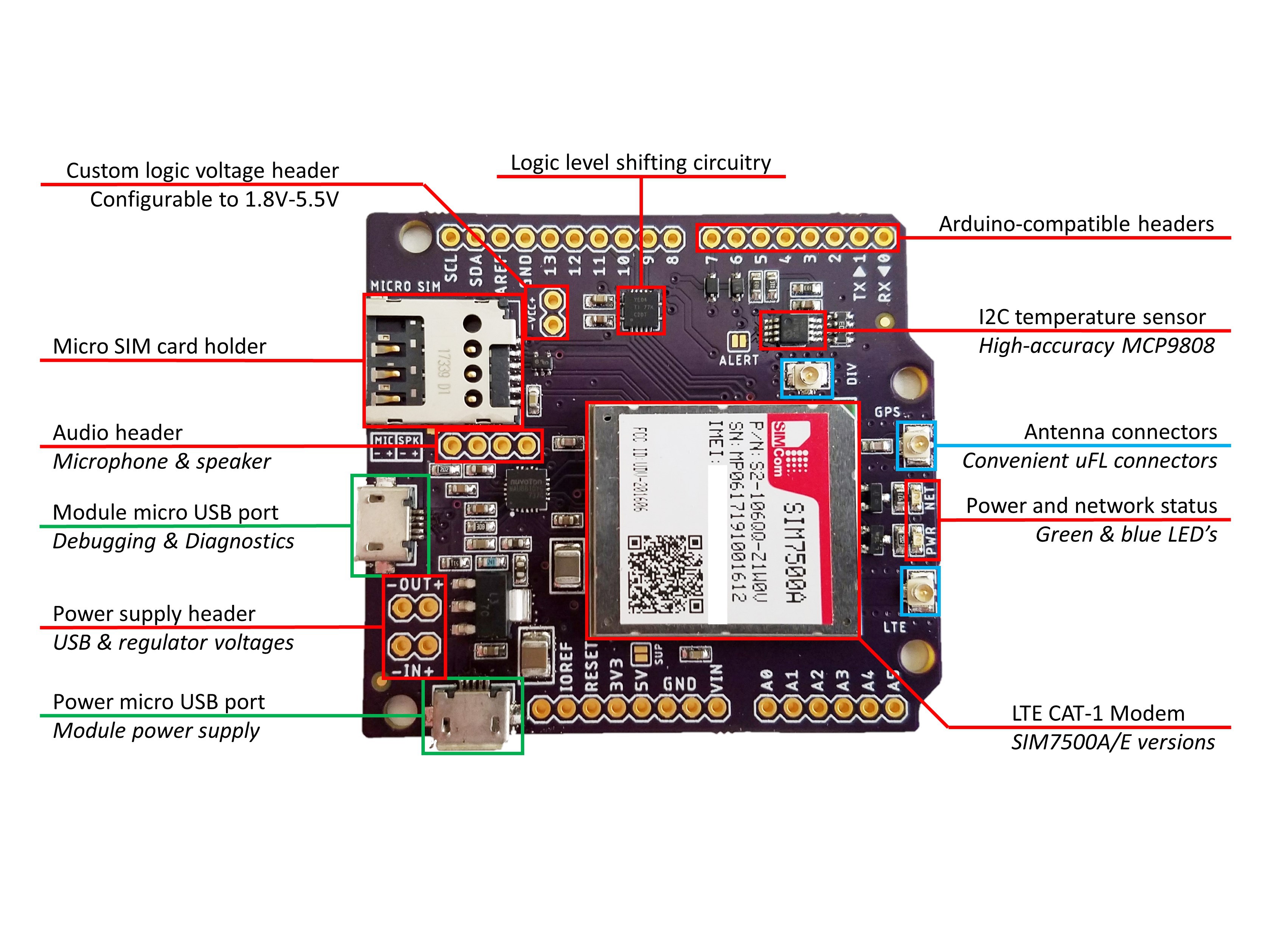 So, first things first: in order to use this module we need to decide which version is most appropriate since the SIM7500 comes in two versions, the SIM7500A and the SIM7500E (probably more versions coming soon). The main differences are the geographical regions in which they operate due to the supported LTE "bands". For more info, please see this Github wiki page on how to select the appropriate version. As you can see, both versions support 3G but the SIM7500E also supports 2.5G and 2G fallback.

Now let's explain some of the features. One cool thing about this shield is that it has both voice input (via an electret microphone) and audio put (speaker) support, unlike my other SIM7000 shield which used the low-bandwidth LTE CAT-M and NB-IoT technologies and voice isn't really feasible or top-notch even if it were done. That means you can call your friend with your Arduino... how cool is that?

Perhaps the most  important feature (and probably why you want this shield) is it's LTE data capabilities. Want to make a DIY home security device that takes a picture and sends it to a server? No problem! With this shield you can enable data, do HTTP/HTTPS requests, FTP stuff, and many other cool things that I have yet to explore with you all!

On the software side things are really easy! Just follow these instructions to install the Arduino library (which is an improved version of the Adafruit FONA library) and run the examples!

Goals for this Project

My goal for this project is to share what I've done...