The main idea of this project is to develop a exploring robot that collects data from its enviroment (temperature, soil samples, solar and infrared radiation, light intensity ). This data will be storaged in a SD card (as a .txt file) that is on board of this robot.

The energy is not a problem, because it will have (two or one) 20V or 15 V solar cell/s that will provide the energy to power two rechargable batteries. These batteries will be connected to the boards and will power the motors of the robot.

Referring to the sensors that will guide the robot, I will use some infrared emitters and receivers, also some switches to measure physical contact.

I am investigating the fact of adding a camera comming from a recyclated old camera.

I will improve some details and i will upload this project.

First of all I had to build this board.

Using a Picaxe-18M2 as a microcontroller and a ULN2803 as a driver for motors, this picaxe should be identical to the original.

First of all the ULN2803 works driving "high currents" with "low currents", it supports currents of 500mA. In the future it will control a H-bridge that powers DC motors (for example to move something automated).

Secondly, but not less important there is the "brain" of this project, the Picaxe-18M2. It is programmed by a serial port that is connected to the computer, and then you load the program by a 3,5mm jack on the board. Another projection to the future is that the board will be enhanced by installing a led that indicates it is connected to the computer.

The diagram of the connector (Serial to 3,5mm) is also included on the pictures. In the original schematic it had two resistors, but it this case I deleted this because they were included in the board.

I have finished the the board. The main idea is to connect it to another board and make them interact.

The two main boards I want to connect are these: 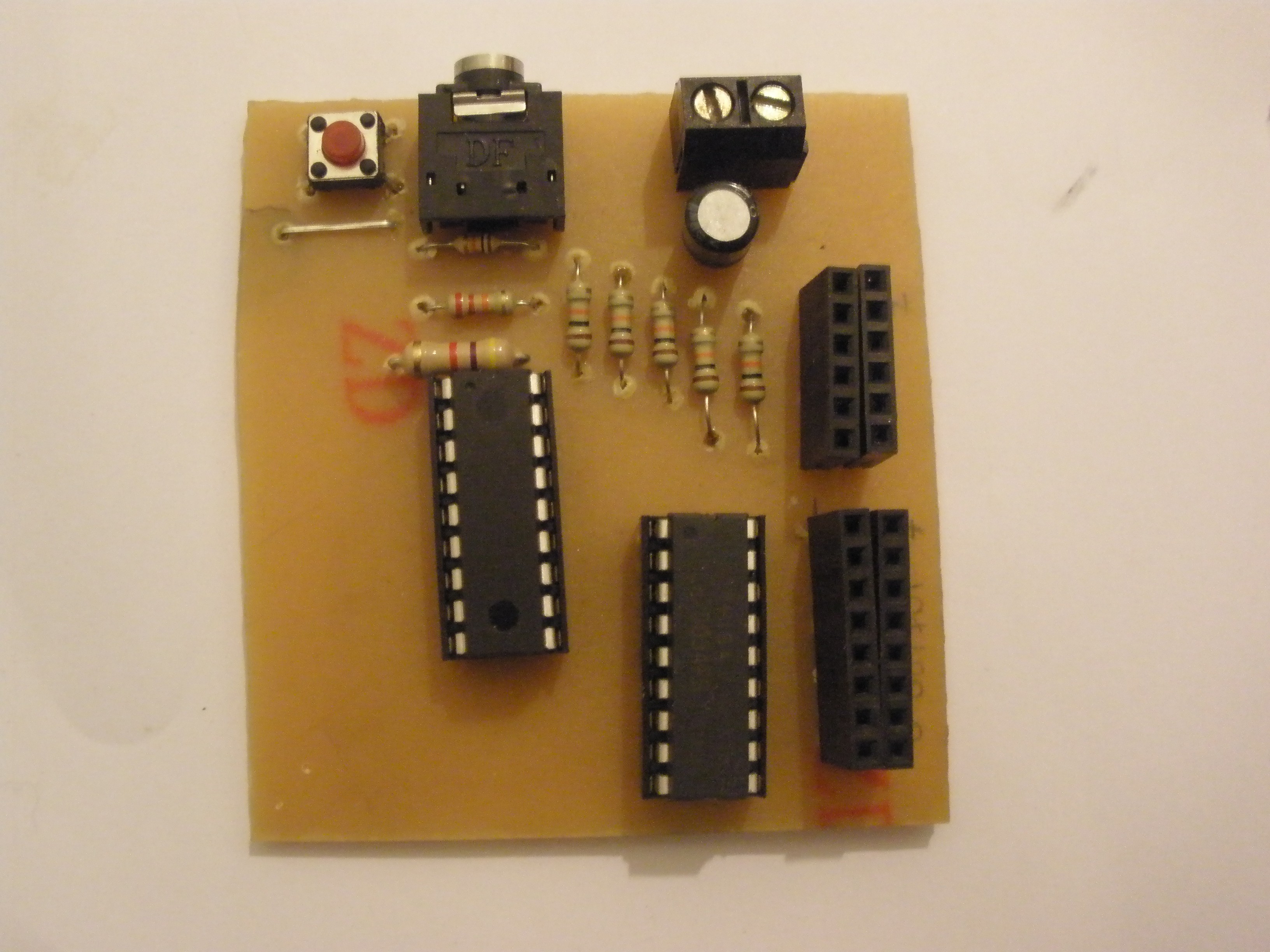 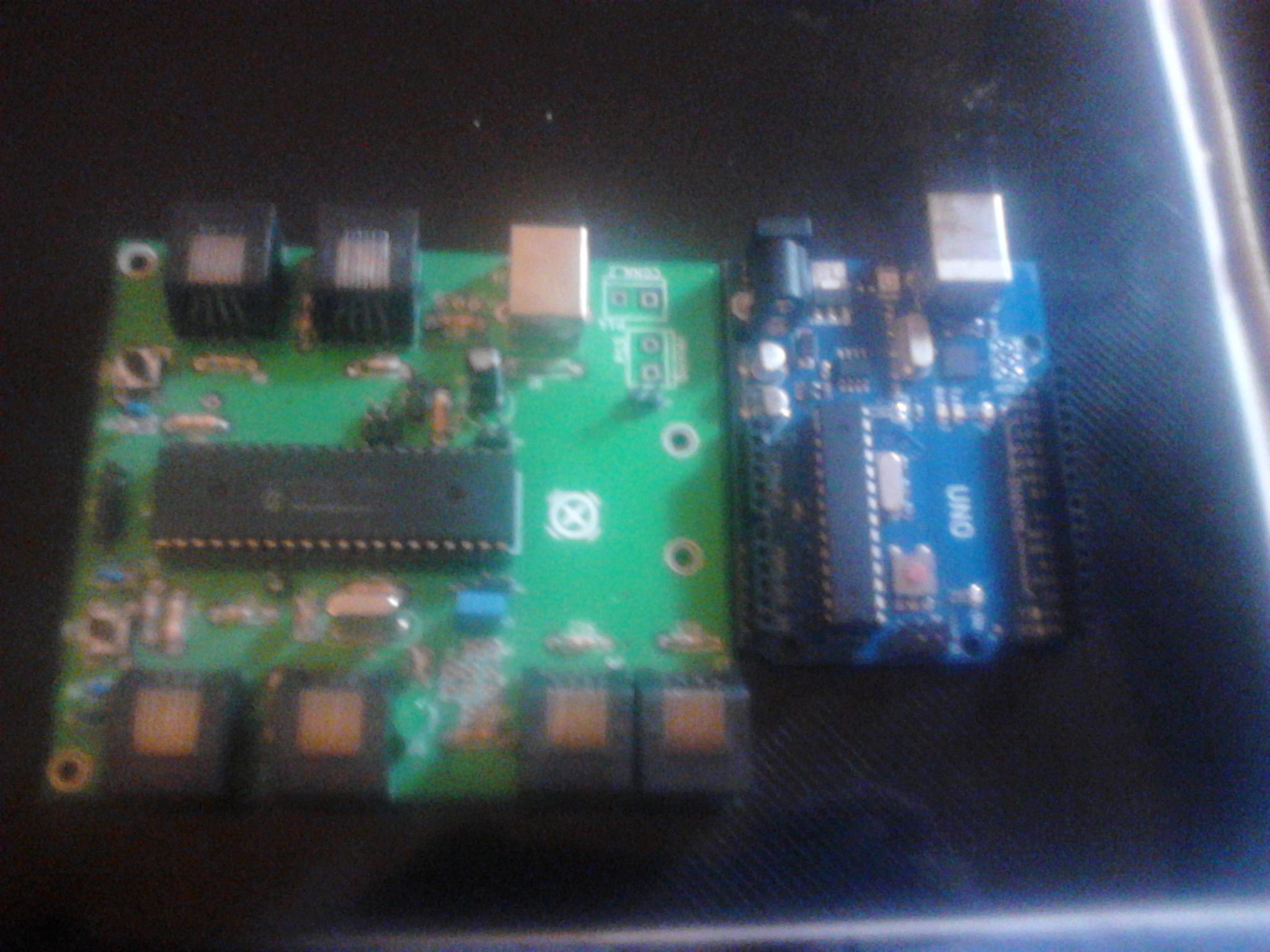 The first one is the Usb4Butia (http://www.fing.edu.uy/inco/proyectos/butia/) and the second is the well known arduino UNO.

The second problem is to power this boards and in the future the motors. So I will use a solar panel that charges a 6v battery, also I could use the two batteries shown in the second picture. 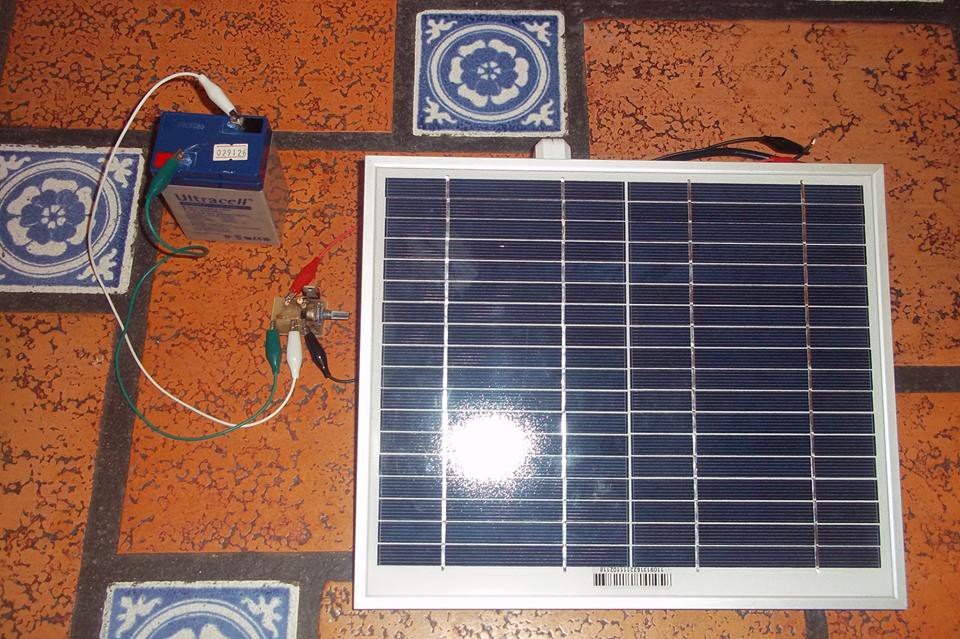 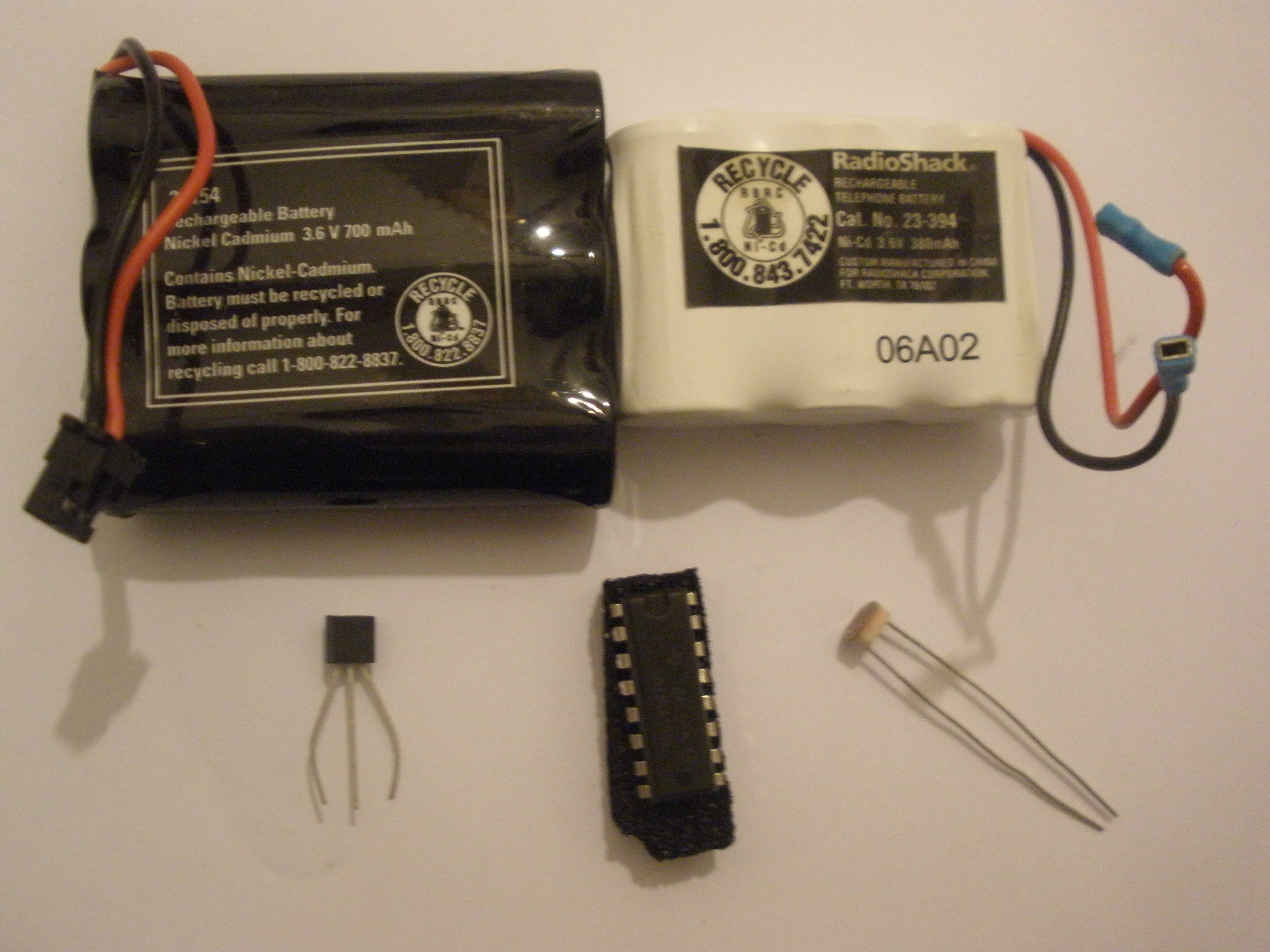 These two batteries are rechargable Nickel-Cadmium (NiCd), they last longer than the  Nickel metal hydride (NiMH) and they provide the energy necesary to run the Arduino board. But the disadvantage is they have memory effect, that affects its performance.

The exploring robot will consist in two logical modules:

There I will use an arrange of sensors that will measure:

These will be connected to the Arduino UNO, and all the data will be processed by it and downloaded to a micro-SD card (shown below). 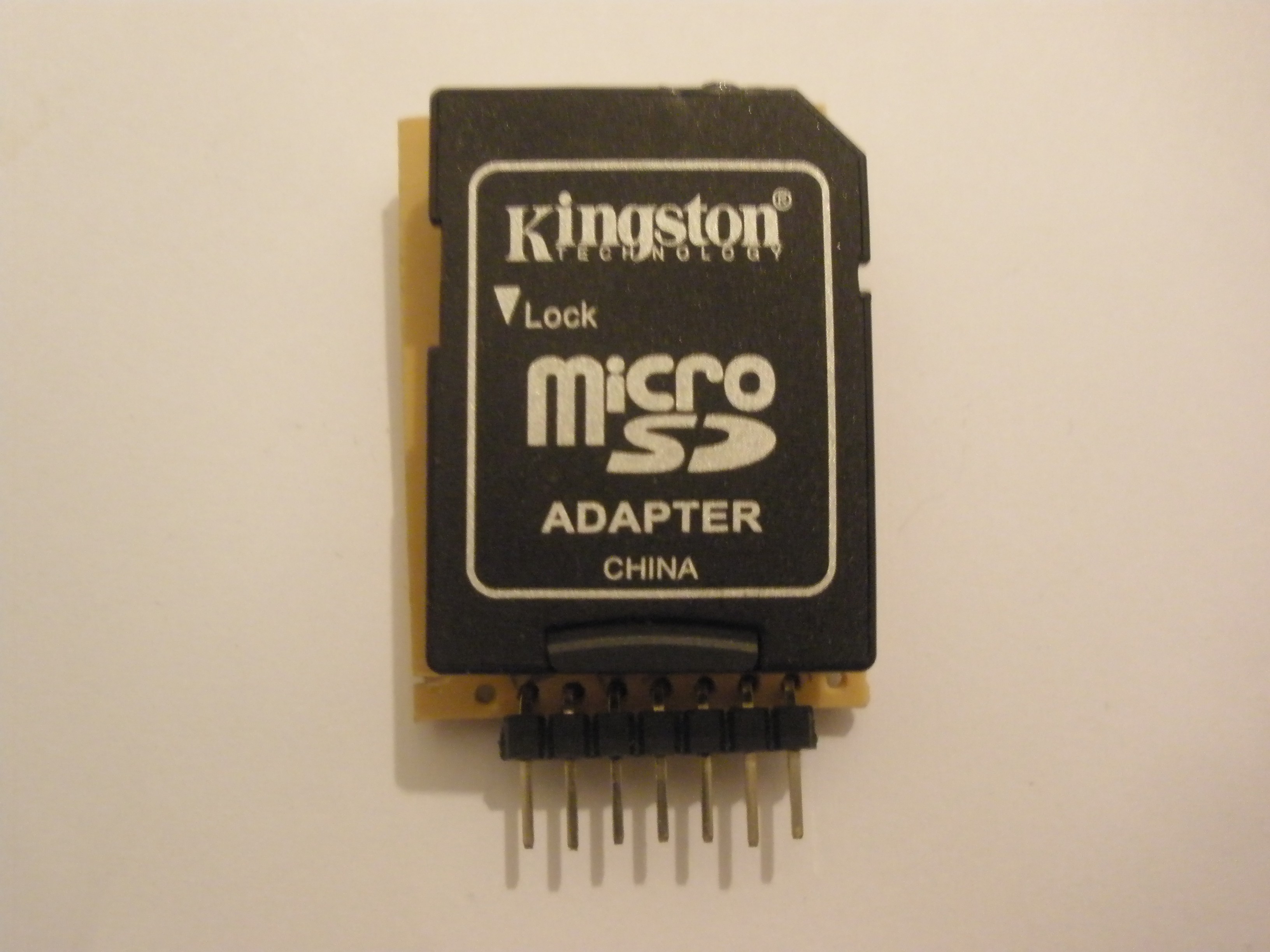 This is a home made micro-SD shield (I don't have the mediums to afford this kind of shield).

There is a program (source code) to test the SD shield to see if it works fine:
https://drive.google.com/file/d/0B9ddqvtGcAxiUWM1bnlYTUROd2s/edit?usp=sharing

This is the schematic to build the SD-shield. It's cheap to build and it works fine.

Adam Fabio wrote 06/29/2014 at 03:31 • point
Thanks for entering The Hackaday Prize! I'm glad you went with a solar + battery arrangement - that's the same setup that NASA is using on Spirit and Opportunity. (Curiosity uses a nuclear system which is a bit more out of reach for us everyday folks)
Keep the documentation coming in, and Good luck!

Martin Ferreira wrote 06/30/2014 at 00:11 • point
Thanks for the information. That arrangement came from a project that I had made with a group at my university. It's great to know that NASA is using that setup (I think I'm going in the right way).

Nuclear energy provides a lot of power and autonomy. For exploration in other planets where the pollution is not a problem, it's the right way to proceed and power the robots.

Thank you again for the information and I will be upgrading the project right now (I've bought and built some stuff).

RAP is aimed at developing from scratch - ie no ROS - the HW and SW of a four-leg robot with sensors enabling an autonomous walk.
Project Owner Contributor

The 2018 Hackaday Prize
Powering LEDs or clocks with potatoes is too simple for you ? Let's build a modular robot powered by a single potato !
Project Owner Contributor

You will learn how to create a system to monitor weather conditions in places with difficult access to electricity with aid of solar panel.
Project Owner Contributor

The 2017 Hackaday Prize
This is a easy-to-build Segway with Arduino Nano.
Project Owner Contributor