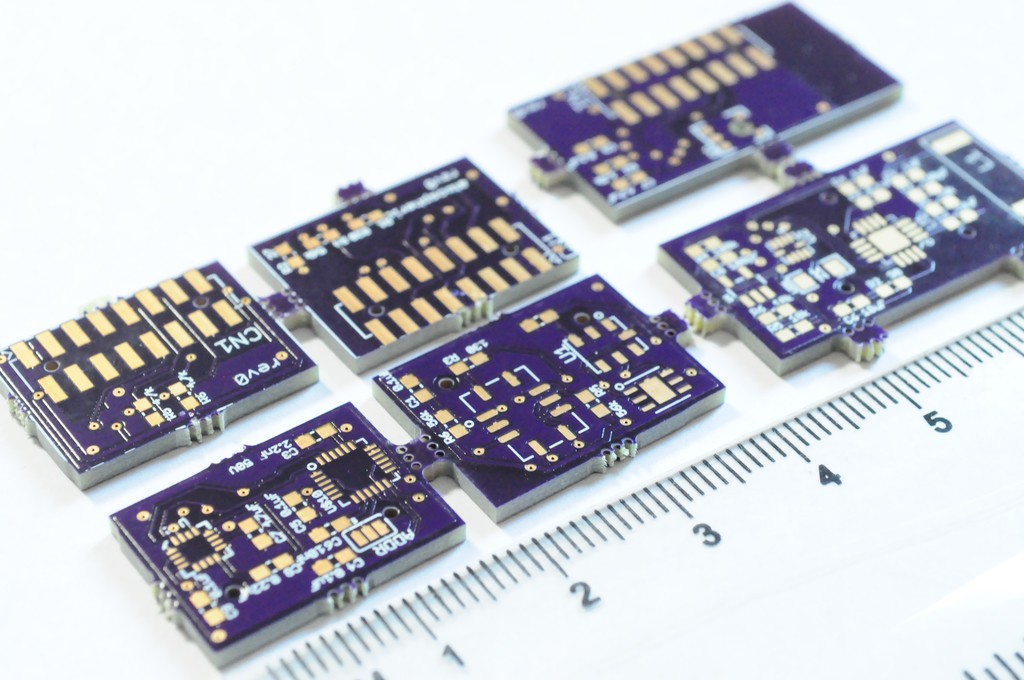 The first three (of five) sensor boards arrived, with the radiation sensor board (and the touch interface board) arriving a few days later.  The spectrometer board is the only sensor board that still has to be designed, and I'm waiting on laying it out until I have a better idea of how the radiation sensor board fits on the back.  The spectrometer is the largest sensor in the device, but if there's room I might be able to lay it down and make the entire device even thinner -- definitely worth holding off a few weeks on.

The first thing that struck me is that these sensor boards are *tiny* -- much smaller than any of my previous boards.  They're about the size of the tip of my finger!  I think the idea of utilizing as much real estate on the outside of the device as possible for sensors (rather than just having them all face towards the front) is really a fantastic design idea for keeping the device small. 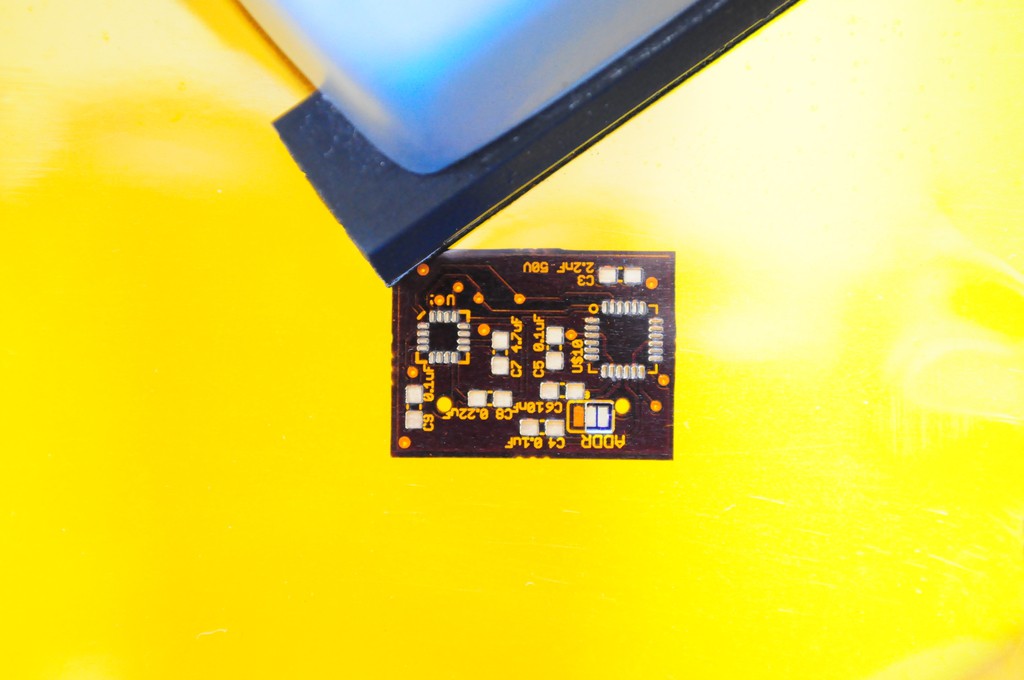 These boards are so tiny that they're a bit of a challenge to attach a solder stencil to. Since invariably many of the parts I use end up having very fine pitches (0.4 to 0.5mm), my favorite method of stenciling is to clamp the board and stencil in a clamp, adjust it so it's aligned, then squeegee on some solder paste.

Here, the sensor board combining the Honeywell HMC5883L 3-axis magnetometer (left) and the Invensense MPU9150 9-axis accelerometer/gyro/magnetometer (right) is being assembled. 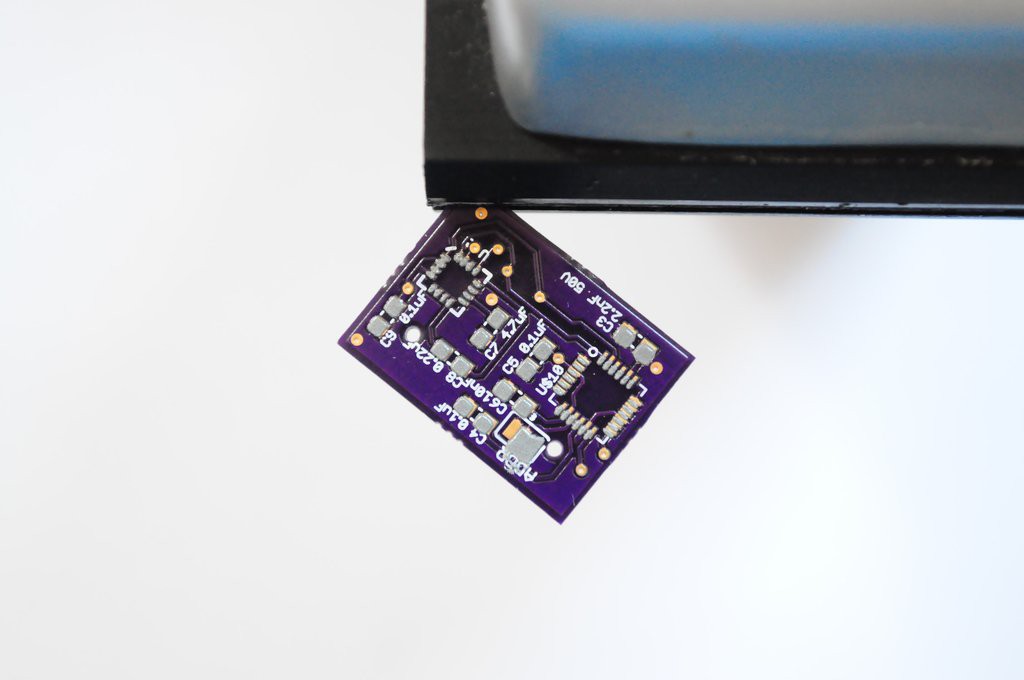 Here's the board, with solder paste.  Looks good!  The paste on the MPU9150 is a little misaligned by a few tenths of a millimeter, but it tends to sort itself out during the reflow process.  I usually adjust some of the more worrisome looking misaligned paste around with a pair of tweezers before placing the components. 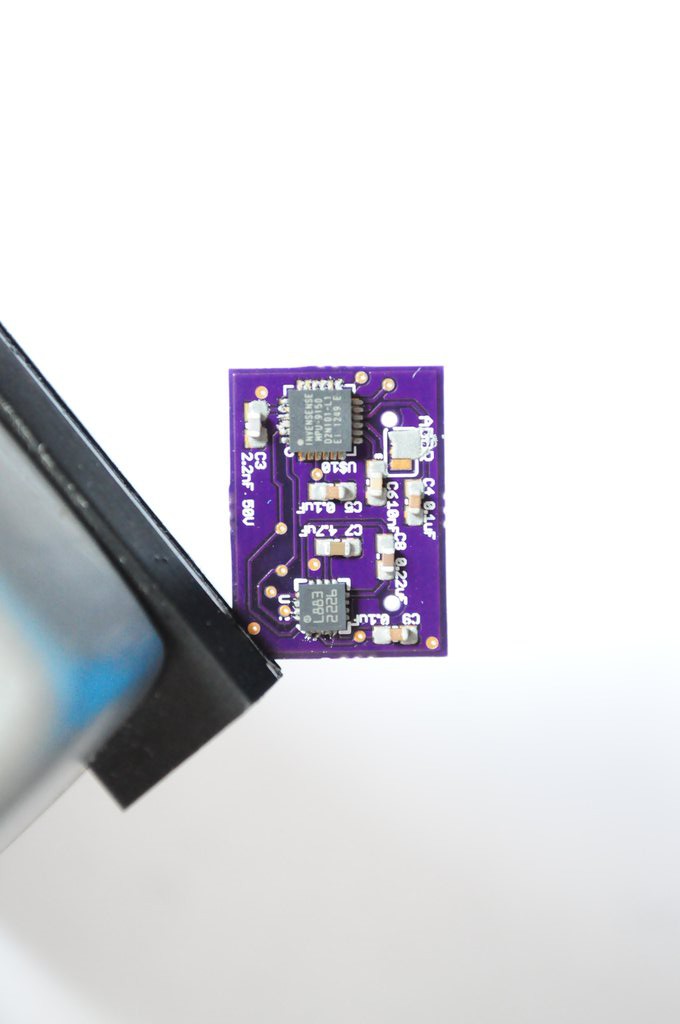 Here's the board with paste and after the components have been placed.  Time for reflow! 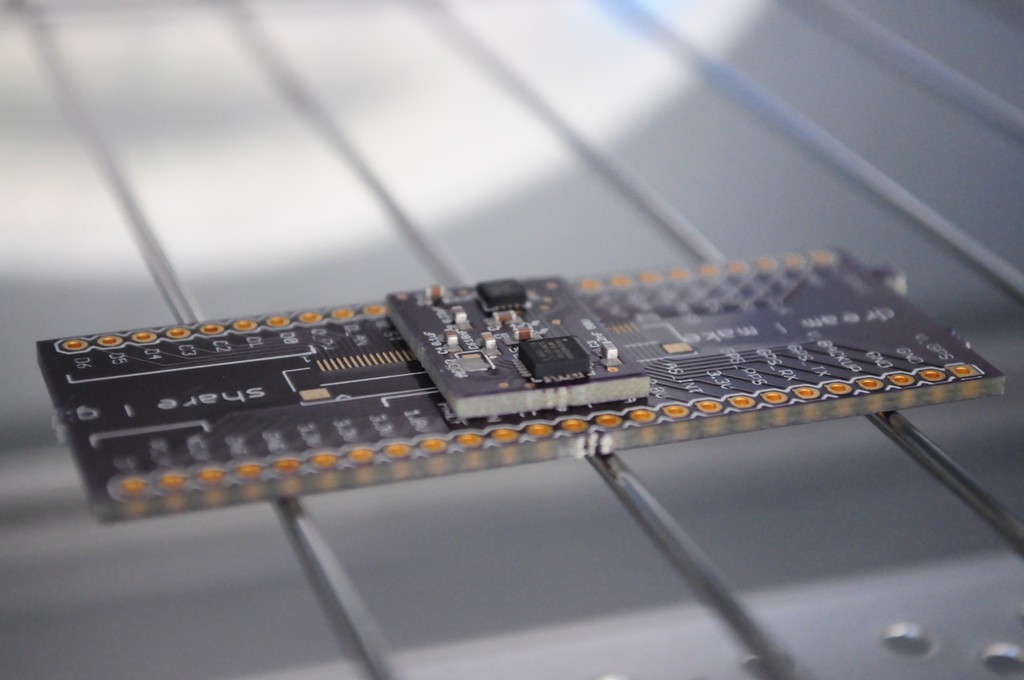 I tend to reflow most of my boards in a $20 toaster oven.  It sounds crazy the first time you hear it, and you feel crazy the first time you do it, but it usually works out very well.  Sparkfun has a tutorial on converting toaster ovens into reflow ovens, but I live a little more dangerously and just set the heat to maximum and bake -- watching the board like a hawk until it reflows, and then popping it out of the oven immediately after. 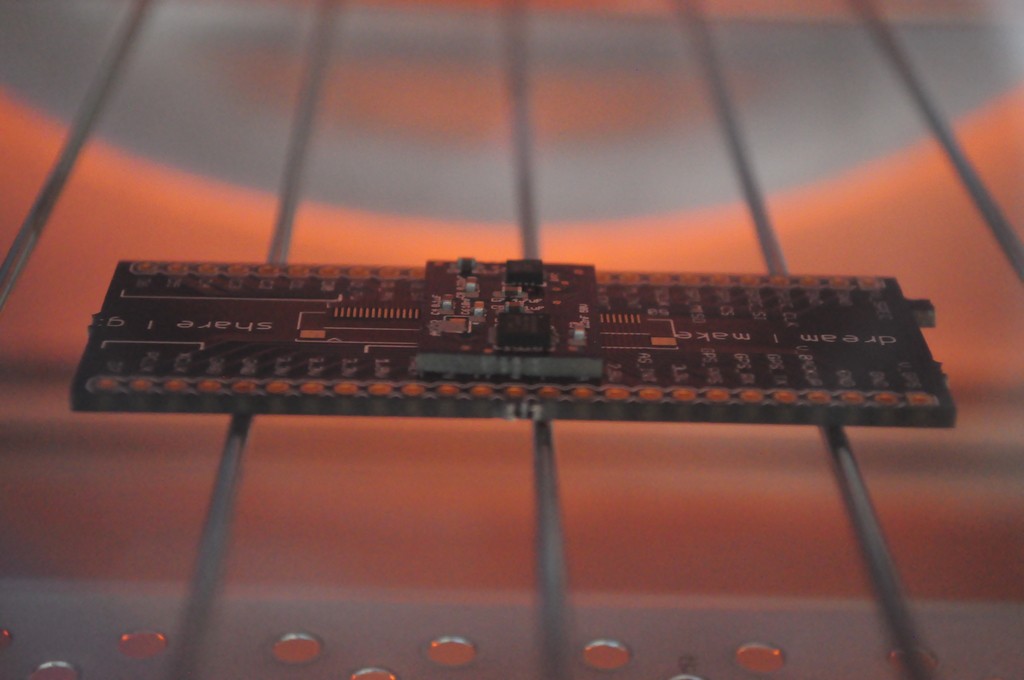 These sensor boards are /so small/ that they will fall through the grill of the toaster oven, so I've layed this one on an old coaster -- er -- breakout board from another project.  I'm also trying not to snap pictures for too long, since I have to pull it out as soon as it reflows or the parts will cook! 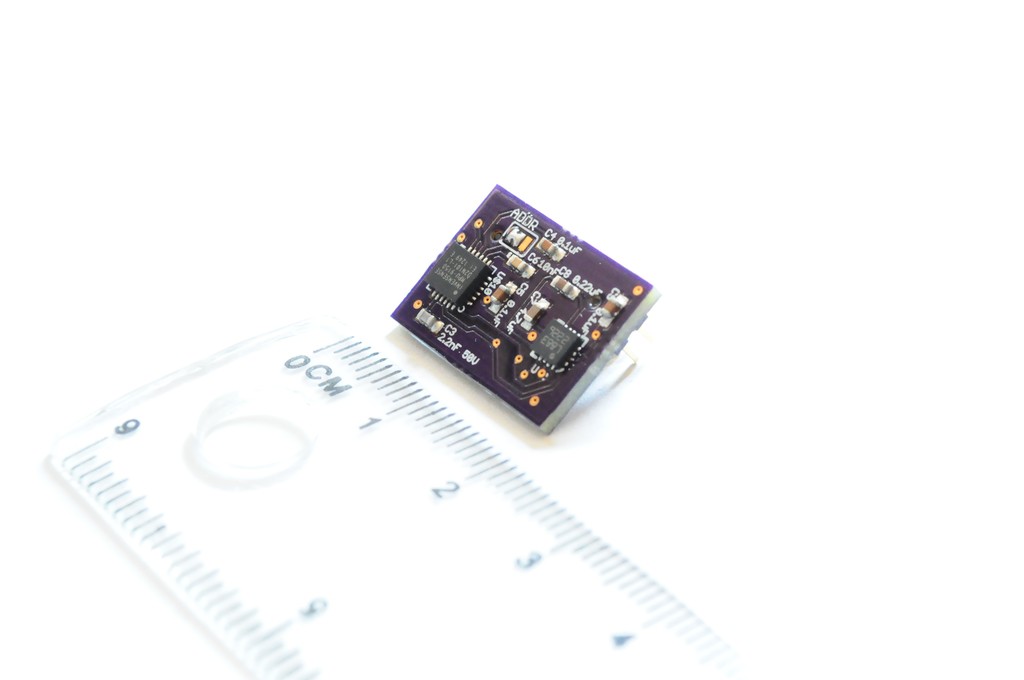 The finished magnetometer and inertial measurement unit sensor board.  Not shown was attaching the sensor board connector to the back of the board -- a 20 pin double-row 2mm-pitch male connector. 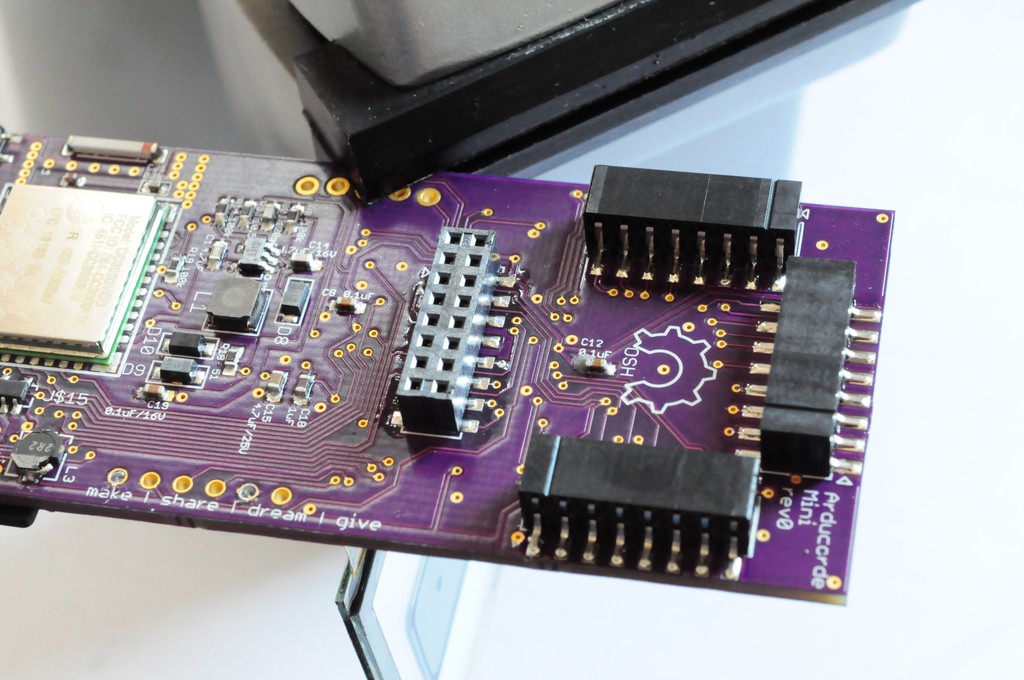 I hadn't yet soldered on the sensor board connectors to the motherboard, in part because they were low on stock, so I could only order enough for a few boards. These have alignment pins that go through the board (and make routing a little more challenging), but it's worth it -- they align in exactly the correct, orthogonal orientations. 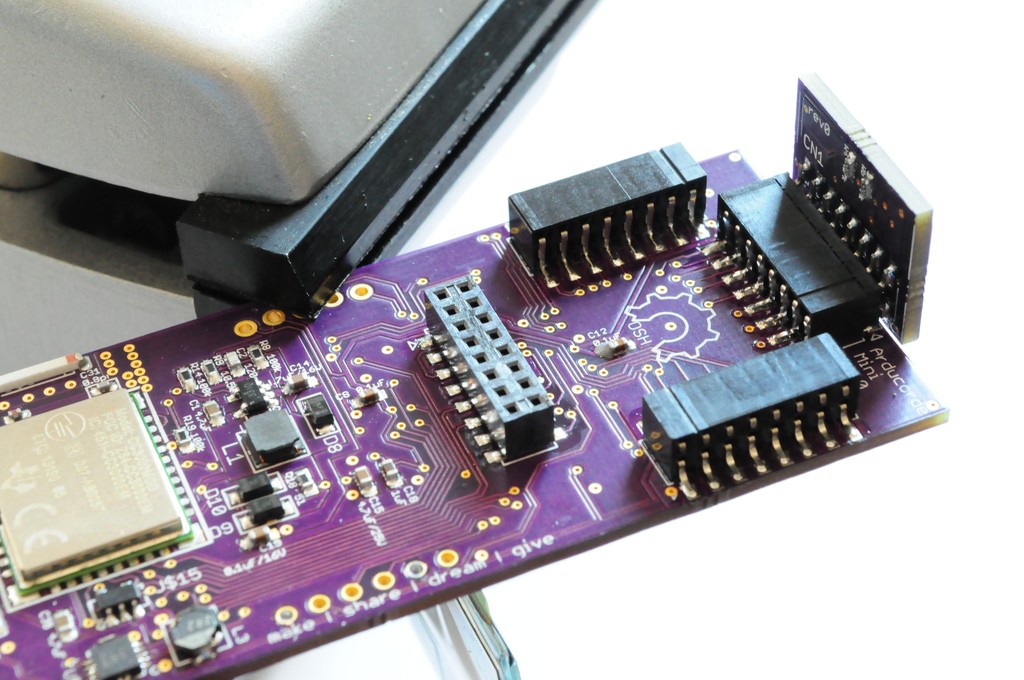 I confess that one of my largest anxieties about this design was the sensor board connectors.  I literally looked through thousands of connectors on Digikey searching for one that was both right-angle, board-to-board, medium-density, strong enough to firmly mechanically support the sensor boards, and larger than a 0.5mm pitch for easy alignment and soldering. There were not many options.  The ones I settled on looked like they would have /exactly/ the right mechanical clearance if the board could be routed within 10 mil of the connector footprint, which is a little tight and the first time I've had such a tight clearance, but it ended up working out famously. 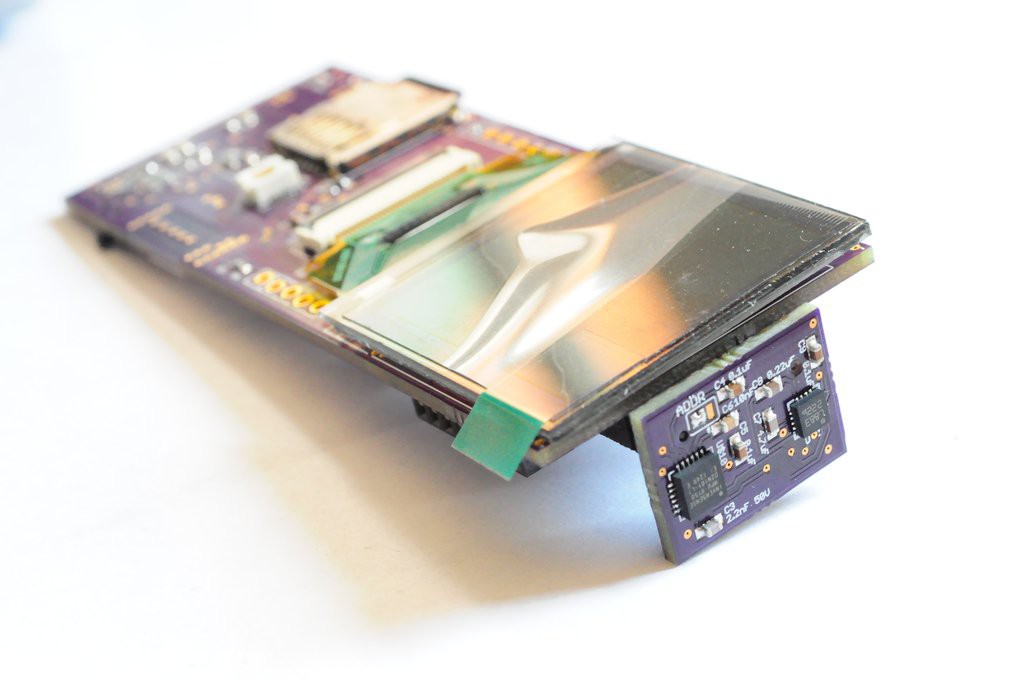 Here's the first sensor board of the Arducorder Mini!  It's connected to one of the 4 interchangeable sensor module connectors on the top, and just waiting for some software to test it! 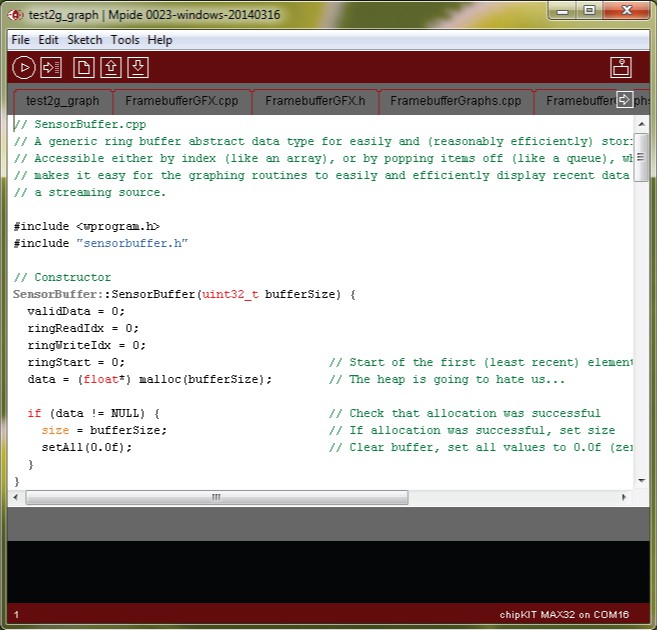 I wrote a quick test for the magnetometer to verify that measurements were coming out correctly, then went to work on writing a bit of software to encapsulate and display the data, and lay the very beginnings of a test user interface.

To help architect the software in a way that keeps it easier for other folks to modify, maintain, and use in other projects, I wrote the beginnings of a few modules:

There are also a few minor challenges that have some up using the standard Arduino libraries.  The Chipkit port of the Arduino core to PIC32 is currently only compatible with Arduino 0023, rather than the newer Arduino 1+ standards.  Some of the libraries for SPI also appear to be a little different.  This is making some difficulties: 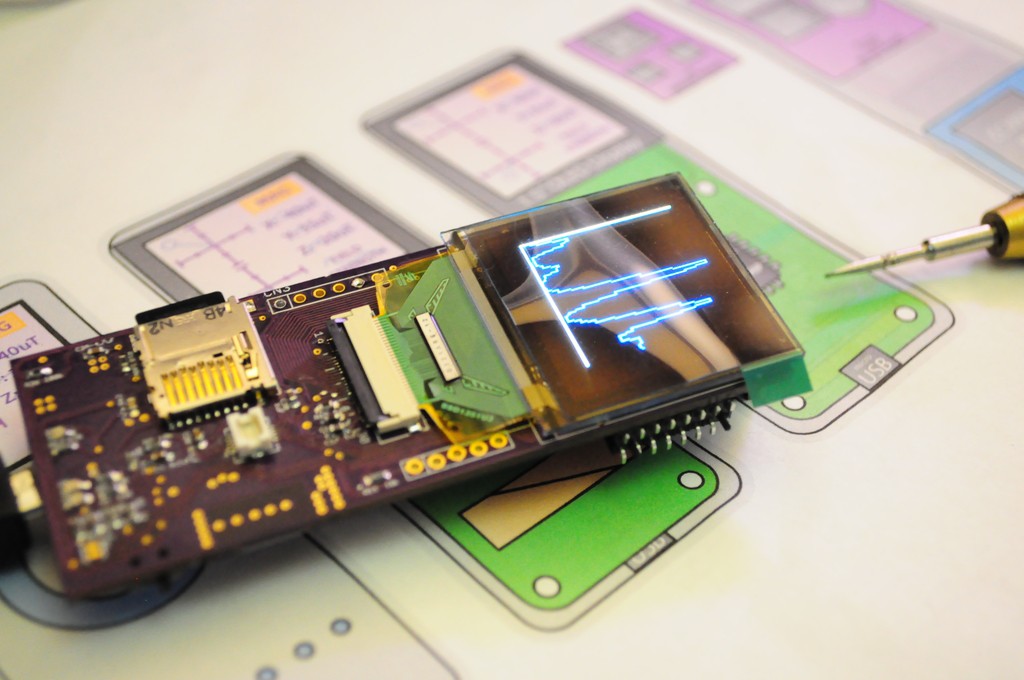 And here it is, all put together and with some very first test software.  Looks great!

This week I also put together the first video for THP describing the concept behind the Arducorder Mini.  It was a lot of fun to put together, and I hope you like it.

Noman wrote 07/17/2014 at 09:27 • point
Dr. Jansen, I am anxiously waiting for day arducorder project will complete and win prize. Progress through is wonderful and remarkable. It is nice to see an excellent idea being translated into reality.

peter jansen wrote 07/20/2014 at 03:32 • point
Thanks Norman. I'm trying to give folks a narrative describing the entire process from concept to finished product, to show it's something very approachable even to small teams if you take it one step at a time.