Our attempts to create a mesh network, plug-'n'-play product.

Mesh networks, in their current form, are notoriously difficult to set up, and for this reason, we are trying to lower the barrier to entry, to the point where your grandmother can set one up. We are doing this, because mesh nets are much more versatile than traditional wireless networks - they are faster, more resilliant to errors, and can work over a wider geographic range. This makes them ideal for a variety of uses, including community networks, coverage of disaster zones, and getting connectivity to difficult-to-reach places.

We are going to achieve this, by providing a prebuilt firmware image, likely using OpenWRT as a base, that is preconfigured to allow connectivity to a wireless mesh network. This should be able to work out of the box, using a web administration panel, or similar, while leaving advanced options (including SSH) available, and should work both on existing routers, and our own hardware, with the correct firmware already loaded.

OpenWRT: GNU GPLv2 (note that OpenWRT itself is built with many other packages, some of which may not be released under the GPLv2 license. For more information, see http://wiki.openwrt.org/about/license. 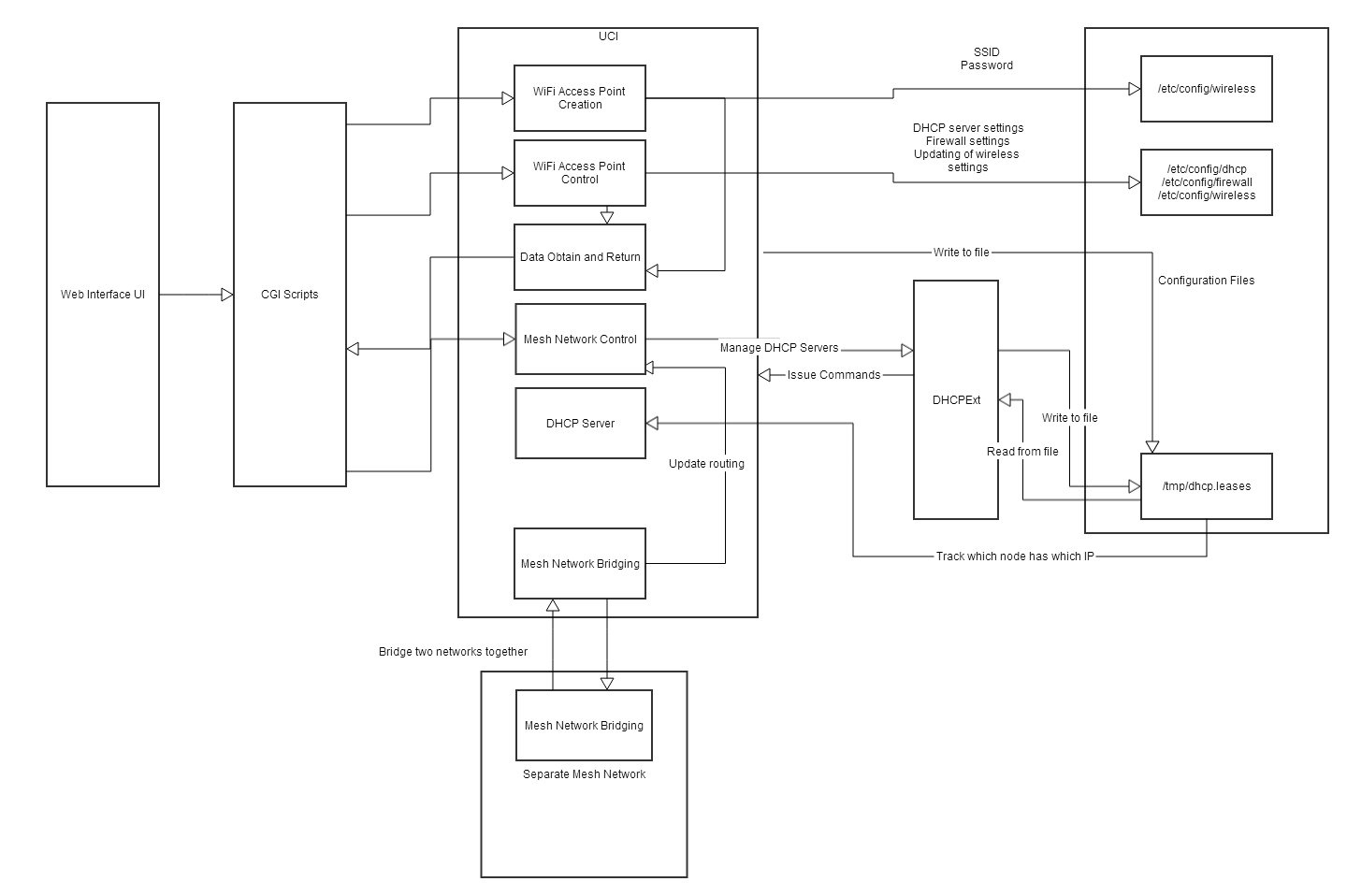 This project was undertaken to simplify the setup of mesh networks. The reason for this is that mesh nets solve a number of large issues in networking, including (but not limited to) link oversaturation, and single points of failure. However, this is offset by the fac that they require significant knowledge in computer administration (and especially, oftentimes, the Bash shell) to set up. Thus, our goal is to simplify this.

We wish to provide 2 options to end users - a piece of hardware, likely based on an ARM or MIPS processor architecture, running our system image, with wireless and ethernet network interfaces, as well as the image itself, such that those with the prerequisite knowledge have the option to flash their own hardware.

Our goals for the software are:

- to support firewall filtering, using TCPDump BPF bytecode (with the option of handwriting the code, or using the web administration panel)

- to allow automatic failover of the DHCP server, to allow for no single point of failure

- to utilize the Multipath TCP specification, to allow the mesh to make use of multiple connections to the public Internet (secondary goal)

This will be built upon a base of OpenWRT, to allow for a greater flexibility with regards to hardware that can be used, and to take out most of the legwork involved in the generation of a working system. This also allows end users, with the knowledge to do so, to customize their system to achieve other goals as well, dependent of course on the limitations of OpenWRT and its available packages.

The control thread, CT, is in charge of the overall management of the other four threads. It interfaces with the UCI and a web admin panel to allow external control of the software, and to allow it to issue commands to other pieces of software, and handles the stopping and starting of the other threads. It also handles the status as an active node based on commands given by PC, the processing thread.

TX simply manages the transmission of heartbeats across the network. It will broadcast heartbeats containing configuration and state details, if it is the active DHCP server. It will also send a heartbeat directly to it's defined target.

RX receives heartbeats and replies from the network, then attaches the IP address of the sender, and forwards the data to PC.

PC is responsible for the processing of traffic. When sent heartbeats are received from the TX thread, they are stored in a buffer.

RP receives received and processed heartbeats from PC, forms a response, and sends it out onto the...

PointyOintment wrote 07/10/2014 at 16:23 • point
I gave a skull as a result of the recent improvements to the description. I still have a couple of questions, though:

1. Will it be possible to disable the device-to-host filter so that one can monitor the network using Wireshark or similar?

2. Why did you switch from USB to Ethernet? For compatibility with existing wireless routers?

connorwood71 wrote 07/10/2014 at 20:25 • point
1. The device-to-host filter is purely optional - by default, it will be a simple routing algorithm (is the packet bound for the host? If yes, send on), but will provide provisions for the BPF bytecode, generated by TCPDump. Of course, as this will be a Linux system, any and all packets can be sent to the host, if it is set up right. It was mentioned in the description that both a web administration panel, and an SSH (or similar) configuration method will be available; I'm not sure if we'll put such an option on the web panel, due to its ability to be abused, however it will be easily accessible via SSH.

Paul_Beaudet wrote 07/09/2014 at 15:55 • point
Think that this probably a really cool project. Focus on painting the picture of the over-reaching goal in the intro, so that I want to dive into the details. How does this potentially bring mesh networking mainstream?

lpauly wrote 07/10/2014 at 15:33 • point
I've rewritten the description and a part of the details section, to hopefully better reflect what we hope to achieve. Thanks for letting us know, and let me know if there's still any ambiguities.

Paul_Beaudet wrote 07/10/2014 at 16:26 • point
First line did it for me! A lot more clear. Have you though of more efficient/social ways to share data in a mesh? Seems to me there would be a lot of opportunity in that area. Or is the main focus on lower the barriers to getting the end user to an AP?

connorwood71 wrote 07/10/2014 at 20:21 • point
The focus, at the moment, is to lower barriers to entry, while keeping the mesh itself simply as a routing mechanism. You are absolutely right that it would be interesting to play with that sort of thing, and indeed one of my other projects does something similar, however we're trying to keep this constrained for now, lest feature creep sets in. If we find that we have time at the end of the project, I might see if we can take a look, however.

Neon22 wrote 07/09/2014 at 05:07 • point
Wouldn't it be even better if it ran on routers ddwrt and openwrt already run on. Then we could use existing home routers and frre ourselves from ISPs....

connorwood71 wrote 07/10/2014 at 12:26 • point
I'm going to assume that by freeing ourselves from ISPs, you're referring to community mesh nets. I can definitely see that as a worthwhile goal, and personally love the idea of using existing routers, and probably openwrt or ddwrt, to significantly lessen the workload.

However, you must also bear in mind that, while working on existing routers would lower the barrier to entry for those of us who are technologically literate, and be possible for many others with a bit of forethought and detailed instructions, it would raise the barrier to entry significantly for many people, who do not wish to flash firmware to a device, either not trusting themselves, not wanting to void the warranty, or whatever else the reason may be.

For that reason, providing our own hardware as well as working with existing devices is, in my opinion, the best way forward, as it opens up the possibility of use to as many people as possible. However, with that in mind, we will focus, in the beginning, on leveraging existing devices, due to the fact that it accelerates development, and lessens the amount that can go wrong. It also gives us options for debugging when we do start on our own hardware, as we will have a working reference implementation, with firmware we know functions how we want it to.

Thanks for the feedback, and for the idea.

We love that your project is all about 'connected'. Sounds like your antenna could be very useful for communities to extend their networks more easily. We're looking forward to seeing the details.

Also, I thought I would let you know that we've updated the submission process for The Hackaday Prize, so if you want to officially enter this project - login and use the 'submit to' under your project images on the left hand side.

Also, we're starting community judging shortly, so now is the time to make sure you've added some details to the project to give it the best chance of winning. You may also want to add a bit more info to your profiles, so we can get to know you better.

Got any questions? Give me a shout. Good luck