For biotINK - the bioprinter of tomorrow

a novel DIY bioprinter via hijacking an ordinary 3D printer

What we're all about

It is our goal to be able to print biological materials and even cells in a high precision manner for an affordable prize to assist scientist like us to hopefully allow for practicable 3D bioprinting for skin grafts and in the future maybe organs. As our team takes part in the iGEM competition and for this tries to modify cells in order to make them printable, we will be the first to test the device will be able to help us make bioprinting work. 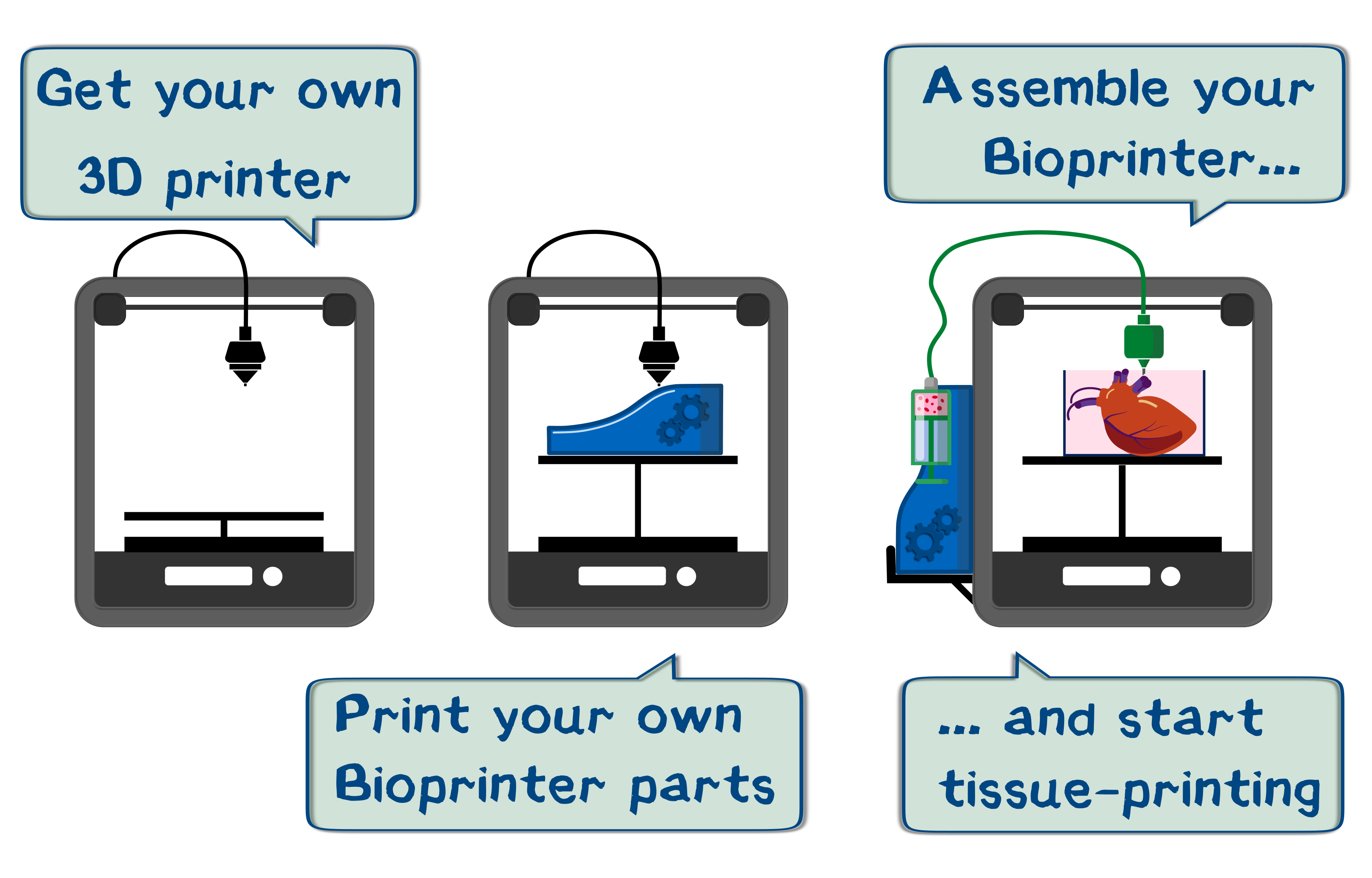 So therefore we developed a system that will allow us to make use of the already proven capabilities of the easily obtainable Ultimaker 2+ print platform.

Instead of having to aquire expensive building blocks the end user, e.g. researchers and doctors, will be able to cheaply print nearly all parts by himself except some simple metal parts and standard wires. Due to the minute effort required for the transformation from FDM printer to bioprinter our system can be utilized and fitted to its user's needs without extensive mechanical knowledge.

Why Bioprinting is an important future technology 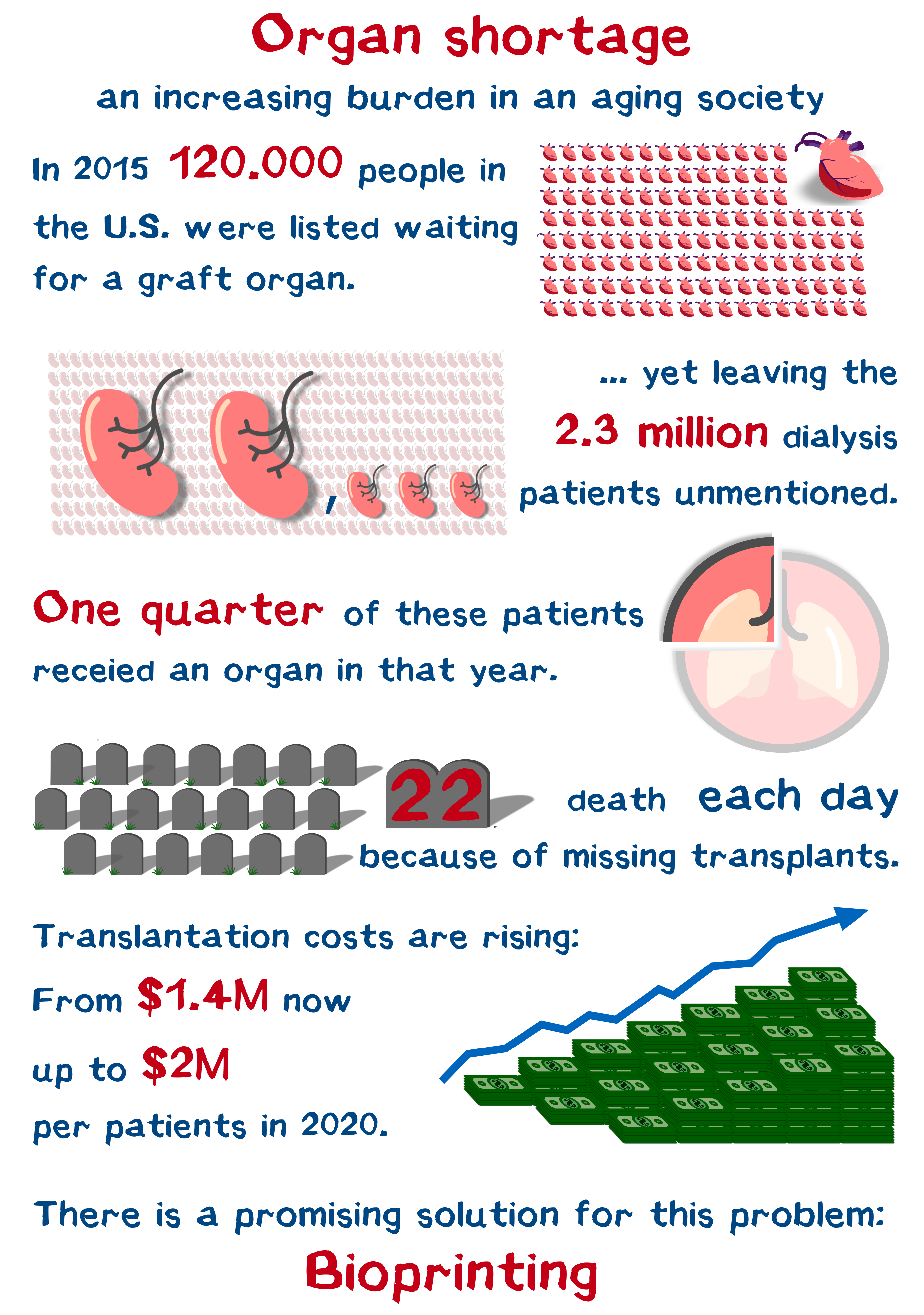 One of the major limitations in medical care is today the shortage of graft transplants.

In 2015 there were 120.000 patients waiting for a graft organ and only 1/4 of these patients received a new organ in this time period.

Due to this shortage in organ supply, there are only in the U.S. 22 dying patients per day.

As there number of donor organs is not expected to rise, there must be another solution for the supply of organs for transplantation.

This is the point where Bioprinting comes into play:
This technology is exprected to produce different kinds of replacement organs in this century.

For this reason we are sure that the development of an affordable, open source Bioprinter will advance the research on this field and is thus a valuable contribution to the HACKADAY's category "ASSISTIVE TECHNOLOGY".

We utilize the already existing second extruder outlet on the device to power and control our self-designed syringe pump.

The pump connects via a capillary to our new print head with adapter for exchangable cannula.

As the machine has to handle liquids it is not only necessary to design a build plate adapter for various cell culture plates, tubes and jars but also to modify the firmware.

Due to the addition of containers we will add an optimized user interface for the slicing software as well as a collision avoidance script, which will correct the machine code for inaccessable areas.

For the purpose of quality control we are planning to add a array of RGB LEDs with a touch based user interface, which will allow for an improved optical control via a webcam and wavelenght-spcific image analysis. This will be especially for cell culture applications as in synthetic biology the use of special fluorescent dyes and protein makers is essential.

Below, you see an exploded view of our syringe pump that holds a 3 ml syringe. Its purpose is to deliver a constant and precise volume flow according to the information it receives from the printer. A stepper motor rotates a threaded spindle to create a translation that pushes in the syringe’s plunger. The thereby displaced cells are pushed through a capillary to the print head. This was inspired by a simpler 3D printed syringe pump. Subsequently, several improvements were made, which include the following:

The motor is running in microstep mode to provide a smooth, consistent movement. Since a second extruder is already designated in the Ultimaker 2 plus, the stepper motor is connected to the existent outputs and the engine speed information is transformed using a simple formula.
The device is assembled in the following steps:

You will need a 2.5 mm Allen wrench, some grease and at least a file

Below, you see the explosion view of the print head. It replaces the original one and holds a dull needle that is placing the cells in the Ibidi slide.

Assembly: Only work when the printer is unplugged! 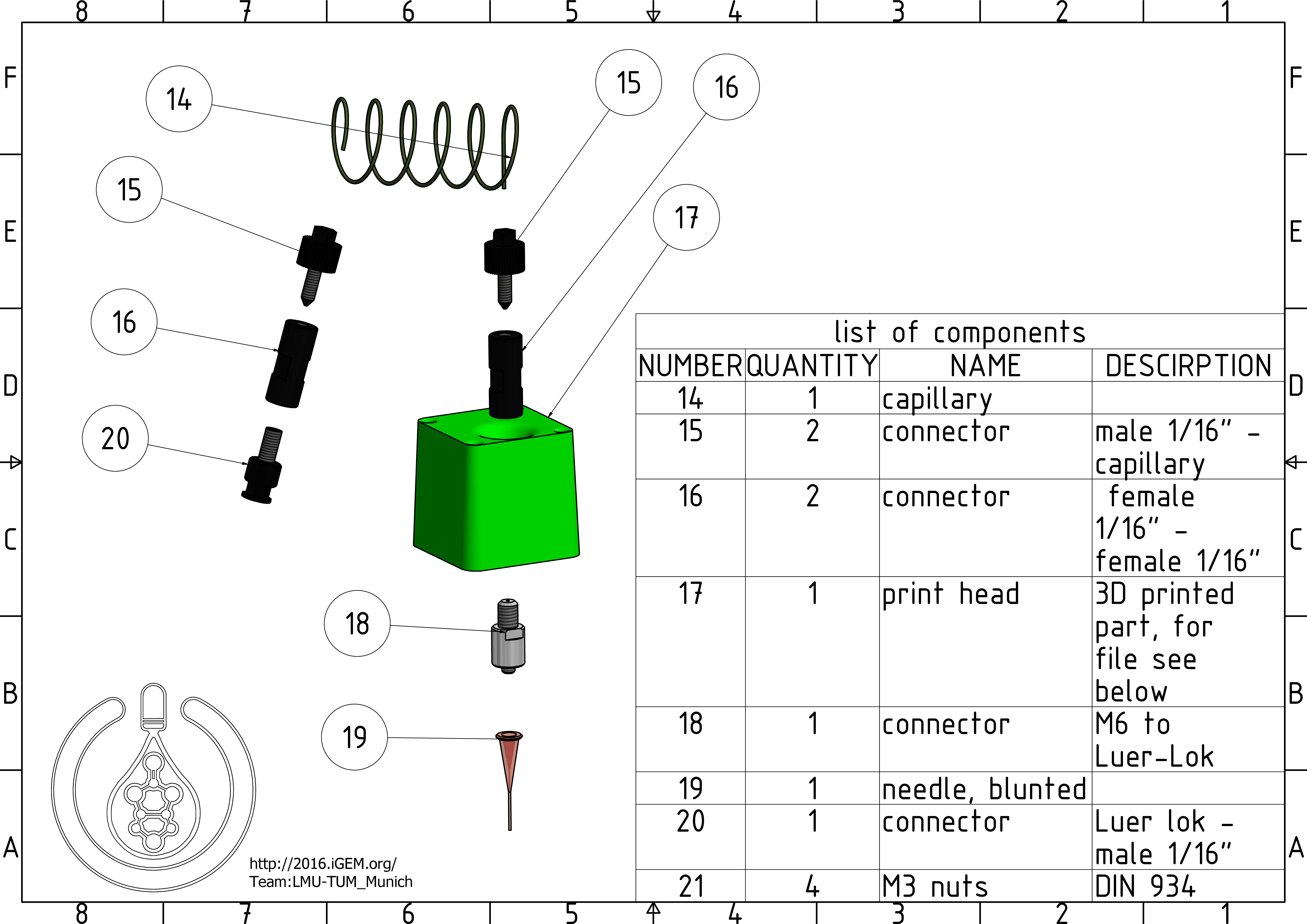 Assembling it is a child's play - literally. Just assemble the puzzle and replace the glass plate with it. It holds the Ibidi slide in place, which you can place in the middle hole. The other ones are for calibrating the printer's default z value. 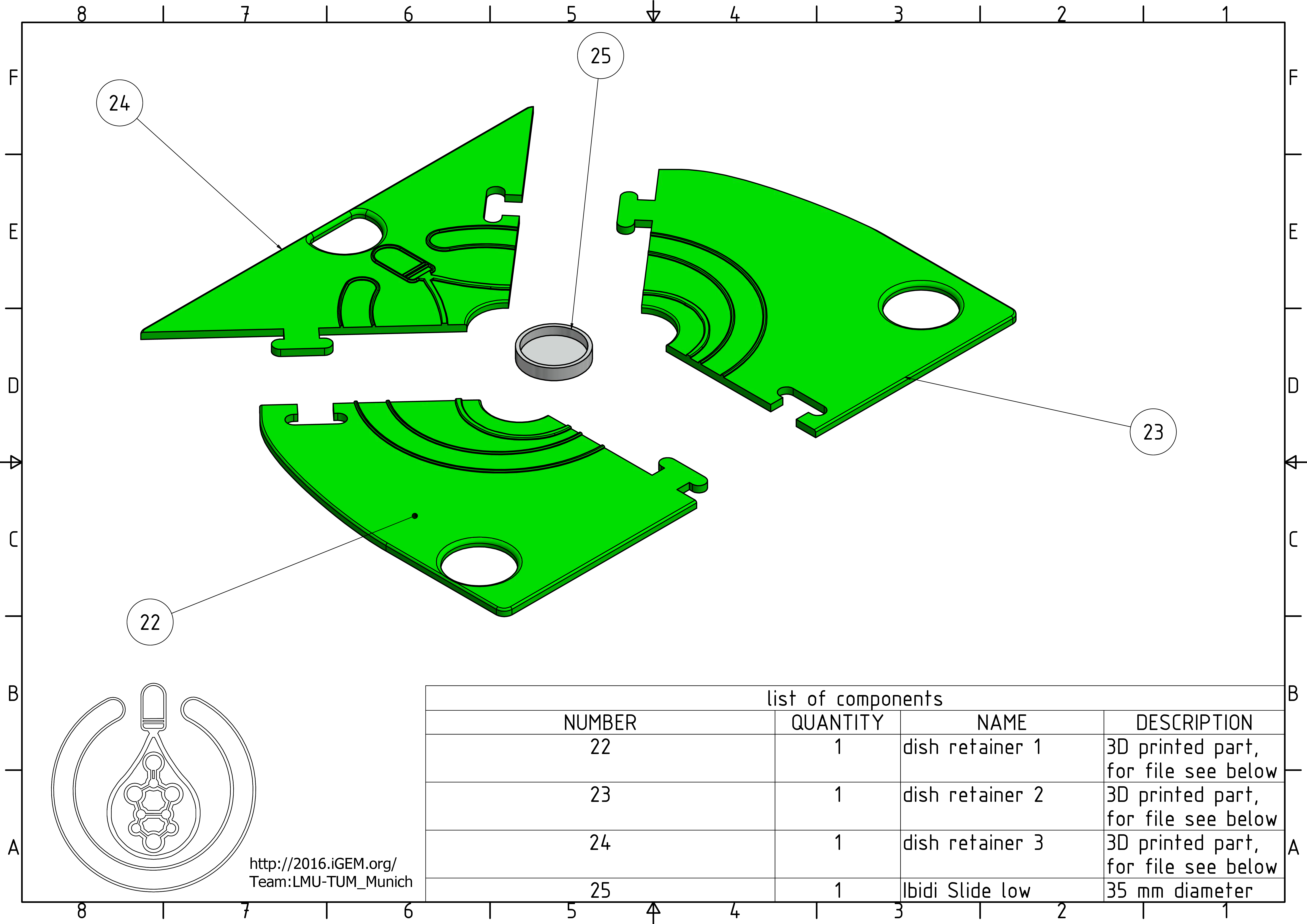 Ultimaker's slicing software Cura and the printer's firmware were modified so that there is no possibility to destroy your printer by colliding with the dish, it's holder or any other component. Just place your 3D file in Cura, fill up the syringe and start printing!

In the following list all used components, together with the used source and the rough prizes are listed. Prizes incluede all taxes that applied to this kind of article, shipment costs were not considered.