Our hand is a very versatile and dynamic tool for our body. We use it to interface with the world, a tool to touch our tangible surroundings. Over time it has evolved to take on other roles to communicate and pass on information. People often gesture to indicate something urgent or to invoke some pre-established meaning (awkward turtle, anyone?). Sign language, on the other hand, is used all over the world in deaf communities to converse. With the rise of interface technology, we have naturally developed gestures to touch screens (swipe, hold, press) and future technology designing with the hand in mind. But as the complexity of gesturing grows, we grow all to hesitant to interact and socialize with others - only at a distance perhaps. So I took it on to explore others ways of tactile interaction between each other.

The good ol' handshake. It can be a sign of encouragement, wishing of good luck, friendship or excitement. I really wanted to capture the spirit of joy that comes from interacting with others and the more contact, the more memorable an experience might be. Babes are said to need much physical contact in their early stages. As we get older we loose such intimate moments in our lives but imagine if we could design these sort of analogue moments into our technologies and interfaces? We've seen our texting and messaging become usurped by emojis and memes. We are finding more ways to express ourselves in the digital world, new combinations and mashups. It's interesting to note that most of this is very visual, involving little physical interaction and haptic response.

But what if we used handshakes to talk and interact? This may be particularly useful in situations where talking might be difficult or hindered. Having a glove that is able to read your gestures in particular pattern sequences can be measured through the data coming from the sensors on the glove. With IoT connected smart objects, this glove can ideally send or receive messages through the smartphone - opting to have the handshake become the vehicle of transfer. By inserting more human touch into our technology, it addresses a fundamental social handicap in our society. It smartly updates the "handshake" into the 21st century. 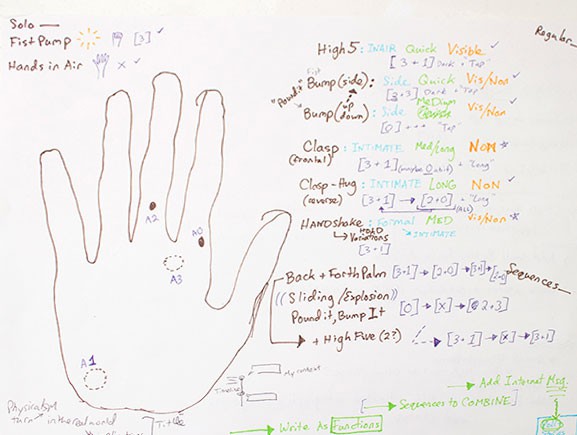 I drew out various hand formations that would be easily read by the photocell, focusing only on hand gestures for this prototype. Several positions were outlined (bottom of palm, center of palm, index and middle finger) that could be combined to pinpoint which hand positions were being held and in what sequence (say for a longer handshake). For example, based on the light, the position at the bottom of my palm might have more light than the one at the middle when I go up for a high five because the darkest area would have to be that palm to palm touch. Messages can be sent according to any number of custom combinations.

Next - building out the glove, getting it to talk through the cloud and programming.