The Zytek drivetrain has a built in inverter with proprietary CAN interface. This project will replace just the microcontroller board.

This drivetrain is available pretty cheap from EVwest (they may offer a discount since it's non-working without a CAN controller.) Inside the motor casing there is a very beefy motor controller with 800A IGBT module, filter capacitors, isolated gate drivers, isolated current sensors, 12V isolated DC-DC converter, and a controller board with proprietary CAN interface. We can't interface with the controller board without reverse engineering the CAN protocol. This is possible, and I've been told others are working on it.
However, we should be able to replace the controller board quite cheaply using an InstaSpin Launchpad from TI coupled to a custom interface board. This can then run custom software and interface directly to throttle and regenerative brake signals and provide motor data to a cabin display.

I've been doing some work on this project, haven't gotten around to documenting it, so here is a run down:

- Talked to a group of people who have an electric smart car and are working on reverse engineering the CAN protocol, see http://illuminatimotorworks.org/blog

- I took a stab at it myself with the CAN datalog files they have. Could get the DC/DC converter operating but not the motor spinning. I decoded a couple of the CAN packets and worked out the checksum byte (it's "CRC-8/SAE-J1850" btw) and the structure of a couple of the packets but there are too many unknowns. Right now I've put this in the 'too hard' basket, may revisit. Perhaps I'll head over to St. Louis for one of their hackathons.

- Finished laying out a PCB for my replacement control board (using a TI Piccolo launchpad running InstaSpin much like my ebike controller) Got this board spun and assembled.

- Attached the control board to the gate driver board and current sensors, got the motor analysed and spinning with sensorless FOC. Messing around with firmware examples I got it working with the position sensor, although having trouble with the transition from sensored to sensorless.. work in progress.

Pictures are fun, so here is the assembly: 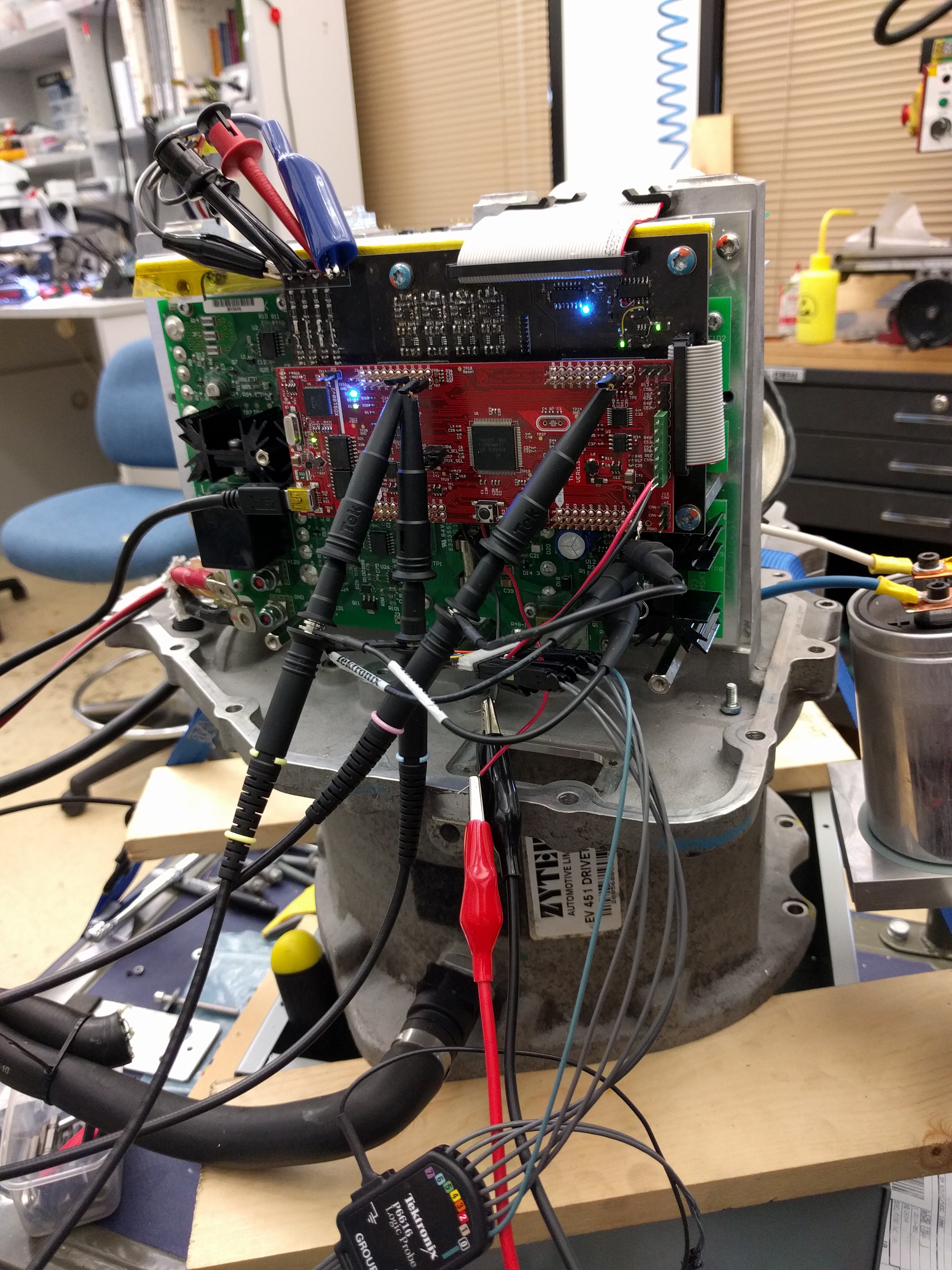 I'm keeping my github up to date with hardware and software files. will transition the Altium files to CircuitMaker shortly.

Any thoughts on this over the past couple years? Would love to hear if any updates.

Hi Jarrod, do you have part numbers of the engine and the gearbox? Thx

Hi Jarrod, This is great stuff. Is it possible for you to share some of the motor dimensions?

Dimensions for the motor+gearbox? I do have a rough 3d model of just the motor from when I was considering making an adapter for the mitsubishi gearbox. Here are the dimensions from the zytek website.

Obviously this doesn't include the Daimler gerabox

Came across this while seeking affordable integrated electric drives for EV conversions.  I'd really like to see a solution for multiple motors for AWD and other scenarios, transaxles like this are getting pretty close.  Thank you for your efforts!

This is awesome; I've been waiting for someone with some solid EE skills to tackle this... the package is so cheap for the components you get.

Out of curiosity, have you considered trying to spoof the CAN bus signals of a properly operating SMART car to get the existing logic boards to work?

That would be the easiest and probably safest way, alas I don't have access to a working car to sniff the CAN packets. There is a group in Illinois working on this approach. I'm getting in contact with them and will see, maybe developing a CAN control box will be the way to go. In the mean time, I'm gonna do what I can with my current approach.