When the Monoprice Select Mini was first featured on HaD, the recommended first modification to perform was to swap out the hot end for an E3Dv6, using a 3D Printed mount. Before I even had the printer, I had ordered a $6.00 clone from Amazon, with a 0.25mm nozzle, anticipating that I would need the new hot end to be able to use commonly available nozzles in various sizes and materials. At the time, I was not aware that the stock hot end could work with common nozzles. I could easily swap out the stock nozzle and save some money, but after thinking about it a bit more I decided that I really wanted to have a separate hot end cooling fan and hot end layer fan, for better control over bridging and overhangs.

I looked at the available fan mounts that had been published when I received my MPSM, and I was not excited because they offset the nozzle quite a bit from stock, they pushed the nozzle down in the Z axis, and forward in the Y axis. This causes the nozzle tip to move almost all the way off the font of the build platform, and requires that the leveling screws get cranked way down to clear the nozzle. 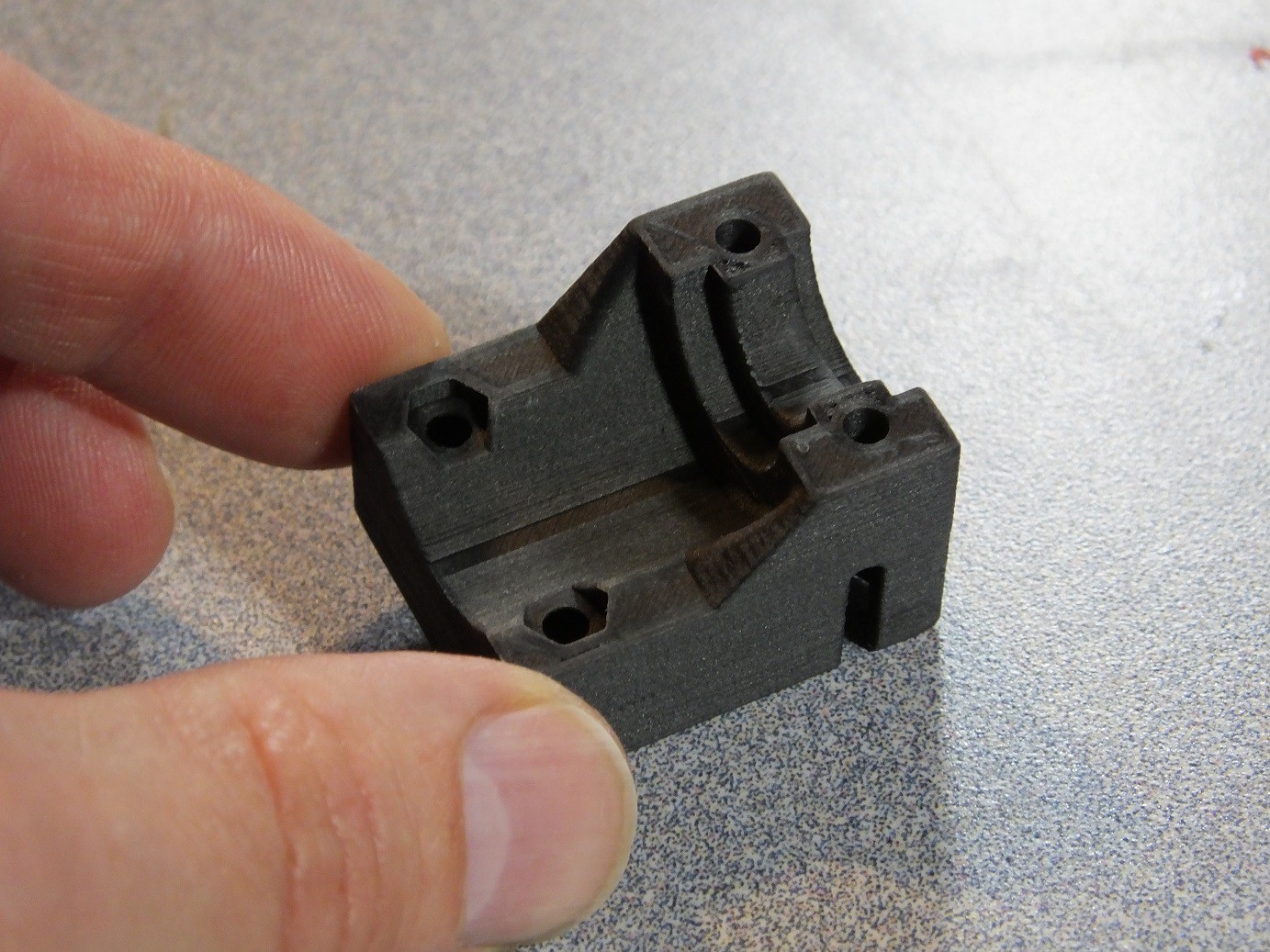 I didn't like losing build volume, due to the offset, so I started work on my own adapter design that retained the position of the nozzle as much as possible. Once I found the correct position for the nozzle, it was apparent that the strength of the screw mounting would be compromised because the space available was very thin. But I realized that I could extend the bracket inside the hollow cavity in the carriage, and use the walls and bosses in the cavity for strength. The screws would merely hold the bracket without experiencing much force. 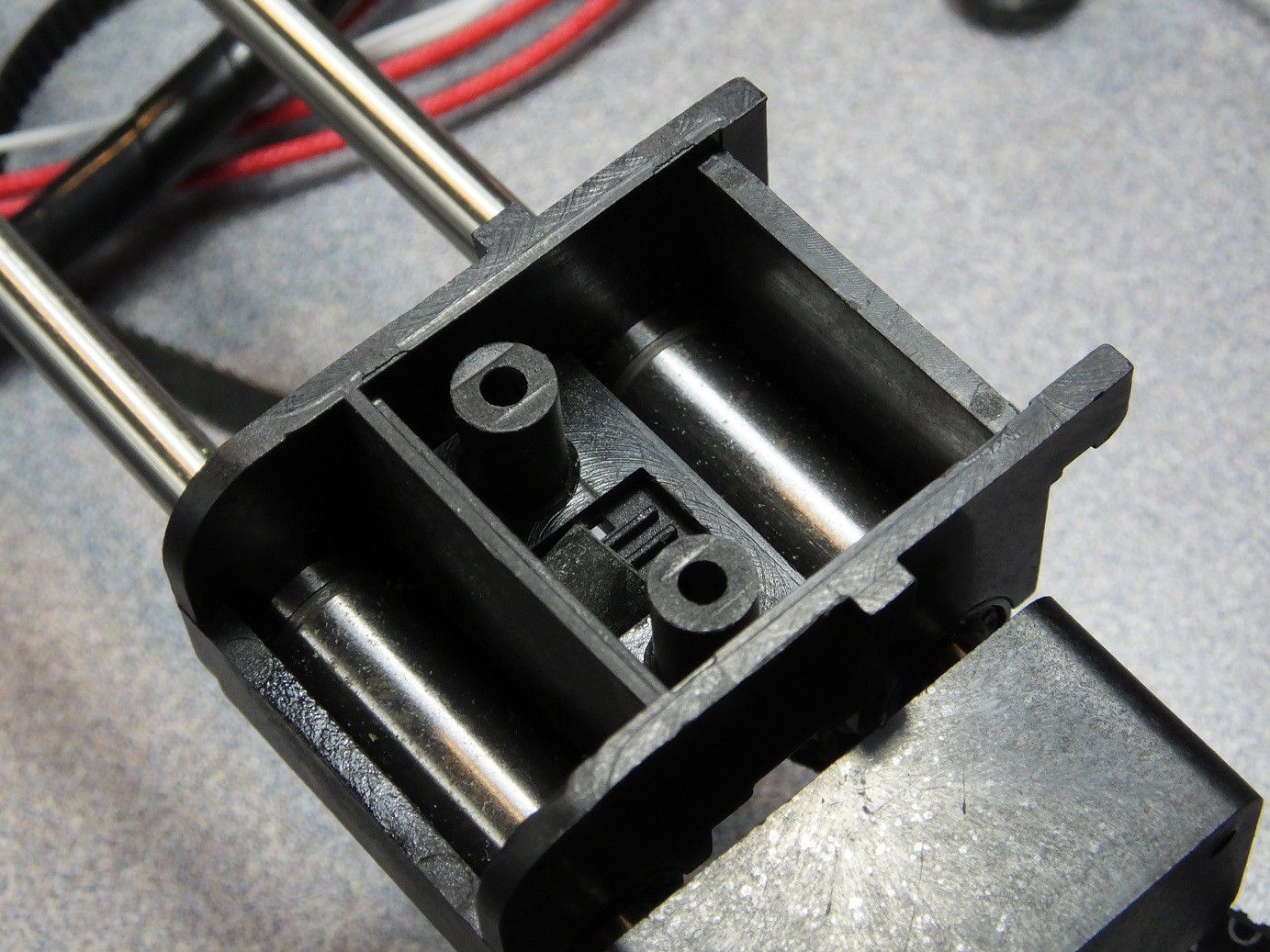 With the printer torn down to this level, I noticed the way the X-Axis belt was fastened, and it gave me an idea. I made a similar tab on the rear of my hot end adapter, so that the belt tension would hold it in place instead of the screws, which I would eliminate.

Ultimately, when I tested this design, the flexibility of the belt did not hold the bracket as firmly as I wanted, so I put the screw mounts back into the design. However, I noticed that the belt grip on the back actually acted like a belt tensioner, by removing slack from the belt. 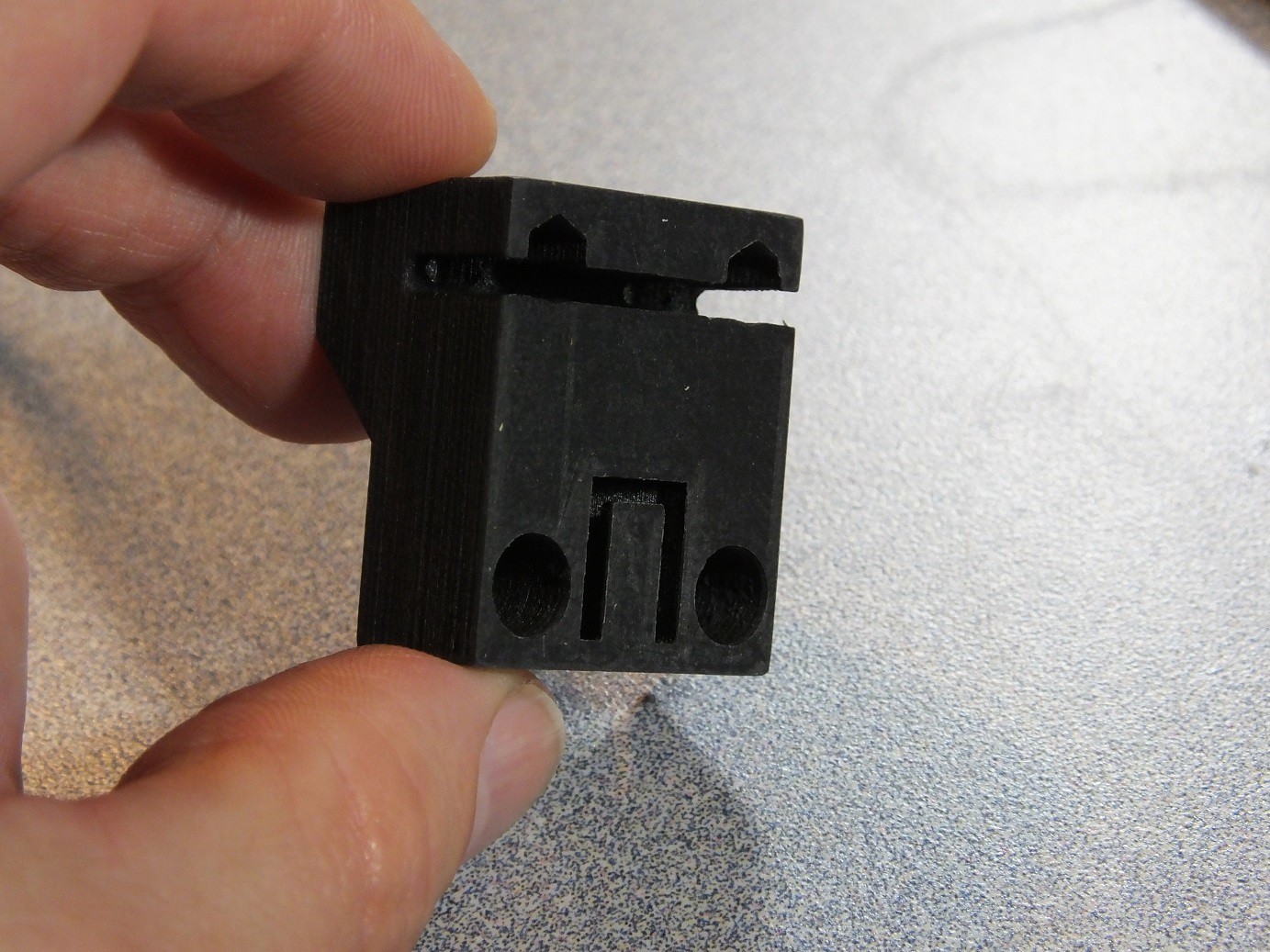 The final design includes both the belt tensioning feature and the screw bosses, and holds the mount very securely. 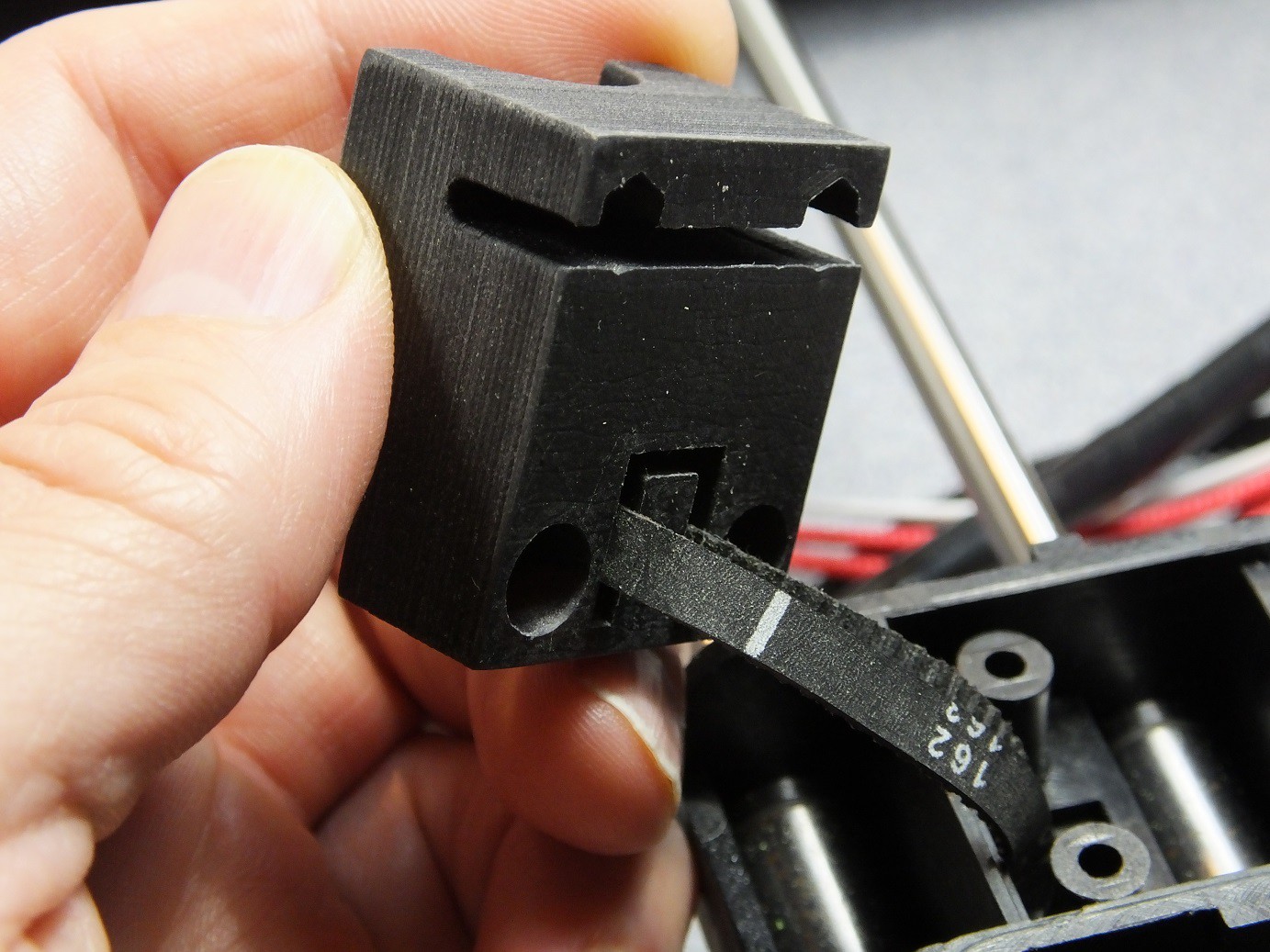 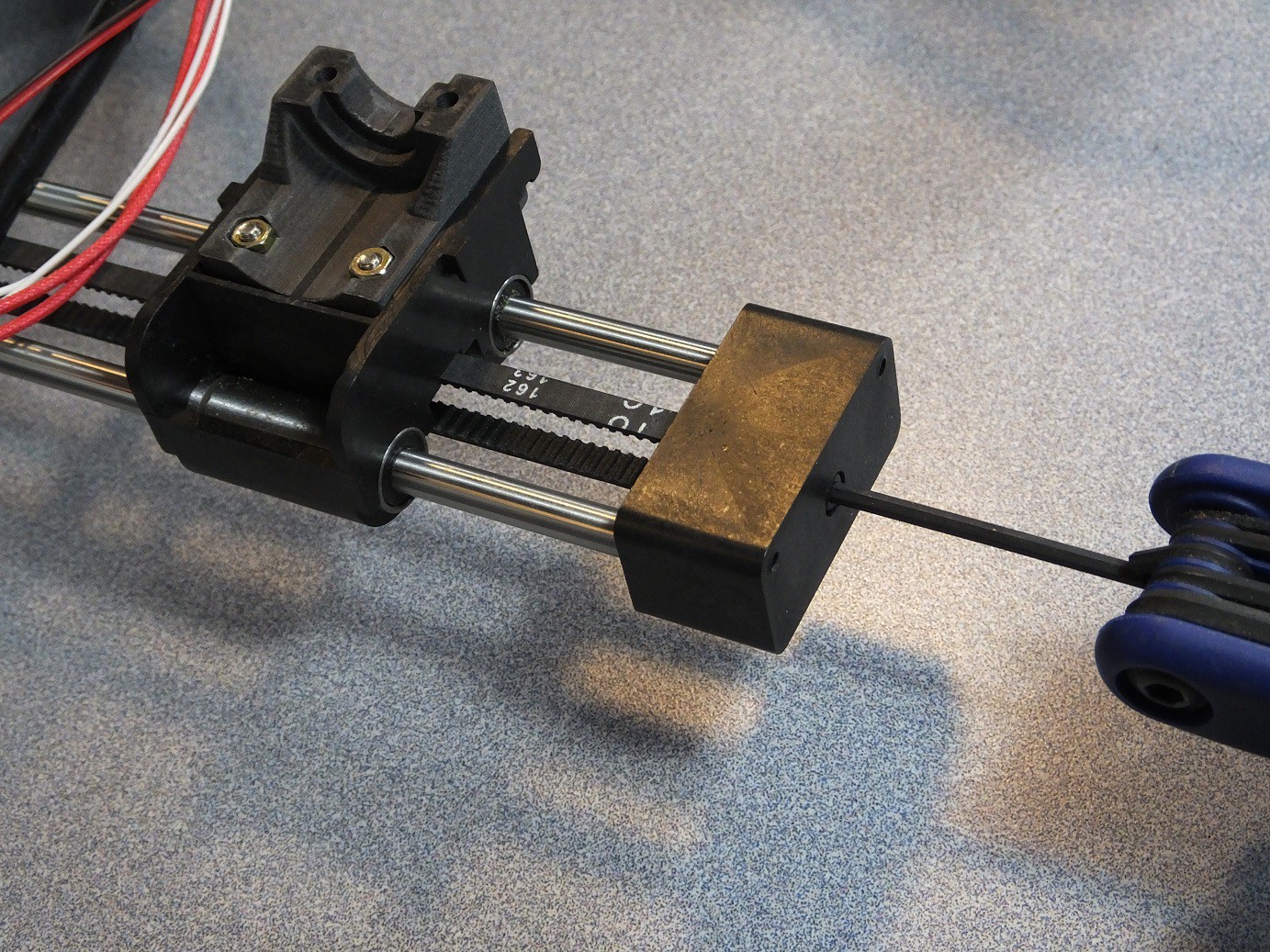 With the mount installed, I then created a fan shroud which would direct cooling air through the heat sink on the E3Dv6 Clone. This shroud design would double as the mounting clamp for the hot end, would have to be designed to maximize the cooling, and direct the exhaust air away from the print, to help prevent ABS warping. A layer fan accessory would attach to this shroud to provide controlled cooling for bridges and where needed. 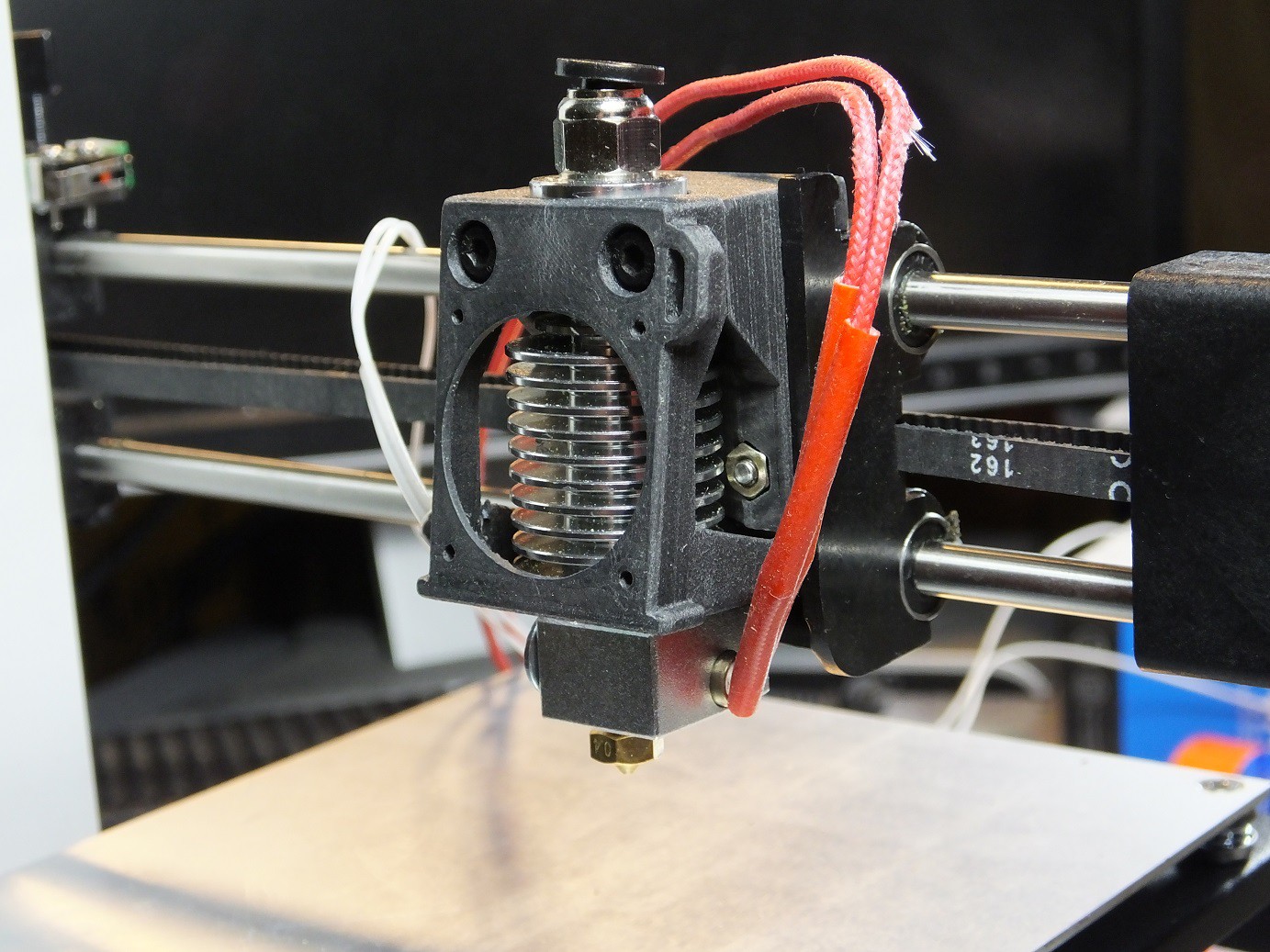 The new mount shown here takes a 30mm fan, from the E3Dv6 clone. The stock heat sink and fan had no problems with filament temperatures up to 270C, so the E3Dv6 clone with the superior heat sink and larger air evacuation ports in the shroud should work just as well. Using a larger fan seems like an unnecessary change at this time. 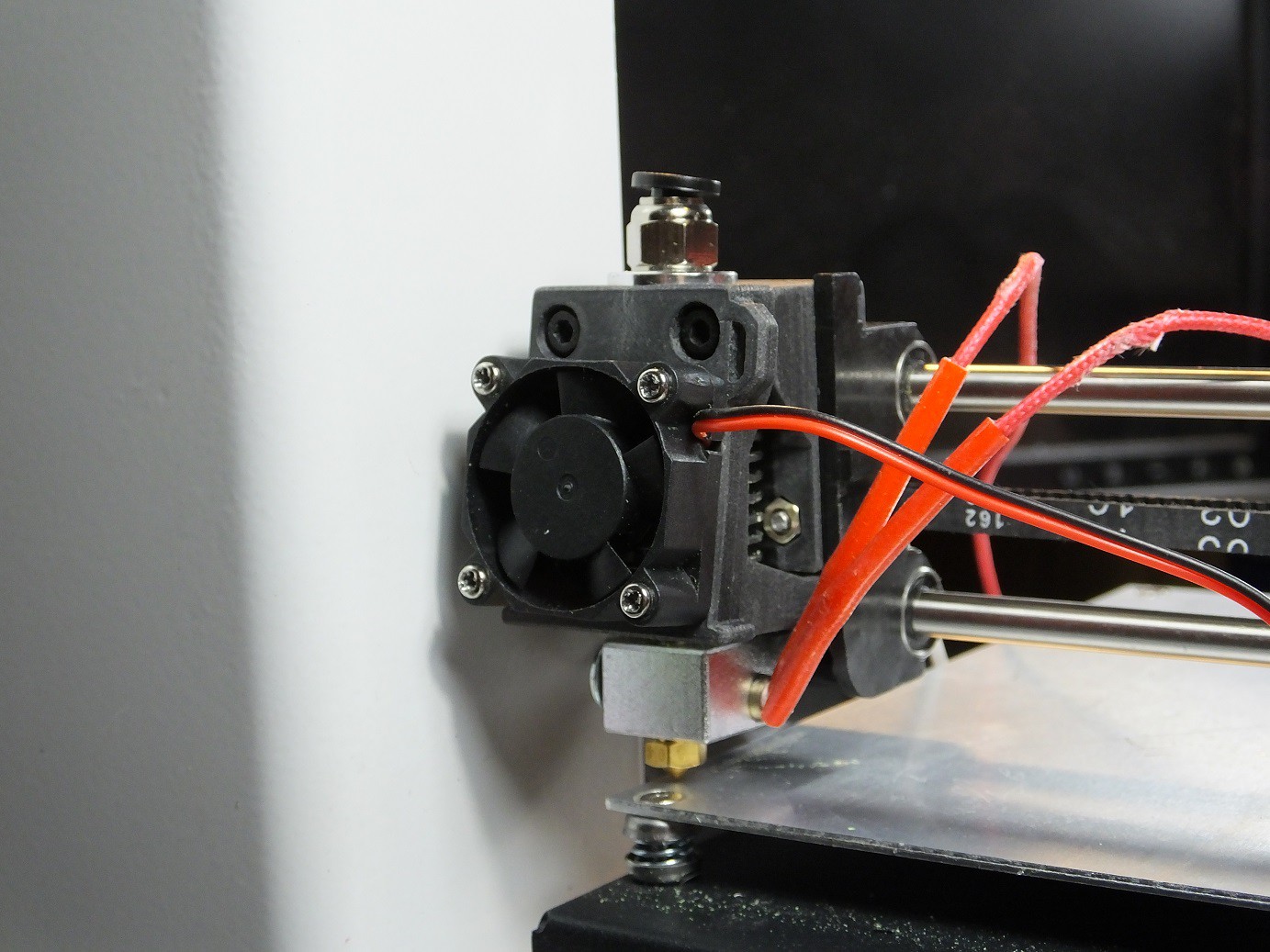 The hot end fan was installed on the shroud, and looks like it will work great. There is still quite a bit of wiring to be done to make this all work, so I have not been able to test it yet. The internals of the printer are still spread out over the table beside the printer. 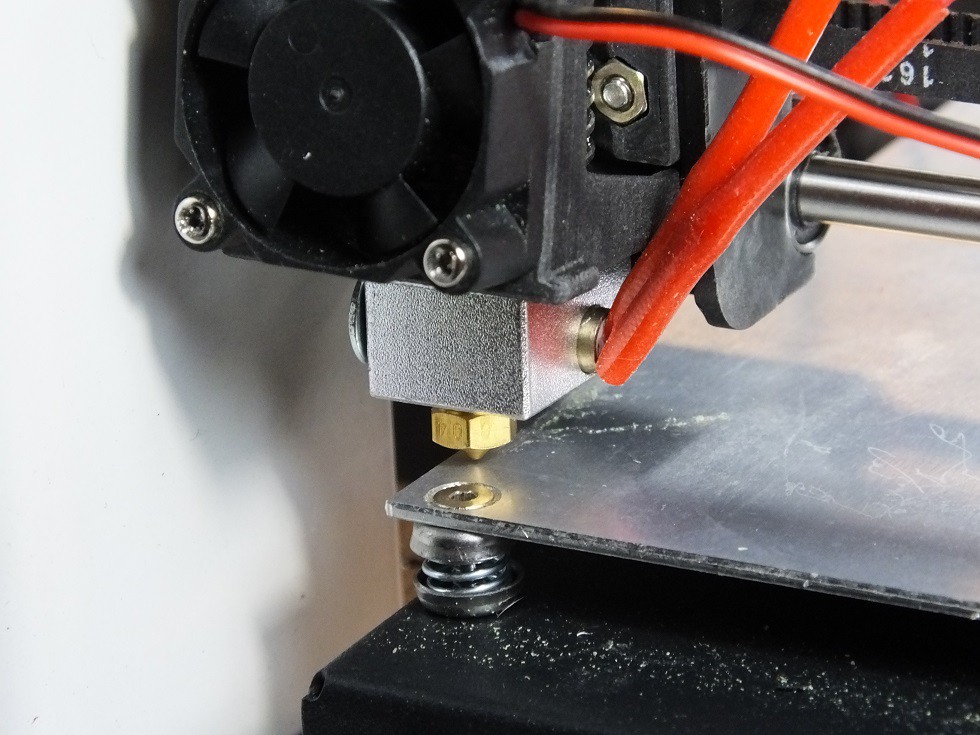 This is the new "Home" position of the new hot end nozzle tip, using this bracket. I estimated the position based on where the limit switches engaged. The bed didn't require any adjustments, and the Y-Axis seems very close to where I recall it was before I began. I should have taken some photos for reference, but I forgot.

Next up is some wiring and electrical modifications!

Daniel, you can import an stl into openscad like this:

The result of that line works the same way as, for example,

providing a usable model you can tweak with all the standard openscad tools.

If you perform this upgrade and require a z offset how do you make it permanent?

I already have a E3D v6 mount for my MPSM but this one not having an offset would be great. Is there a time frame on the files? I plan to print in PLA then plaster cast and make out of aluminum. this will add to the strength and remove and temp issues with melting material.

when you release the files, would you mind releasing a solid model for format as well, I.e., .sat, .x_t, .stp. I'd love to be able to tweak your great design for my specific needs... Specifically, using a v5 hotend. Thanks

I printed this with ABS at first, but I wanted something that matched the glass filled nylon of the original printer components, so I used carbon fiber filled PETG for the one seen in these photos.  I will definitely make the files available shortly, as I need to test this to make sure the plastic near the heater block is protected from melting. I don't know how this hot end behaves yet. I'm still working out the fit of the hex nuts on the back side, because currently they are a tad loose. I also have to see if I need a wire loop on the left side to tie off the thermistor wires. There are some other surprises in store for this piece as well. Thanks for the comment!

Thank you for this! I like that hot end mount. What material? Will you make the files available? My MPSM arrived DOA and I'm waiting for the replacement. This might be the first thing I'll print when it arrives.