About turn again - The Mathematics

After taking a detour (and dragging a couple of others with me) through the realms of ePnP, I’ve done an about turn and gone back to my original idea of using circles and their apparent ellipses for tracking position and attitude. I’ve already implemented most of the steps and I’m reasonably confident that this approach will work, though I still need to see how well it will sit on a 300MHz Cortex M7. Anyway, here’s the approach as it stands at the moment:

At the end of the process you should have something like this which shows a circle constructed from A, B and C: 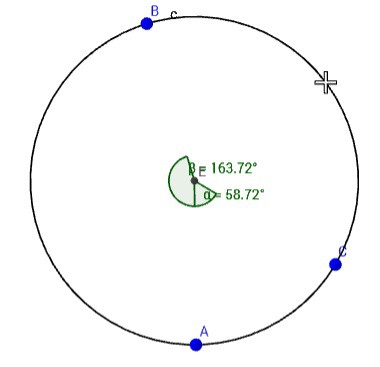 The following equation can be used to determine the length of a chord on an ellipse:

The problem easier due to the fact that, at this stage, there is only the need to match the ratio of the chord lengths with the ratio of the major/minor axis at those angles. This allows the removal of the minor axis as an unknown as well as the root. However, the problem is made more difficult in that the sensor group may be at any theta angle on the ellipse depending on the attitude of the HMD with respect to the base. This has the effect of “sliding” the sensor points around the ellipse as shown below:

This basically boils down to a system of three equations where only R (axis ratio) and S (slide angle) are unknown:

Unfortunately my mathematical skills failed me at this point and I have had to solve this part through iteration. I’m still hopeful that a colleague will take a look at it and come through with a less computationally intensive solution.

Perspective errors in the ellipse can be reduced by taking advantage of the fact that there are actually two “slide” angles in the ellipse which will fit the chords - exactly PI radians apart. Solve for the slide angle in 0<S<PI and also in the PI<S<2PI ranges then average the two sets of results (still to do in the code).

Once solved, this gives a major/minor axis ratio, chord lengths (with the minor axis set to one) and, the “slide” angle at which the chain of chords starts, and we start relating the two sets of figures, circle and ellipse together to figure out the pose:

This is about as far as I have come so far. Through with use of external sensors and the sensor normals it should be possible determine the position and orientation of a base wrt to the HMD. Depending on how much this approach loads the processor I would also like to run this a few times on a few different sensors to reduce errors in the extremes of major/minor axis ratios (<1.5 and >4) where there are more uniform chord length ratios present. It would also allow the attitude to be better fixed by also locking vectors of other circles: 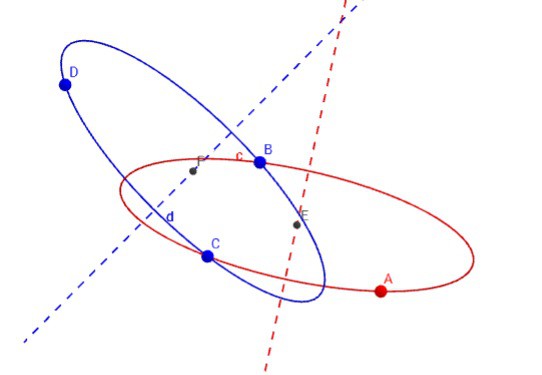 First iteration of a simulator