A dedicated HAB platform with 2-way communications via www.aerospark.co that can be used to experiment low cost space launch technologies.

I am building a High Altitude Balloon payload that has a dedicated two way communication link via the Iridium Satellite network to transmit a custom 350 byte message (i.e. position, altitude, speed, temperature, etc.). The Pi Shield also features 4 separate optoisolated circuits rated up to 24V that can be controlled from the ground through this comm link. I will be using this to heat the payload, ignite a rocket from 100,000 feet, deploy a parachute, and abort the mission at any time if desired.

The ease of using this payload for HAB missions makes it possible to promote STEM education in public schools and give the average hobbyist a fun project without needing an amateur radio licence or a reliable ground station. Instead, users just need to have an internet connection.

The goal is to bring amateur rocketry to the next level, while continuing to improve technologies that promise cheap access to space. 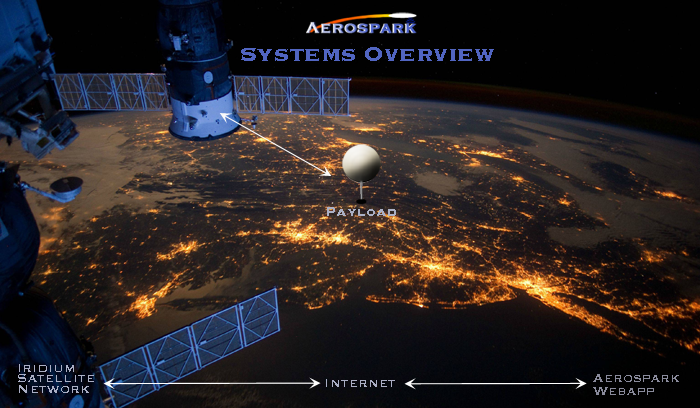 This project was developed to create a new type of high altitude platform with enhanced real-time tracking and control.  It will also be used to launch a rocket from the payload at altitude from the balloon payload (A.K.A. a Rockoon).  The major systems featured in this project are the Payload, the Iridium Satellite Network, and the Aerospark Webapp.

Payload: This contains a Raspberry Pi, RockBLOCK Iridum Unit, Aerospark Pi Shield, Batteries (2x 9V), Camera, and Rocket. One battery charges the Pi/RockBLOCK/Camera, and the other is used for auxiliary power (i.e. payload heating, rocket ignition, cable cutdown, parachute deployment charge, etc.). The RockBLOCK Iridium Unit is plugged into the Raspberry Pi's USB port and allows for communication with the Iridium Satellite network (approximately every 1 minute for up to 350 bytes of data).

Iridium Satellite Network: This is a satellite constellation of (currently) 66 active satellites providing global coverage 24/7 year round. The payload uses the RockBLOCK to connect to this network in order to send/receive data. The satellite network pushes the data to/from ground stations which are available through the internet.

Aerospark WebApp: The website is setup to retrieve any data pushed from the payloads Iridium unit, as well as send data to the Iridium network for the payload to read. This is done through HTTP POST/GET requests to RockBLOCK servers.

Dahlon Lyles wrote 07/25/2014 at 22:13 • point
Just a warning, you need to go through the FAA to get clearance to do any launches. I'm currently working with a group of students at Purdue University to accomplish a more powerful version of this and you have to go through a lot of red tape to avoid huge fines and other terrible things. Check out our website - aerospace.purdueamet.org

aerospark wrote 06/26/2014 at 15:18 • point
Thanks Adam. Solid motors should theoretically ignite without any oxygen because they have their own oxidizer built into the fuel. You are right about the temperature, and the reduced pressure is also a big concern. I have a very simple idea for working around this and will be testing it out sometime in July on the first launch :).

Adam Fabio wrote 06/26/2014 at 05:55 • point
Great entry Aerospark! Does the reduced oxygen and temperature at higher altitudes create any problems for igniting and running solid rocket motors? I'd imagine you're using something more robust than the old Estes igniters I had as a kid. Thanks for submitting your launching platform to The Hackaday Prize!

The 2016 Hackaday Prize
Design for compact cluster and case that can be used for housing up to 5x Raspberry Pi2, Pi3 or Odroid XU4 (SoC) computer nodes.
Project Owner Contributor

The 2016 Hackaday Prize
Qubie is a small wireless device that measures waiting time at a polling place for the benefit of both election jurisdictions and citizens.
Project Owner Contributor