I was recently given an old All-In-One kiosk PC. The case had a Windows 95 sticker on it, but the LCD is irreparably heat-damaged and the HDD is dead. Googling the model number found nothing, so I pulled the whole thing apart immediately and found an AMD 5K86-P90 CPU.

I've been looking for a DOS/Win95 computer since my last Pentium died from overclocking. All I have to do is rebuild this one!

A quick breakdown of the device.

It is an early All-In-One PC, built with the LCD in the chassis and organized to be as compact as possible. 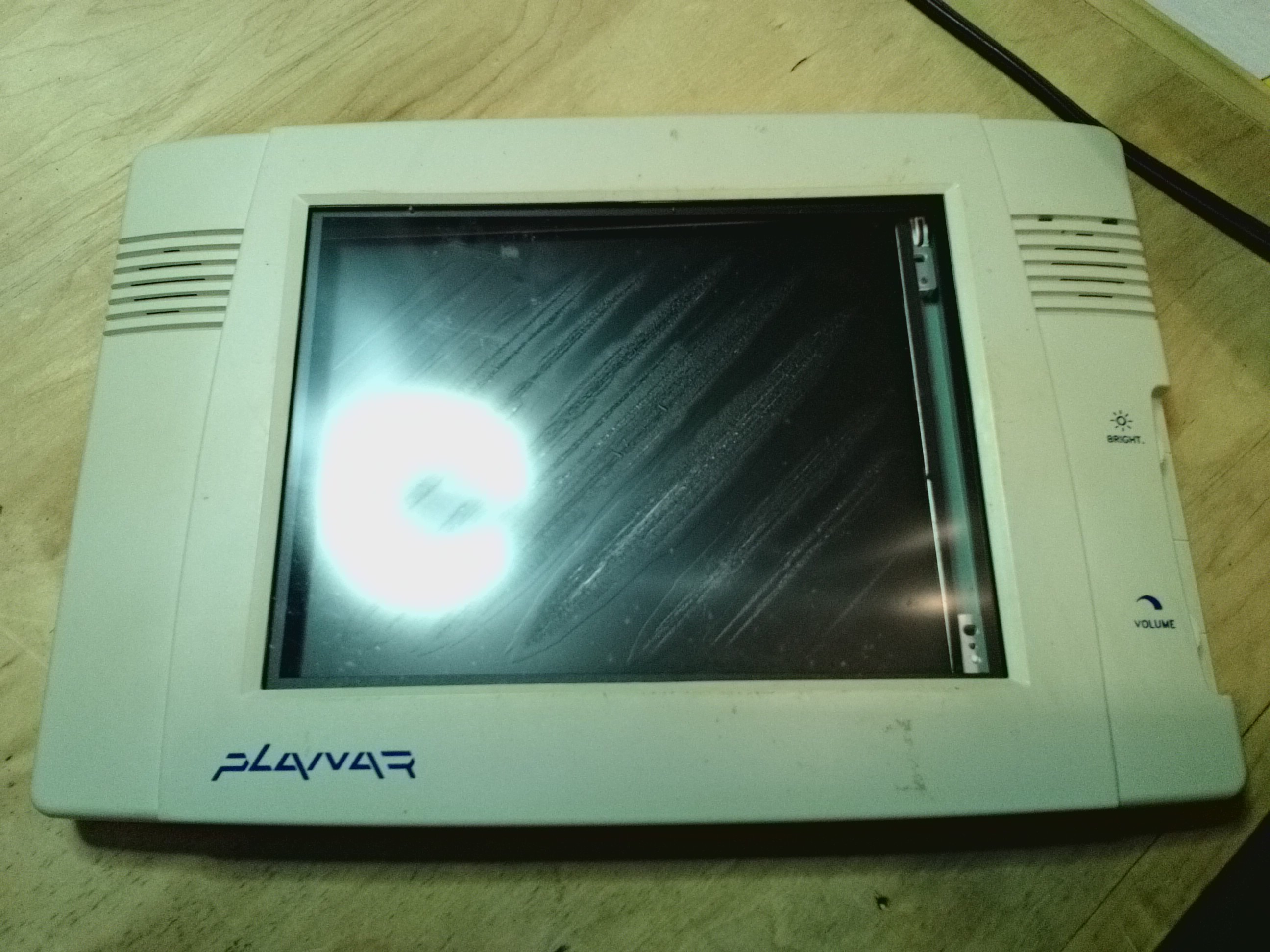 Google gives me nothing useful from the model number, so I assume this was a pretty obscure computer. The serial number makes me think this was the first unit of a very, very small run of custom units, but that's just a guess. Regardless, I haven't found any documentation on it. 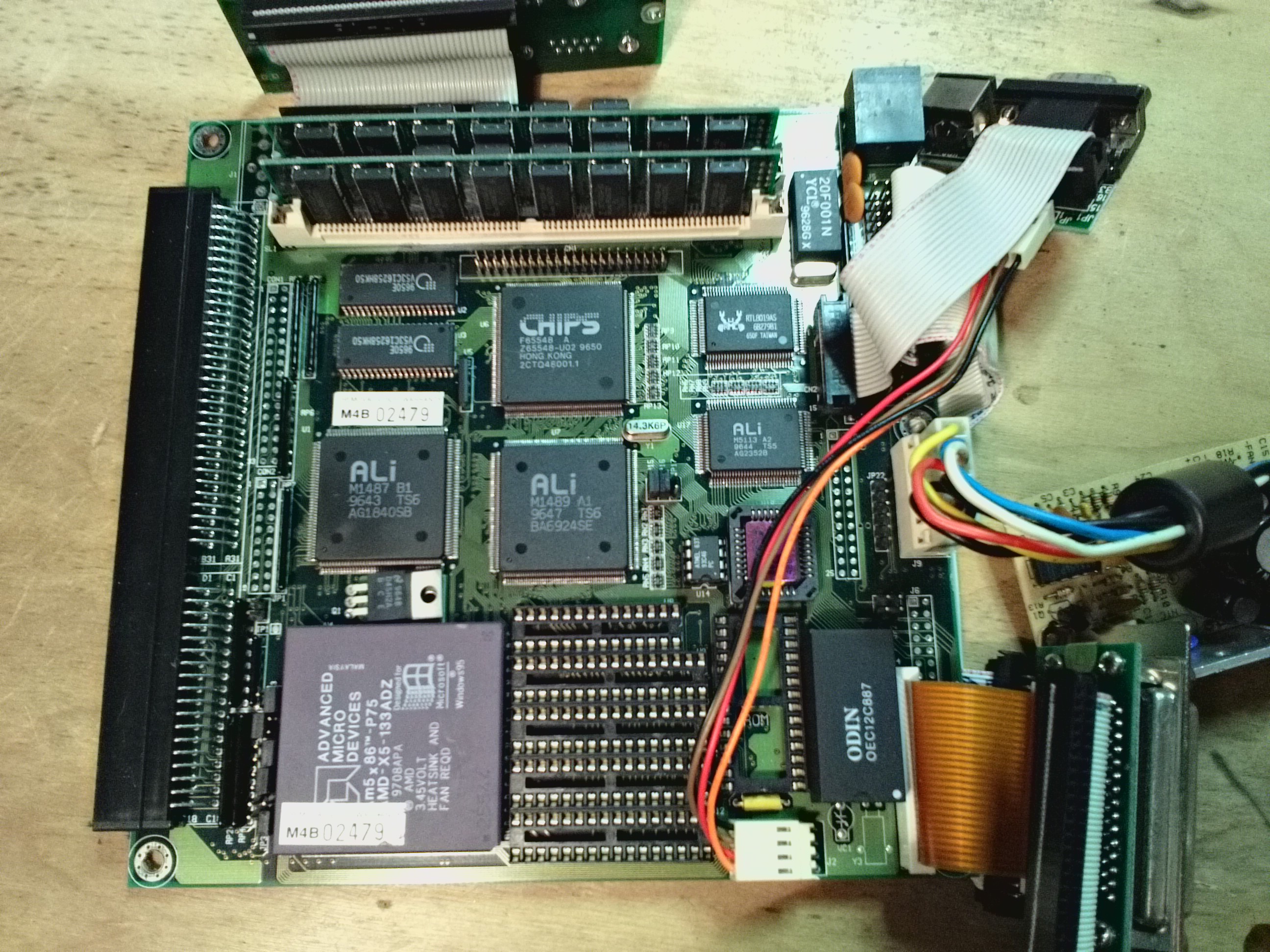 The motherboard is what's really exciting. It suits my desires perfectly! It's small, rectangular for easy mounting/enclosing, and the PSU is a separate module. Let's go over the different sections, from the top. 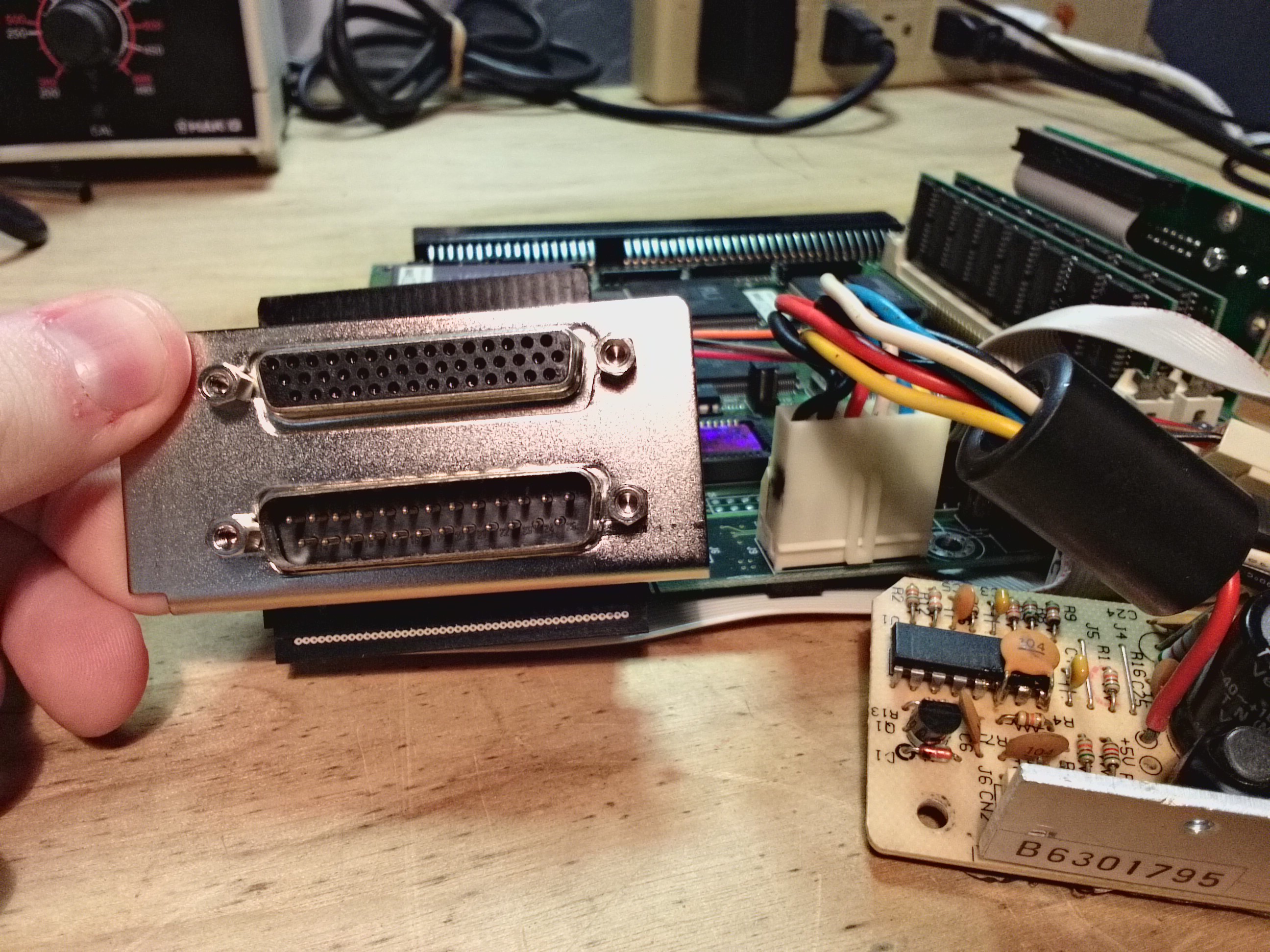 On the left edge of the motherboard is a single ISA slot, I assume. Inserted in this slot was the most unusual ISA peripheral I have ever seen. 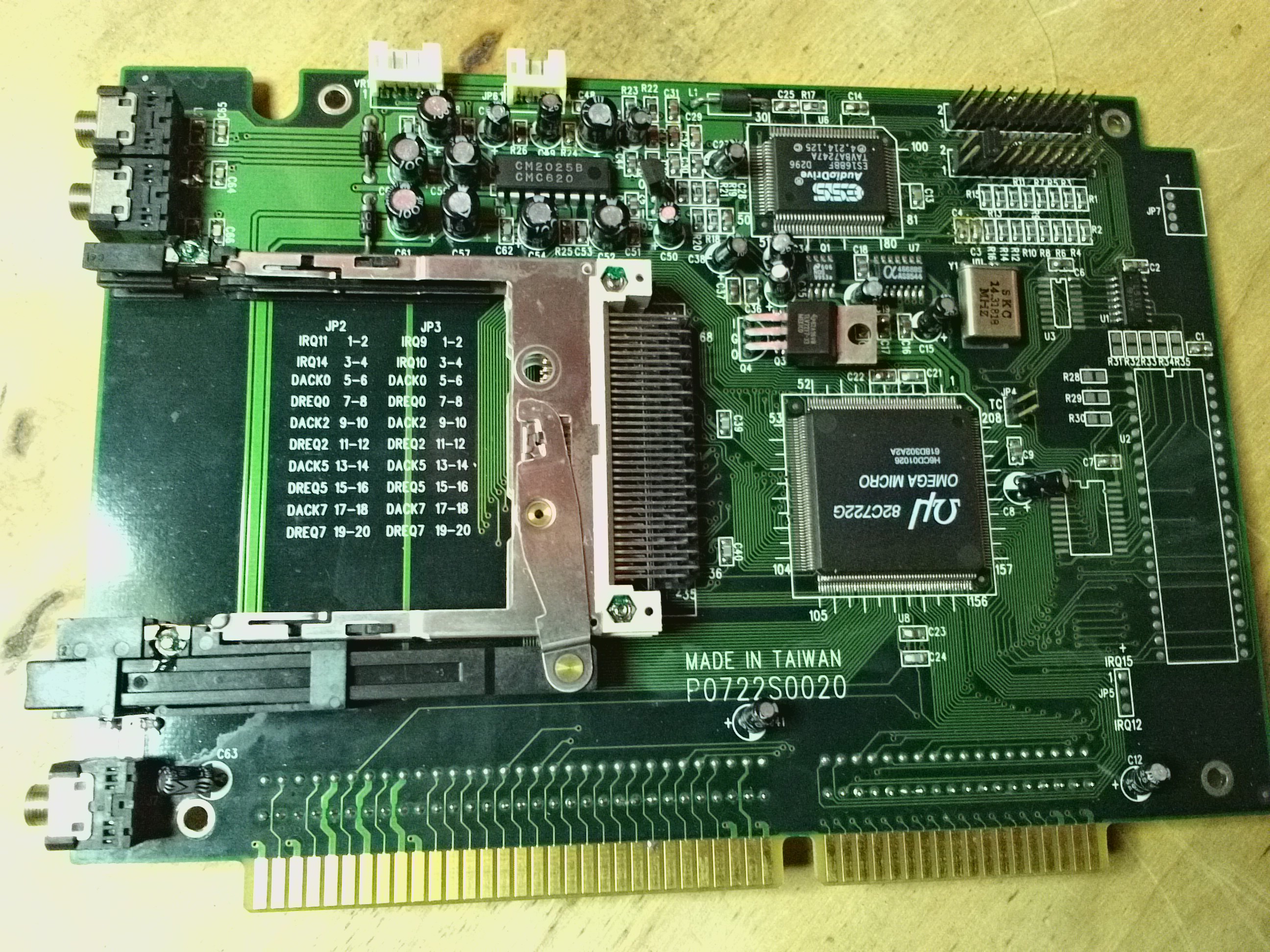 It appears to be a combination of every peripheral that wouldn't fit on the motherboard, including a PMCIA host and audio card. The unpopulated ICs and connectors don't give me much to go on, but I'm guessing they are for a dial-up modem. One of the white connectors along the top was hooked to a volume control dial mounted on the chassis. The other white connector was hooked to two dials, controlling brightness and contrast of the LCD.

Speaking of the LCD, it's trash. As you might have noticed in the first image, the polarizing layer has wrinkled up. It connects tot he motherboard via a fine-pitch ribbon cable, very much like a laptop. I doubt I could find a compatible replacement, but research suggests that I could pull the polarizing filter off another LCD and attach it to this one. It's a tricky process, though, with a high risk of failure. I'm not even sure it'd be worth it. The wrinkling is ugly, but the LCD works fine otherwise. There's also a VGA connector, and I have a massive stockpile of VGA LCDs.

So what's the plan?

Did you ever get any farther on this project?  I was just given a very similar one - same brand, model C2000D - and was thinking about how to create adapters to plug into the external floppy and ide ports.

Also, does the board on yours have a BIOS battery?  Mine seems to be dead, but I can't find the dang thing on the board!

In college I briefly messed with streaming stylus positions and presses over wifi from a Compaq TC1100. It worked, but I ran into issues getting the host PC to take the values as being from a graphics tablet. Modern drivers are a pain.

Low-level-learnability is a big factor for me. I spent 5 years in college majoring in Computer Engineering, but I ended up learning more about databases and software design than actual hardware. From the couple classes I took I've been building upon with my own CPU design (https://github.com/stevengann/sg16)  but I still feel a major gap in my knowledge.

Glad to see I'm not the only one still keeping around (and alive) old beasts like these. Mine was a 486 pen-tablet which now has a 4GB "SSD" (compact-flash). So modern! Had some fun with QBasic on it, too, just a couple years ago.

Maybe it's nostalgia, but I find the MS-DOS/Win95 era of computers to be the most functional and solidly built of vintage computing. Ever since my Pentium build started dying, I've been looking for a replacement. What I really wanted was something like a Raspberry Pi but could run Win95. DOS-Box is slow and VMs lack the feel of real hardware. This little PC fits my needs perfectly.

A 486 tablet? I'd love more information on that. I have a stack of HP Compaq TC1100's, the oldest tablets I've ever found, but they are restricted to XP to Win7 (haven't tried Win10 yet). Tried getting Linux on one, but Ubuntu and Lubuntu were agonizingly slow, and Arch kept crashing.

Toshiba T200CS. Maybe I should document the work that went into that upgrade, as it wasn't particularly easy... Came with Win3.1, moved up to 98SE. But more fun was running DOS and a small QBasic program to read the pen-coordinates directly from its (internal) serial port, and spit out a Wacom-compatible signal on its external serial-port for my desktop.  I did think about loading up the old version of Slackware I learned on my old 486SX25 (I still have the CDs!), but haven't, yet. Don't remember ever thinking that was particularly slow. *Almost* thought about seeing if I could build Android for it, for shits-n-giggles.

For me, it's the hackery/low-level-learnability side of that era, and prior, that seems a lot more accessible than these newfangled things... ISA, parallel ports, etc... Accessing I/O addresses directly. So much can be learnt from that experience. Don't get me started on a big'ol' rant involving ISA->PCI, 486/Pentium->the "bridge-chip" era, SDRAM->DDR, Parallel-Ports->USB, etc. ;)

That ISA card is a trip, BTW.

Will be cool to see this one progress!

It's an idealized DOS gaming rig, but instead of sporting the cool, retro, beige case, it fits well alongside a PS4 or a new TV.
Project Owner Contributor

About a year ago i figured out the connections to put an ipad mini retina screen onto an oculus rift, this is our story.
Project Owner Contributor