While I'm waiting for motor parts to arrive, I should make some progress on the rest of the repairs. The easiest is the gun repaint, which also gives me the chance to document the gun housing build.

Looking down in to the head, there's a strap that's screwed in place with one silver and one black screw: 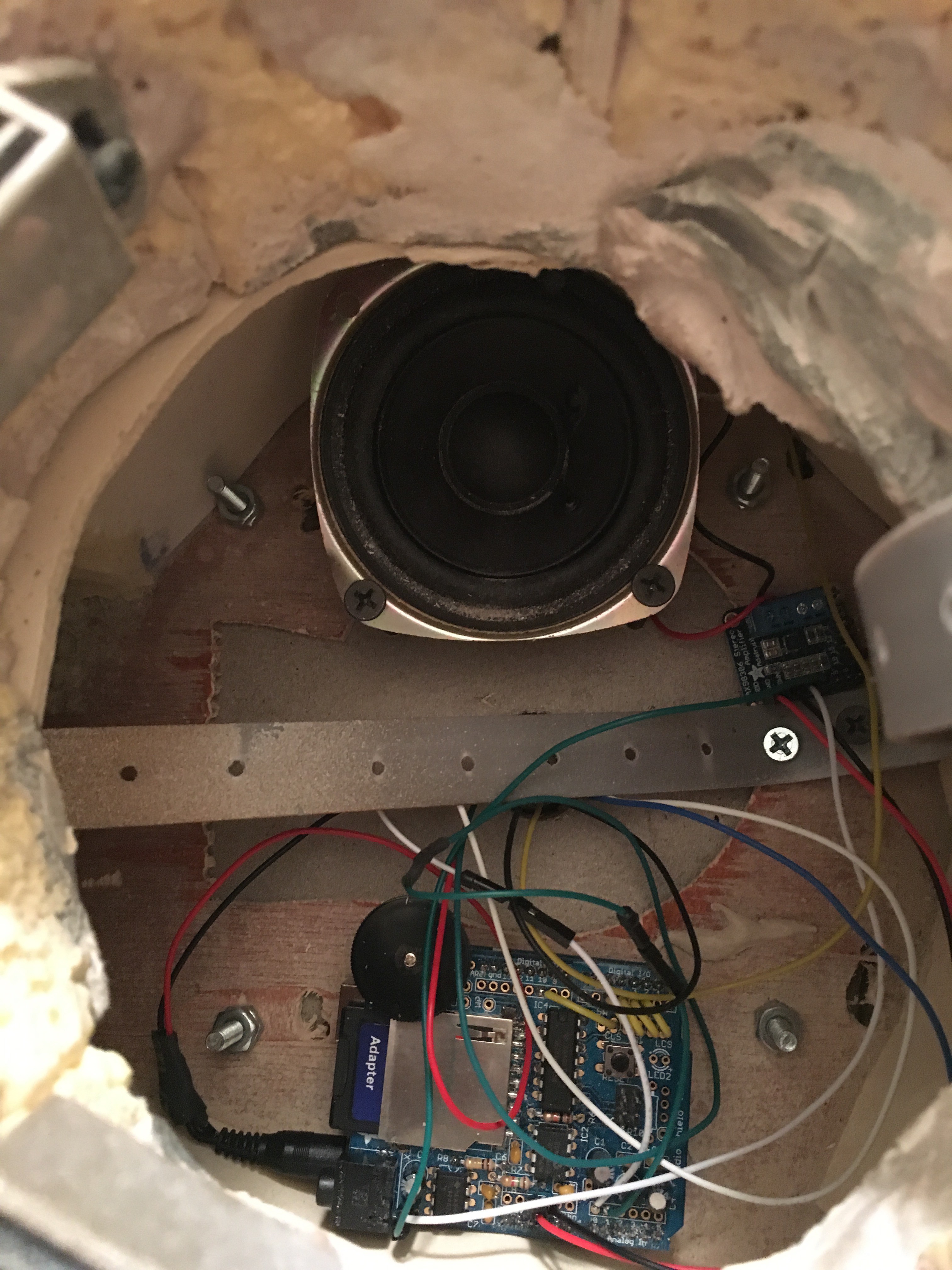 Unscrew them both, and this slides off the front: 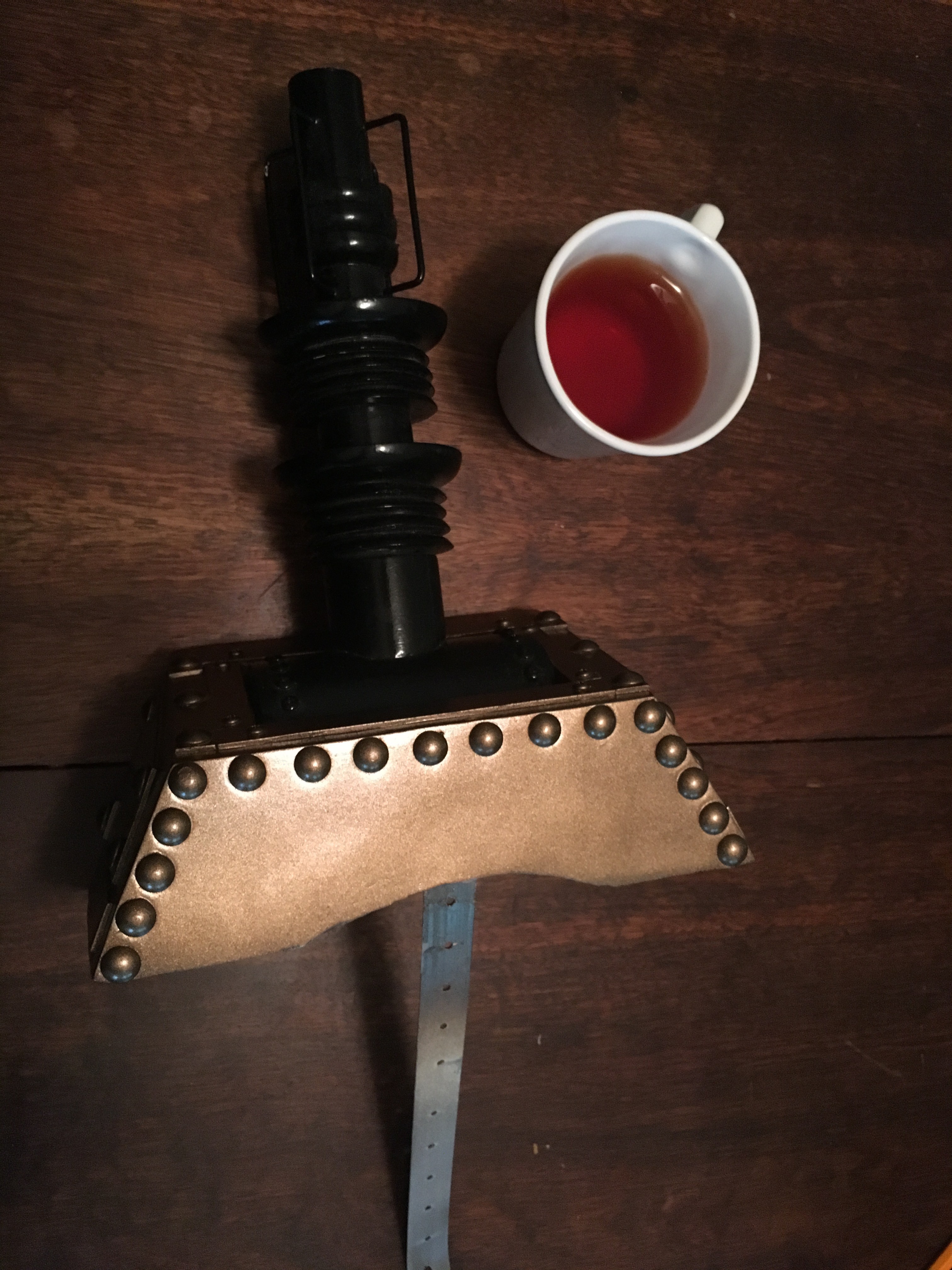 The gun box is made out of thin plywood, balsa wood, bondo, fiberglass, and upholstery tacks.

I templated the box with card stock; cut 1/8" plywood for the box itself; attached the parts using superglue (to tack them in temporarily) and then fiberglass (for the permanent attachment). Filled with bondo (both on the face and inside) and sanded (a lot); cut balsa wood pieces for bits of detail (front and sides); added upholstery tacks (and a few screws as appropriate) for detail; primed, painted, and gloss coated (about two coats of paint and three coats of gloss).

There are a couple details that aren't obvious from that description. 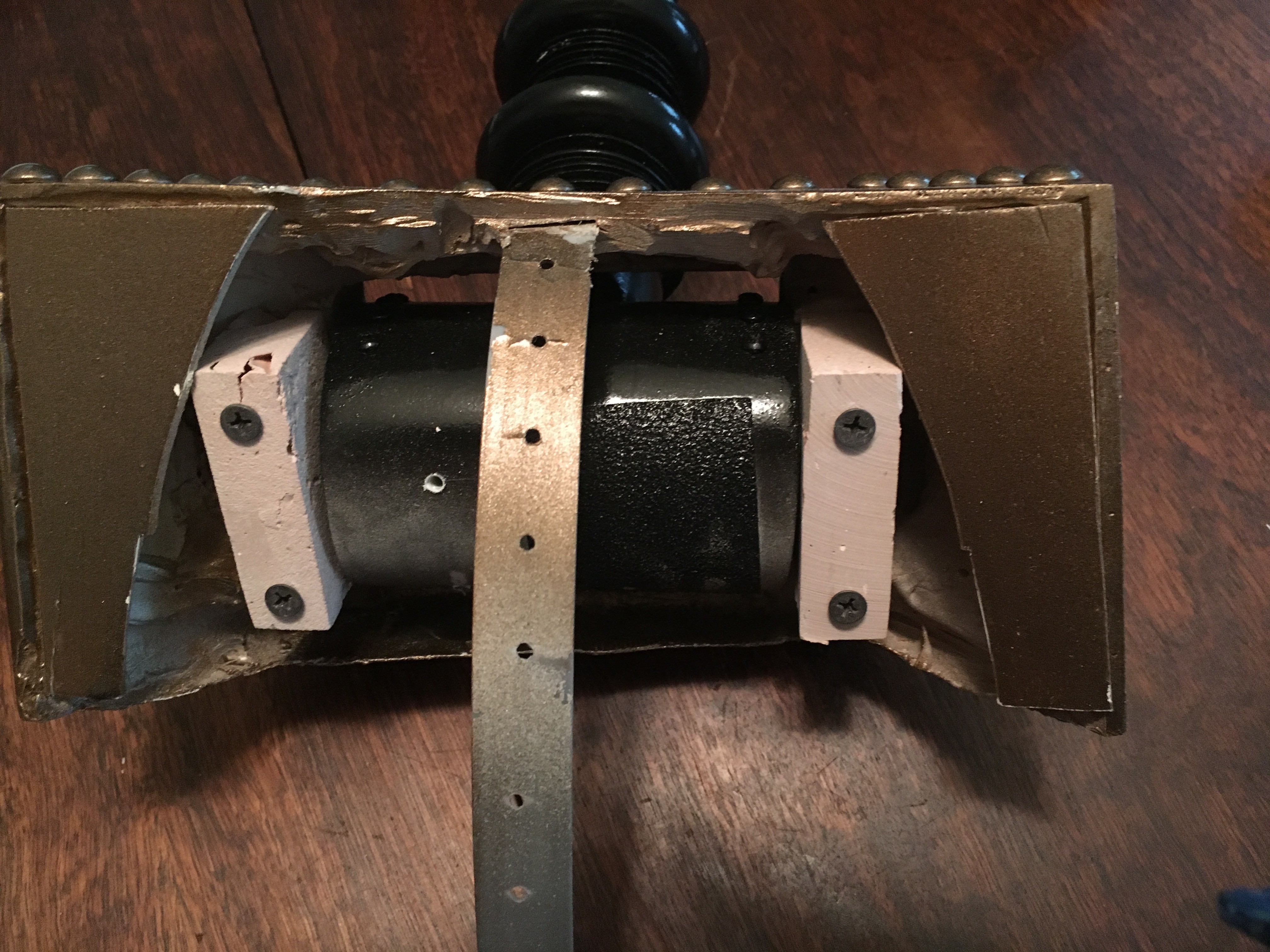 First, the plumber's strap. I superglued it in to the top inside before filling with bondo. That's the large mass inside the top. The goal was to have it distribute the load from the strap so that it doesn't pop off.

Second, there's a lip on the bottom which is fiberglass. That slides under a piece of wood on the front of the Dalek.

Third, the large blocks with the screws. These are the mounts for the gun. I cast them out of bondo and then drilled holes; cut them in half, and then mounted the front halves inside the gun box with more bondo. This gives me a removable mount for the gun barrel. 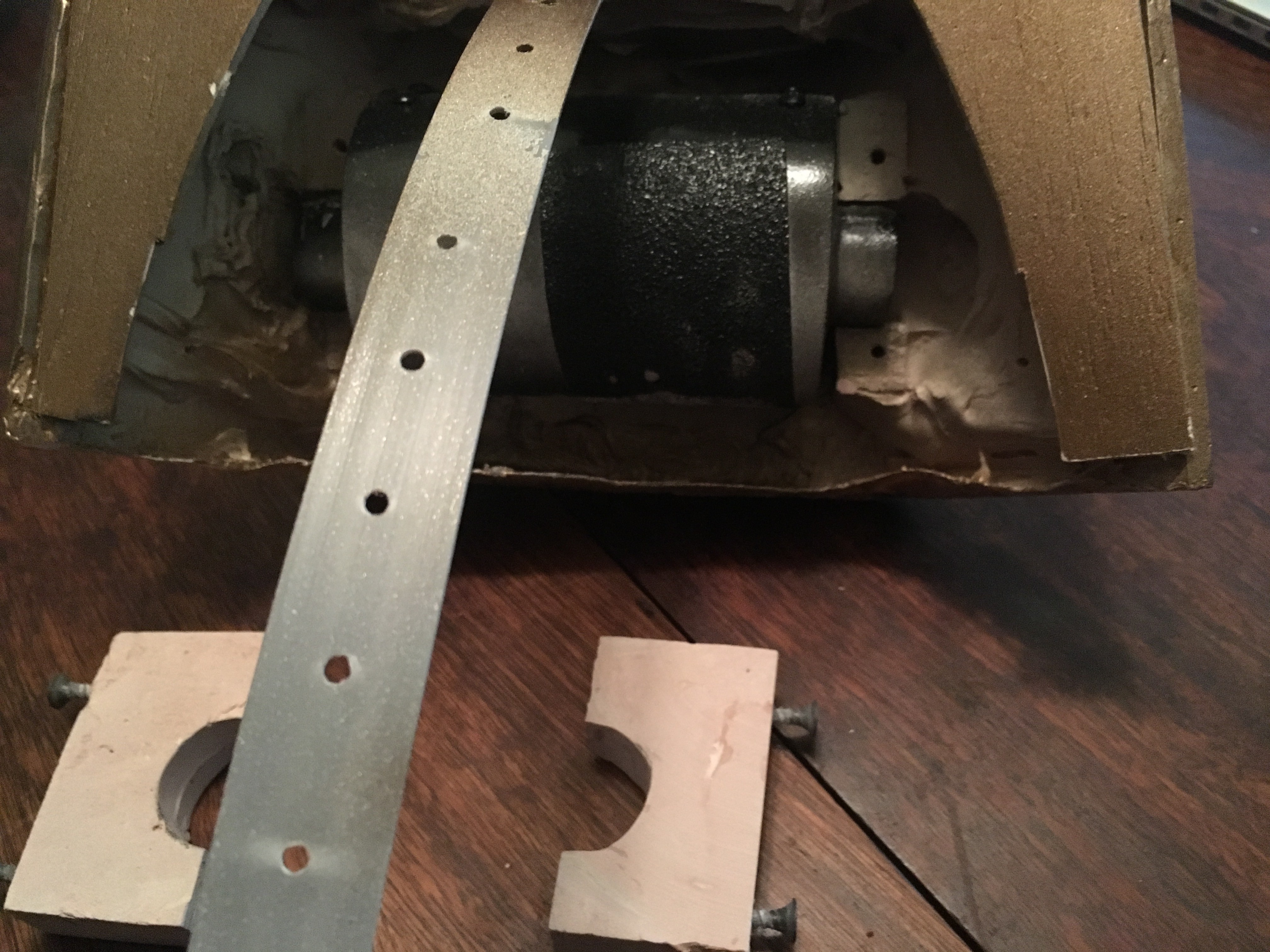 So, why am I repainting? Because of chips in the paint like this one: 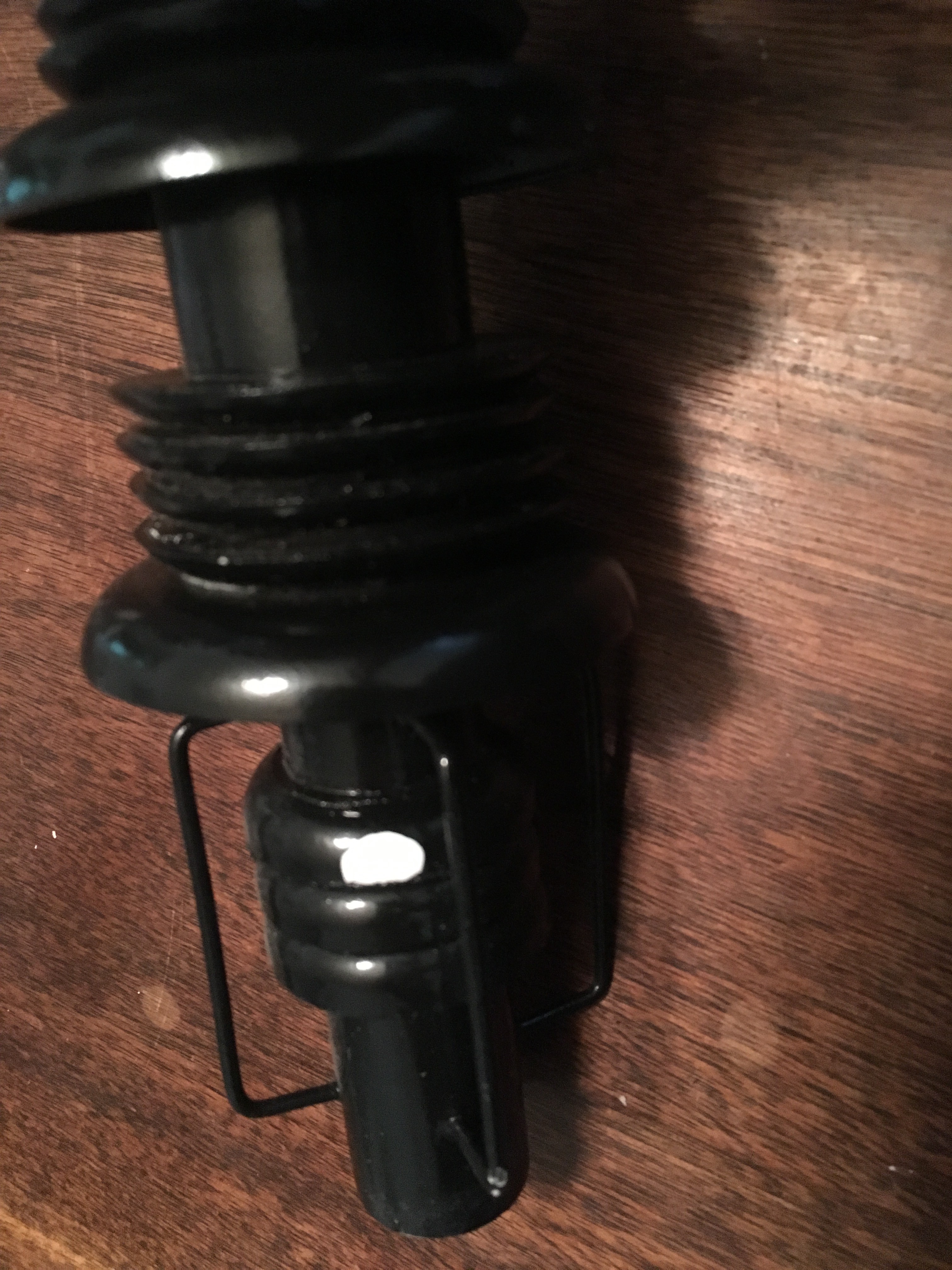 It's not much damage, but there are a few places where that's happened. This is obviously because the gun stalk is likely to smack in to things - but less obviously because that piece is somewhat flexible. While the gun stalk itself is made from PVC (as is the barrel in the back on which it pivots) the detail round pieces are various sorts of materials. Furniture coasters (that you put under them so the furniture slides on the floor), filled with bondo; plumbing covers (that hide the point where the pipes go in to the wall); four pieces of wire hangar, bent to shape; and the three pieces where the paint chipped off are parts of vitamin bottles that happened to have curve I wanted. So yeah, those three are substantially more flimsy than the rest of the build, and the flex makes them more likely to have the paint chip off. Ah well.

Back to the rework: I'm thinking about wiring a light up inside the gun (and maybe some more surprises), so I drilled a new hole in the back of the barrel. There's now reasonably clear passage from the front to the back. This also gave me a way to mount the gun for repainting - this is a 3" drywall screw on a piece of plywood. 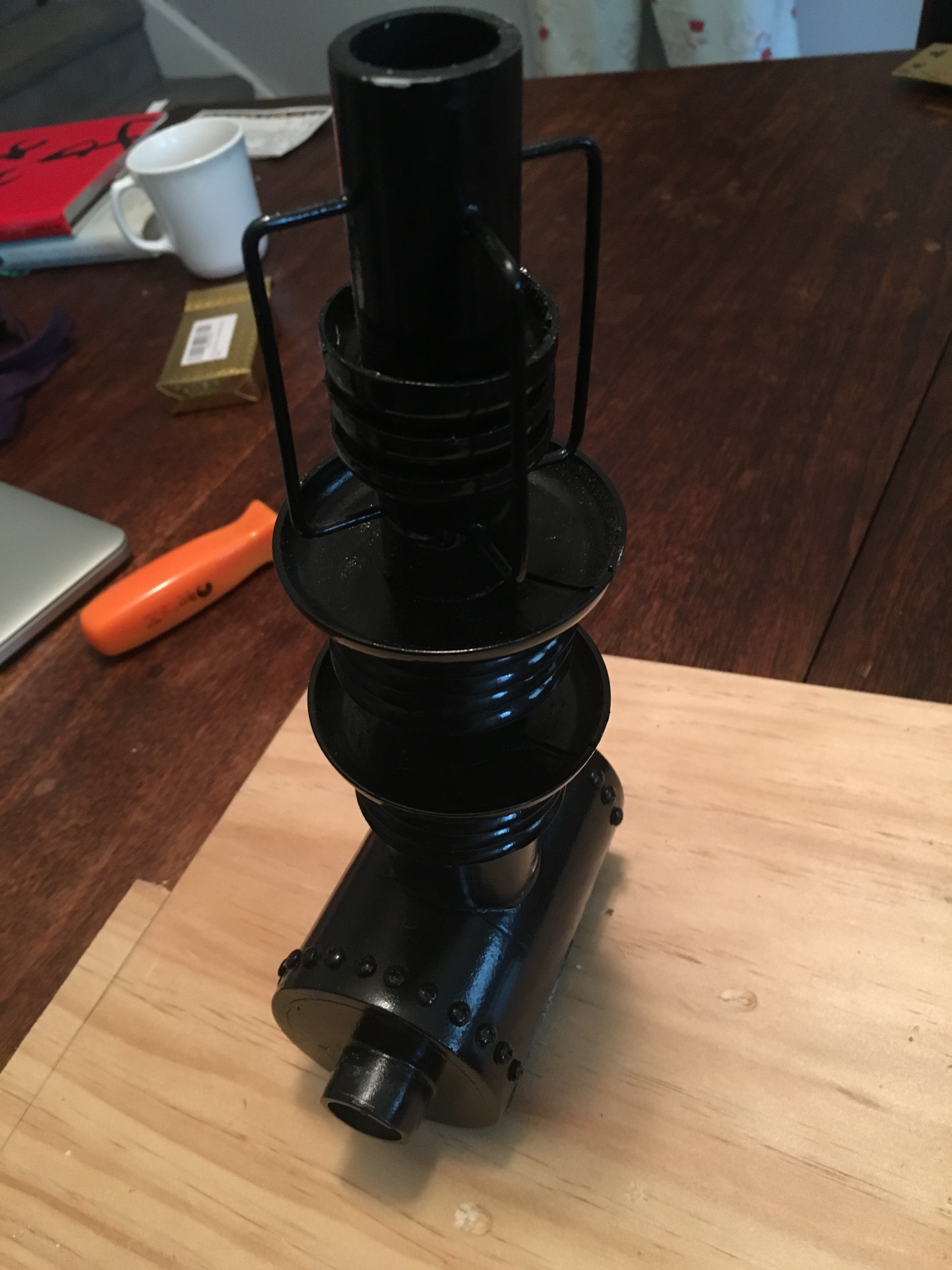 I did a quick sand of the problem areas with 150 grit sandpaper, and here we are after a new coat of black... After a half hour, I put on a second coat of black. At which point it started raining, so I guess I'm not putting on the three layers of clear coat today...