Unmount the motors, finding out that one of the two set screws on one of the wheels had sheared off. 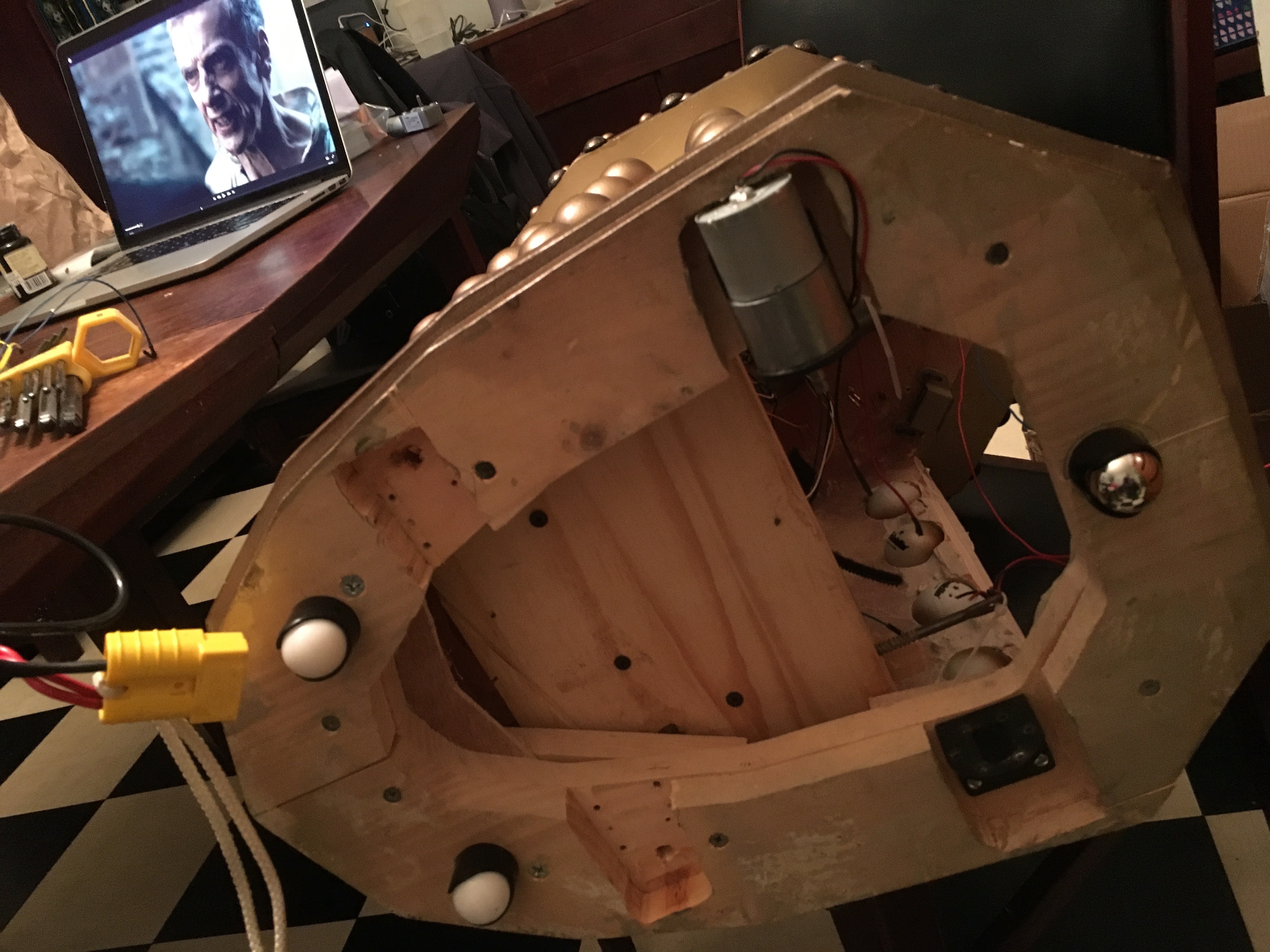 Remove the electronics, since we're going to be rebuilding the entire power system. 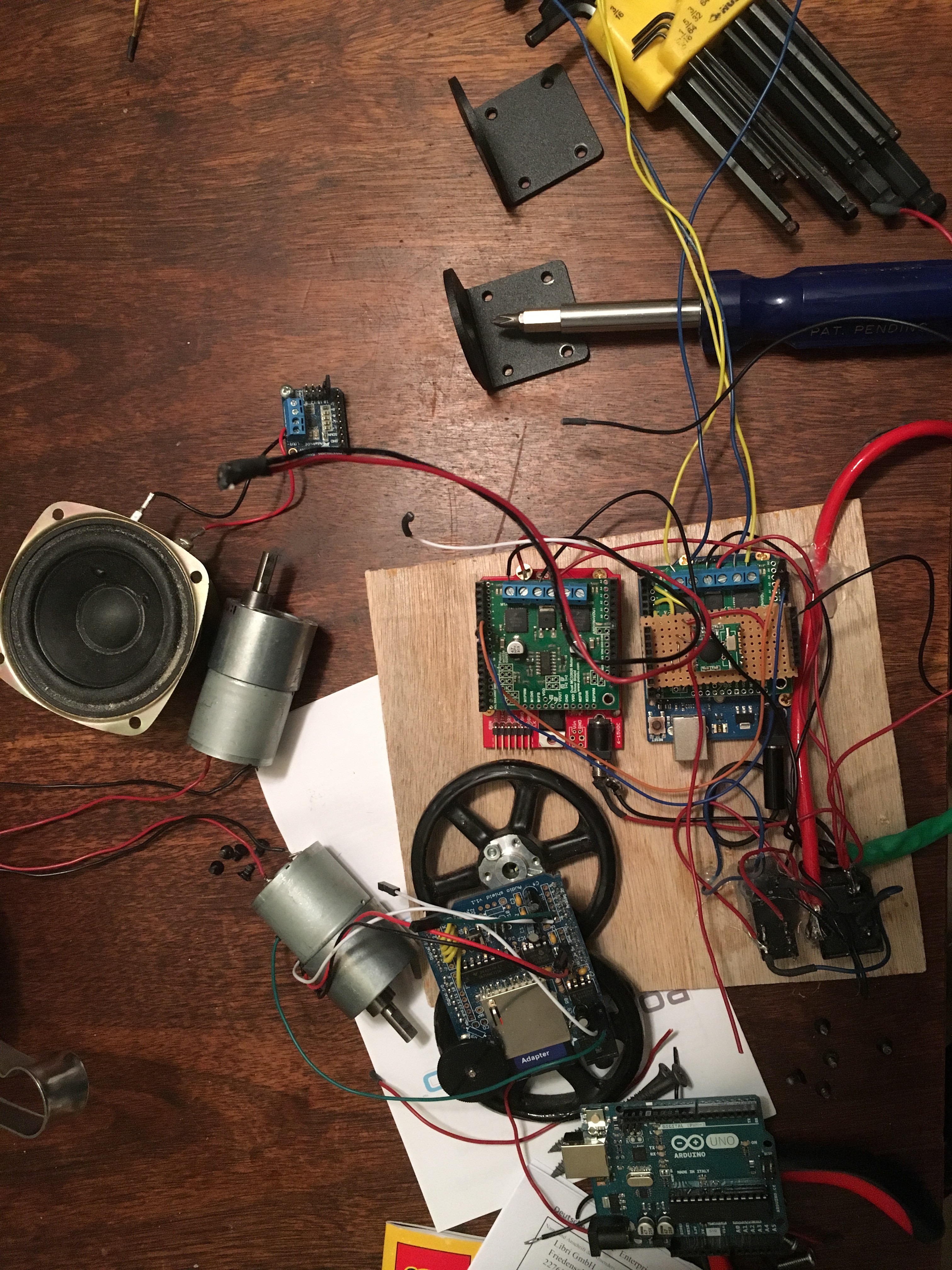 Draw up a new draft block diagram of how this might all work together... 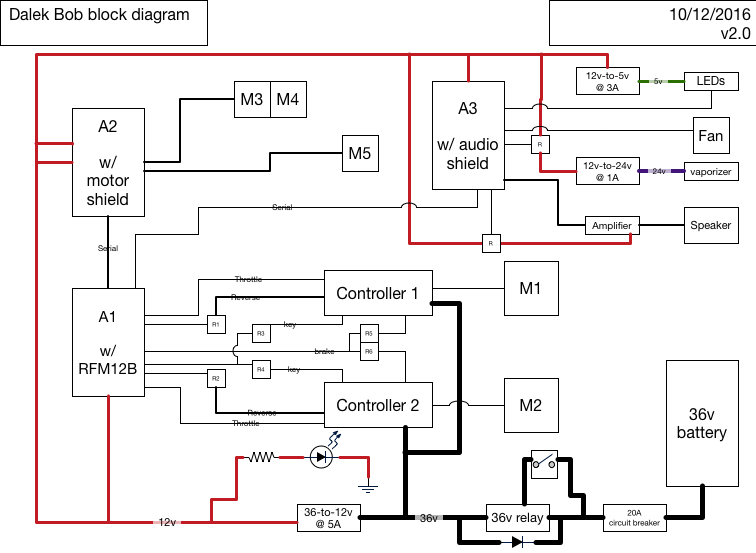 Worry that there's no way you're going to fit all this back on the original circuit board carrier (all of these electronics would have to fit on that one piece of wood)... 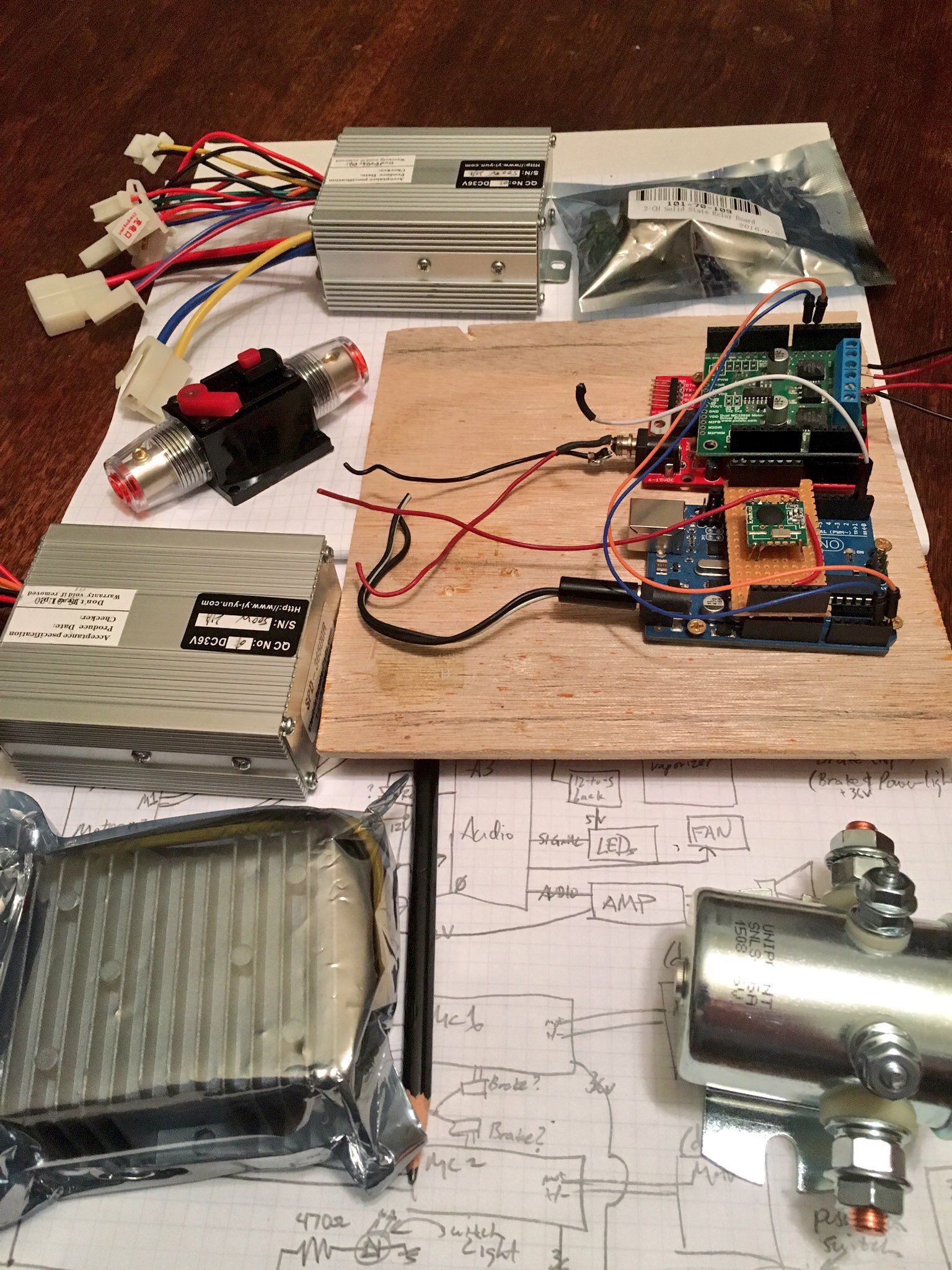 Set aside that worry for a moment (clearly something will have to be done!) and think about the connectors to the two motor controllers... 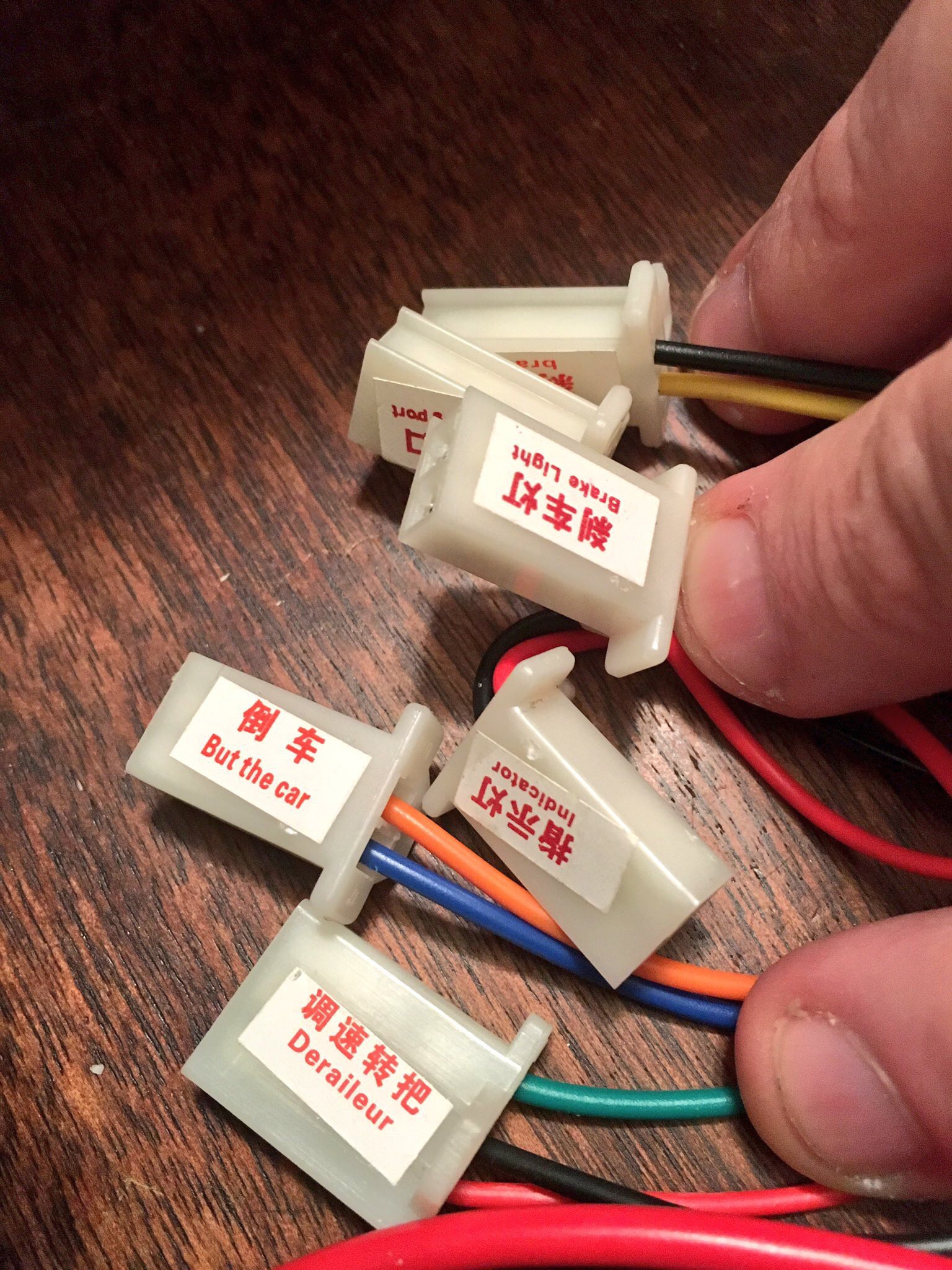 Hmm. "But the car." Does not inspire confidence. At least "Deraileur" makes a *little* sense - this is an e-Bike controller, and that may be the throttle. From process of elimination, I think "But the car" means "reverse".

So it's finally time to start tearing apart the hoverboard. 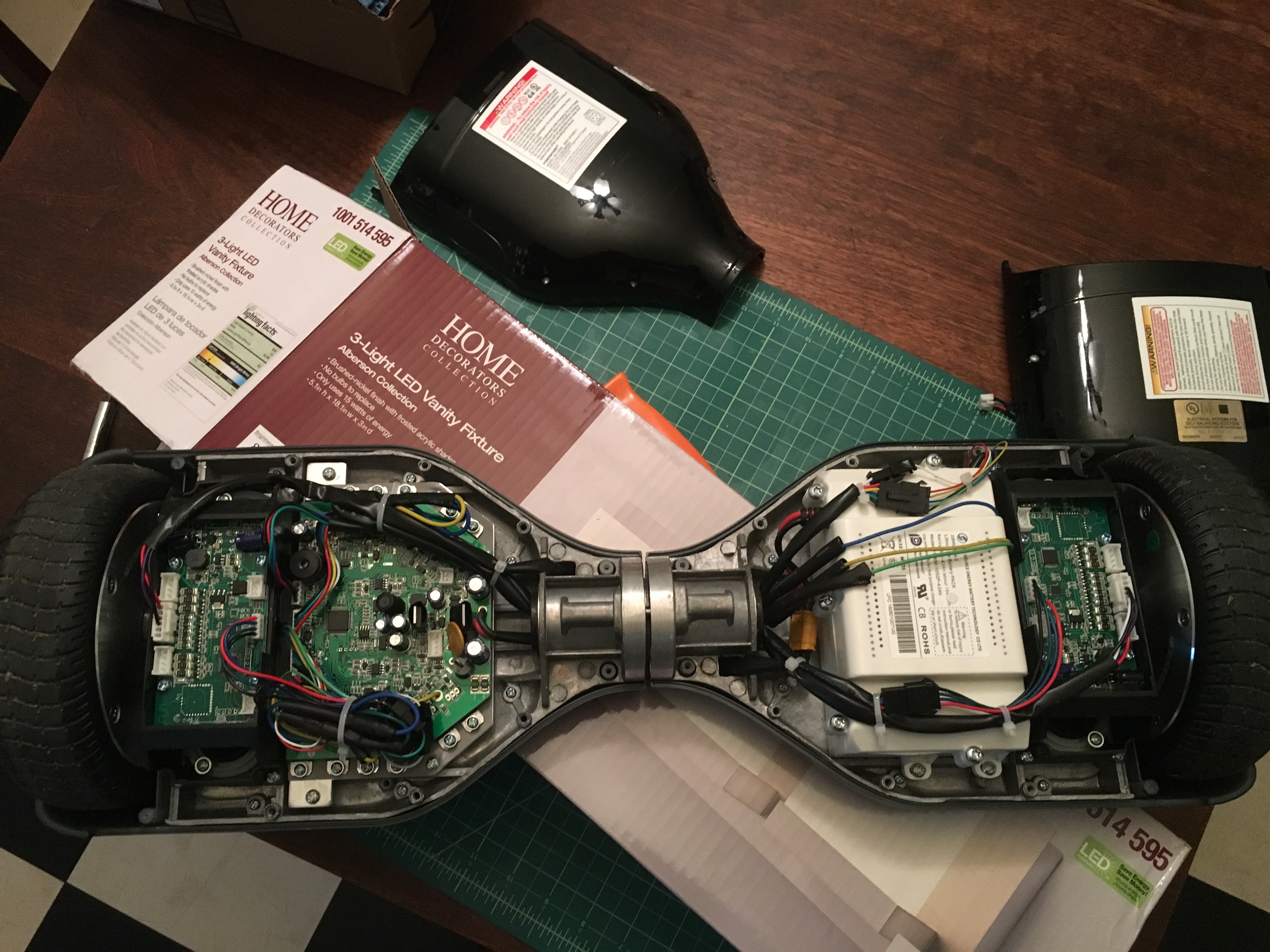 And it's right about here that it hits me: the reversible DC "brushless" controllers that I bought are *actually brushed* and these motors are *3-phase brushless*. So, useless.

Well, I've got some fallback controllers that are 3-phase, but not reversible. I suppose I could start with them. The wiring isn't as well documented (hard to believe, eh?) - I've got the 3 motor wires, a "speed signal" wire, three "throttle" wires, the 5 hall sensor wires, a "brake-low" pair, a single "Brake-high" wire, two "self-study" wires and a three-connector "power" harness.

So: disassemble the hoverboard enough to take out the battery; cut out the wire that used to connect it to the motherboard; solder that in to the 36v-to-12v buck converter, along with the power lines of the (new, hopefully temporary, non-reversible) controller.

The smaller of the three power wires is, I assume, a key. So that gets soldered right in for now.

The three motor wires are easy. The five hall sensor lines (3 sensors, a ground, and a +5v) are also easy.

At which point I'm left with some puzzles. What is this extra lone white wire going to the motor? How does this speed control work on the controller?

I'll spare you the suspense. Don't connect the arduino to the "speed signal" wire. That appears to be +36v *out*, and fried an Uno and its RFM12B. Drat.

My second guess was that the "throttle" wires were ground / signal / +5v, where you drove the signal somewhere between the two to get the speed you want. I threw the center pin on a PWM output on the Arduino, got the RFM12B working again, and lo and behold:

Note that this shakes pretty badly at slow speeds. I assume this is the square wave PWM being interpreted poorly by the controller. A quick RC filter didn't help much (but did limit the top speed, hmm); I suspect I'm going to have to do something more substantial. I could go with an I2C potentiometer, perhaps. Or up the frequency of the PWM and drive a MOSFET. Or I could find the I2C D-A converters I've got buried somewhere in the shop, and hope that I've got two of them.

But I have doubts about this whole setup: this year's LIWhoCon is fast approaching, and I just cast off (as inappropriate) or blew up (whoops) much of the internal circuitry that I was relying on. I've just put my last RFM12B on my last Uno, but maybe it's time to work smarter and not harder.

Given the work that [Drew Dibble] did reverse engineering his hoverboard - and given that it looks identical to what I'm disassembling - perhaps I can use the built-in controller and his 9-bit serial control code. Which would mean moving to a 3.3v controller instead of an Uno.

The Moteino is 3.3v, and includes RFM69s. I have a number of them knocking around. The down side – there's always a trade-off – is that I'd have to rebuild the Wii controller, too. Frankly these all sound like second-generation improvements, and maybe it's a good time to move in that direction; smaller, eats less power, uses better RF, utilizes the controller board I *do* have...

Hello, Amazon? I'd like yet another Wii Classic knock-off controller, please.