submicron-scale patterning of silicon and dielectrics

Every click-baity video starts with the final result, so here goes (not my achievement!):

RIE isn't closed-loop and ultimately it's practically impossible (think: SEM + Cl2 gas jet, super slow etch rates, https://aip.scitation.org/doi/abs/10.1063/1.3525587 ) to make plasma etching a maskless process. I could ignore shallow surface damage and ion implantation for my purposes but I like to avoid it if possible. Here's what that looks like:

Chlorine on its own or in Ar has a tendency to photo-dissociate at visible wavelengths:

With a bond dissociation energy of 242.58kJ/mol (2.515 eV/bond) plus (I'm guessing) some additional energy to end up in an excited state the molecular absorption peaks in the UV, capable of causing localized generation of chlorine radicals.

Our goal here is to generate volatile silicon tetrachloride (cue youtube video from NileRed on its conventional synthesis with heated silicon). For this to happen, chlorine radicals must be generated in the vicinity or on the surface of the silicon specimen to be etched and be willing to react with the silicon atoms presented at the wafer surface.

Seriously, Si has to react with Cl. radicals or worse... and there's where the problems start.

"It was found that n+ poly-Si is etched by chemical reaction with Cl radicals photodissociated in the gas phase, while undoped and p+ poly-Si cannot be etched without irradiation by UV light. The primary effect of the photoirradiation is to produce electrons arising from electron-hole pair generation. The etch rates, etched features and etching products depend strongly on the electron concentration in the conduction band. The experimental results are explained by assuming that electron-attached Cl- ions penetrate into the Si lattice."

Since I'm interested in selective backthinning of p- substrates this is not going to be as easy as swapping the samples holder for a gas tight process chamber and iterating between surface profile measurements and exposure phases to achieve a controlled 3D profile.

It's not as bleak as it might look from the 1985 point of view. in fact, Vakanas 2002 states (also refering to the patent below),

fast forwarding a few years there appears a behemoth called the VarioEdit
(as seen in Henderson 2013 https://linkinghub.elsevier.com/retrieve/pii/S0026271413001893 and https://www.varioscale.com/varioedit ): there are a few more juicy pictures of macroscopic terraces etched into thick wafers, so this really is a thing. Unfortunately there only seem to be one or two pictures showing the machine so it's doubtful anyone out there really owns and operates it (or they're not allowed to talk about it, exception: https://govtribe.com/project/j-annual-maintenance-of-the-varioscale-varioedit-laser-assisted-chemical-etching-lace-system).

There's a project which matches the capabilities of VarioEdit:

"Intel plans to ship 10 nm integrated circuits in 2017[3], and TSMC plans to offer 7 nm chips in 2017. [4] Manufacturing at these technology nodes will require high-speed and high-resolution image acquisition for process verification and failure analysis.
The RAVEN program is focused on developing an analysis tool capable of imaging minimum size circuit features on a silicon integrated circuit chip."

"Officials of the U.S. Air Force Research Laboratory at Wright-Patterson Air Force Base, Ohio, announced a $23.8 million contract to Varioscale earlier this month for the Rapid Analysis of Various Emerging Nanoelectronics (RAVEN) project."

ok, enough with the tinfoil hat stuff, back to facts from the 2002 Vakanas paper: 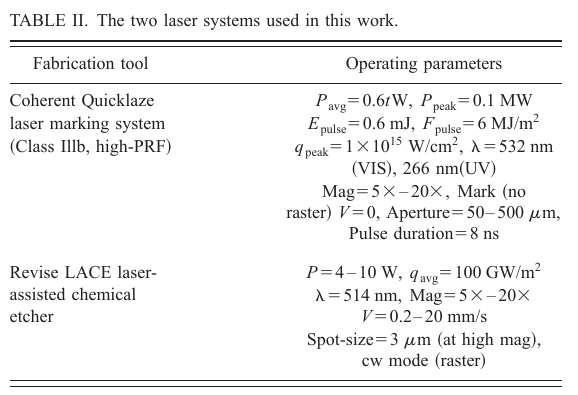 Seeing the wavelengths and power densities I'm really not so sure anymore ;-)
But now you've seen the name and recognize it on this lecture slide.

sorry for missing your comment. Maskless lithography is still going, and I'm waiting for parts to give LACE a shot someday with beefy laser diodes (not necessarily with Ar*).