This robot moves vicariously for a laboratory mouse while its brain is imaged by a microscope!

Servo motor control is usually implemented with an embedded MCU as typically very fast, consistant control loops are required for real life motion controls. Programming, capturing data, and PID tuning can be tedious in an embedded system environment. So in this notebook we will be examining raspberry pi zero loop stability while controlling a brushed, dc motor.We will be testing the loop timing under different conditions:

Because this platform is ultmately being developed for a raspbery pi robot with a live video stream using gstreamer, I will test the loop time both while the raspberry pi is streaming and not streaming video. A total of 8 tests were performed in a variety of combinations of the above conditions. Those conditions can be seen in the table below: 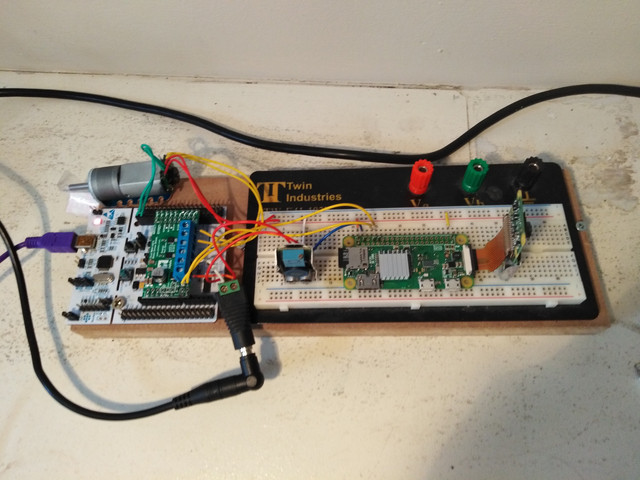 The running time is almost 10x greater spawing 5 of the threads! This greatly affects controller performance. According to 'top' this program was occupying 85% of CPU overhead. Although even single threaded tasks seem to occupy this much overhead.

Two threads (which we will need) has much better loop time although the CPU overhead is still comparable.

I wasn't thrilled with the update rate of the control loop, and the amount of processor overhead, so I tried overclocking the pi from 700 MHz to 800 MHz