The main link for the PCB Making: https://jlcpcb.com

Since every body noticed the high speed evolution of robotics technology, we decided to take you guys to a higher level on robotics and robot making. we started a while ago by making some basic electronic projects and basic robot like PICTO92 the line follower robot in order to make you a bit familiar with the electronic stuff and find yourself able to invent your own projects.

Hey guys! Here is a new tutorial to guide you step by step while making this kind of super amazing electronic projects which is the "Crawler robot" known also as "Spider Robot" ou a "Quadruped robot".

Since every body noticed the high speed evolution of robotics technology, we decided to take you guys to a higher level on robotics and robot making. we started a while ago by making some basic electronic projects and basic robot like PICTO92 the line follower robot in order to make you a bit familiar with the electronic stuff and find yourself able to invent your own projects.

Moving to another level, we've started with this robot which is a basic one in the concept but it will become a bit complicated if you get deeper in its program. And since these gadgets are so expensive in the webstore we provide this step by step guidance to guide you guys making your own Spiderbot.

This project is so handy to make specially after getting the customized PCB that we’ve ordered from JLCPCB to improve the appearance of our robot and also there is enough documents and codes in this guide to allow you create your crawler easily.

We've made this project in just 7 days only, just two days to finish the hardware making and the assemble, then five days to prepare the code and the android app. in order to control the robot through it. Before starting let’s see first

What you will learn from this tutorial : 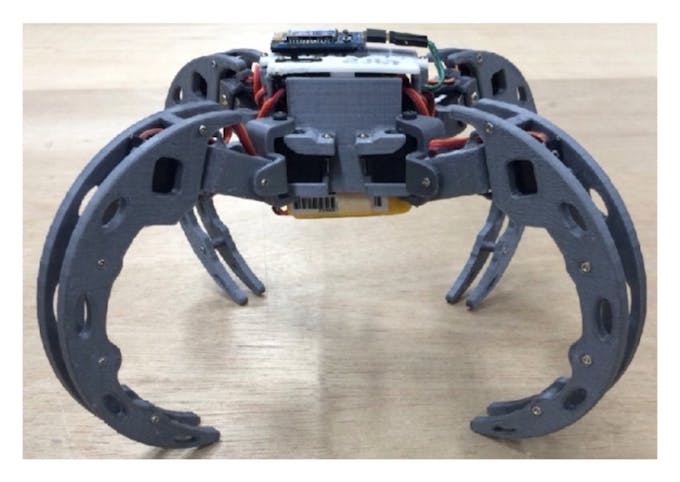 As its name defines it, our robot is a basic representation of the sipder movements but it will not perform exactly the same body moves since we are using only four legs instead of eight legs.

Named also a Quadrupedrobot since it has four legs and make its movements using these legs, the movment of each leg is related to the other legs in order to identify the roboty body postion and also to control the robot body balance.

Legged robots handle terrain better than their wheeled counterparts and move in varied and animalistic ways. However, this makes legged robots more complicated, and less accessible to many makers. and also the making cost and the high depenses that a maker should spend in order to create a full body quadruped since it is based on servo motors or stepper motors and both are more expensive than DC motors that could be used in wheeled robots.

You will find quadrupeds abundant in nature, because four legs allow for passive stability, or the ability to stay standing without actively adjusting position. The same is true of robots. A four-legged robot is cheaper and simpler than a robot with more legs, yet it can still achieve stability. 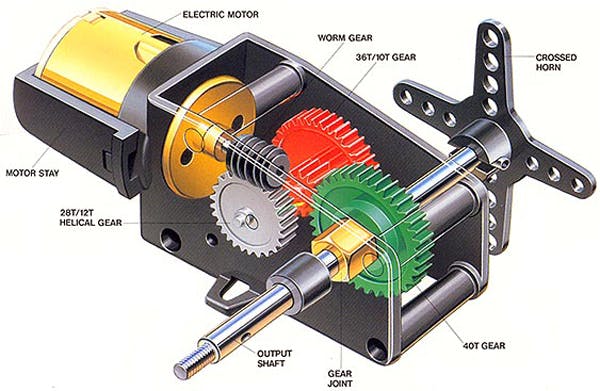 A servomotor as defined in wikipedia, is a rotary actuator or linear actuator that allows for precise control of angular or linear position, velocity and acceleration.[1]It consists of a suitable motor coupled to a sensor for position feedback. It also requires a relatively sophisticated controller, often a dedicated module designed specifically for use with servomotors.

Servomotors are not a specific class of motor although the term servomotor is often used to refer to a motor suitable for use in a closed-loop control system.

Do you want to build a Robot that can walk dance and sing for you! Then this is the ultimate guide that can help you through.
Project Owner Contributor

How to Make a Walking Robot

We established this project in order to perform some Robotic skills. PICTO92 is a mobile line follower robot
Project Owner Contributor