Waves of Dits and Dahs in a Tether Sea

Have you ever seen those scenes in films where a Coast Guard helicopter lowers a rescue hoist to rescue somebody, and the rescue swimmer sends hand signals to the flight mechanic operating the hoist to lift the rescue basket? If it's too dark to see, they might use radio or wave a chemical light. But what if the radio was down and visibility was still too low? Could the flight mechanic, with a gloved hand on the tether, feel the signals? Divers have done this for over 100 years, as they had to deal with low visibility conditions without radio contact and use various line (rope) signals to physically pull the tether to contact the line "tender", who pulls back, often including some sort of handshaking protocol for error correction. But what if the hoist operator was a machine, or even a spaceship, and not a human being?

First, please let me clarify that, at this time, THUMP is in no way suitable for critical emergency situations.  It is an experimental subsystem that I built to communicate and control a small, solar-powered, self-propelled, tethered robotic radio platform, in cases where its primary radio systems go down.  But such a system could be applied to a variety of different types of craft, and building it has provided fascinating insights. 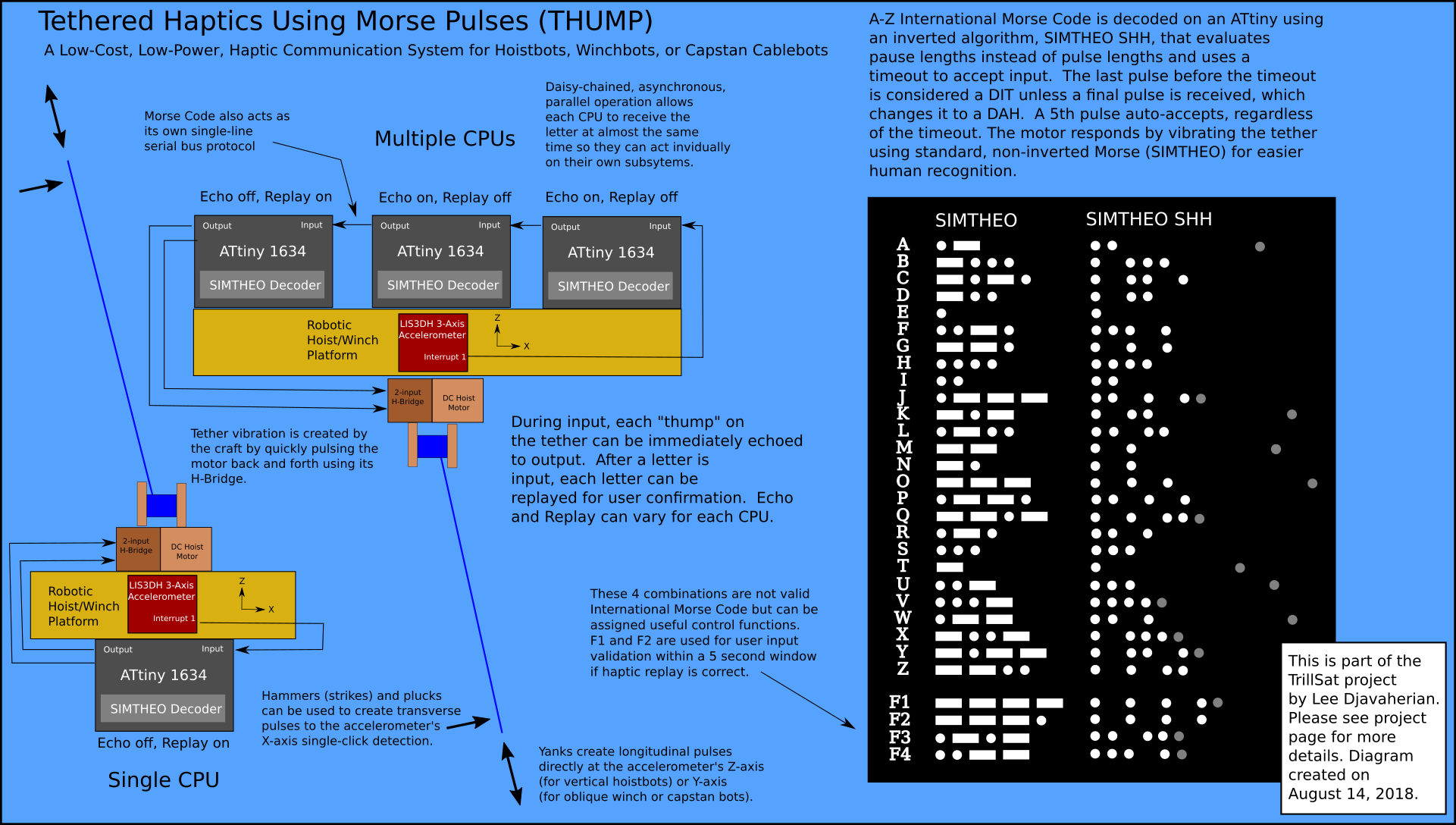 THUMP is a low-cost, low-power system that uses a subset of International Morse Code for the full A-Z alphabet.  And instead of only hoisting something up or down, as in the helicopter/diver example, robotic hoists can also be inverted, anchored at one end, and the hoist platform itself can be instructed to move up or down (a vertical hoistbot, or a horizontal/oblique winchbot or cablebot) turning it into a tethered flying, or even submersible, craft.  THUMP requires only a 3-axis accelerometer interrupt for sensing and uses the hoist/winch motor for haptic pulse generation.  The operator simply "thumps" the tether (hammering, plucking, or yanking) to instruct the robot to move or perform any desired function within its capabilities, and the machine vibrates back a response.  A resource-efficient Morse code algorithm and decoder was created for an ATtiny microcontroller, which can also be daisy-chained to multiple microcontrollers for asynchronous, parallel operation in more complex cases where different CPUs control different subsystems (which was the case with my prototype).  It creates its own serial bus protocol (using Morse, of course!) and has zero reliance on other protocols, which is nice.

Ebb and flow, flotsam and jetsam, dits and dahs...  A traditional hoistbot with a winch and take-up reel is kind of like a helicopter, but TrillSat is a little different.  It's an oblique capstan-driven cablebot, anchored at both ends, that sails, on what I like to call, a "tether sea".  When using the tether for capstan locomotion, the craft acts like a buoyant ship or airship on a medium, but when the tether is used for Morse code communication, THUMP shows that the tether really is a distinct medium.  Think of the armed forces of different countries, for instance.  They are usually divided into mediums or their absence/combinations (land, air, water, and maybe even space).  And even in space, both end-over-end rotation and "gravity-gradient stabilization" can keep a tether taut, and because the tether is the medium, a gas is not needed for wave propagation. Each medium has unique characteristics that have to be understood, and the tether has unique characteristics.

And, interestingly, many of these characteristics have been understood for centuries, since a simple 1-dimensional tether, anchored at both ends, form a vibrating string which has provided musicians, mathematicians and physicists a simple way to discover and study WAVES.  And the corpus we have on this subject is immense (and a joy to research), but I do not claim to be an expert.  Waves are hard, even for musicians to master, and much of our academic understanding lies in the oscillating, dynamic world of differential equations.  I'm neither a musician nor a physicist, but I do have a good grasp of logical information processing, and so I use my discrete tools, as best as I can, to bound and observe those wiggly, squiggly things.

IuT voltmeter for a breadboard

Hackaday Prize 2019
Adapting an existing code base used for music transcription and spectrum analysis to forecast the near exact time of a major earthquake.
Project Owner Contributor

Stalking the Big One