Most FPGA projects will have at least one state machine. Learn how to create these powerful little dedicated CPUs in your designs.

Here is the place to learn FPGA

On a CPU, you have some kind of software to tell the machine what to do. For FPGAs, all but the simplest circuits use a state machine. The idea is simple: some state variable tracks what you are doing right now and various stimulus like inputs or time cause the state variable to change. It sounds simple, but there's a lot of details to get right. And depending on your design goals, there's plenty of ways to produce a state machine.

As usual, we will focus on the practical and build state machines using Verilog. And, once again, we'll rely on the EDA Playground online simulator, although you can use another Verilog simulator like Icarus if you prefer.

A state machine is a bit like a Rube Goldberg contraption. Something happens, which causes something else to happen, and so on. One of the first state machines I ever saw was made with timing motors and poker chips. A ringing phone would start the motors and the poker chips would push microswitches to start a tape player, then a tape recorder, and it made a crude answering machine. Our FPGA-based state machines will be more flexible and not quite as  kludgy, but the principles will be the same.

Let's take a really simple example. Suppose you have a machine that puts air in car tires at a gas station. There's a compressor, a timer, and a coin slot. When a quarter comes in the coin slot, you start the compressor and the timer. When the timer expires, you turn off the compressor. That's pretty simple, and you could probably do that with just some ad hoc logic. However, it could be a state machine. You'd only have two states: Off and On. When you are in the off state, you watch for a coin. When you see one, you go to the On state, turning on the compressor and the timer. Then you watch for the timer and when it fires, you turn everything off and go back to the off state. 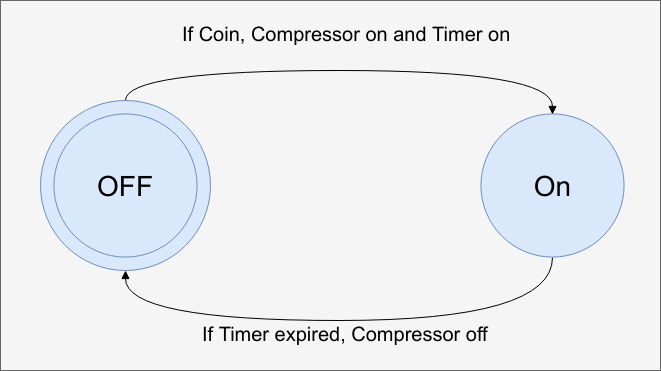 You might think that example isn't very useful, but consider this: What if next month, the price of air goes up to 75 cents and the coin slot will tell you if you got a quarter, a dime, or a nickle? Now it is harder to change an ad hoc design. What if while in the on state, the customer can add more coins to get more time in proportion to the coin they deposit? These would be easy things to handle in a state machine-based design.

You might think this is very different than using a CPU, but if you think about it, a CPU is just a very large state machine itself. Each instruction causes it to do different things depending on inputs and the previous state. Very few of our state machines will be that complex, though, unless you are building a CPU.

For this bootcamp, we'll assume you understand Verilog and the fundamentals of FPGAs. If not, you are in luck, because this bootcamp is part of a series:

If you aren't comfortable with the basics, you can check out those bootcamps first and then return to this one when you are ready.

To start, look in the step-by-step instructions to learn about state machines with some hands-on exercises. You'll also find background articles in the project logs. You might want to browse them first and refer back to them as you work through the steps. The logs also have a glossary you can check for any unfamiliar terms.

Build a Turing machine based on TMD-1 but with support for more states and symbols.
Project Owner Contributor

Develop a Turing machine that is simple to program and easy to understand.
Project Owner Contributor

Knickknack does not do much right now ... but who doesn't have an item or two of little value ...
Project Owner Contributor