In 2018, I had two bitter crashes which hurt me plenty. As a result, my front left motor broke some time later. A spring shim got damaged that reduces axial slack inside of the motor. It split into pieces (two of which I haven’t even found, yet) and shorted out one of the hall sensors and then started filing away on the motor enclosure spreading fine aluminum dust everywhere.

Long story short, my board was down for a year because I couldn’t decide if I want to shell out $100 to repair the board as it already had 1000 miles on the clock, or if I rather salvage the parts and build a new custom one.

I finally decided to pull the broken motor out and take it as far apart as possible to better understand what happened to make sure it doesn’t happen again on any of the other motors.

I cleaned everything up, removed all the dust and dug a little deeper… 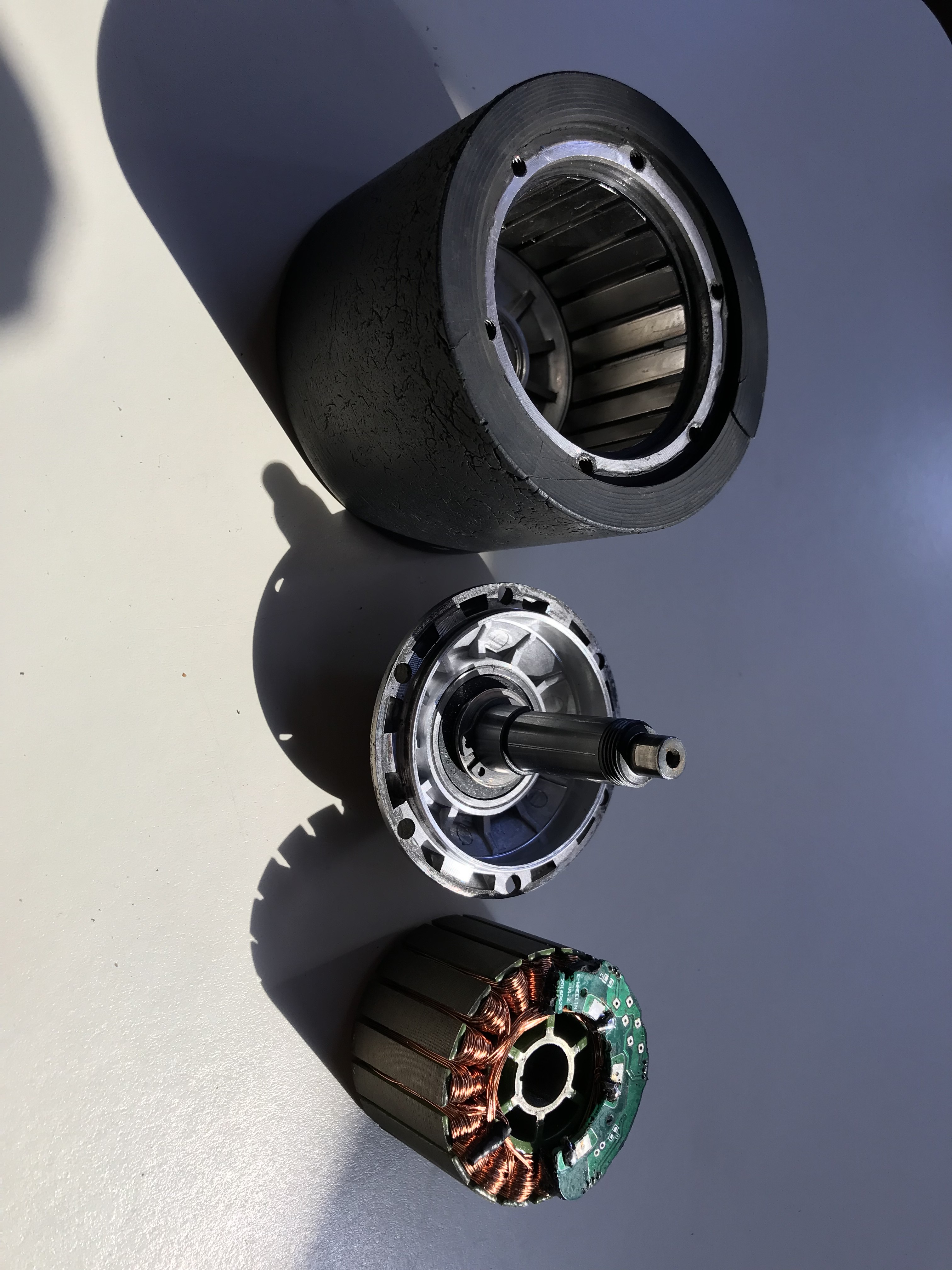 Here is where the shim got stuck after tumbling around inside of the enclosure. It shorted out the hall sensor on the back side of the PCB. I assume, since it’s an open collector output on the hall sensor side that it shorted to 5V and didn’t survive the process. 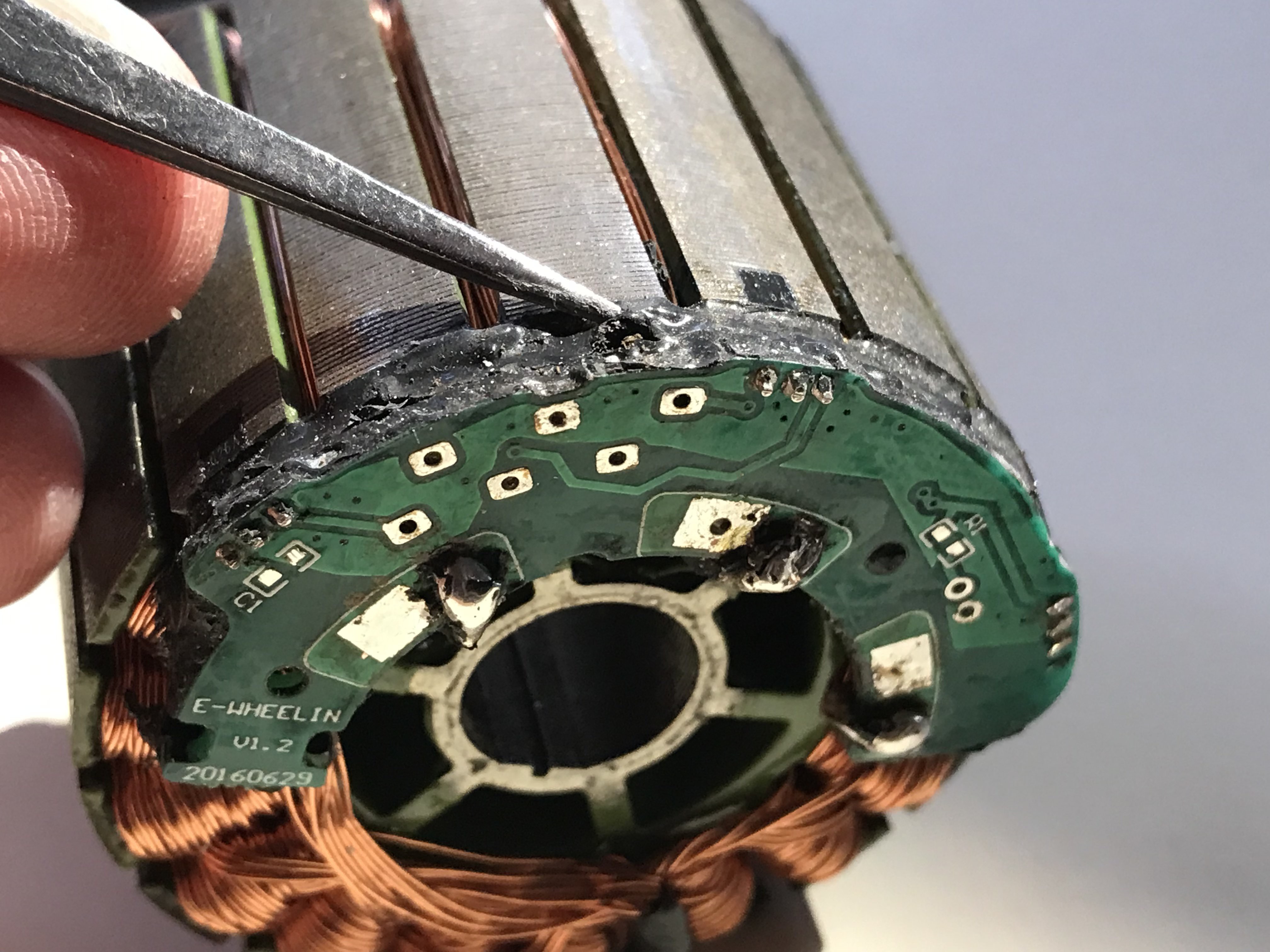 Taking some quick measurements revealed my fear, the hall sensor was dead and only spit out a constant floating level around 3.2V instead of sharply triggering a pull-up resistor against ground.

Now that I knew what the issue was, I was reasonably confident that this was a one of issue that should not usually happen. I inspected the broken spring washer again and apart from it snapping into pieces, I didn’t see any signs of wear. It wasn’t ground down or anything, it just looked like it snapped. Honestly, I wonder if it was ever in one piece.

I contacted Acton and asked for a used motor as a replacement. They did have a good used unit but highly recommended not only swapping out one motor. I did not immediately understand why that would be an issue but here we go:

Most electric skateboards use a torque controller to drive the motors. You simply use the throttle to define how much torque the motors should put out. If one of the motors works a little more than the others, no big deal.

The Acton Blink Qu4tro uses a speed controller. Both axles (individually) control the revolutions per minute, the speed of the skateboard. This can be a problem if one wheel has a larger diameter and hence circumference than the others. It would rotate slower at the same speed. So in order to speed control that wheel to the same speed the controller would attempt to increase that wheel’s speed to the desired / user requested speed. However, since it’s ALWAYS forced to rotate slower due to its larger size, it can never reach the same speed but will always try. This might cause overheating of the controller as well as the motor. Acton told me, customers had this issue before and expressed they were very unhappy about the new motor burning out for no apparent reason.

To prevent this from happening, I asked them to precisely measure the diameter before shipping the motor to make sure it matches my motors. Turns out, it did. So I decided to risk it. The difference is in the sub 1% and that just can’t be that bad. Or can it?

I went ahead and installed everything: 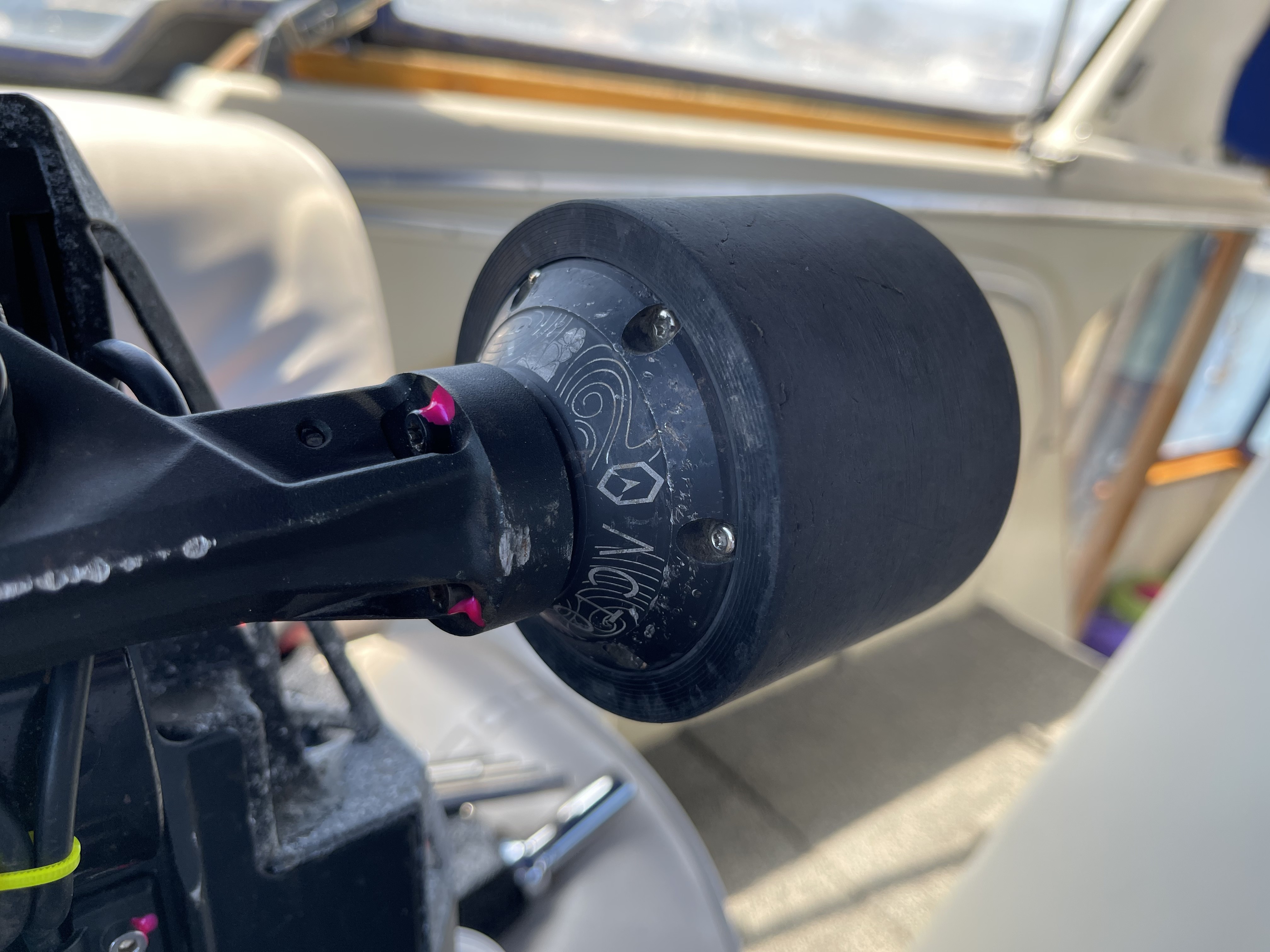 It should be noted that my skateboard did a lot of miles next to the coast line with salt water splashing all over the bicycle way. The painted front and back parts of the board did not take that very well. But it’s still metal. So it’s probably fine… Nothing I can do about it.

I secured every single screw with 243 Loctite. Acton recommended using stronger thread locker than that but that’s what I had. To make it obvious whether a screw comes undone by itself I added torque stripes using my ladies nail polish. I learned this in automotive when working on prototypes. Very very useful and easy to check. Turns out, this already revealed a loose screw from a different motor on my board that wasn’t screwed in all the way. The nail polish was cracked and therefore an obvious warning sign that required immediate fixing.

I’m happy to report that several batteries later, that all motors show very even heating and zero issues so far. I still love this board. So insanely powerful when you want it to be… but wait. Maybe you don’t always want it to be. Let’s talk about that next.