An artistic display of a psuedo random number generator that will never* repeat, done in discrete logic.

The Forever Number is a artistic wall hanging with 242 LEDs showing random** numbers in a constantly cycling display. The numbers are displayed in a 22 by 11 pattern. The two sided nature of the piece separates the individual elements from the wiring that brings them together in function.

The work is named "The Forever Number" because it will never show the same pattern within the current time scale of the universe*. The comparison was incorporated into the name of the piece in order to give a better sense of scale of the numbers involved.

The circuit is in a two sided frame to view the components on the front as well as the colorful and patterned wiring on the back. The power socket and potentiometer are embedded into the frame side.

I was inspired to create this work by a confluence of four events.

I had recently come across a discarded LED exit sign, made of individual 5mm red LEDs.  They were easy to unsolder and I pondered for awhile what use I could put so many to.

A little earlier I had come upon a tube of DIP 74LS164 parallel out shift registers.  Unlike the more common 595 shift registers, these do not have an output register, so the outputs show the shift register bits directly.

The project first found form from a rewatch of "War Games".  Ever since seeing the movie, I found the scrolling random pattern on the side of the WOPR super computer mesmerizing.

The project found meaning from the relatively recent discovery of the accelerating expansion of the universe.  I had recently learned about Linear Feedback Shift Registers and knew how well they could scale into massive numbers.

The core of the circuit is a Linear Feedback Shift Register.  The 242 bit shift register is driven by an XNOR linear function of the current state.  This forms a psuedo random number generator.  While the output passes a number of the attributes of a random number, it is not truly random because it is repeatable and even reversible.

A LFSR has a length, a number of counts in which it repeats.  At the speed this circuit runs at, and the length of a 242 bit LFSR, it would have still not repeated it self if it had been started at the beginning of the universe, 13.7 billion years ago.  So while mathematically it will repeat,  even at the scale of the age of the universe, it will not. (ignoring the fact that the circuit will fail long before that)

When the accelerating expansion of the universe was discovered in 1998, we went from believing we were in a universe which had a time limit, to a universe which did not.  I found the interplay interesting between that and the idea of a random number which never repeats, but mathematically will.  There is a duality of infinite and finite in these concepts that I think brings meaning to the work.

The entire design is done with discrete logic gates, LEDs and resistors.  It runs on a single 5V rail.  As the LEDs can all be on at the same time, current can be as high as 1.5A.  Given the random nature of each bit, most of the time the current will be half that.

This shift register is made of 31  74LS164 shift registers, each device cascaded into the next, with a common clock to all devices.  The parallel outputs of the shift registers drive the LEDs directly.  That is, this is not an LED matrix; there is no scanning or microcontroller driving them.

A 74S86 XOR chip is used to form the feedback function, with it's output passed through a 74S04 inverter to function as an XNOR.  Extra gates in the 74S04 and 74S86 chips were used as buffers for the clock.

A 555 timer circuit is used to clock the shift registers allowing a user adjustable potentiometer to change the clocking speed from about 0.5Hz to 20Hz.

The output pins of the shift registers go to the LED cathodes, while the LED anodes pass through a 470 ohm resistor to the 5V rail.  Most of the resistors are in DIP resistor networks to save space.

An intentional part of this work was to wire it not by making a PCB, but by creating an interesting pattern in wire wrap circuit construction.  This circuit has an estimated 1500 connection points, all done without solder. 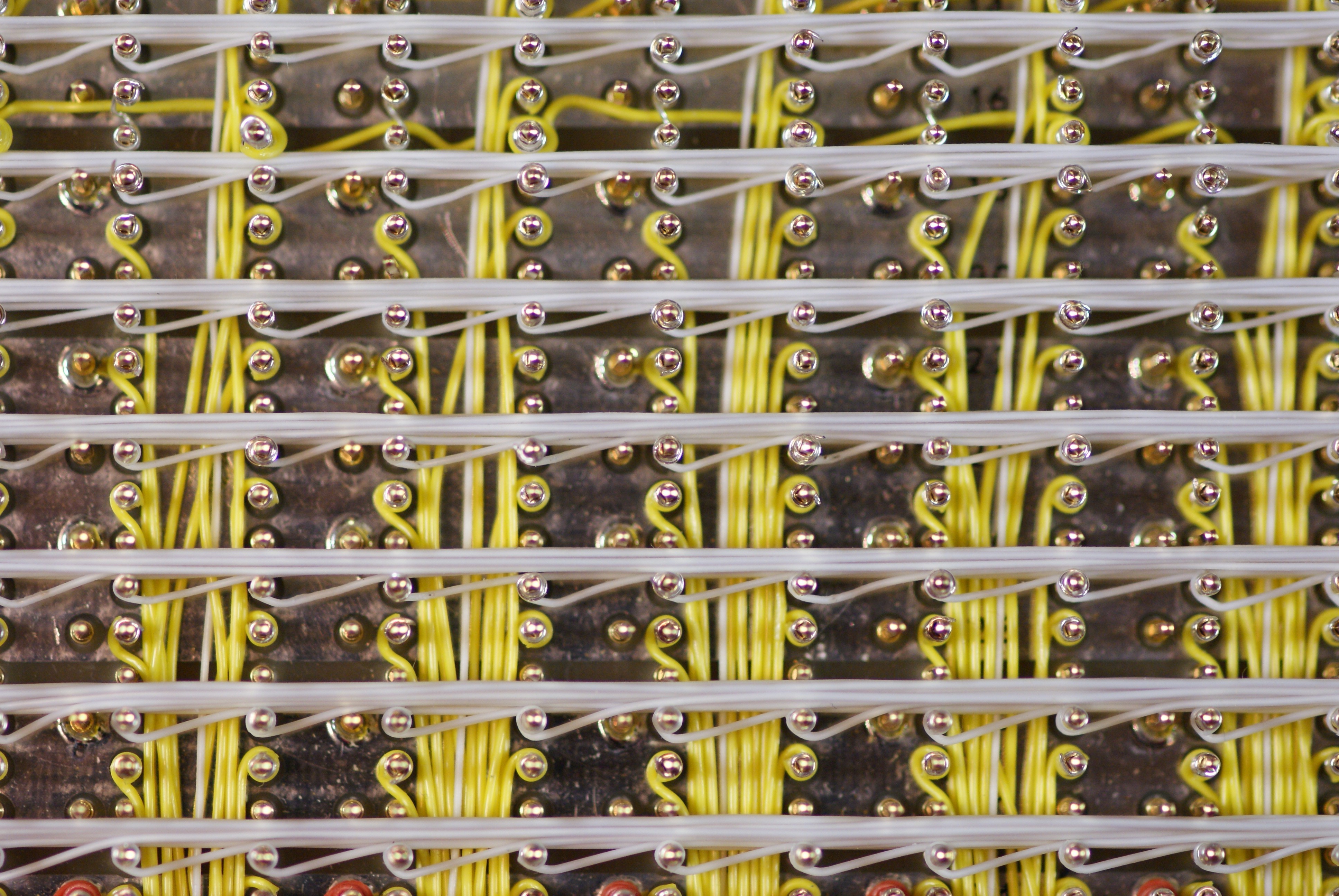 The base PCB is a special kind which was manufactured...

Thanks for the link to Table of Linear Feedback Shift Registers - very useful.

I've just wrapped a 16-bit LFSR driving a LED matrix, which suffers from variable brightness - which I expected - and a very regimented, "dancing blocks" display which I did not.

I was struggling with the schematic. This is not a Galois LFSR but a Fibonacci LFSR since the xor of the taps is only fed to the entry point.

Hi @Arduino Enigma Yes, you are correct that the xor output only feeds the entry.  I did this because it meant it would be much easier to change the taps, and to create the constant scrolling look reminiscent of the WOPPER.  If you insert the taps in the middle of the LFSR, that visual pattern would be broken at every point there is a tap, but this certainly can be done if you'd prefer.

I'm sorry the schematics are not very clear.  I originally built this without any schematics, and only drew them much later in order to put the project up here.  Is there anyting I can help with?

No, great project, still considering how to do a fritzing pcb...

I figured that the galois will introduce a discontinuity when it changes the bitstream mid-point, suspected you were building a 4 input xor from 3 2-input xor., but seeing the wikipedia schematic confirmed it.

I just implemented this program for the seven segment art installation hardware. its visually jarring, will post a video and code later...

It looks best when initialized to random values before the shifting starts...

And here is a video of the Fibonacci LFSR. The bits are introduced at the top left and scroll right and then down one line.

This is brilliant and I just have to make one for myself!  Are you planning to release more details about the actual schematic?  Thanks you for the inspiration!

Thank you, and I'm so glad that it could be an inspiration! That is one of the things I love about this site, it is a great place to get and share inspiration.

Regarding additional information, I was thinking about including a simplified schematic. Is there anything else you think would be helpful to add?

The simplified schematic would be fantastic especially if it includes the various cap and resistor values you used. I'd also like to see some complete and detail pictures of that beautiful wire wrapping you did on the back.  Thanks again!

Hi @Mel I have added schematics including the R and C values at the end of the project description.  For detail pictures, most of the pictures shown in the gallery are 10Mpix, so if you look at them full size, you can zoom in wherever for more detail.  Hope that helps!

Pretty front and back. A work of art.

Thank you!  I have always admired nicely done wire wrapping.

A digital 24 hour clock using only relays and diodes for the counting logic.
Project Owner Contributor