The House Of Fun

For many years I've dreamed of a lab. Not just any lab either, since I was a child I've had dreams of a life denied me by circumstances beyond my control. Not Fame and Fortune like other folks tho I guess.
Things around me have a habit of happening though, I dont know what it is. I can be pushing in a completely different direction, unaware fate has a kick up the backside for me, and those dreams come true in a sideways fashion. This is no exception...

Apparently its not obvious what use I intend for my latest venture.

And a protest of sorts, it could be backscaled for the homeless to sleep in, a point on which I do take issue. This is the 21st C, and we have families begging on the streets while the rich find yet more ways to tax them, and step over them in distaste. Thats not all they do. A MorningStar Shelter is urine-proof and fire-proof. And sturdy enough to prevent casual theft of belongings or injury from casual violence.

<rant>Sorry to tell you, Theresa, but you're about the worst PM in our history, and we've had some d*ks, whats your problem hmmm? Do us all a favour and GO HACK YOURSELF. </rant>

I want to be a super-hacker, MUAHAHA! ;-) I get called all sorts of 'orrible things by stupids. Its because they have no frame of reference for me, and people always reject enigma on principle. Fair enough, so I'll give them a frame of reference, walk around in goggles and broadcast from my capsule like any YouTube superstar ;-p Watch this space.

What would you do with a pile of cardboard belonging to the Government. Burn it? Fly Tip it?

Not the most obvious choice of building materials for starters, but it was prompted by circumstance, and as usual arrived in the form of a joke. Having just moved house enabled me to again have a workshop in my garden after 5 long years of my stuff in storage. Part of the deal included said workshop, but typically Igor is giving me hassle over this. He paid for the move, and thus the deposit on the cardboard boxes - which I should return to the movers if he wants the deposit back.

'Igor' is a Manager of Social Services, and knows full well his department owe me this, but he's being difficult about paying up. So no little workshop for MorningStar. Bummer.

Seeing as the deposit is my favourite sum of twenty quid, coincidentally the largest amount of money I am allowed to earn in a week under Social Security regulations, to say he's not getting that back has a probability of one. Possibly more, but you'll have a hard time proving it without a crowbar.

Now I wont claim the idea as mine. Someone here may have said it, but a little voice said 'Make one out of cardboard, ho ho.'

Well I love art even more than a good joke, and nothing pleased me more than the idea of Igor commissioning and paying for a jumbo piece of artwork, whether he likes it or not.

It wouldnt be the first time XD

I should point out here I am also prevented by regulation from building anything extensive, like large greenhouses, sheds etc , and have been allocated a little regulation patch of regulation paving stones big enough for a six by four shed as well. Quite what regulation makes a paving slab 450mm/17.5in eludes me at present. I mean it looks big enough for a decent shed, but they'd all overhang the edges significantly in practise.

Its a thought, but no.

It would have to be smaller on the outside than it is on the inside.

Technically what I'm doing is making a giant round cardboard box. A carton is even more temporary than a Marquee, which could in theory occupy my entire back yard for an undefined period under the regulations governing use of the land.

And there are no regulations governing a MorningStar, unless I make them up.

Well, after a bit of kicking the idea around, it kind of evolved. A waterproofing skin on the cardboard both sides prevents it from picking up moisture, and in my case also doubles as a Faraday Cage. I'm using tinfoil, as a tip of the tinfoil hat to my lords and masters besides a useful addition to any laboratory.

It's going to look the part when it's done, thats for sure. 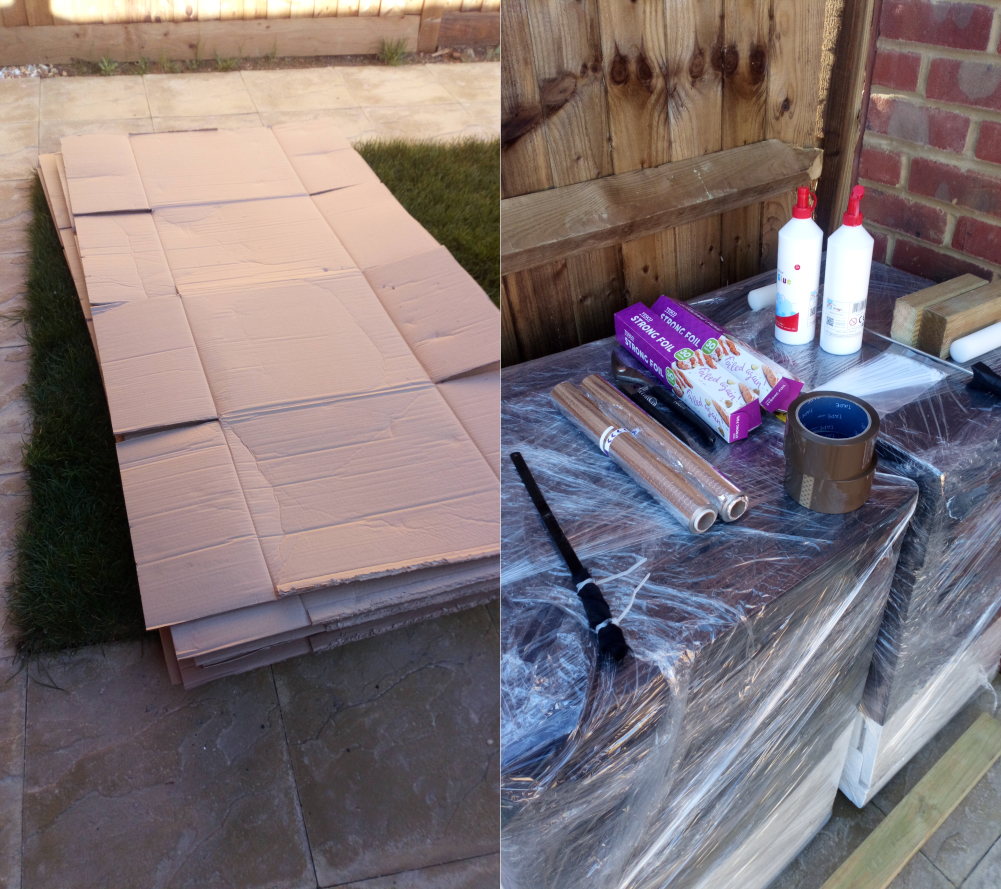 Art, function and a world where dreams will come true :-)

Welcome to the Age of MorningStar XD

I'm totally not getting what this is all about.

But it sounds like you are having fun! So best of luck on lab build.

Ahhh, Madness, an old favourite :-D
But condoms? I'm not sure what you think I'll be doing in there. All Night. Online. Pay-Per-View. And there was me considering a Patreon. ;-p

So try the House of Fun

Its quicker if you run

This as a chemists, not a joke shop

XD Thanks Stu, you've given me some earworms in your time, but I actually woke up with this one today. OK so you get to name this one, but there will be retribution if I ever get in trouble for vulcanising rubber in there.

Man walks into a chemists, and asks for Pyrex.

He leans forward conspiritorially. No, he whispers, Pyrex, I've got some really hot stuff in the car.