Anything to do large scale agriculture and horticulture

projects which are bee-related!

The device is based on the Cicada (LoRaSensorTile) available at Tindie but redesigned to reduce size and lower cost. Gone are the buttons and USB connector, the battery charger and LDO. The device is powered directly from a 3V coin cell battery. The device is still programmed using the Arduino IDE and Thomas Roell's fantastic Arduino core for the CMWX1ZZABZ module (STM32L082 + SX1276) but instead of using the USB connector, an ST-LINK V2 is used to program the device via the SWD port on pins D8/9. Most of the peripherals (UART, I2C, SPI, analog pins) are still exposed on the board edge so the Bee Minder is extensible like its bigger Cicada cousin.

I am using a simple 82-mm-long, insulated-copper-wire monopole antenna soldered to the board for good enough LoRaWAN Tx. I haven't measured the range limit but judging from the RSSI signal it doesn't suffer much in comparison with the usual uFl plus whip antenna approach used on the Cicada. I had no trouble receiving data on the gateway from the device when I had it in my garage (~30 meters away); I expect the range to be at least 1 km.

The sensor suite is also changed from that on the Cicada. Instead of the VEML6040 RGBW light sensor, here are six channels of light sensing including UVA and UVB (VEML6075) as well as R, G, B and IR (BH1749). The BME280 is the same, providing pressure, humidity and temperature data. The BMA280 has been swapped for the lower-power BMA400 accelerometer. This is useful for detecting tilt changes (the box fell over) or vibrations (the bees are excited!). Lastly, the 16 MByte SPI NOR flash has been changed to the 8 MByte MX25R6435FZAI.

The design is specifically optimized for the lowest power usage. The average power usage depends primarily on the LoRaWAN Tx duty cycle; ten minute reporting interval costs ~25 uA. If the sensor data is logged onto the flash memory at a higher duty cycle, say, every minute with ten minute LoRaWAN Tx the average power increases to perhaps ~30 uA. More detailed testing is required to get more exact figures, but I would expect the 120 mAH battery to last at least four months.

I have been running one version of the Bee Minder on an indoor window sill for almost a month and this is the kind of data I am seeing on my CayenneLPP dashboard: 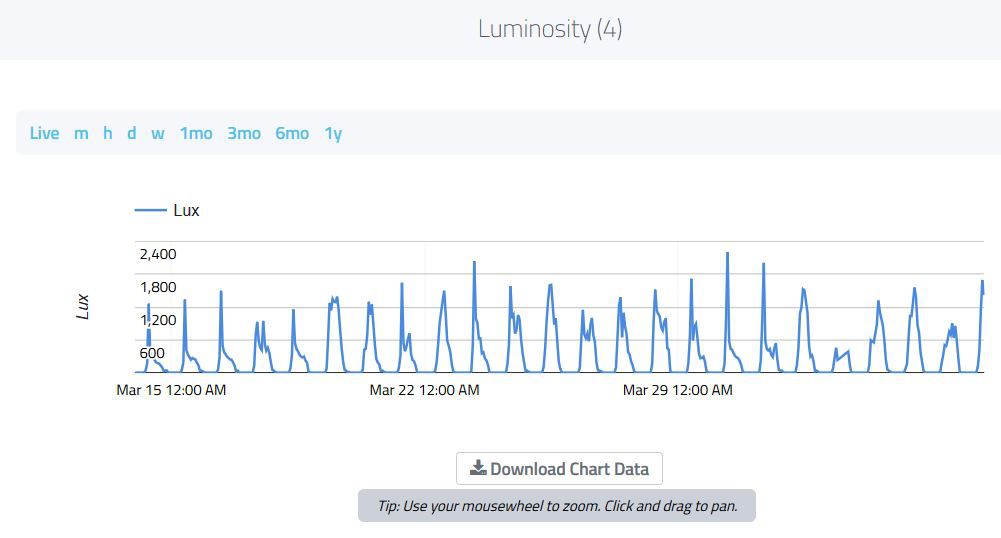 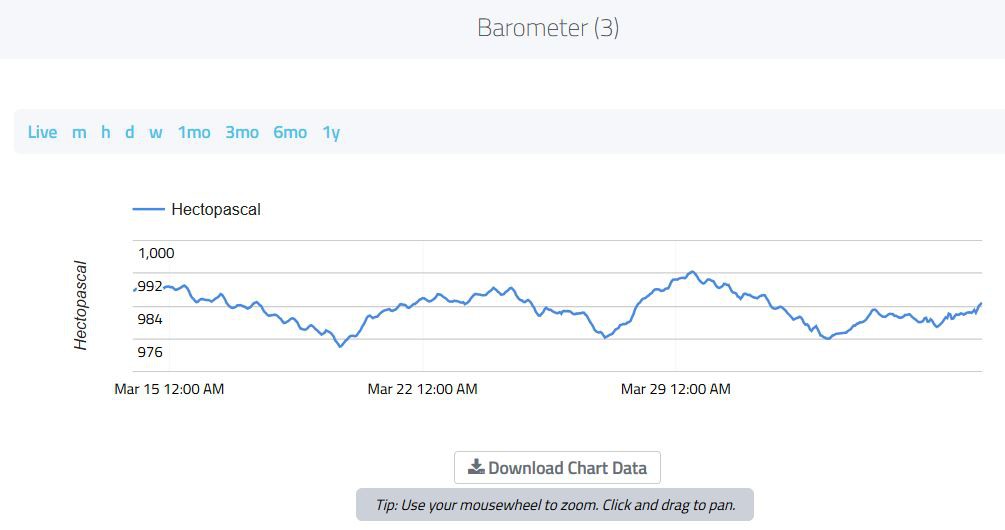 In addition to being extensible in terms of adding boards via edge connections, the design of the Bee Minder is flexible. I have designed another version with the BME280 replaced with the somewhat larger BME680 to add air quality to the sensor data suite. There really isn't a lot of room for adding additional sensors but swapping sensors is possible and straightforward (requiring another board spin). So I imagine this device could be customized by removing or swapping sensors for specific applications and/or to cut costs (i.e., replace BME280 with MS5840 for underwater environmental monitoring, remove light sensors for monitoring cave interiors, etc).

Beekeeper here ... why the UVA and UVB sensors?

Not a beekeeper here...the idea was to design in a poor man's spectrometer to keep track of the light level at different frequencies. This was designed as a general environmental sensor, not solely for beekeeping.

gotcha!  thank you! (yeah, it looks like it'd make a great weather station)
From a beekeeping perspective ... an enclosure will definitely be needed. I could definitely see the bees covering this module in propolis and covering the sensors ... that would need to be figured out.

Yes, a proper 3D printed enclosure design would be great but I don't have one. This is more of a concept board rather than a finished product, and bee hives are one of many applications I could imagine.

I will note that I exposed extra GPIOs for adding extras like load cells or off-the-shelf sensors, etc. So this design also serves as a development platform for solutions that can then be integrated into the small form factor, if desired.

The key attributes are small size and ultra-low power.

As a bee keeper (and having done some long-term bee logging as well) THIS IS AWESOME!!!!

I appreciate the feedback, unfortunately I haven't done much with this project lately except for measure the environmental conditions on my window sill and back deck!

I don't have bees but I do have a birdhouse...maybe I will instrument this and get some real world data with animals involved.

"Have you range tested the comms?" Only as far as the garage (~30 m) so far. I expect several hundred m at least, but TBD.

"Will you be providing a BOM and schematic in the future?" Probably, but not detailed design files. This is based on the Grasshopper (https://www.tindie.com/products/TleraCorp/grasshopper-loralorawan-development-board/) dev board which is open source, I just removed some bits (LDO and chip antenna) and added others (sensors, all of which I list). I don't want to give too much away in case this becomes a commercial product.

Very cool project! Have you range tested the comms? Will you be providing a BOM and schematic in the future?

Designing an IoT device to monitor and report the fill level of bins for holding recyclable discards of various kinds.
Project Owner Contributor

Small, connected device for smelling and hearing in any environment.
Project Owner Contributor