This is a project to create superhuman hearing for everyone, finally we too can get annoyed by parking sensors and listen to bats!

I've been interested for a while in the unseen and unheard world around us. Theres so much out there that our lowly human senses miss, both visually and audibly. I want to build a set of headphones that can listen to and convert more of the audible spectrum into a range that humans can access.

I propose the device will be able to listen up to around 100KHz, and dynamically transpose this entire range onto the human spectum of around 40Hz to around 17KHz, it will be built into a set of headphones to give stereo sound, allowing the user to basically replace his own ears, and will also allow for the location of a sound source.

Ideally you would be able to hear both "normal" sounds, i.e. speech, music etc, but have transposed on top the ultrasonic range that we can't hear.

I see this also being useful to listen to what your pets can hear, I wonder if there are devices in the home emitting sounds that are irritating to pets, but we are unable to detect them?

Built into a set of stereo headphones. 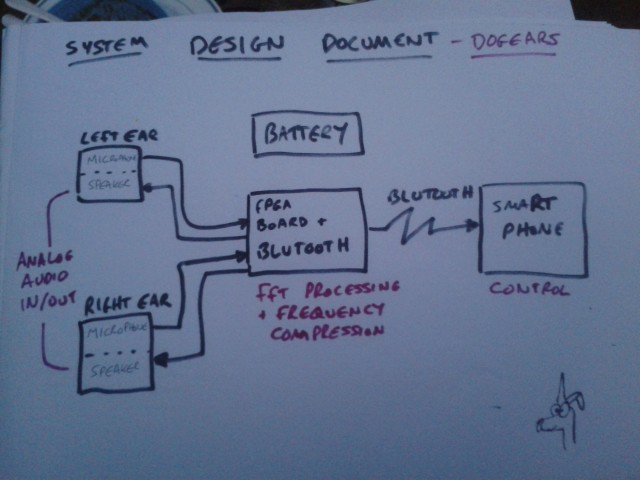 Wide Range microphone in each headphone 'can', orientated with the ear canal.

Digital processing to allow frequencies to be shifted, compressed and analysed.

As low processing delay as possible.

Connectivity with smartphone to allow settings to be changed, maybe to account for hearing loss, desired range to be captured etc.

"Pet" Settings, to give the user the experience of listening to the sounds their favourite pet can hear, e.g. Dog, Cat, Ferret, Tyrannosaurus Rex.

A large part of this project will be the Signal Processing software. The device needs to sample the ambient sounds, use FFTs to decipher the spectrum, then decide how to recreate the signal in a range that people can hear.  This isn't something I've played around with before, so should be an interesting learning experience.

I've also never done any smartphone programming, so this will also be a challenge.

There are already a range of bat detectors on the market, most of which use hetrodyne mixing to shift a portion of the spectrum, but these are generally handheld devices and most don't access the wider range of spectrum.

This is another step towards augmented humans, I forsee a future where devices like this could be implanted directly into people, giving permanent superhuman senses.  Another future device would be eye augmentation, I would love to be able to see into other spectrums.  As a RF engineer working in Broadcast, my dream would be to have a pair of glasses that could see RF being emitted.

Something I want to investigate with it is whether humans can be trained to use echolocation. I'm thinking the microphones can have a 3d printed cover to replicate the directionality of human ears, then with the addition of a couple of ultrasonic transmitters, it may be possible for people to use this to navigate in a dark environment.  That would be amazing to experience!

Another thought I had recently is to do a second version that could listen to RF... Basically an aural spectrum analyser, It would be amazing to listen to a bluetooth transmitter switch on for example, or in my day job as an Broadcast Engineer, it would be invaluable to listen for interference, or to see whether transmitters were working.  I imagine with experience you would be able to distinguish power levels, and maybe even tell whether it was transmitting correctly. We occasionally have problems where things like PAs fail , immediately you would hear a reduced level....

Adam Fabio wrote 07/07/2014 at 06:01 • point
Thanks for entering The Hackaday Prize! Looks like we have a couple of audio transposition projects entered. http://hackaday.io/project/1620 is similar - though not exactly the same as what you're going for! It will be great to see how both your projects come out.
Good luck - and keep the updates rolling in!